OPINION | PLATFORM DIVING: Message in new ‘Digimon’ film is that everyone grows up 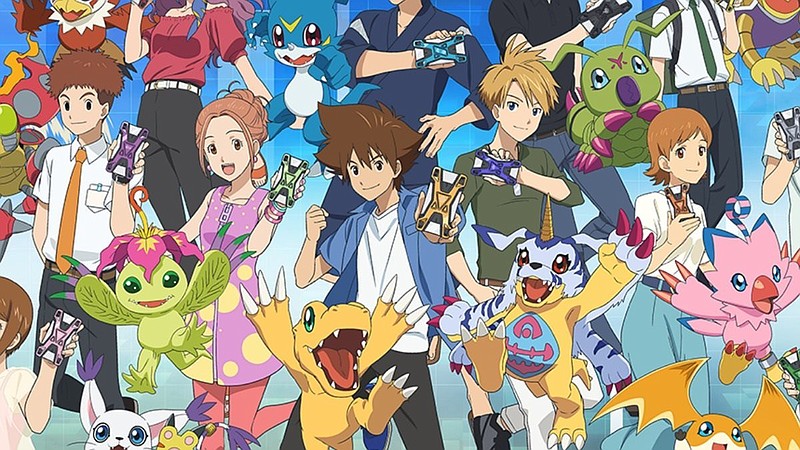 Now that I’m finished crying and touching up my makeup from said tears, I can write about the “Digimon Adventure” I just finished, “Last Evolution Kizuna.”

I grew up watching Digimon. It premiered in North America in 1999 when I was just 9 years old. And while I was enjoying Pokemon at the time, choosing between that franchise and Digimon was never really an issue for me. I took the “why not both?” approach.

But while Pokemon just keeps going and going, making more games for me to buy, Digimon, its original story, finally concluded after two decades.

The story follows a group of kids (or “DigiDestined”) at summer camp who were transported into a parallel world called the Digiworld. There, they were met by digital monsters that became their partners. The digimon are a combination of different animals, elements, weapons and more. And at the heart of the story is their relationship with their human companions. The children and their digimon often end up fighting bad guys to save the human and digital worlds.

That’s kind of why I’m crying as this final movie wraps up. I’ve watched these kids and their digimon grow up for 20 years now, from brats at summer school to high school students and college grads. It’s ultimately the message of “Last Evolution Kizuna” that everyone grows up, no matter what.

Sometimes friends grow apart, and sometimes people pass away. But ultimately, you’ll always have the memories and feelings those friends brought you. It’s a bittersweet message, but one this movie delivers in its full capacity. The trailer for the movie makes it immediately clear what the story will focus on.

A mysterious digimon is attacking DigiDestined across the world and causing them to fall into comas. So our central heroes are asked to stop it. There’s just one problem. Two of the characters, arguably the main heroes of the whole series, find out their own time with their digimon partners is running out. And the more they battle, the faster that time passes.

If you’re expecting to escape “Last Evolution Kizuna” without any sniffling, forget it. My wife watched the trailer with me earlier this week and said she was starting to get sad. She doesn’t even watch Digimon.

Digimon has always boasted a large cast of characters. The original television series, which had 54 episodes, followed eight kids (and their digimon). That’s essentially 16 characters. But with 54 episodes, writers can give them enough time to develop. The second Digimon series added four more characters and their digimon, while also keeping the original kids involved in the story. Of course, it also had 50 episodes to weave their narrative all together.

Then there are some movies to follow, and it all culminates in “Last Adventure Kizuna.” So this isn’t a movie you can just launch into without having seen all the other stuff.

I spent most of the weekend getting caught up on “Digimon Adventure Tri,” a multi-part film series that takes place between the TV show and this last movie. The character designs of all the digidestined aging from middle school to high school and college was fascinating to watch. And it just further imitates real-life where kids have grown up watching this show for so many years.

The pacing in “Last Evolution Kizuna” is quick. And the film doesn’t waste time explaining much. If you aren’t on board with the story up until now, you’re out of luck. And even if you are on board, you’d best not blink, or you’ll watch the narrative zoom right by you. With an hour and 34-minute run time, Digimon knows it doesn’t have five more movies or 49 more episodes. Everything goes into one punch.

And while I was glad to see the characters from the second television series return, ultimately it robbed some of the first series main characters of screen time. As much as I love the series number two characters being included, they feel kind of tacked on in this story, probably so fans won’t complain about them being ignored. But they really don’t add much.

The movie kind of bills itself as “one last adventure” for the main characters of Tai and his digimon partner, Agumon, before they have to say goodbye forever. And because Tai’s rival, Matt (and his digimon partner Gabumon), has always been sort of the secondary protagonist, the story really focuses on them. So much of the original story is based on their teamwork.

Just about every other character in the movie gets pushed to the side so the narrative can focus on Tai and Matt. But the character I feel gets dropped is Sora. She went from being the mother hen of the DigiDestined, and the romantic interest of both Tai and Matt, to maybe getting two scenes in this movie. She’s the only character who doesn’t join in the final fight. It’s kind of a bummer. I wondered if she’d gotten more screen time if the series two characters hadn’t been tacked on.

But I would be lying if I said I was disappointed that the film focused mostly on Tai (and Agumon). They’ve been my favorite characters since 1999 (I’m biased). What made this movie even more amazing was I snagged an interview with Tai’s voice actor, Joshua Seth, before I watched “Last Evolution Kizuna.”

He’s been homeschooling his kids down in Florida, trying to survive the pandemic like the rest of us. I asked him what it’s been like to play this character for 20+ years. Seth told me it’s been amazing, rare, and lucky he’s gotten to play the role for so long. He credited fans for his longevity playing Tai.

And Seth said Tai has changed as a character over the years.

“He’s become more of the reluctant warrior [and] quiet. He’s hesitant to jump into battle because he realizes the destruction it’ll have on the world around him and shows himself to be a better leader as a result,” Seth said.

His assessment of Tai? Spot on. Tai has always been the leader of the DigiDestined, and they fall to pieces without him. But I do feel like this movie really shows he’s not the same cocky kid he was in 1999. There’s much more focus and thought that goes into his actions now. It’s great to watch that kind of development in a character I love.

Seth, as the voice of Tai, has a unique perspective on what this final movie means for the group leader and his relationship to Agumon. Because the digimon really do become best friends with their human partners. Seth said “Last Evolution Kizuna” shows it’s important to value special relationships in your life and hold dear memories you have of others.

“At the same time, when it’s time to move on, let that person go. We all have to deal with this. It’s part of the nature of life, loss, and change. We’re going to experience that with Tai and Agumon,” he said.

Keeping that quote in mind, I asked Seth if he was ready to say goodbye to Tai, and he said “Last Evolution Kizuna” feels like an ending. But he added Digimon has millions of fans across the globe. And he could see new places the producers could go with Tai and the franchise, maybe even prequels.

“I feel like Tai is part of me, especially since I’m using my own voice for him,” he said.

Seth said the character defined his career, going back to the beginning when he was pounding the pavement in Los Angeles.

And he left the door open for more.

“As always, if they call me, I will come back and voice again,” he said.

I blubbered for the entire ending of the movie. No matter what the Digimon writers come up with in the future, “Last Evolution Kizuna” really feels like a satisfying goodbye.

The animation is stellar, the music is good, and the story is solid.

I’d say the only complaint I have about the movie is more about the series as a whole. Continuity is a problem. And what I mean by that is, the way the movie ends, it seems to contradict how the second television series concluded.

The final episode of the second television series gave fans a view of the DigiDestined in 2028. And what we were shown when the episode aired in 2001 doesn’t seem to match up with how “Last Evolution Kizuna” ends.

Maybe I missed something along the way, but I don’t know how the two endings can both be canon. And sure, I know it’s a nitpick. But sometimes, that’s what we geeks do.

If you’re ready to watch this conclusion two decades in the making, I only have two pieces of advice. Make sure you’re up to date. And bring the tissues. You’ll need them.