OPINION | REVIEW: 'On the Rocks' 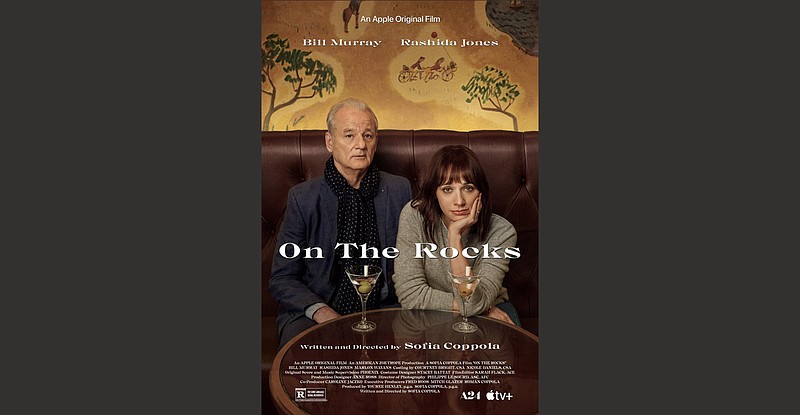 Historically, Sofia Coppola's filmmaking was always based on a finely tuned series of calibrations, whose exact limits and resonances she channelled from somewhere deep within her. So attuned was she to her particular set of amplitudes, her films made up a sort of collective reverberation -- less expressly, but similar to the way Wes Anderson's oeuvre feels of a piece -- which one could recognize almost immediately in her work.

For one thing, she trafficked in ambiguities between her characters -- perhaps, most famously, in the whispered exchange between a faded American actor (played by Bill Murray) and his young muse (Scarlett Johansson) near the end of her most lauded work, "Lost in Translation"; but also throughout her filmography; arriving at a poetic resonance between figures of some polarization, as between a burnt-out Hollywood star (Stephen Dorff) and his mostly estranged adolescent daughter (Elle Fanning) in 2010's "Sometime" -- which lent a powerful grace to her mainly boiled-down narratives. Even if, in recent years, she has tried, with varying degrees of success, to expand her exceedingly refined palate, having tried her hand at generational satire ("The Bling Ring"), and, less successfully, with Southern feminist gothic ("The Beguiled"), the sense was still her precise aesthetic remained intact.

"On the Rocks" -- which pitches Rashida Jones as a beleaguered Manhattan mother of two, who becomes suspicious of her husband after being egged on by her womanizing, schmoozy father -- finds her in the familiar territory of the father/daughter dynamic, but the extreme control she routinely exhibited earlier in her career seems to have flattened out. This is, perhaps, the only film of hers which any other competent filmmaker could have easily made.

Jones plays Laura, a writer and editor finding it tough to work in her fabulous, bright office, because of general ennui, and because her husband, Dean (Marlon Wayans), trying to keep his fledgling tech start-up successful, is working many hours, traveling almost constantly, leaving her to care for their two adorable girls on her own.

Much of the film's first act consists of Laura, whose Upper West Side apartment is beyond fabulous, whose daughters are loving, fun, and sharp, and to whom her handsome husband seems entirely devoted, complaining about how she feels old and dull. Shot long before any sense of covid-19, and the health and economic horrors many people are suffering as a result, Coppola can't be blamed for not accurately predicting the future, but the timing of the film's release, with a very wealthy, incredibly lucky woman complaining that her life isn't completely perfect, couldn't feel more tone-deaf in the time in which so many people are in serious peril and insecurity.

When Laura takes the kids and travels to the tony suburbs to visit her grandmother (Barbara Bain) at their fabulous country estate, it becomes exceedingly difficult to relate, and, up to this point, the truth is, we're given little reason to care about Laura, or her personal neurosis (other than Jones' genial likability), but then Coppola savvily brings to bear her not-so-secret weapon.

Vaguely suspicious because of Dean's preoccupation with his job, and a few clues that easily could be read one way or the other, Laura calls her dad, Felix (Bill Murray), a gallivanting, beyond-charming art dealer, whose womanizing ways destroyed the marriage between her parents many years before. Felix immediately takes to the case, and insists on meeting with his daughter the next day, flying home from Paris.

He's an endearing gadabout, full of humor, vivaciousness, and a voracious appetite for female attention, whether complimenting a stranger in the street ("You look amazing!"), noting the vocation of their waitress ("Ballet, right?" he purrs, to which she practically yelps in pleasure of being recognized "I trained at the Bolshoi!"), or placating the many rich, older women with whom he conducts his art business. He speaks French, Spanish, and some Russian, but it's clear the language he's most fond of is the bonhomie of flirty seduction.

He's also a significant B-12 shot in the arm for Coppola's film, which was running dangerously close to losing its audience. Murray, as always, slyly hilarious -- watching Felix cavort with his grandkids on the floor of their apartment, demanding they smell his foot, you can't help but wish the affable Murray was some kind of relative of your own -- and seductively silly, grabs the film's reigns and revs up the proceedings like an amped-up kid running pell-mell through a Target to get to the toy section.

He's the kind of man who picks up his daughter in order to spy on her husband in what appears to be a vintage, lollypop red Austin-Healey (complete with frequent backfire), and packs a special cooler so they can enjoy caviar on their stake-out. Felix is also a bit sad and lonely. We can faintly detect an element of this as Murray adds a single crinkled eye, or slightly extended pause. After a time, we begin to figure out part of his plan, beyond supporting his beloved daughter, is to get to spend time with the woman whom he still lovingly calls "Shorty," even as her life seems to be hanging precariously in the balance.

There's also the faint sense that Felix wants Dean to turn out to be crooked, as a way of maybe feeling better about his various sojourns and disloyalties. He wants Laura to be happy, but he also doesn't want to be the central villain in her life anymore. Of course, as an older, rich, white man, making advances on every woman he sees in the age of #metoo becomes a good deal less adorable -- even when the actor playing him clearly is -- a cultural shift, it must be said, Coppola calls attention to (at one point, in reference to his constant prowling, Laura scolds him harshly, saying he's "starting to get pathetic"). Even if the man can charm the skin off an onion, it's a skill that might be running low on luster in this era.

The film is at its best with this father/daughter interplay ("We all just want to be loved," Felix moans; "it's exhausting to try and love you enough," she hisses back); and, unfortunately, at its worst with Laura and Dean's relationship. The trouble is, Coppola has created only one indelible character in the film, and her interest notably sags when she has to cope with anyone else.

All we ever see of Dean is his being sweet, charming, caring, and incredibly good-natured. There exists little evidence of the sorts of tiny frictions, both good and bad, that mark the sense of true history in their relationship. He's a type, not a person, a necessary plot device to help Laura figure out her emotional situation, and to create the opportunity for her to hang out with her vastly more entertaining dad. In that, we're well with her.

Rating: R, for sexual references and some language

Playing on Apple TV Plus.