President’s aide adds to confusion by Compiled by Democrat-Gazette Staff From Wire Reports | October 9, 2020 at 7:11 a.m. 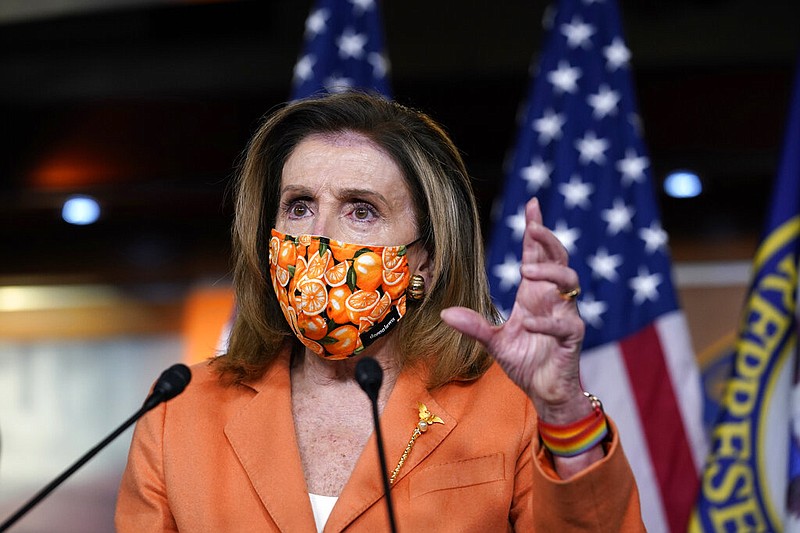 Speaker of the House Nancy Pelosi, D-Calif., meets with reporters at the Capitol in Washington on Thursday, Oct. 8, 2020. (AP Photo/J. Scott Applewhite)

WASHINGTON -- House Speaker Nancy Pelosi made her demands for a new, broader stimulus package clear Thursday morning as she rejected the idea of passing a stand-alone bill to help the airline industry, which has recently begun large-scale furloughs.

Meanwhile, there was confusion as to who was speaking for the White House.

The developments occurred two days after President Donald Trump told Treasury Secretary Steven Mnuchin to stop negotiating with Pelosi, only to announce Thursday that talks were back on. Pelosi, D-Calif., said Democrats were still ready to deal.

According to Pelosi's spokesman, Mnuchin and Pelosi spoke by phone Thursday to discuss prospects for a comprehensive economic relief bill when the White House communications director, Alyssa Farah, told reporters at the White House that the administration does not support legislation of that kind.

"We've made very clear we want a skinny package" consisting of stimulus checks, an airline bailout and small-business relief, "but not part of a larger package," Farah said in comments distributed in a White House pool report.

"The Speaker pointed out that, unfortunately, the White House Communications Director contradicted that assertion during their call. The Speaker trusts that the Secretary speaks for the President," Hammill said on Twitter.

Pelosi and Mnuchin had been discussing a package between $1.6 trillion to $2.2 trillion before Trump pulled the plug on talks on Tuesday, before saying they were back on Thursday.

On Wednesday, Pelosi and Mnuchin began discussing a bill that would have focused solely on helping airlines, but there was backlash to that idea from some Democrats and unions who questioned why airlines would get help but not others.

Pelosi said Thursday that any aid for the airline industry would only be considered if it were part of a larger relief package to meet other economic needs.

"The only point about negotiations is, ain't going to be no stand-alone bill unless there's a bigger bill, and it could be part of that or it could be in addition to that," Pelosi told reporters at her weekly news conference.

She said she and Mnuchin were still talking.

[Video not showing up above? Click here to view » https://www.youtube.com/watch?v=aDsdNpfKa5A]

"We're at the table. We want to continue the conversation. We've made some progress. We're exchanging language. So we'll see how we connect," Pelosi said.

"I'm always optimistic," Pelosi said. "Maybe the president seeing the reaction to his walking away from the table is the opportunity that we have for them to come back to the table for us to get an agreement -- and the sooner the better."

Mnuchin has already negotiated numerous spending and budget deals with Pelosi, but some Republicans in the White House and on Capitol Hill have been wary of the deals he cuts with Democrats. And the comments from Farah on Thursday gave some Democrats pause as they tried to discern the White House's current strategy.

There appears to be a new sense of urgency from the White House and some congressional Republicans to reach some sort of agreement amid signs that the economic recovery is weakening.

'WE REALLY NEED IT'

Trump said in a Fox Business interview that economic relief talks were back on track, citing his desire for another round of $1,200 stimulus checks in addition to airline aid and small-business assistance.

"Well I shut down talks two days ago because they weren't working out. Now they are starting to work out, we're starting to have some very productive talks," Trump said in an interview on Fox Business Network.

He said he believes Pelosi "wants it to happen, because it's so good for our country, we really need it."

Despite all the muddle the two sides appeared to be back to roughly where they were Tuesday morning, before Trump abruptly announced talks were over and he was asking Senate Majority Leader Mitch McConnell, R-Ky., to focus on filling the Supreme Court vacancy instead.

McConnell on Thursday, speaking in Kentucky, where he is campaigning for reelection, also talked about the need to approve additional aid.

"We're going to tackle this again. The timing is uncertain based on the proximity to the election," McConnell said at an event in Bourbon County.

The Senate majority leader suggested that he had been perplexed by recent developments. "The discussion from day to day can be confusing for all of us to follow," McConnell said.

The deal under discussion by Pelosi and Mnuchin in the past week would have included new $1,200 stimulus checks, renew enhanced unemployment benefits, and provide $75 billion for coronavirus testing and tracing, among other provisions. When talks broke off Tuesday, Democrats were pushing for language ensuring a wide-scale testing strategy. Pelosi said Thursday that they were still waiting to hear back on that and that she had reminded Mnuchin of that.

One reason talks have continued is because of concern about the weak labor market, with another 840,000 Americans filing for unemployment claims last week, more than six months after the coronavirus pandemic began in the United States.

The Coronavirus Aid, Relief and Economic Security or CARES Act from March included a Payroll Support Program for airlines that expired Oct. 1. Democrats have been pushing an approximately $25 billion bill to renew the program, but it's unclear whether the administration supports the Democrats' approach and Pelosi has now dropped the idea of advancing it on its own.

Some union leaders were angry over the prospect of Democrats advancing a bill just to help airlines when so many other industries also are in trouble -- and they made their views known to Pelosi and other leaders.

"We know the airlines are hurting," said Randi Weingarten, president of the American Federation of Teachers, but added that so are unemployed workers, small businesses, hungry children and many others. "We have taken the position that we have to try to get all of these needs met."

"The president believes we should shift into stand-alone bills to get the key points through," Kudlow said. "These are vital, targeted assistance areas that would strengthen the economy."

In a letter sent Thursday to House and Senate leaders, Amtrak urged swift passage of a measure that would extend government support for the passenger railroad, warning that without additional funding by the end of the year it would need to cut an additional 2,400 jobs, further reduce train service, and defer major capital projects.

Trump said Thursday that he hoped the talks would bear fruit even though he commented that Pelosi is "not my favorite person, she impeached me for no reason."

Pelosi returned the criticism, suggesting for the third consecutive day that the president is mentally impaired in some fashion.

Trump had been taking steroids among other medication.

"The president is shall we say in an altered state right now so I don't know how to answer for his behavior," Pelosi said on Bloomberg TV.

She also announced that House Democrats would be discussing the 25th Amendment today, which provides for removing power from the president, though she declined to say whether she believed it should be invoked.

"Crazy Nancy is the one who should be under observation. They don't call her Crazy for nothing!" the president said.

The president's opponents have discussed invoking the 25th Amendment for some time, but are raising it now, so close to Election Day.

Congress is not in legislative session, and so any serious consideration of the measure, let alone votes in the House or Senate, is unlikely. But the bill serves as a political tool to stoke questions about Trump's health as his own White House is hit by an outbreak infecting top aides, staff MEMBERS and visitors, including senators.

Pelosi along with Rep. Jamie Raskin, D-Md., a constitutional law professor, plan to roll out the legislation today that would create a commission as outlined under the 25th Amendment, which was passed by Congress and ratified in 1967 as way to ensure a continuity of power in the aftermath of President John F. Kennedy's assassination.

Information for this article was contributed by Erica Werner, Jeff Stein, Michael Laris, Lori Aratani, Moriah Banlingit and Luz Lazo of The Washington Post; by Lisa Mascaro, Bruce Schreiner, Laurie Kellman and Pamananda Rama of The Associated Press; and by Erik Wasson of Bloomberg News. 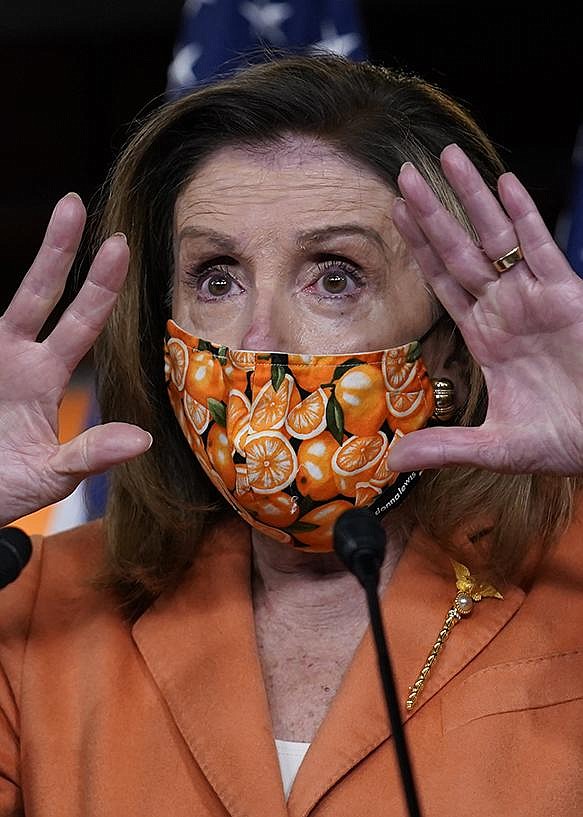 House Speaker Nancy Pelosi said Thursday that any financial relief for the airline industry would have to be part of a larger stimulus package. More photos at arkansasonline.com/109aid/. (AP/J. Scott Applewhite)
ADVERTISEMENT