'Spontaneous' director about to blow up 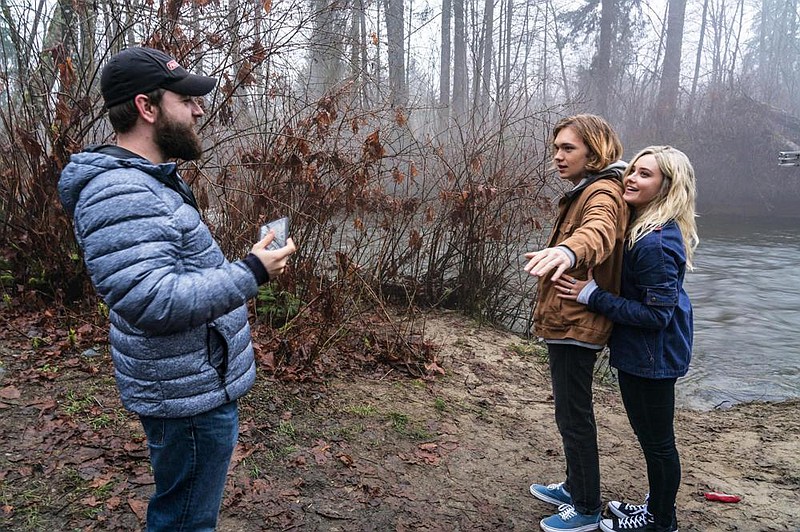 Director Brian Duffield works with his young stars Charlie Plummer and Katherine Langford on the set of “Spontaneous.”

Screenwriter Brian Duffield's directorial debut "Spontaneous," which opened at drive-ins and select theaters last week and is available on video-on-demand today, stars Katherine Langford ("Knives Out," "Love, Simon") as Mara, a stressed-out teen whose classmates are randomly and inexplicably exploding around her. If the setup just made you blink or roll your eyes, the rookie director admits he's drawn to material that might sound, um, odd.

Duffield says that he and the cast treated novelist Aaron Starmer's material as if the danger of having someone next to you instantaneously blowing up like a firecracker was real.

"It was really important to Katherine that the things she goes through is what is the most human way. What is happening around her is awful," Duffield explains. "It's not like a hug makes it better. How do we parent this person who is going through an insane amount of pain ....

"Because you get such a human performance, it's not really science fiction. It's not even really horror. She's really just kind of going through this movie about grief and coping and how to put your puzzle pieces together after they've been completely shattered."

While the writer-director has never had any of his friends or family turn into bloody rubble, his own misfortunes have worked their way into the material and tone of the movie.

"I graduated college. I did really well in school. I worked really hard. I came out to L. A. I got instantly ... a couple of jobs. I was working [very hard]," Duffield says.

"And then it was 2008. The recession hit, I lost all my jobs and instantly had massive amounts of debt. I was not homeless, but that was only because I had really good friends. I had this anger inside of me about how this is not fair. I did every single thing right and then these Wall Street shenanigans derailed my life. I got really bitter, and it took a while for me to kind of crawl out of that and start writing again and just start being like, 'What can I do today?'"

Because the story involves people who die arbitrarily because of something no one in the film understands, the film, which has been in release limbo since it was completed in 2018, has taken on a new resonance. With questionable cures and a whole generation having to struggle with stresses their parents never imagined, it's easy to see how "Spontaneous" has reminded, well, just about any viewer of covid-19.

Starmer's book came out four years ago, but the parallels between the world he and Duffield have created are hard to miss. It's tempting to wonder how the movie might have been received if the releasing companies weren't part of a long process of ownership wrangling.

"I've never gone through this experience before as a filmmaker. It's so interesting to see how the movie is shaped by the world it is released in," Duffield says. "I have no sense of time anymore. We have all the hazmat suits, the quarantine suits, vaccines. We have all that stuff in the movie. I watch it now, and I go, 'I know so much more about the CDC and pandemic responses than I did in 2018.' So does everyone watching the movie. Hayley Law [who plays Tess] has a line where she says as she's breaking down, 'People have been dying for seven months!' And literally it's been seven months of covid."

Duffield had to use his imagination to imagine what it would be like if teenagers had to deal with physical and emotional instability. The Pennsylvania native also had to depict a high school environment that was nothing like his own.

"I was raised by evangelical missionaries outside of Philadelphia," he says. "My parents moved to Ireland where they are still to this day. I lived there for nine years and had every kind of school experience you could imagine. For four years I was in a 'Little House on the Prairie'-type school where every year you just moved a row over. There was one teacher for three grades because it was such a small Irish town. I then went to a Church of Ireland school with Hogwarts-like uniforms."

His preparations for Temple University and Messiah College were similarly atypical.

"I knew I was coming back to the States, and this is prevalent now, all my schooling was on DVD. It must have been 2002 and 2003. We'd get these boxes of videos with a camera set in a classroom in the late 1990s. It's probably similar to the Zoom classroom experience except for the obvious fact that the teacher couldn't see me."

He adds, "The actors in the movie are about the same age as I was, maybe a little older. If I hit a false note, I would get told really quickly because teens aren't, um, quiet when things are false."

Duffield is credited with the screenplay for "Insurgent," which deals with young people in similarly traumatic situations and McG's comedy-horror film "The Babysitter," but he also wrote The Blacklist-award winning "Jane Got a Gun," which is a western.

Sticking to a single genre isn't for him.

Whatever happens with his career, Duffield says, "I get bored very easily. For me right now, it would be tough for me to envision another high school this quirky, whatever this is. Everything I've been talking about doing next is as wildly different from this as possible. It's not to say that I crushed this, but as somebody who watches all kinds of movies -- I want to play in as many of those sandboxes as possible."

One thing that has made his current sandbox rewarding despite challenging weather conditions is that his text for this film wasn't re-written by others and that he got to supervise the editing.