4 Mystery Plants for this week in October 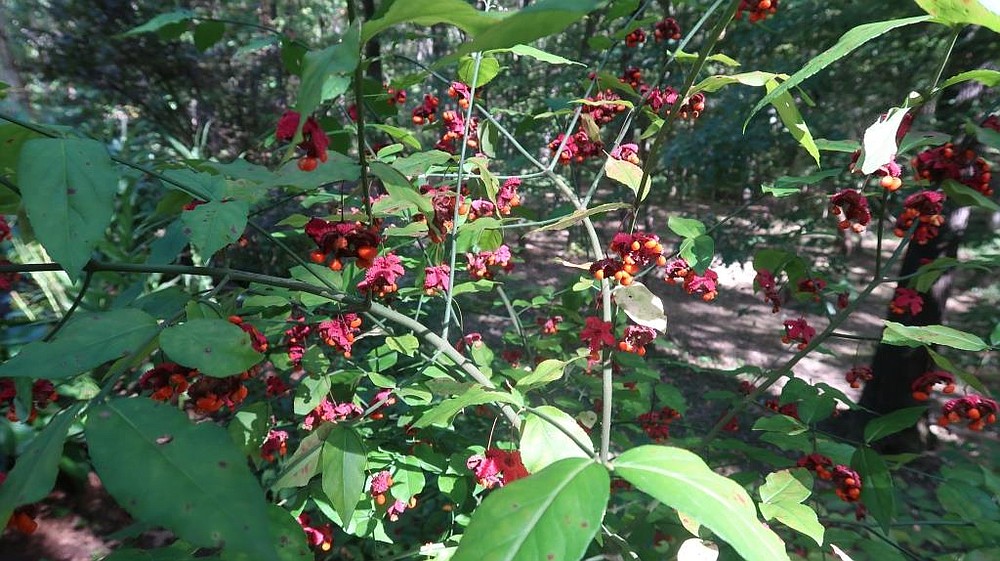 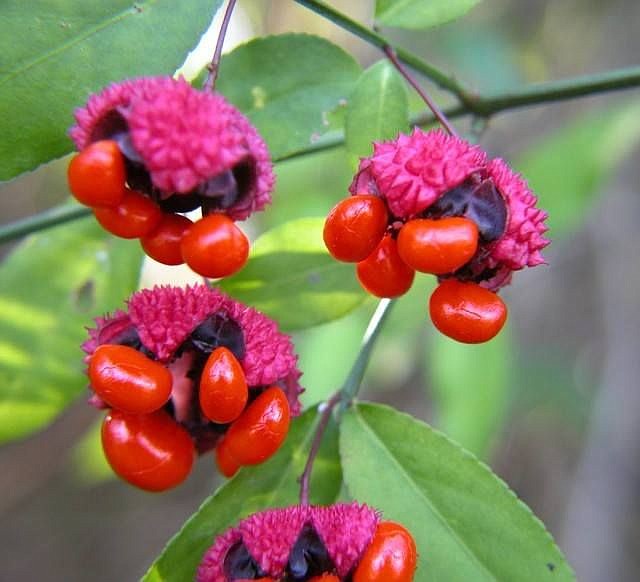 It is a native woodland shrub. It produces multiple canes and never gets more than 5 or 6 feet tall and about 4-5 feet wide. The plants bloom with tiny yellowish-green flowers in the summer. 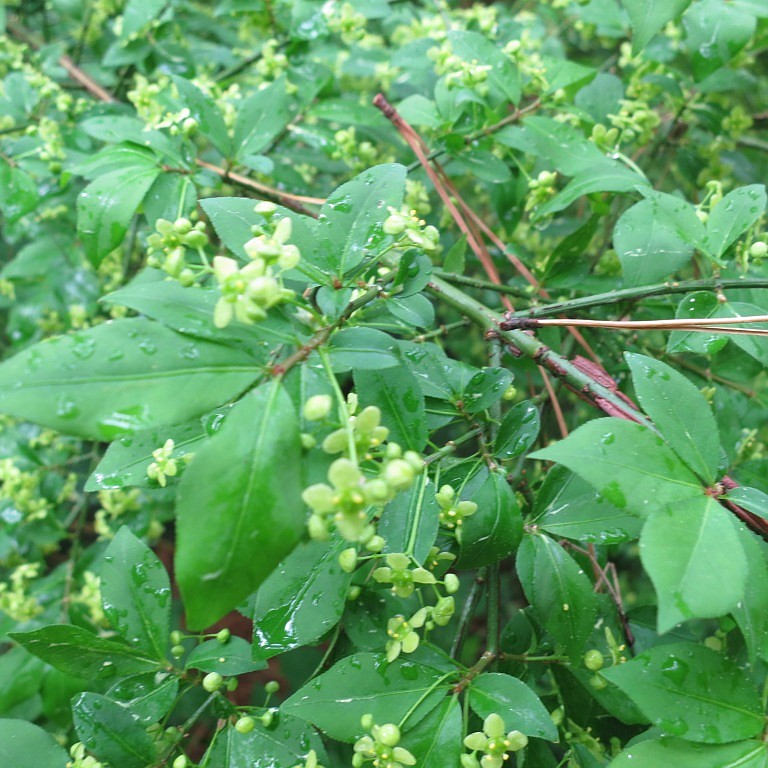 The flowers are followed by small green capsules. 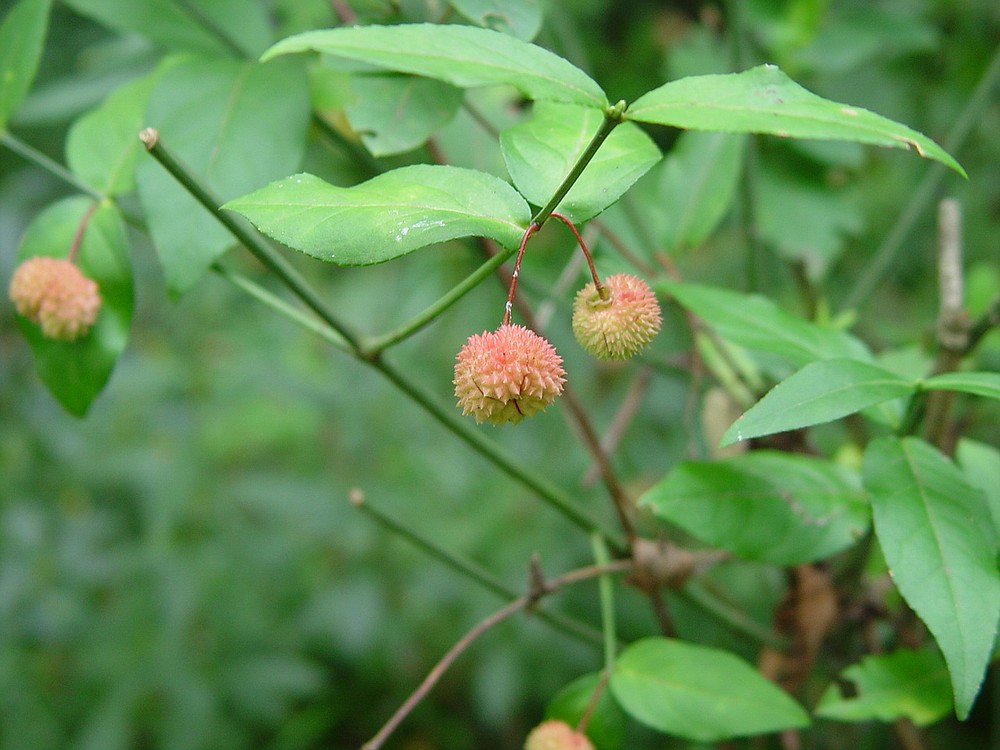 As they age, they turn a strawberry red color and are slightly warty. When they really shine is when the capsules pop open to expose bright orange seeds. 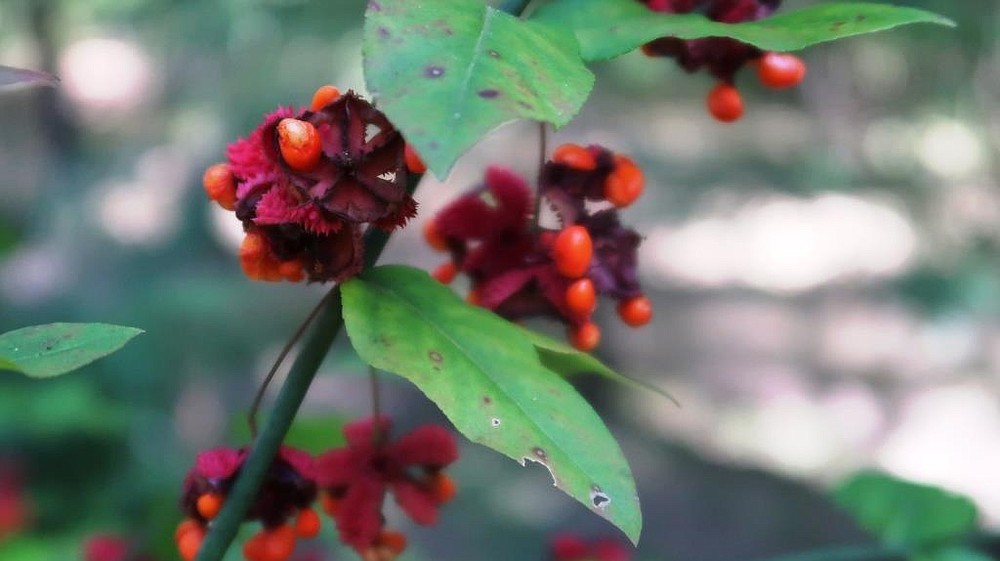 The plant does best in partial shade or filtered sun. 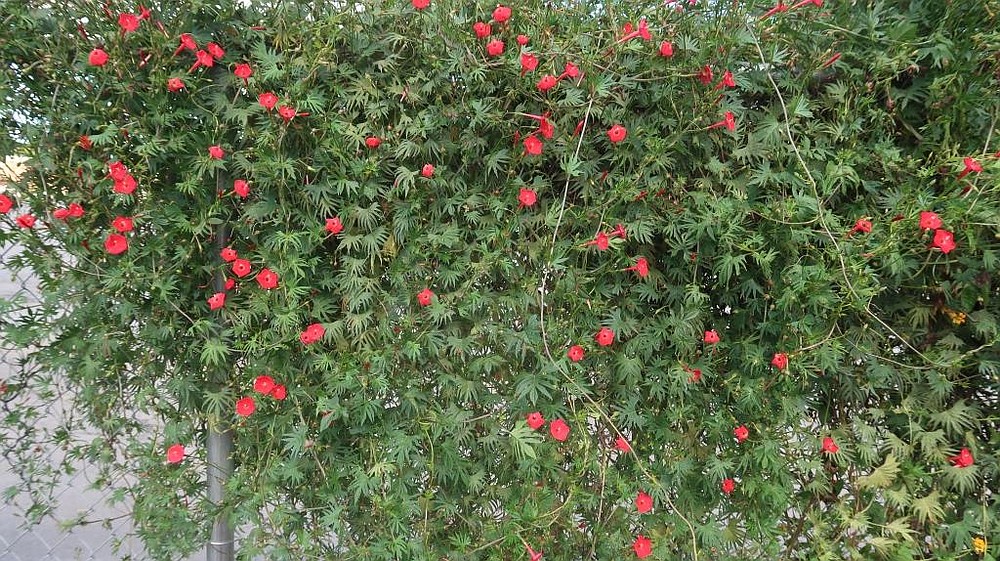 Other common names include Cardinal Vine and Hearts and Honey (which I had never heard before). Notice the plant genus – Ipomoea. It is related to a morning glory. Some of you guessed cypress vine, (Ipomoea quamoclit) 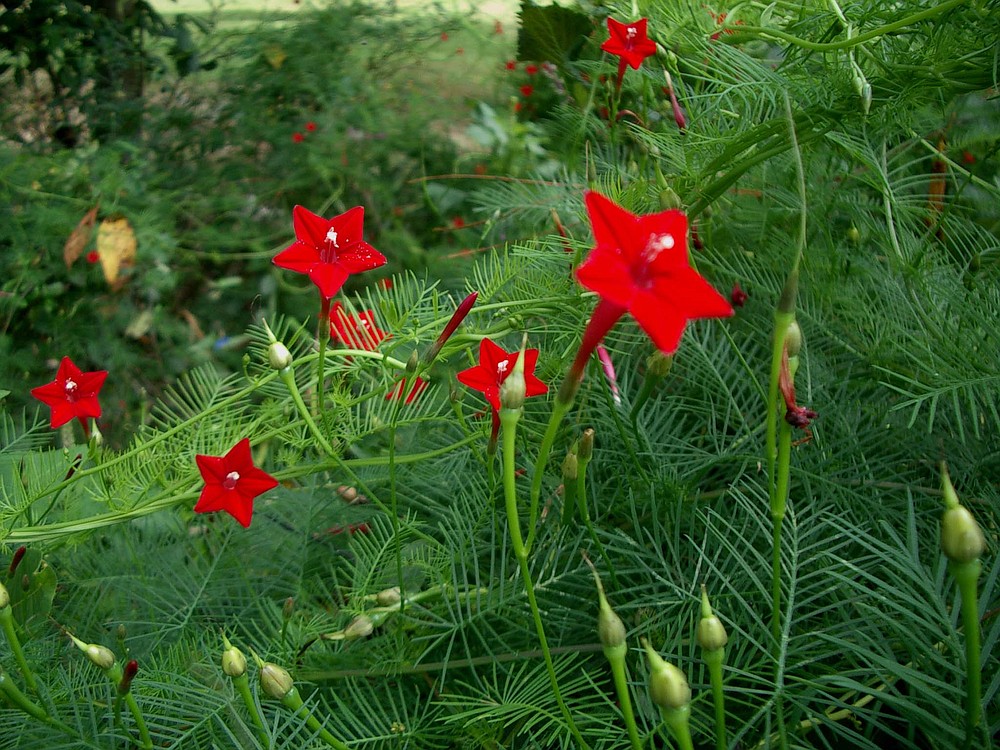 which is one of its parents—this plant is a cross between the cypress vine and the red morning glory. The flowers on both vines are red and attractive to hummingbirds, butterflies and bees, but the Cardinal creeper has larger leaves and slightly larger flowers. 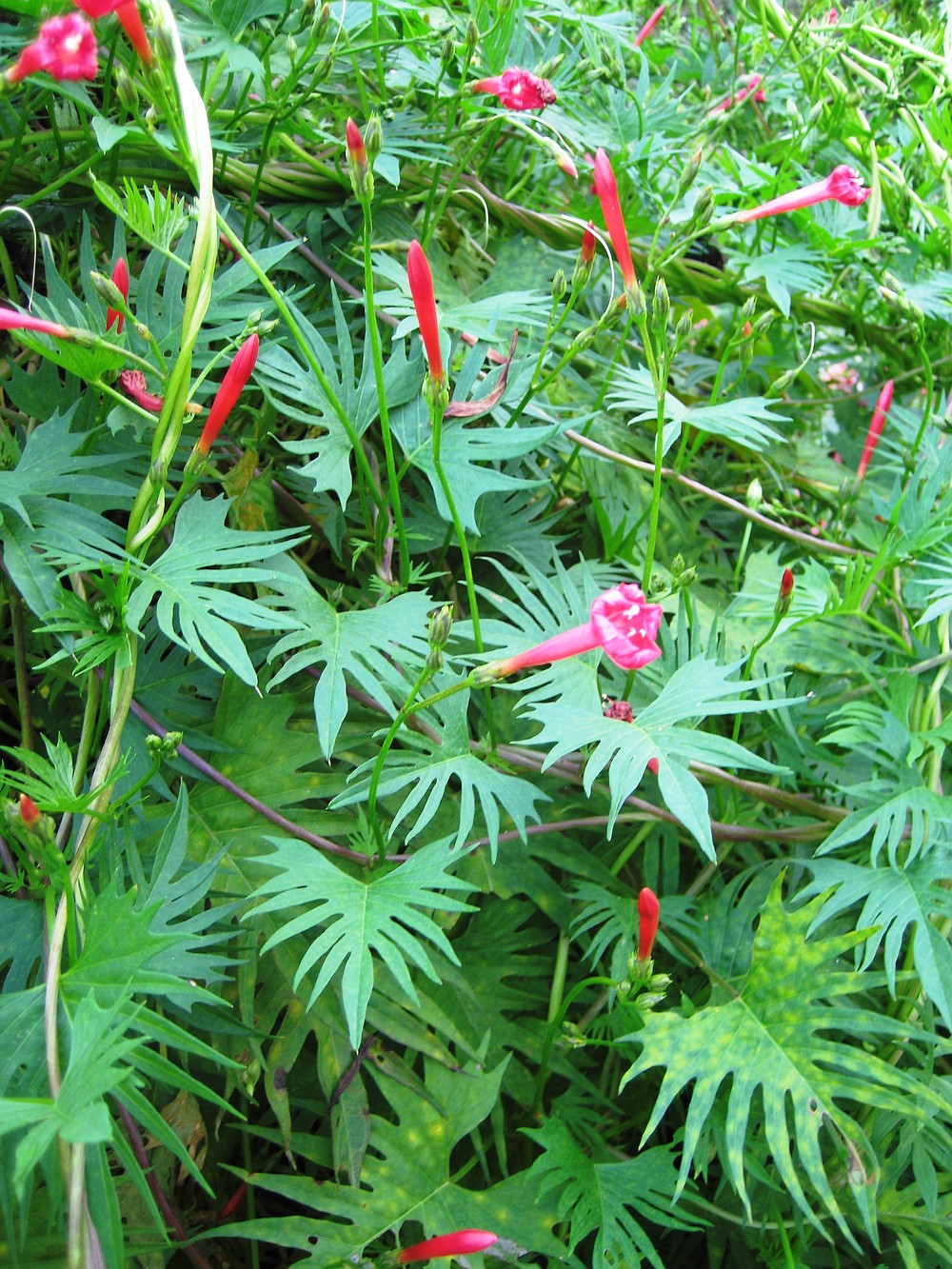 Both are annual vines which reseed themselves. In my yard, neither one is invasive, but in gardens with rich soil, they can be a bit weedy. I find the cardinal climber is a bit better behaved than cypress vine, but I do love them. They do best in full sun and usually don’t start blooming until mid-summer. Then they will bloom 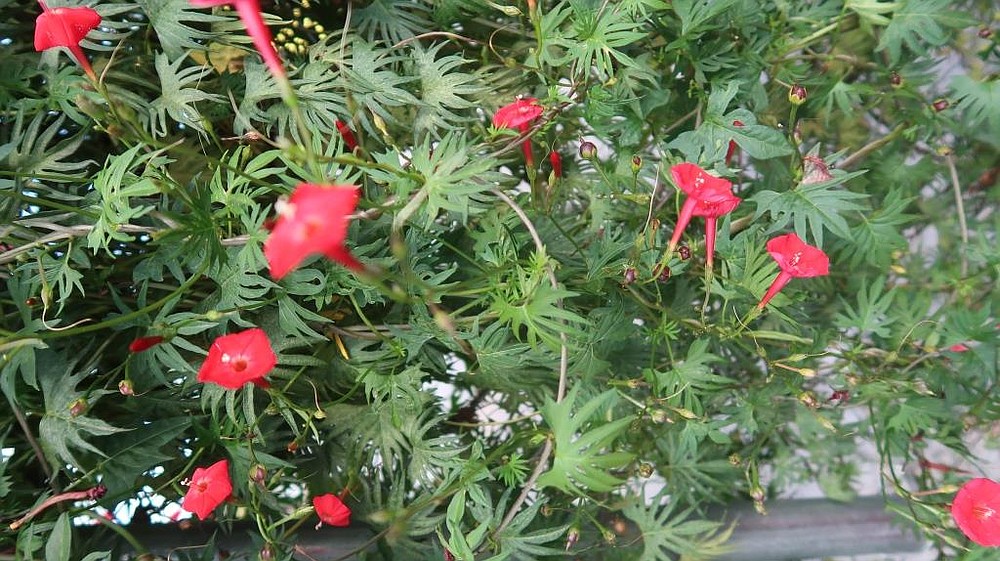 up until a frost kills them. 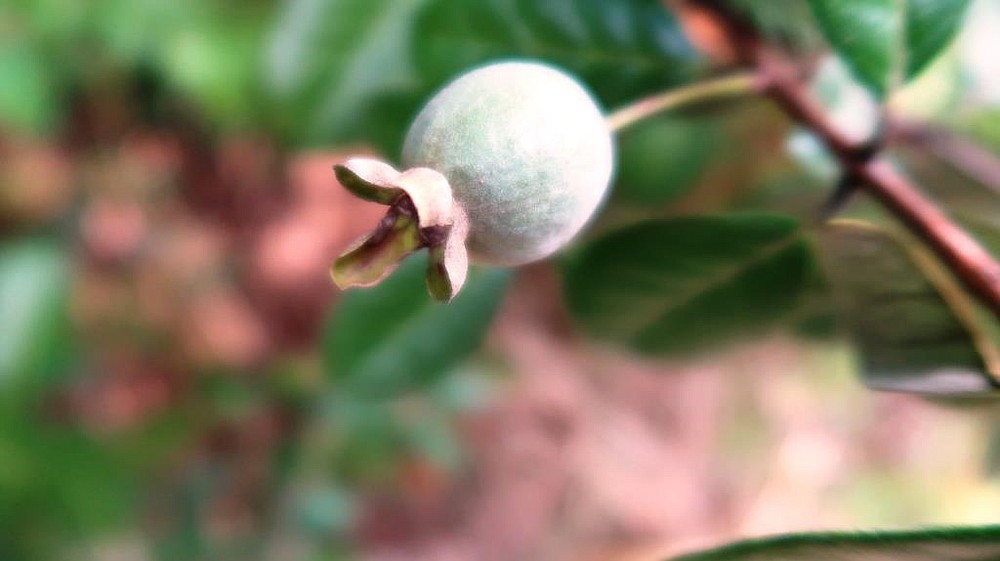 (previously Feijoa sellowiana) is the second time this plant has been a mystery plant. This spring I posted the blooms, 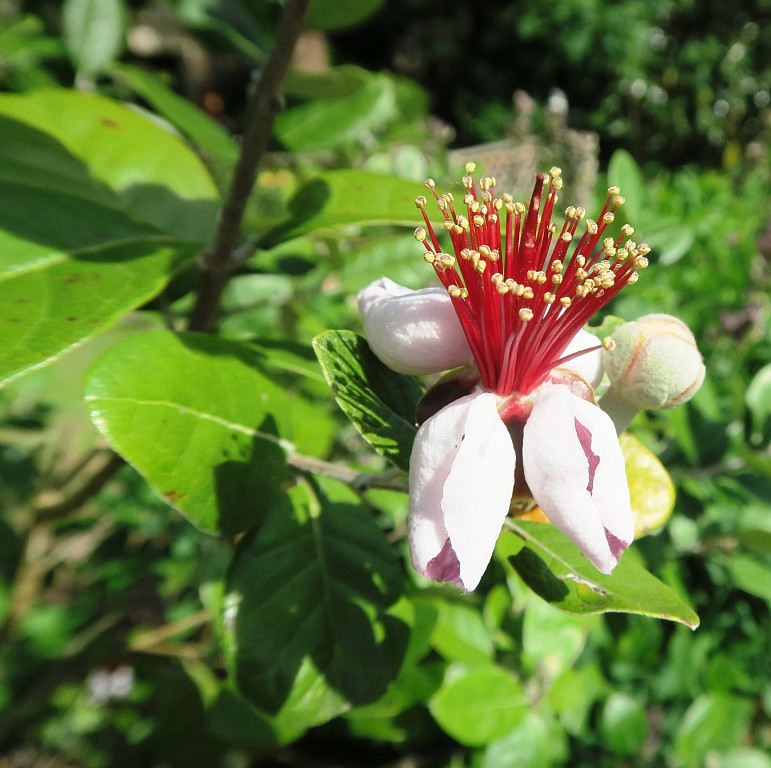 so thought I would try the fruit this time. This evergreen shrub is native to South America, and is marginally hardy in central Arkansas. 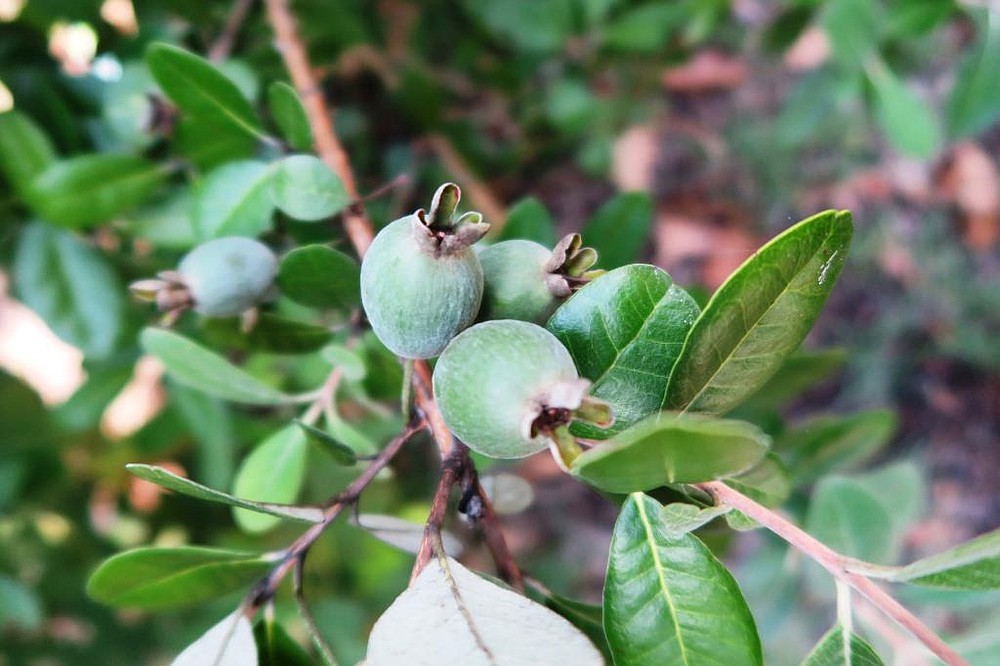 I have had it in full sun, in an unprotected area now for about 5 or 6 years, but it would do equally well in partial shade and could possibly be grown a bit further north if it was in a more protected spot. This year I had loads of flowers, but I only have about 20 fruits that will be maturing. You are never quite certain when to harvest, but when I see a fruit falling off the bush, that is my signal. 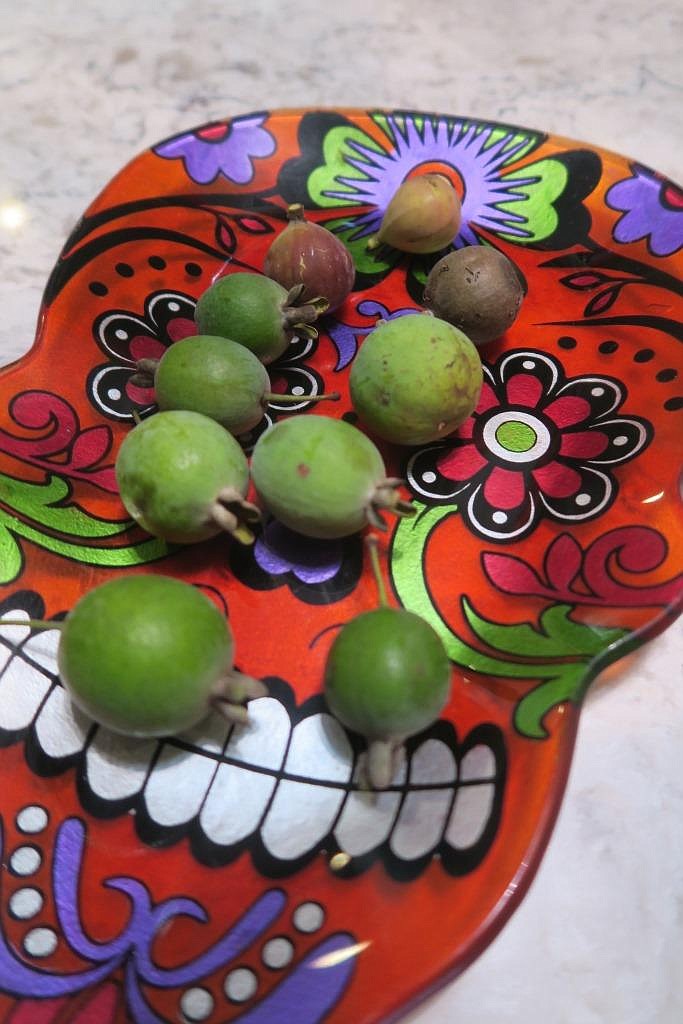 They are not large fruits, but quite tasty. The blooms are edible too and supposedly taste like marshmallows. 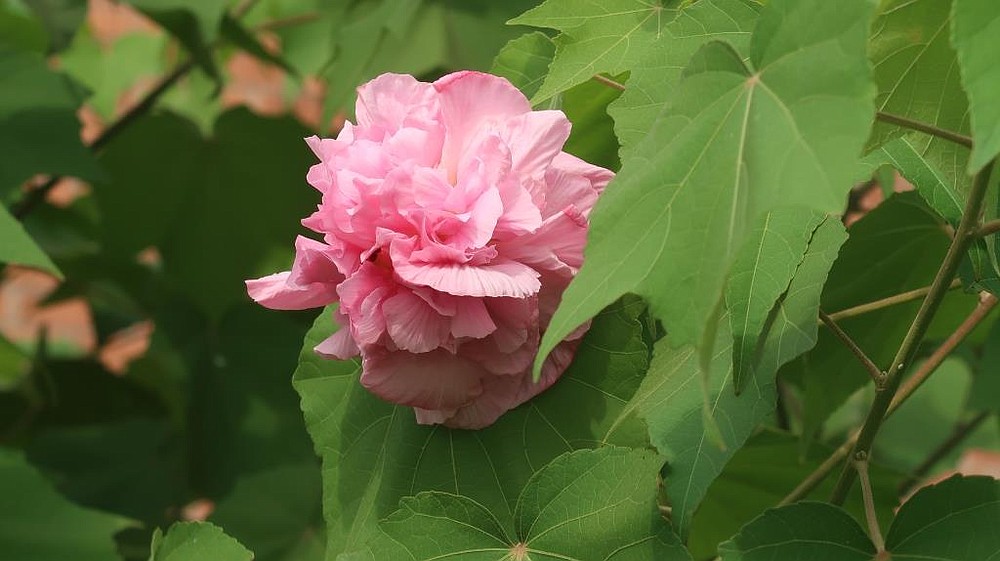 is a hardy hibiscus that can grow quite large. It doesn’t begin blooming until fall, and occasionally an early frost will nip the blooms. I took this picture this week at the Pulaski County Extension office. 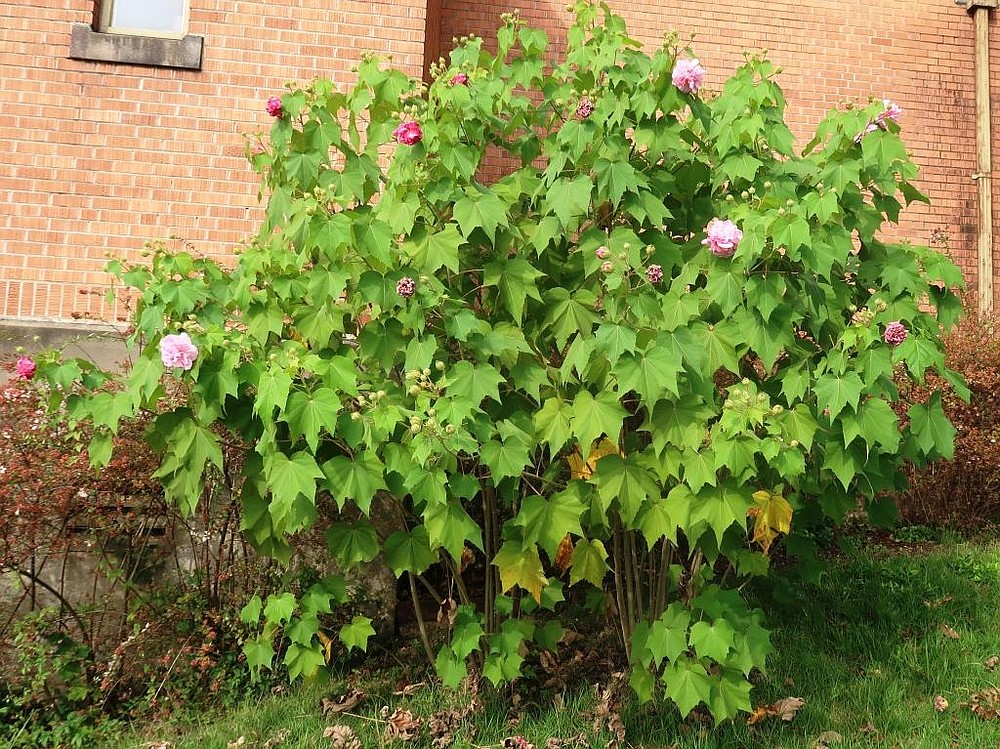 The blooms can be single 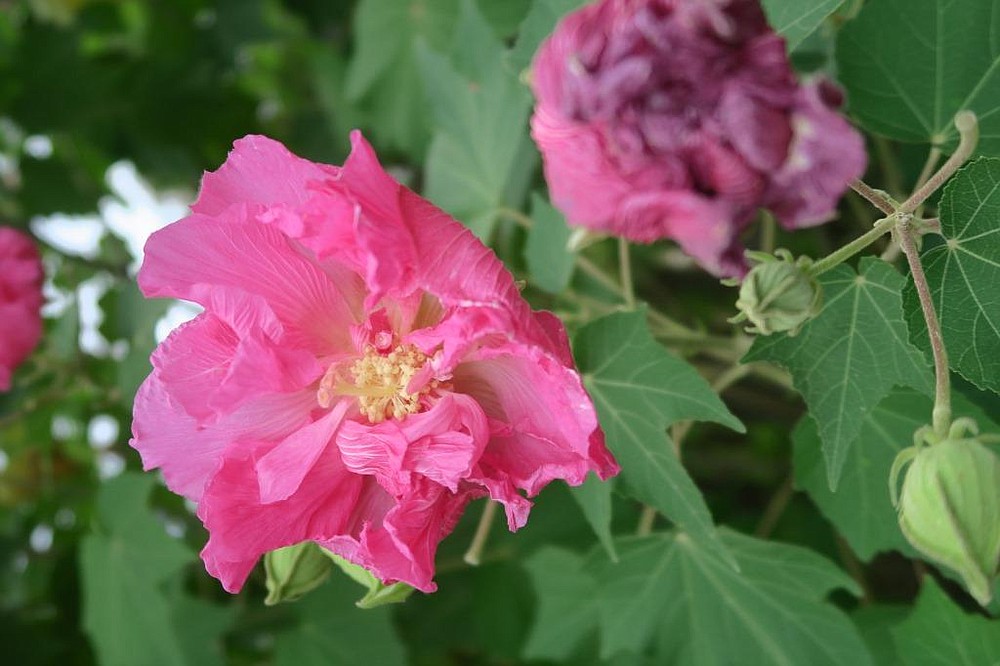 or double, but each flower mutates or changes from opening until closing. Some open light pink and age dark pink, while others go from white to dark pink. 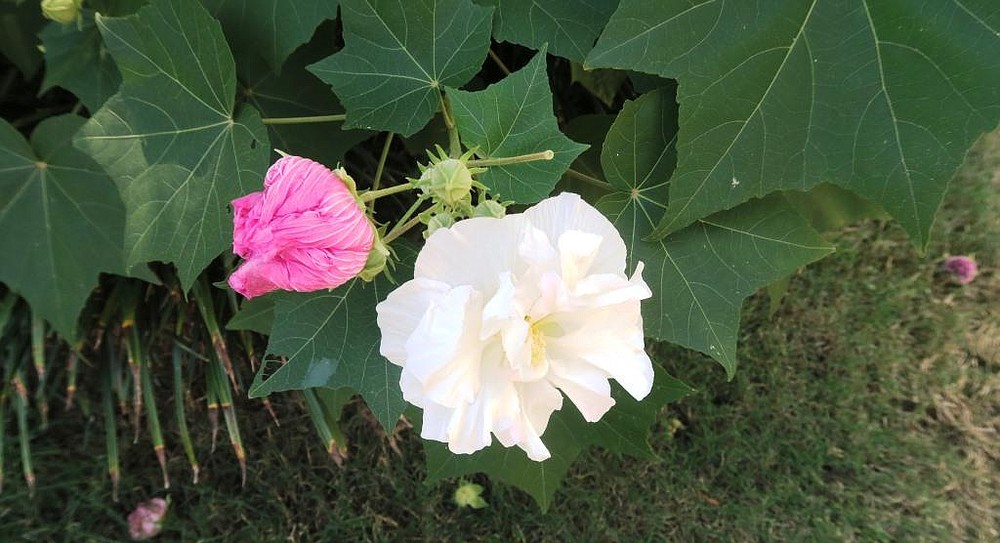 Each bloom typically lasts two to three days, so you can have multi-colored blooms on the same plant. 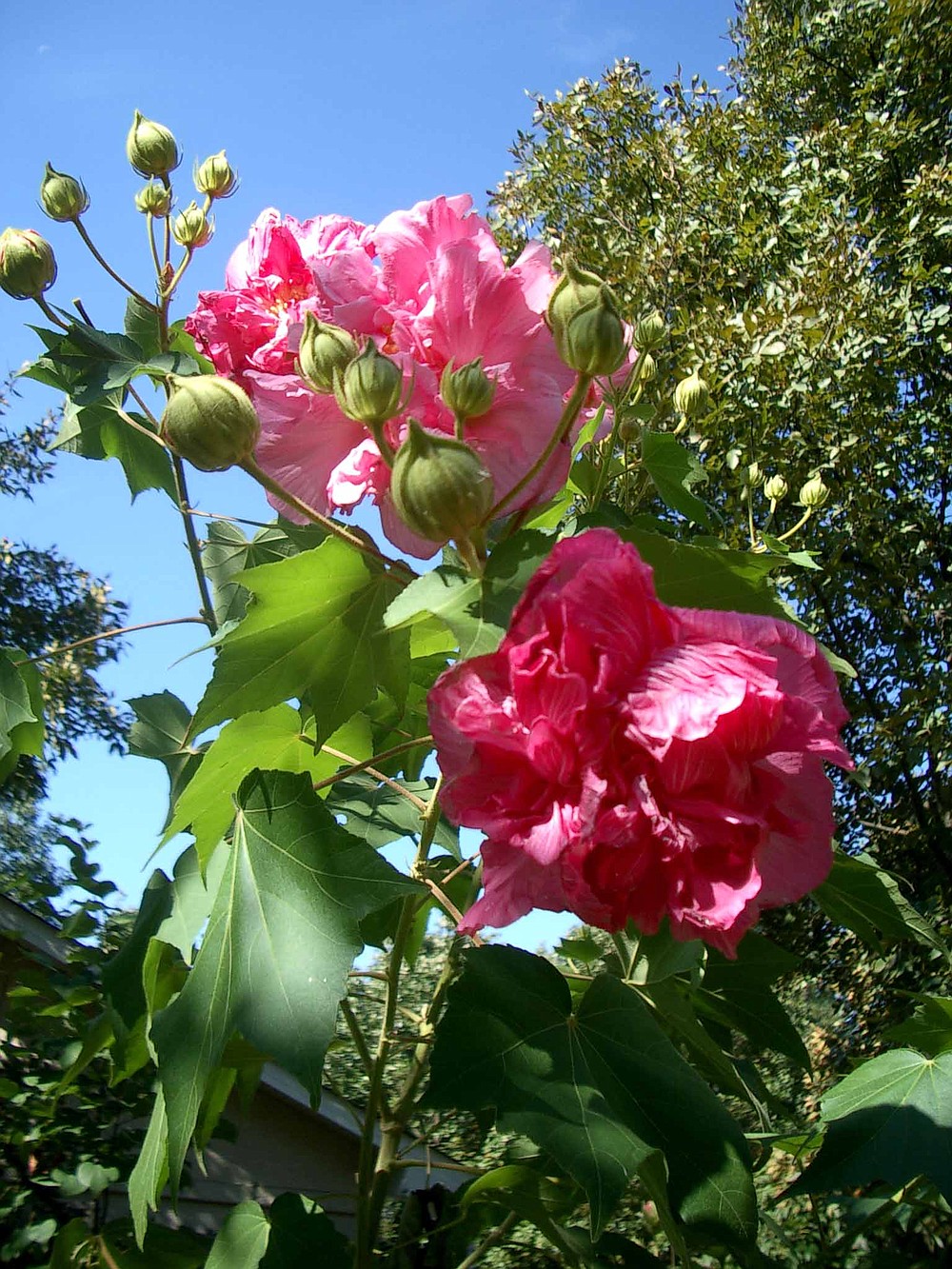 It is not reliably hardy in north Arkansas, so taking some cuttings to root before a frost can insure you have new plants for next season. Like most hardy hibiscus it does best in full sun with ample moisture. It will die back completely to the ground after a killing frost and return next spring when the soil warms up (where winter hardy).