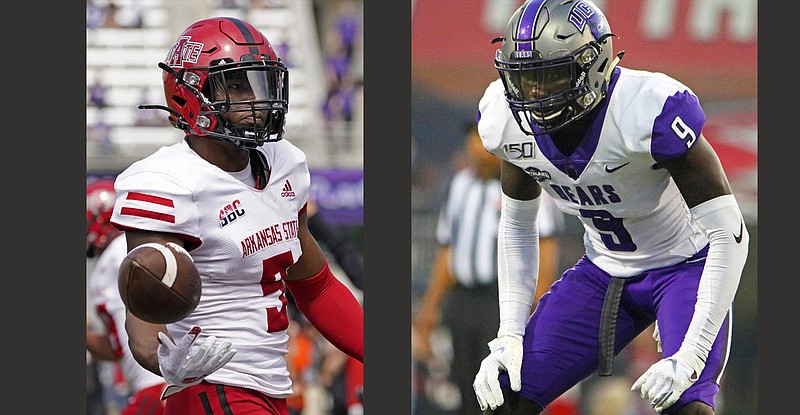 In this combination of photos Arkansas State senior wide receiver Jonathan Adams Jr. (left) has 20 receptions for 261 yards and 3 touchdowns this season. Arkansas senior cornerback Robert Rochell (right) has 11 tackles, 2 pass breakups and a forced fumble that he returned for a touchdown, and he also has 10 career interceptions. Both are potential draft picks and will square off Saturday in Jonesboro. (AP/Charlie Riedel, left) (Photo courtesy of the University of Central Arkansas, right)

JONESBORO -- Arkansas State University got back on track Saturday, beating University of Central Arkansas 50-27 in a game that started slow, but quickly picked up after the first quarter.

It was a sluggish start for both teams. UCA blocked an Arkansas State field goal on the first drive of the game and returned it to the ASU 23 yard line. The Bears would only score a field goal and on the next possession gave up an Arkansas State safety, giving UCA just a 3-2 lead at the end of the first quarter.

UCA would tack on a field goal on its second possession of the second quarter, and Arkansas State responded with a touchdown pass from sophomore quarterback Layne Hatcher to senior wide receiver Jonathan Adams Jr.

On the next UCA possession, ASU sophomore cornerback Samy Johnson intercepted junior quarterback Breylin Smith and returned it 60 yards for a touchdown to make the score 16-6 in ASU's favor with 3:14 left before the half.

A fumble by Arkansas State junior running back Jamal Jones led to a quick UCA touchdown by Smith connecting with junior receiver Lujuan Winningham from 23 yards out. Hatcher then led ASU on an eight-play, 73-yard drive in 58 seconds that was capped by a 15-yard touchdown reception by senior Brandon Bowling to give ASU a 23-13 lead into halftime.

Arkansas State kept that momentum to start the second half, but this time junior quarterback Logan Bonner would lead the drive, taking the Red Wolves down the field in five plays and 75 yards and throwing a three-yard touchdown pass to senior Dahu Green. UCA would fumble on the following possession, leading to Adams' second touchdown of the day from Hatcher, this time from 22 yards out.

After a goal line stop by ASU's defense, the Red Wolves would add another touchdown, with Bonner and Green connecting from 20 yards out to take a commanding 43-13 lead going into the fourth quarter.

UCA would get the ball back with a chance to cut the game to one score, but an interception by ASU junior safety Antonio Fletcher gave possession, and a chance to seal the game, to the Red Wolves.

And that's exactly what Bonner did, hitting freshman Corey Rucker for a 56-yard touchdown pass to make it 50-27 with 5:14 to go. Arkansas State stopped UCA two more times to run out the clock and move to 2-2 on the season. UCA moves to 2-3.

Arkansas State will have a quick turnaround, facing Georgia State on Thursday in Jonesboro. UCA will travel to Missouri State on Oct. 17.