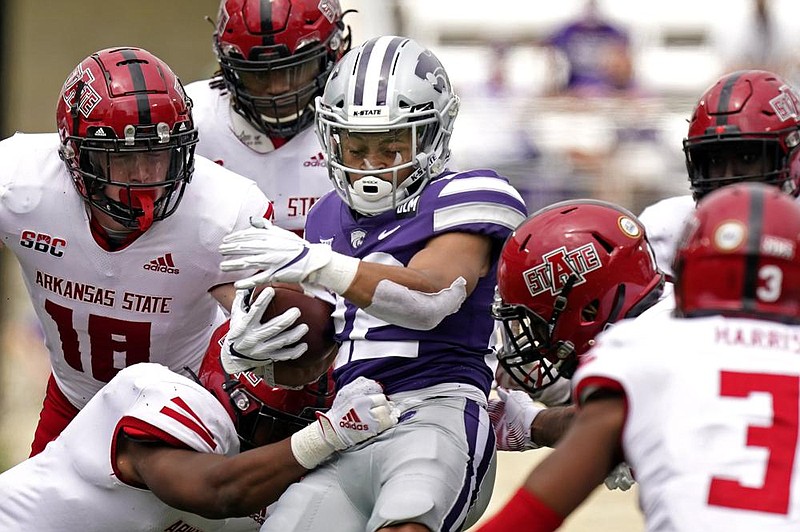 Arkansas State’s defense, shown during the Red Wolves’ victory at Kansas State on Sept. 12, has struggled stopping opponents on third down since that game. (AP/Charlie Riedel)

Arkansas State University knew what was coming against Coastal Carolina.

On nearly all 17 third downs the Chanticleers faced in a 52-23 win a week ago, the Red Wolves knew where the ball was going but still couldn't get off the field on 10 of those downs.

"We knew what was going to happen, we just didn't stop it," sophomore cornerback Samy Johnson said. "Going into the week our coaches told us how good they were on third down and what they wanted on third downs. I guess just as a team we weren't focused well enough, and we didn't execute well enough to do our assignments."

Arkansas State had an abundance of defensive issues exposed against Coastal Carolina -- busted coverages, missed tackles, little pressure on the quarterback and, most importantly, an inability to get off the field on third down.

This week, third down has been an emphasis for ASU, which faces the University of Central Arkansas today at 2:30 p.m. in Jonesboro. And if the Red Wolves want to get back to what they looked like against Kansas State and avenge their 2016 loss to the Bears, it's going to start with getting defensive stops.

"All week we've been just meeting together as a team and letting each other know we've got to be more focused," Johnson said. "We're going to have to make changes. We're going to have to pay attention to the little details and make sure we're doing everything perfect so that we don't have another game like that again."

So what needs to happen for ASU to replicate the performance it had against Kansas State?

"At the end of the day, we've got to get home to help [the secondary]," senior linebacker Justin Rice said about getting to the opposing quarterback. "The faster we get home, the less they have to cover. They have to trust us, and we have to trust them.

"We're emphasizing effort and discipline. We're definitely making the playbook really simple so that we're locked down and honed in our details. We're just going to run to the ball this week because this quarterback likes to scramble and we're going to need to run and chase him down.

UCA has struggled offensively on third down, converting slightly less than 26% this season. Still, ASU is facing a veteran and mobile quarterback in junior Breylin Smith who has reliable receivers in junior Lujuan Winningham and sophomore Tyler Hudson.

"UCA is a really good team," Johnson said. "They have a really good offense, a really good quarterback and probably one of the problems for our defense is the quarterback's ability to extend plays. A play could go wrong and he could make something happen out of it, and I think that's always a problem for any team."

Smith's ability to escape the pocket could become an issue for the Red Wolves on third down, as Coastal Carolina's Grayson McCall torched ASU's defense with his elusiveness several times a week ago.

This led ASU to practice third-down scenarios more than usual this week.

"You can rep third down," Rice said. "We do a lot of it and try to anticipate what kind of plays they're going to run against us on third and long, third and medium and third and short. It's more of a mental thing -- what can they do to us in certain coverages and certain packages."

Defensive coordinator David Duggan has been surprised by his team's struggles on third down.

If his defense improves by the slightest today, it could make the difference in the outcome, Duggan said.