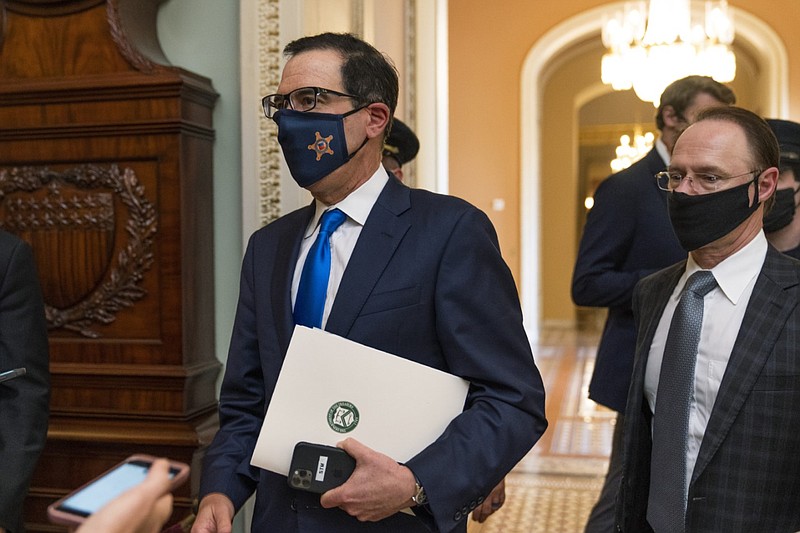 WASHINGTON -- Treasury Secretary Steven Mnuchin made an offer of more than $1.8 trillion to House Speaker Nancy Pelosi, D-Calif., on Friday in a renewed search for an economic relief deal, but agreement remained elusive as Pelosi said her terms still weren't met.

"Of special concern, is the absence of an agreement on a strategic plan to crush the virus," Pelosi's spokesman, Drew Hammill, said on Twitter after Pelosi and Mnuchin spoke for 30 minutes Friday afternoon. "For this and other provisions, we are still awaiting language from the administration as negotiations on the overall funding amount continue."

"Covid Relief Negotiations are moving along. Go Big!" President Donald Trump tweeted Friday. Later in the day, speaking on Rush Limbaugh's radio program, Trump said, "I would like to see a bigger stimulus package, frankly, than either the Democrats or the Republicans are offering."

White House economic adviser Larry Kudlow told reporters Friday that "developments are positive" and that "the bid and the offer have narrowed" in advance of the telephone conversation later Friday between Pelosi and Mnuchin.

The new $1.8 trillion offer is an increase from the White House's most recent proposal of around $1.6 trillion, which Pelosi had dismissed as too meager.

Among the changes, the new offer proposes $300 billion for cities and states, up from $250 billion in the earlier proposal; it maintains a $400 weekly enhanced unemployment insurance benefit from the previous version, but for a somewhat longer duration, according to a person familiar with the contents who spoke on the condition of anonymity to discuss them.

The White House's offer on stimulus checks includes $1,000 per child, instead of the $500 per child provided in the original Coronavirus Aid, Relief and Economic Security (CARES) Act approved in March, according to two people with knowledge of the plan.

The figure for states and cities, first reported by Politico, is still significantly lower than Democrats had been seeking. That issue has been a long-running point of contention between the two sides, with Republicans claiming Democrats are trying to "bail out" blue states.

Roughly $400 billion of the spending would come from money that had already been approved by Congress and would be repurposed, an administration official said, so that the net cost of the bill would be closer to $1.5 trillion.

A number of companies in the past few weeks have begun layoffs and furloughs, particularly in the travel industry. Other sectors are also showing signs of strain.

Some Republicans appear supportive of some sort of new aid. Sen. Joni Ernst, R-Iowa, who is in a tight reelection race, wrote on Twitter that she had spoken to Trump and urged him to provide more economic relief.

"The biggest thing that we need to see in a bill that, frankly, needs to get through quickly, is an extension of the application period for the PPP [Paycheck Protection Program], because that's so essential for small businesses," Jay Timmons, president of the National Association of Manufacturers, said at a Washington Post Live event Friday. Without certainty of more aid, he warned, businesses might "have to make horrific decisions to lay off parts of their workforce."

Pelosi had been pushing legislation around $2.2 trillion in the talks with Mnuchin before Trump abruptly pulled the plug on negotiations Tuesday. Trump reversed course several hours later, though, after the stock market sank and some in his own party objected.

Pelosi sent a letter to House Democrats on Friday morning criticizing Trump for not taking the pandemic seriously enough.

"The Administration does not share this priority of crushing the virus. The President does not have the capacity, leadership or plan for testing, tracing, and isolation that is needed," Pelosi wrote. "Instead, Trump's delay, denial, distortion of reality and disdain for science has exacted a deadly and preventable human toll."

"Because it is so necessary to meet the needs of the American people I do hope that we will have an agreement soon," Pelosi said on MSNBC on Friday ahead of her conversation with Mnuchin.

As the coronavirus pandemic intensified in March and April, Congress approved $3 trillion in new spending to try to arrest some of the economic fallout. Lawmakers have struggled since then to approve another package, though, amid new signs that parts of the economy are weakening.

"He got a terrible backlash from it, including in the stock market, which is what he cares about," Pelosi said about Trump on MSNBC. "And so then he started to come back little by little, and now a bigger package. So we'll see what they have to offer."

Many Republicans are skeptical that Pelosi will agree to a deal that would give Trump something to brag about heading into the election. And there was no guarantee that any deal struck between Pelosi and Mnuchin would pass muster with Senate Republicans.

Senate GOP leaders have said any bill larger than $1 trillion would be difficult for many Senate Republicans to accept. In a provision that could further alienate some conservatives, the White House proposal would allow certain unauthorized immigrants to get stimulus checks.

Senate Majority Leader Mitch McConnell told an audience in Kentucky that he doesn't see a deal coming together soon out of a "murky" situation in which the participants in the negotiations are elbowing for political advantage.

"I'd like to see us rise above that like we did in March and April, but I think it's unlikely in the next three weeks," McConnell said. McConnell said later that "the first item of priority of the Senate is the Supreme Court," suggesting there isn't time to both process a covid relief bill and the nomination of Judge Amy Coney Barrett before the election.

McConnell has issued private warnings that many Senate Republicans will oppose a deal in the range that Pelosi is seeking.

"We do need another rescue package," McConnell said. "But the proximity to the election and the differences about what is needed at this particular juncture are pretty vast."

Moderates in both parties, especially some in tough reelection races, have been advocating for a new relief deal. But in the GOP these lawmakers are outnumbered by conservatives who are expected to push against the deal.

Rep. James Comer, R-Ky., who attended several events with McConnell in Kentucky on Friday, said that despite their support for the president, "a lot of conservatives are concerned about excessive spending."

"Until we get liability protection and spending under control, I don't think a lot of conservatives will be real excited to vote for another stimulus package," Comer said in an interview.

"I'm doubtful in the end something gets done in a big, big way. You've got to remember there are a lot of senators on the Republican side of the aisle who are not in cycle and one of the most damaging votes they could take is to spend another couple trillion dollars spent in a relief bill," said former House Majority Leader Eric Cantor, R-Va., who lost his seat to a conservative insurgent in 2014, in an interview on Fox Business. "There are some Republicans who still believe we have to deal with the increasing debt and deficit of this country."

In addition to money for cities and states and unemployment insurance, the new proposal includes aid for airlines and small businesses, and a new round of $1,200 stimulus checks. Both sides have supported those policies.

They also had appeared to settle on $75 billion for coronavirus testing and tracing, although Democrats continued to push the administration for language on a comprehensive testing strategy, something Pelosi said Friday remained unsettled.

Information for this article was contributed by Jeff Stein, Erica Werner and Josh Dawsey of The Washington Post; by Andrew Taylor and Bruce Schreiner of The Associated Press; and by Erik Wasson and Jennifer Jacobs of Bloomberg News.