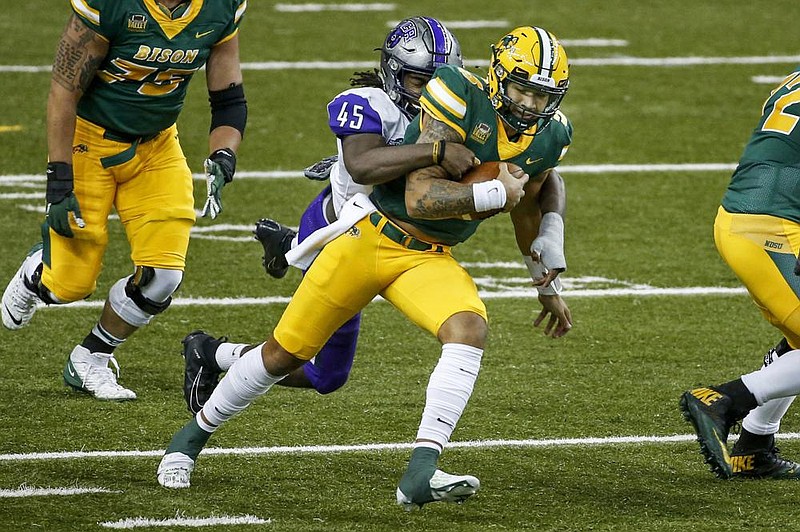 Going into the 2020 season, University of Central Arkansas Coach Nathan Brown made no bones about his defensive line being one of his team's strongest areas.

Four games in, he's not budging from that declaration.

Behind a core of senior-laden starters and a surplus of backups who see action on a regular basis, the Bears (2-2) have more than held their own against what Brown believes are reputable offensive lines on both the FCS and FBS levels.

He sees no reason why that unit wouldn't be able to continue its top-shelf play over the team's remaining six games.

"I'd give those guys an A right now," Brown said of his defensive line. "I think they are one of the biggest strengths of our team. A lot of experience, a lot of depth up there.

"I mean, really, we could probably go 9 or 10 deep and feel comfortable with it. A lot of our front-line guys get the notoriety, but we're able to keep guys fresh because we do have quality depth. They've done a good job, and it's come against some quality opponents."

The Bears will face another quality team today when they travel to Jonesboro to face Arkansas State University at 2:30 p.m. But for guys such as UCA defensive tackle Austin Norris, the matchup is simply another chance for his group to impose its will on another team in a different jersey.

"We're a group that thinks we can go head-to-head with anybody, especially in the state of Arkansas," said Norris, one of the Bears' senior leaders inside. "There's been a standard set on the D-line long before we got here, and we've got to uphold that standard. The physicality on that side of the ball starts with us.

"That mentality is carried over no matter who the opponent is. We respect [ASU], and we know they're good. Watching them beat a team like Kansas State was an eye-opener. But we know what we have to do up there. For us, it's just another game to set the tone."

Brown relies on Norris and the rest of his teammates on a defense that has forced 11 turnovers, the most by an FCS team this season. A number of those miscues occurred because of the pressure the Bears' linemen applied.

Yet, the primary objective for the Bears' defense is to stop the run, and that starts on the interior.

The final statistics may not reveal just how big of an impact UCA's defensive line made against the likes of Austin Peay and Alabama-Birmingham, the team's first two opponents, based on the combined rushing yards the two put up. But the Bears flexed their muscles in their past two games against teams from the Missouri Valley Conference, a league known for its physical style of play.

UCA allowed just 1 yard per rush and 42 yards on the ground total in its 27-20 victory over Missouri State on Sept. 26. The Bears' defensive line also had five of the team's nine sacks.

And last week against FCS top-ranked North Dakota State, UCA allowed 275 yards rushing, but 143 of those were from Bison quarterback Trey Lance on plays where his improvisation allowed him to escape would-be tacklers for big gains. They did sack him three times.

In all, 12 of the team's 13 sacks have occurred over the past two weeks.

"I think over the years, we're designed to stop the run, though," said UCA senior defensive end J.W. Jones, a preseason All-Southland Conference second-team pick who is third on the team in tackles with 22. "A lot of people try to run the ball on us, but once we stop that, we feel like we can get control of the game. All of us are good pass rushers, too.

"So once the third and fourth quarters start, teams start panicking some, and that allows us to kind of tee off."

The Bears -- whose average defensive lineman is 6-3, 283 pounds -- are hoping to dictate things against the Red Wolves. ASU is averaging just over 106 yards rushing, with Jamal Jones leading the way with a 55.7 yards per game. The Red Wolves have also allowed nine sacks through three games, but Brown isn't putting much stock into that.

"They're a little different and aren't like what we just faced in Missouri State and North Dakota State," Brown said. "Both of those teams have more of a pro-style mentality where they played with a fullback and tight end in the game at the same time. ASU is gonna spread you out a little more and may go side to side on you to create lanes.

"We also can't let Layne Hatcher or Logan Bonner get comfortable back there at quarterback, either. We'll have to do a good job of staying gap sound. If we don't, that could get us in trouble."