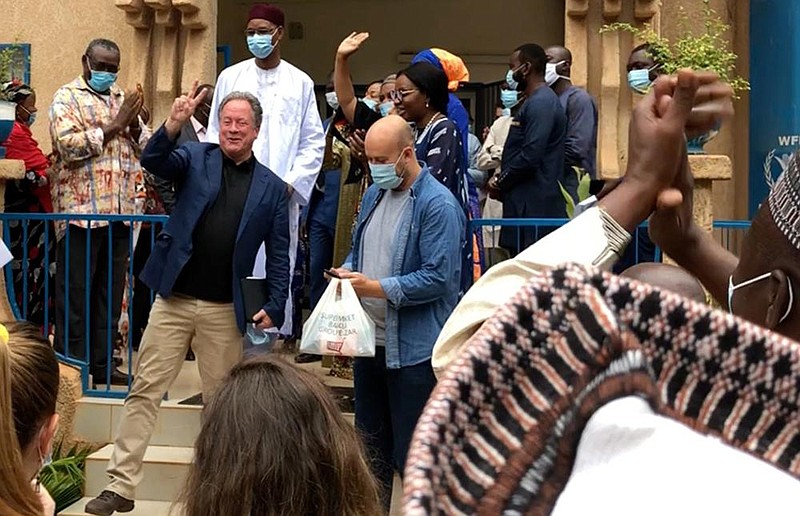 David Beasley (maskless, second from left), executive director of the World Food Program, celebrates with members of his staff Friday in Niamey, Niger, after the agency was awarded the 2020 Nobel Peace Prize. More photos at arkansasonline.com/1010worldfood/. (AP/World Food Program)

NIAMEY, Niger -- The World Food Program won the Nobel Peace Prize on Friday for fighting hunger and seeking to end its use as "a weapon of war and conflict" at a time when the coronavirus pandemic has driven millions more people to the "brink of starvation."

In bestowing what is arguably the world's most prestigious prize on the World Food Program, the Norwegian committee is honoring an organization headed by David Beasley, a Republican former South Carolina governor nominated for the job by President Donald Trump.

Beasley said the prize rightly goes to his entire team.

"I know I'm not deserving of an award like this -- but all the men and women around the world in the World Food Program and our partners who put their lives on the line every day to help those in need, that is inspiring and encouraging," he told The Associated Press by phone from Niger.

World Food Program staffers in Niger greeted Beasley with cheers and applause as he emerged to address a crowd after the announcement. "I didn't win it, you won it," he told them.

Announcing the prize, the Norwegian Nobel Committee said it wished "to turn the eyes of the world towards the millions of people who suffer from or face the threat of hunger."

The committee also said it hoped that bestowing the prize on the U.N. agency would highlight the need to strengthen global solidarity and cooperation.

"In the face of the pandemic, the World Food Program has demonstrated an impressive ability to intensify its efforts," Reiss-Andersen said as she announced the prize in Oslo. "The combination of violent conflict and the pandemic has led to a dramatic rise in the number of people living on the brink of starvation."

[Video not showing up above? Click here to view » https://www.youtube.com/watch?v=nP_F3RMxL6E]

The Rome-based agency was established in 1961 at the behest of President Dwight Eisenhower and has brought aid to multiple crises, including Ethiopia's famine of 1984, the Asian tsunami of 2004 and the Haiti earthquake of 2010.

It continues to bring assistance to the world's most dangerous and precarious places, from airdropping food in South Sudan and Syria to creating an emergency delivery service that kept aid flowing even as pandemic restrictions grounded commercial flights.

The choice of the World Food Program was particularly notable because the U.S. remains by far its biggest donor; the agency has been run by an American for nearly 40 years.

The Nobel Committee said the problem of hunger has again become more acute in recent years, not least because the pandemic has added to the hardship already faced by millions.

The program estimates that 690 million people worldwide suffer some form of hunger today.

U.N. Secretary-General Antonio Guterres said he was delighted the award went to "the world's first responder on the front lines of food insecurity." It was the ninth award for the U.N. or one of its agencies.

"In a world of plenty, it is unconscionable that hundreds of millions go to bed each night hungry," Guterres said. "Millions more are now on the precipice of famine due to the covid-19 pandemic."

The Nobel Committee called on governments to ensure that the World Food Program and other aid organizations receive the financial support needed to feed millions in countries such as Yemen, Congo, Nigeria and South Sudan.

"The world is in danger of experiencing a hunger crisis of inconceivable proportions if the World Food Program and other food assistance organizations do not receive the financial support they have requested," the Nobel committee said.

When the award was announced, Beasley was in Niger, after a visit to neighboring Burkina Faso -- two countries in the Sahel region of Africa that he said is "under attack by extremists and climate extremes" and going through "a devastating" time.

A logistics juggernaut, the World Food Program this year created a global emergency delivery service for humanitarian aid. Officials said the unprecedented effort involved nearly 130 countries and was key in ensuring that aid for the pandemic kept flowing in addition to other assistance, like the drugs and vaccines needed to combat other diseases.

As recently as this week, a World Food Program humanitarian convoy was attacked in South Sudan, drawing condemnation from the U.S. State Department.

"The women and men of the WFP brave danger and distance to deliver lifesaving sustenance to those devastated by conflict, to people suffering because of disaster, to children and families uncertain about their next meal," Guterres said in a statement Friday.

There was no shortage of causes or candidates on this year's Nobel list, with 211 individuals and 107 organizations nominated.

The Norwegian Nobel Committee maintains absolute secrecy about whom it favors before the announcement, but the World Food Program had been on the short list of Dan Smith, the director of the Stockholm International Peace Research Institute.

Some, however, noted that the World Food Program's top donors are also major food exporters and often involved in the sale of arms to conflict zones where the agency works, from Afghanistan to Yemen.

"This Nobel Prize is important to celebrate multilateral cooperation, to show solidarity between nations," said Frederic Mousseau, policy director at The Oakland Institute, a progressive think tank based in California. "But we should not ignore the hypocrisy of the richest nations engaged in and profiteering from the wars where they finance WFP interventions."

The agency also has been met with criticism that its food sourcing methods hamper already weak local food markets. The organization buys most supplies on the global market, and development experts have criticized it for offering contracts to major donors -- like the United States -- in what has come to be known as "tied aid," or the practice of tying humanitarian donations to purchasing contracts.

In response, it has pledged to eventually purchase 10% of its supplies from smaller local farms.

Its employees have at times also been accused by investigators, journalists and local groups of malpractice, such as stealing and selling food that is meant to be distributed for free. In a major operation in Uganda last year where the organization tried to feed thousands of refugees, four died and hundreds became sick, leading to internal investigations.

'A CALL TO ACTION'

The award comes with a gold medal and a $1.1 million cash prize that is dwarfed by the funding that the World Food Program requires for its work. So far in 2020, the organization has received almost $6.4 billion in cash or goods, with over $2.7 billion coming from the U.S.

On Monday, the Nobel Committee awarded the prize for physiology and medicine for discovering the liver-ravaging hepatitis C virus.

Tuesday's prize for physics honored breakthroughs in understanding the mysteries of cosmic black holes, and the chemistry prize on Wednesday went to scientists behind a powerful gene-editing tool.

The literature prize was awarded to American poet Louise Gluck on Thursday for her "candid and uncompromising" work.

The Nobel Memorial Prize for economics, which was only established in 1968, will be awarded Monday.

Beasley said the Nobel Peace Prize win for the World Food Program had turned an important spotlight on the millions who go hungry around the world and on the devastating consequences of conflict.

"It's the first time in my life I'm speechless," he said, adding that it was both wonderful and bad news to receive, because it highlighted not only the work being done but also the depth of the need for it.

Beasley said it was an "indictment of humanity" that anyone could want for food "in a time when there is so much wealth in the world."

"It's a call to action," he said of the prize. "The world is suffering more than in any time period, and we literally will be facing famines of biblical proportions if we don't act."

Information for this article was contributed by Dalatou Mamane, Frank Jordans, Vanessa Gera, David Keyton, Karl Ritter, Nicole Winfield and Patricia Thomas, Cara Anna and Jamey Keaten of The Associated Press; and by Megan Specia and Matina Stevis-Gridneff of The New York Times. 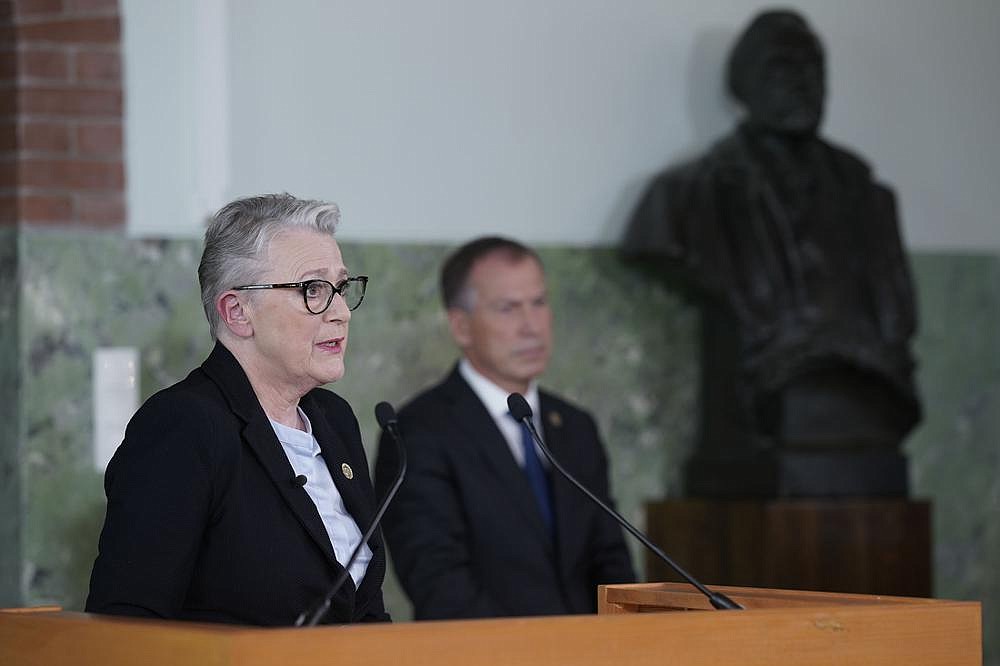 Berit Reiss-Andersen (left), head of the Nobel Committee, said Friday in Oslo, Norway, that the World Food Program “has demonstrated an impressive ability to intensify its efforts” to combat hunger and food insecurity in the face of the coronavirus pandemic. (AP/NTB/Stian Lysberg Solum) 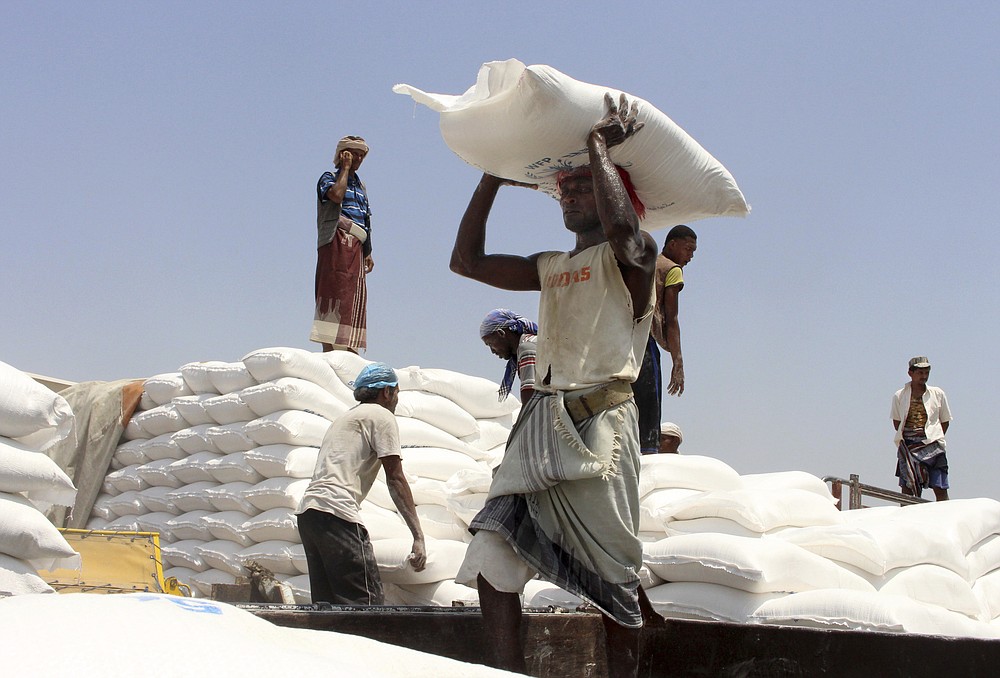 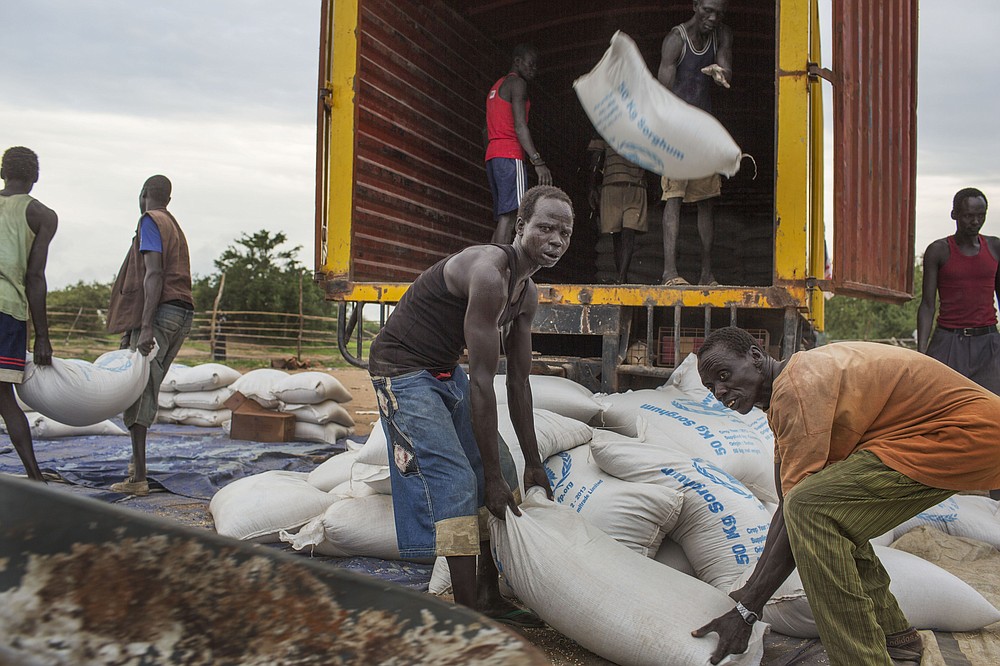 FILE - In this Thursday, June 26, 2014 file photo, workers offload sacks of cereals from the World Food Program (WFP) from a truck in Minkaman, South Sudan. The World Food Program on Friday, Oct. 9, 2020 won the 2020 Nobel Peace Prize for its efforts to combat hunger and food insecurity around the globe. (AP Photo/Matthew Abbott, File) 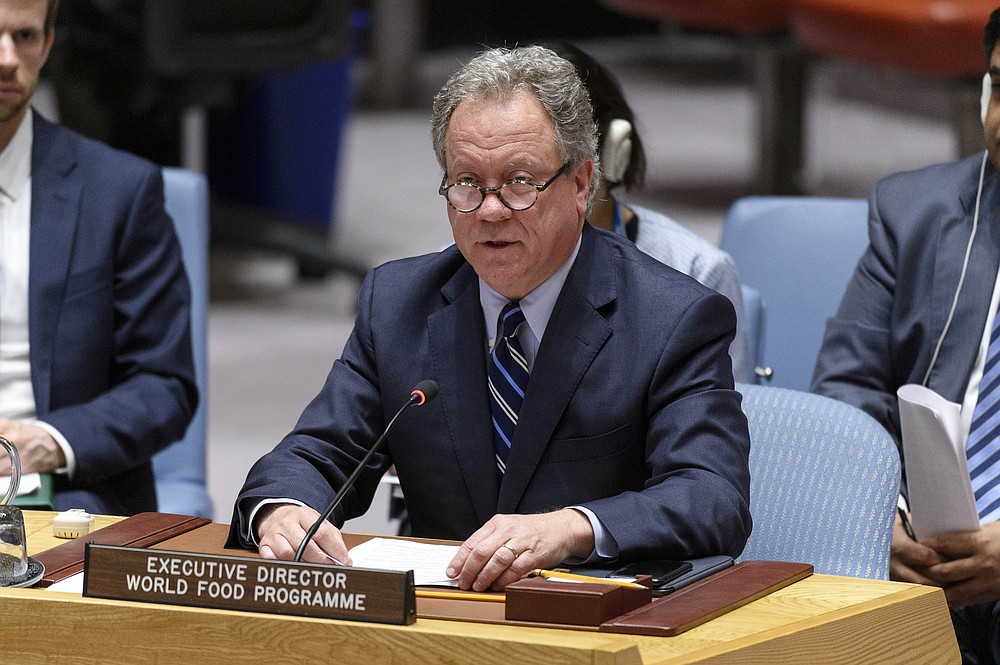 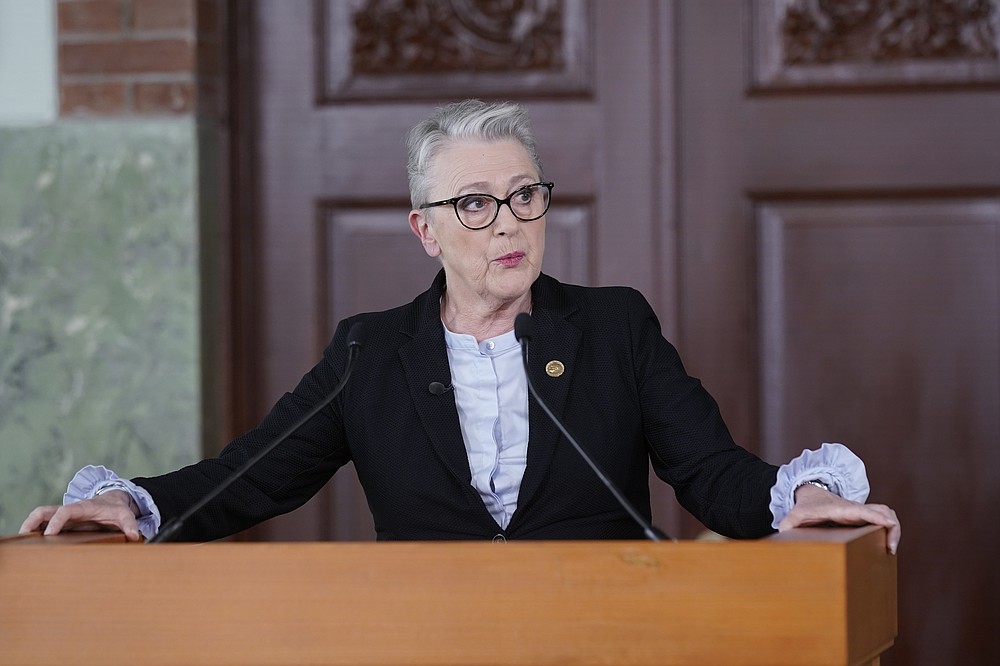 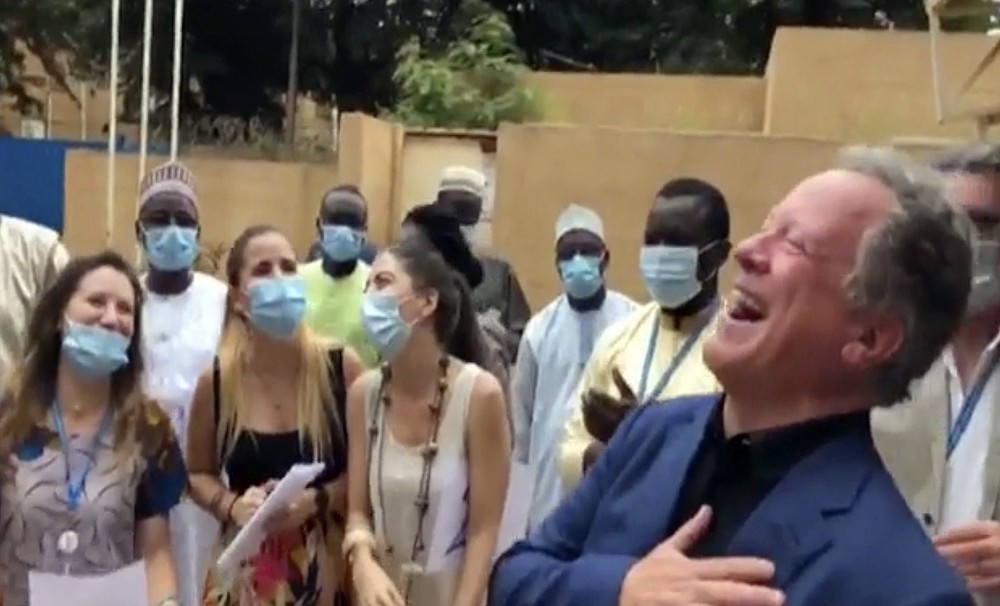 In this image taken from WFP video, David Beasley, Executive director of the World Food Program (WFP), center, celebrates with members of WFP staff in Niamey, Niger, Friday Oct. 9, 2020, after being awarded the 2020 Nobel Peace prize. The World Food Program has won the 2020 Nobel Peace Prize for its efforts to combat hunger and food insecurity around the globe. The announcement was made Friday in Oslo by Berit Reiss-Andersen, the chair of the Nobel Committee. (WFP via AP) 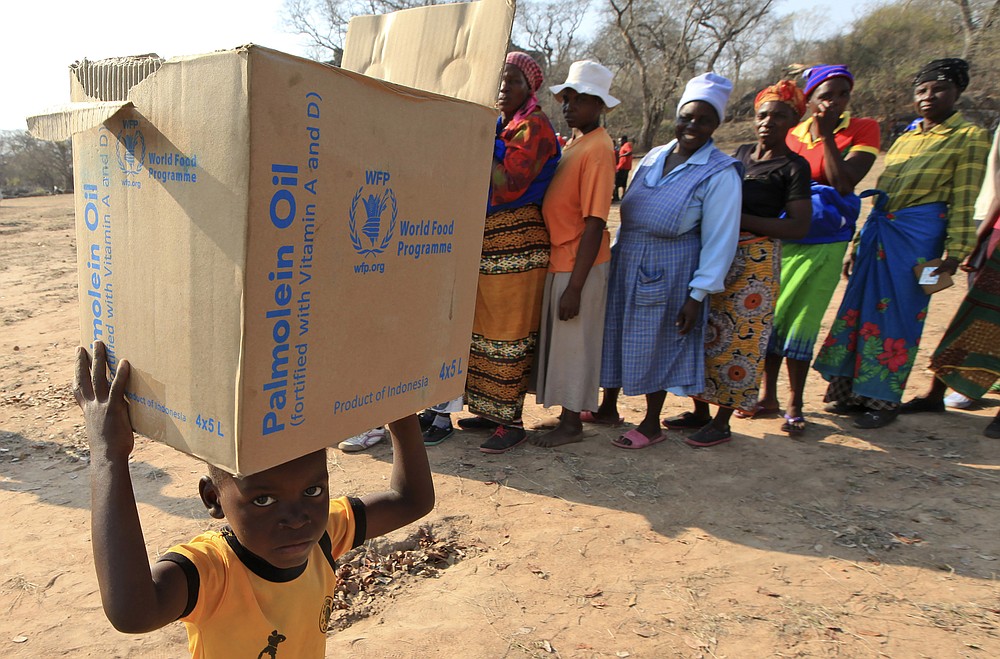 FILE - In this Sept. 9, 2015 file photo, a child carries a parcel from the United Nations World Food Program (WFP) in Mwenezi, Zimbabwe. The WFP has won the 2020 Nobel Peace Prize for its efforts to combat hunger and food insecurity around the globe. The announcement was made Friday Oct. 9, 2020 in Oslo by Berit Reiss-Andersen, the chair of the Nobel Committee. (AP Photo/Tsvangirayi Mukwazhi, File) 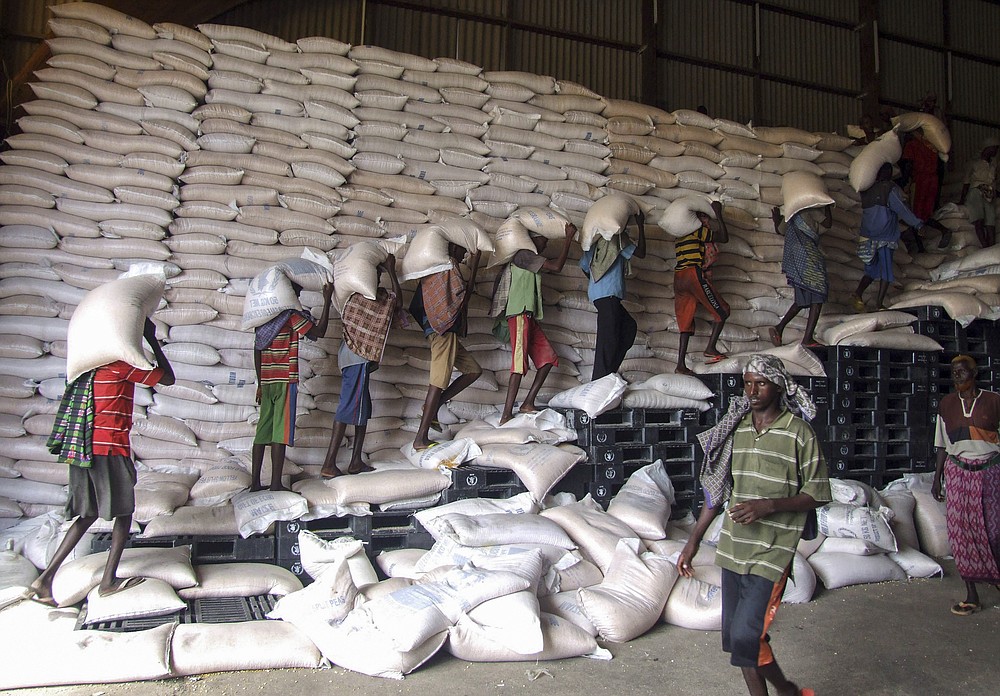 FILE - In this Wednesday, May 19, 2010 file photo, Somali porters offload sacks of a maize shipment from the World Food Program (WFP), intended for distribution to the many thousands of needy internally displaced persons in the country, into a warehouse in the seaport of Mogadishu, Somalia. The World Food Program on Friday, Oct. 9, 2020 won the 2020 Nobel Peace Prize for its efforts to combat hunger and food insecurity around the globe. (AP Photo/Mohamed Sheikh Nor, File) 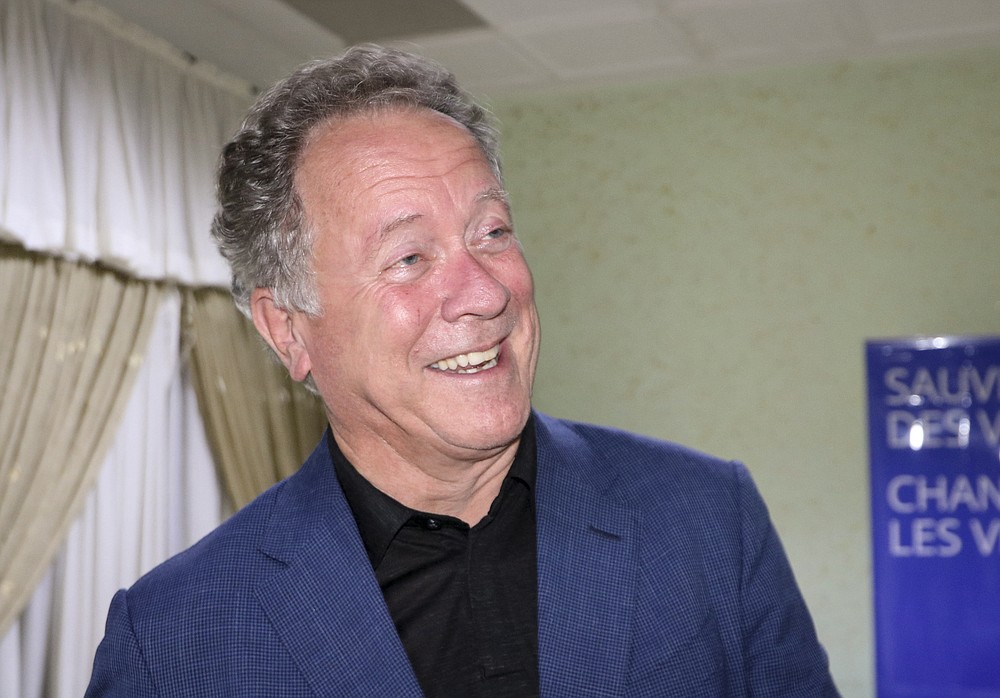 World Food Program (WFP) Executive Director David Beasley speaks to the media about the organization's Nobel Peace Prize win, at the airport in Ouagadougou, Burkina Faso, late Friday, Oct. 9, 2020. The World Food Program won the Nobel Peace Prize on Friday for fighting hunger and seeking to end its use as "a weapon of war and conflict" at a time when the coronavirus pandemic has driven millions more people to the brink of starvation. (AP Photo/Sam Mednick)
ADVERTISEMENT