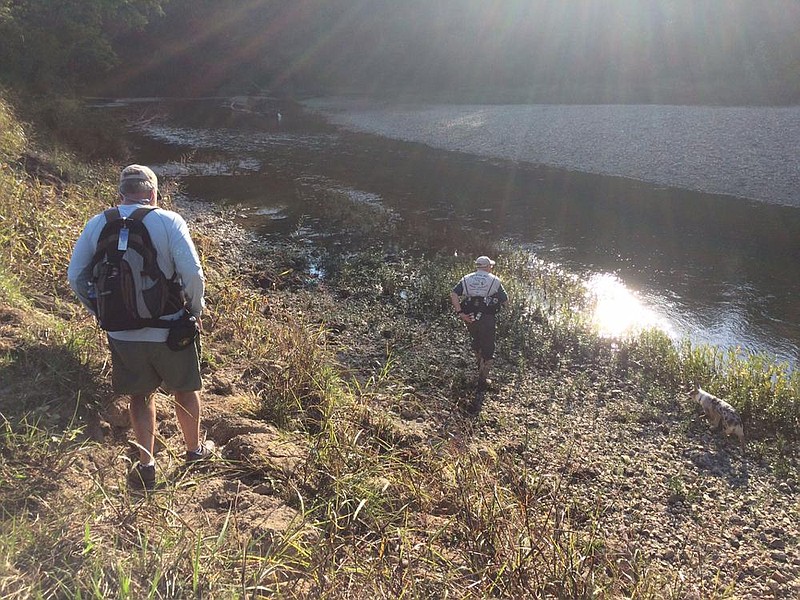 Shane Goodner of Catch 'Em All Guide Service kicked off the tribute with Joe Volpe of Little Rock by dedicating the outing to the late singer/songwriter Johnny Nash; the late Bob Gibson, Hall of Fame pitcher for the St. Louis Cardinals; and, of course, the late Eddie Van Halen, all of whom died between Oct. 2-6. They were giants of our generation, giants to their professions and monuments to excellence in their respective crafts. We felt obliged to do them justice.

In 2017, Ray Tucker and I set a record with Goodner on the South Fork of the Ouachita by catching 86 bass. In 2019, Volpe and Goodner claim to have broken that record with 87 fish. Tucker couldn't attend, but Goodner said we would be lucky to catch 35 on account of low water, clear skies, bright sunshine and a transitional fall fishing phase.

"And we shouldn't be disappointed with 35, gentlemen," Goodner said in a staccato patter that would shame the slickest auctioneer.

"Oh, here we go with the poor mouth already!" Volpe retorted. "Give me a break, man! You say the same thing every time."

"Let me remind you of the golden rule, Joseph," Goodner said imperiously. "The guide is never wrong. An addendum to that rule is that you don't argue with the guide. You can, in rare situations, dispute the guide, keeping in mind that the guide is the final authority."

"Said the man fishing with a federal magistrate," I quipped.

"Joseph is the king of his courtroom," Goodner said, "but I am the king of this river." This prompted a barrage of taunts that Goodner parried with deadpan indignation.

Goodner's conviction for a modest catch wavered early when we put four bass on the board mere minutes after entering the river. On such a cold morning in a cold river, Goodner did not expect fish to bite until about 11 a.m., so we dawdled in several small, narrow holes near our entry point. Goodner was trying to time our arrival to the best holes with onset of peak fish activity.

"When that sun gets up, the fish will start moving around a little and hopefully get a little more aggressive," Goodner said. "For the next couple of hours I expect them to hold tight to cover. To catch them, we'll have to hit them in the head."

Goodner uses a precise method for fishing a creek. He leads the procession and throws a custom white bucktail buzzbait.

"That buzzbait gets them stirred up," Goodner said. "They might not bite it, but it lets every fish in the hole know that something's going on."

"It gets them stirred up," Volpe said sarcastically.

Goodner did not set the hook on his strikes. Instead, he ordered Volpe to throw a Zoom Baby Brush Hog behind him. I have never had any luck catching stream bass with the Baby Brush Hog. I use the smaller Tiny Brush Hog, but Goodner forbids companions to use their own baits.

"It's more the movement and the flash," said Goodner, holding up a watermelon/red flake specimen. "See, it's got all this red in it, with kind of a three-dimensional effect, so it catches light and reflects light really well. The fish can see it."

As the sun ascended, it illuminated large portions of the pools. Goodner said that most of the big fish were in the shade, so we concentrated on deep cuts on shady banks. The fish were true to Goodner's word, and before 10 a.m., the numbers crept skyward.

"Gentlemen, I think 50 is a possibility," Goodner said.

Volpe elbowed me and winked.

Fishing behind two excellent anglers left me scrounging for scraps that fell from their table. I cast into the tightest cover to get fish that Goodner and Volpe overlooked. I put one such cast in a tight little gap between submerged branches on a downed tree in the middle of a narrow run. The branches broke the current and created a tiny, deep pocket. The Brush Hog landed in the only place it could without snagging.

"Shane, how would Eddie Van Halen fish this hole?" I asked.

"The only way Eddie did anything," Goodner said. "Wide open."

A fish hammered the lure the instant the words left my mouth. I let out a scream that would make Sammy Hagar proud as I wrestled a chunky smallmouth bass out of the tangle. Goodner caught one beside the tree at the same instant.

"I dedicate this one to Eddie," I said, presenting the fish to Goodner before releasing it. "We fished it the way Eddie would have fished it."

We also caught several "Bob Gibson" fish pitching high and inside. The entire bright, bright, sunshiny day was a tribute to the great Johnny Nash.

Goodner was right about the quality of the fish. We caught a few little ones, but most were 14 inches or longer. The majority were big spotted bass, but we caught a lot of smallmouths, too. Their eyes were as red as rubies. We also caught about 10 largemouths, including one that ran about 2.75 pounds.

Shortly after, as we stopped to free one of my errant casts and retie, a phalanx of big bass materialized from the shade and hovered about 6 feet from us. I threw beyond one big Kentucky bass that dashed out and grabbed the lure. Five or six big smallmouths tried to take the lure out of its mouth. I caught one of the smallmouths on the next cast. Volpe caught four or five more standing beside me.

That episode showed us that we had, despite our success, been fishing too fast. We slowed down, and the catch rate accelerated.

"See, gentlemen, that right there is a sterling example of turning a negative into a positive," Goodner said. "These fish just cruise up and down these pools. You never know where or when they'll show up."

By noon, the water had warmed by a few degrees. Bass started smashing Goodner's buzzbait, and he started setting the hook a lot more often, increasing the count dramatically.

"Gentlemen, 60 is in reach," Goodner said as we neared the last two pools. "We've got one hour and 20 minutes to get 'er done."

Our final count was 71, but I have no doubt we could have caught 100 if we'd had the time. You need a theme song for such an occasion. Eddie Van Halen's "Eruption" was the only choice.