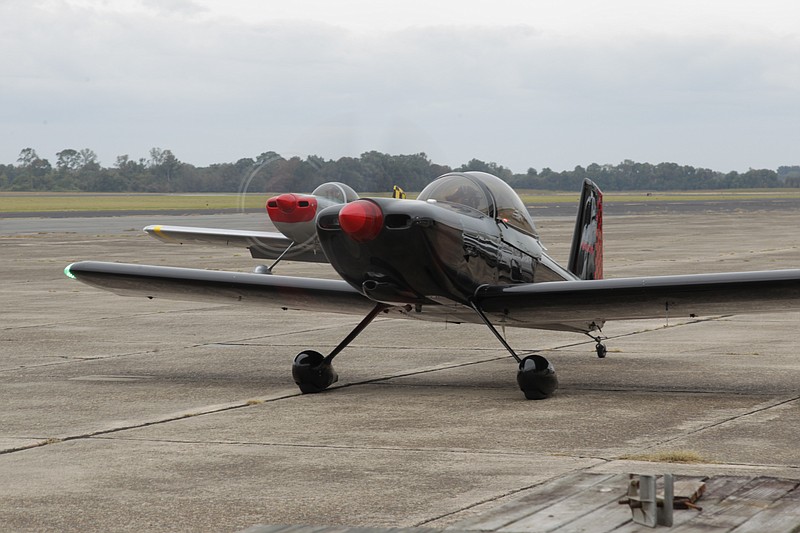 Two RV experimental aircraft sit on the tarmac at Grider Field this weekend, engines running, preparing to take off as part of a four-ship formation fun as pilots sharpen their formation flying abilities with highly experienced formation pilots there to critique and grade their performance. These homebuilt aircraft can be assembled for as little as $50,000 or can be customized with premium engine, communications, and avionics options that can easily top $250,000. (Pine Bluff Commercial/Dale Ellis)

Editor's note: This is part two of a two-part series.

Pilots will take to the air from Grider Field today, heading home to a number of destinations at the conclusion of the weekend's formation flight clinic for experimental, home-built aircraft such as the RV-3 single-seater and the RV-14 side-by-side two-seater.

Gerald "Bulldog" Lloyd of Dumas, the Bulldog of Bulldog Flight Formation Team -- which sponsored the weekend flight clinic and offered testing for pilots seeking to earn the FAA Formation Card that provides authorization to fly in formation in FAA-waivered airspace such as air shows and sporting events -- said the RV is the gold standard of home-built aircraft.

Since the 1970s, many owner-builders have turned to a small Oregon company, Van's Aircraft, for aircraft building plans and kits offering every level of build-out for home-brew aircraft. Those include total do-it-yourself efforts and partially assembled quick-build kits for pilots to assemble and customize with a variety of engine, cockpit and communications options. The company was founded in 1972 by Richard "Van" VanGrunsven, who started off selling plans and a few parts for his first airplane, a single-seater dubbed the RV-3.

Since that time, Van's Aircraft has expanded to offer various levels of build kits, from plans to a "quick build" option for seven different models, and from the original RV-3 single-seat model to the RV-14 side-by-side two-seater aircraft.

"He has kept track of the ones that have been completed and flown, and that number went over 10,000 a couple of years ago," Lloyd said. "There are a lot of major aircraft companies that haven't built 10,000 airplanes. And he doesn't tell anyone how many sets of plans and kits he's sold. He only tells the number that were finished."

A few of those planes were built just from plans by people who had the ability to fabricate their own parts, but most, Lloyd said, were built from partially assembled kits.

"Back in the 1980s, you could get a starter kit that included the plans and the tail section pretty cheap, and his sales pitch on that was if you could build the horizontal and vertical stabilizers, the elevator and rudder, which is the tail kit, you can build a whole airplane."

Lloyd started building his RV-4 airplane in 1987 as a family project and completed it in 1991, starting with plans and a tail kit that he purchased for less than $1,000.

"I got a tail kit and taught my kids how to buck rivets, and the whole family joined in," he said. "We built it in a Sears lawn building in our backyard. We started with the tail kit and just kept building a section at a time until it was finished."

Lloyd said kits, beginning with the tail kit, can be purchased a section at a time, including separate wing kit, fuselage kit, and the finishing kit with landing gear, brake assembly, engine mount, canopy and fiberglass finish pieces such as wingtips and fairings, allowing builders to complete their airplanes a section at a time as their budgets allow.

"That way you can pay as you go, and by the time you finish one section, hopefully you've saved enough to buy the next kit," he said. "Eventually, you wind up with an airplane ready to fly."

Another option, he said, is the quick-build kit, which comes with most of the major components ready to put together, but which comprises less than 50% of a completed aircraft. For the aircraft to be licensed as an experimental, home-built airplane, Lloyd said, the at-home builder must do at least 51% of the construction.

"That's to keep him from going out and hiring someone to build a plane for him that's not certified," he explained. "All you have to do is complete all of the control surfaces, linkages, and rivet the skin, install your instruments, radios, seats, and everything. From the firewall forward, you do that depending on what engine you use and all of that."

Lloyd said it took him three years to get his airplane project to the level of the quick-build kit, and from that point, he said, it took about another year to complete.

Lloyd said the RV kit airplanes are the avenue that many aspiring pilots have followed to get into aviation, as an RV can be completed with engine and cockpit instruments for as little as $50,000 while even a Cessna 172 can cost upward of $200,000 new.

But cost isn't the only factor, he said, especially considering that with different engine options, high-tech avionics, custom paint, and other options available to builders, an RV can quickly begin to rival the cost of a base model, entry-level Cessna. Some pilots, he said, simply enjoy the feeling of flying planes they built themselves.

Hillger bought his RV-7 partially completed from the original buyer, whom he said gave up on the project, which was purchased as a quick-build kit.

"I bought that, and it still took 2½ years to build," Hillger said, adding that during his full-time job on a drilling rig, he would order parts to assemble during his off time.

"It got so the UPS guy would get to my house about two days before I'd get off work," he said, with a laugh.

"Yeah," Shaw laughed. "There's nothing worse than reaching for a part and it's not there."

Shaw said his RV-7A was completed in 2017, at which point his flying time increased considerably. But before that, he said, the construction project consumed him.

"I had a Cessna 182 staring me in the face the whole time I was building it, and I only took out maybe once a month," he said. 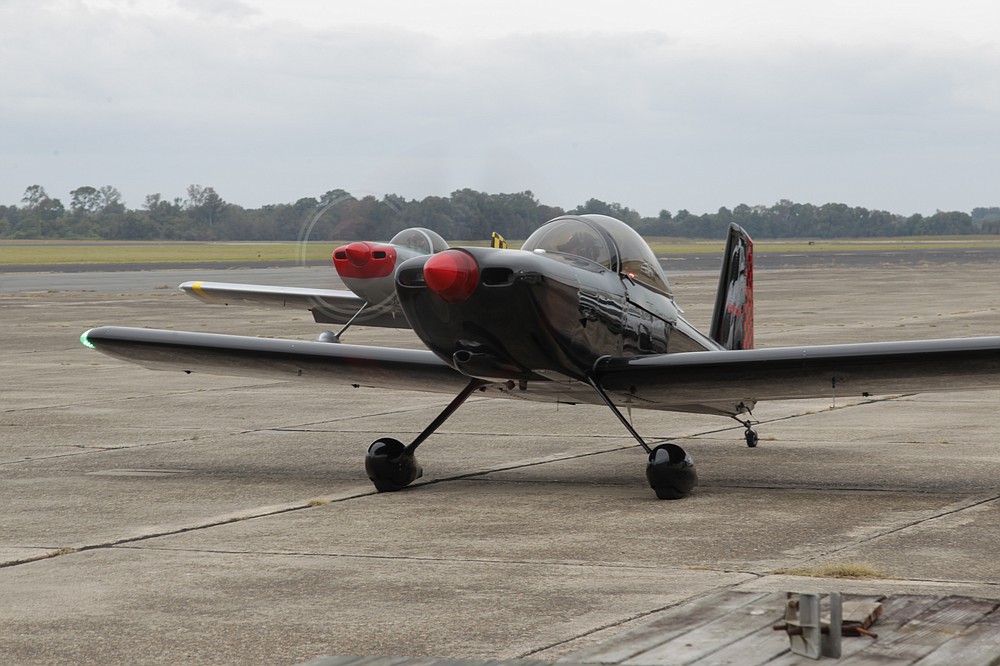 Two RV experimental aircraft sit on the tarmac at Grider Field this weekend, engines running, preparing to take off as part of a four-ship formation fun as pilots sharpen their formation flying abilities with highly experienced formation pilots there to critique and grade their performance. These homebuilt aircraft can be assembled for as little as $50,000 or can be customized with premium engine, communications, and avionics options that can easily top $250,000. (Pine Bluff Commercial/Dale Ellis) 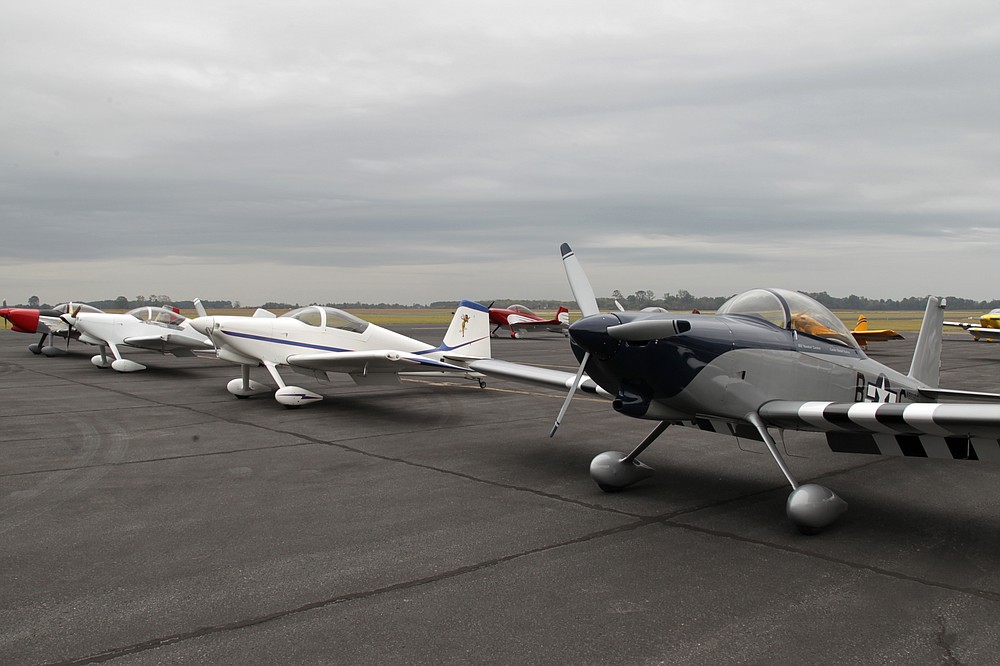 RV experimental aircraft parked in formation at Grider Field Friday during the weekend formation flight clinic sponsored by the Bulldog Formation Flight Team, headed by Gerald "Bulldog" Lloyd, who has been flying his own RV-4 airplane since he completed building it as a family project in 1991. (Pine Bluff Commercial/Dale Ellis) 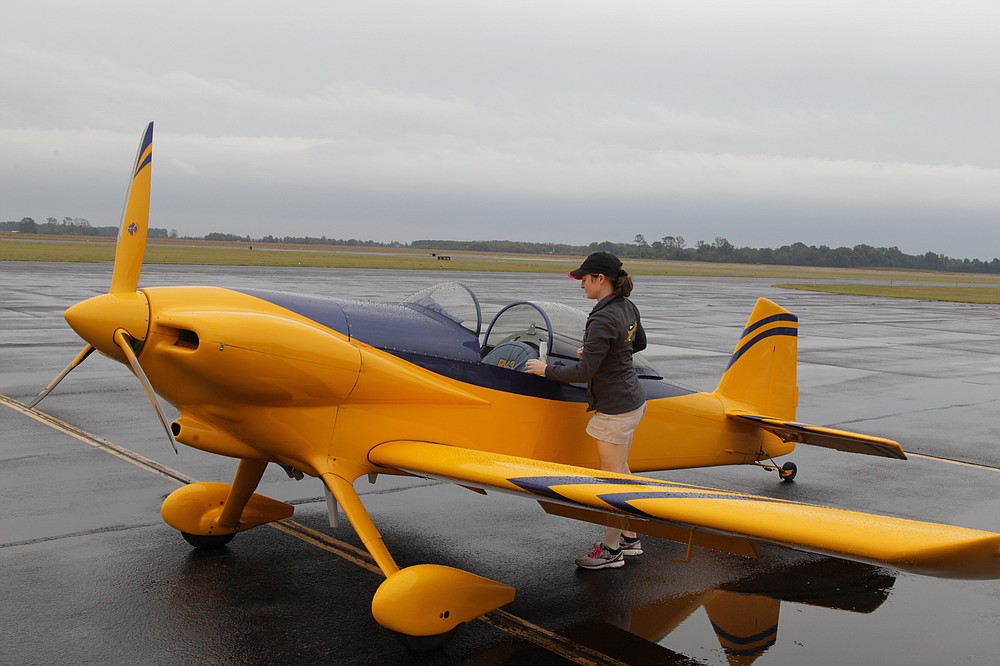 Little Rock pilot Angela "Scrubs" Palmer buttons up her RV-3 single-seater airplane following her "checkride" test Friday during which she tested to earn her FAA Formation Card authorizing her to fly formation over FAA waivered airspace, such as airshows and sporting events. The RV-3 is the first model to be marketed by Van's Aircraft when the company was founded in 1972. (Pine Bluff Commercial/Dale Ellis)
ADVERTISEMENT