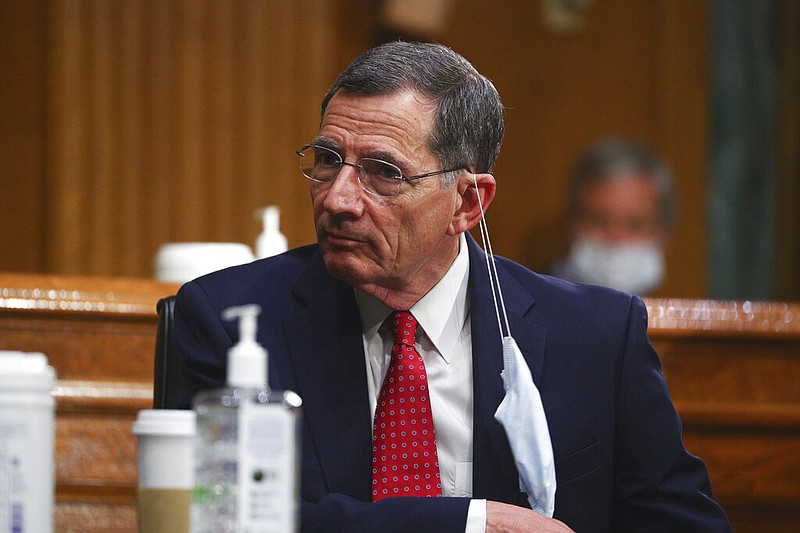 Sen. John Barrasso, R-Wyo., removes his protective face mask on Capitol Hill in Washington in this June 18, 2020, file photo. Barrasso is one of several Senate Republicans who raised objections Saturday, Oct. 10, 2020, to a new $1.8 trillion economic-relief proposal. Barrasso called the proposed expansion of Affordable Care Act tax credits to the unemployed “an enormous betrayal” of the GOP’s longstanding opposition to the health law.

On a conference call Saturday morning with Treasury Secretary Steven Mnuchin and White House Chief of Staff Mark Meadows, several GOP senators denounced the proposal, saying the price tag was too big, questioning the overall direction and criticizing individual proposals, according to people who participated in the call or were briefed on its contents. They spoke on the condition of anonymity to detail the private discussion.

Sen. John Barrasso, R-Wyo., called a proposed expansion of Affordable Care Act tax credits to the unemployed "an enormous betrayal" of the GOP's long-standing opposition to the health law.

"I don't get it," said Sen. Rick Scott, R-Fla., of the giant spending proposal that incorporates a number of Democratic priorities that are anathema to the GOP.

Sen. Marsha Blackburn, R-Tenn., predicted that advancing such legislation would prove the "death knell" of the GOP majority.

Sen. Mike Lee, R-Utah, said that the deal could complicate floor timing as the Senate tries to fill the Supreme Court vacancy this month, and hurt Republicans at the ballot box because the Supreme Court fight would no longer be front and center.

Meadows told the group at one point, "You all will have to come to my funeral" because he would have to take their message back to President Donald Trump. The president has begun pushing for a big new spending deal he hopes could boost his reelection chances, reversing course after he pulled the plug on talks earlier in the week. Mnuchin sent the White House's latest offer Friday.

Almost at the same moment Senate Republicans were on the conference call, Pelosi released a letter to House Democrats that signaled the White House proposal would need significant changes.

"This proposal amounted to one step forward, two steps back. When the president talks about wanting a bigger relief package, his proposal appears to mean that he wants more money at his discretion to grant or withhold," she stated in the letter.

Pelosi said the president's offer did not contain enough spending for unemployment insurance, state and local aid, child care, or other Democratic priorities. She said it also includes "reckless" language on liability protections for businesses and others. House Democrats have been pushing legislation with a $2.2 trillion price tag.

"Despite these unaddressed concerns, I remain hopeful that yesterday's developments will move us closer to an agreement on a relief package that addresses the health and economic crisis facing America's families," Pelosi's letter said.

Senate Majority Leader Mitch McConnell, R-Ky., already has voiced skepticism about the prospects for passing a new coronavirus bill ahead of the election.

White House and Treasury Department officials did not respond to requests for comment on Pelosi's letter or on the concerns being raised by Senate Republicans.

Saturday's developments left uncertain whether there was any path forward for a new relief bill, despite millions out of work and numerous signs the economic recovery has slowed. Federal Reserve Chairman Jerome Powell warned just days ago that without additional stimulus there could be a "a weak recovery, creating unnecessary hardship for households and businesses."

Congress passed four bipartisan bills totaling an unprecedented $3 trillion in new spending in March and April, but since then lawmakers have failed to reach any new agreement and many of the programs approved in the spring have expired. Talks have been revived only to fall apart again several times.

After announcing Tuesday that he was ordering Mnuchin to stop negotiating with Pelosi, Trump changed course after the stock market fell, and some Republicans facing tough reelection races questioned his move. Sen. Susan Collins, R-Maine, was among a handful of senators who spoke up on Saturday's call in favor of a new relief bill -- though not necessarily the specific deal Mnuchin has offered Pelosi, people familiar with the call said.

"I would like to see a bigger stimulus package, frankly, than either the Democrats or the Republicans are offering," Trump said on Rush Limbaugh's radio program Friday, adding that he's going in the "exact opposite" direction from his earlier stances.

Democrats' $2.2 trillion plan, passed by the House earlier this month, is down from the $3.4 trillion package they approved in the chamber in May.

That proposal includes provisions many people in both parties support, including a new round of $1,200 stimulus checks, small-business support and aid to airlines that have begun mass furloughs after federal aid expired Sept. 30.

But in other areas -- including unemployment insurance -- the two sides are far apart on the price tag, with Democrats supporting $600 enhanced weekly unemployment benefits, while the administration proposal provides for $400 on top of what states already are paying.

Senate Republicans backed a bill offering about $650 billion last month, showcasing the gulf with the House.

The new administration offer includes $300 billion in state and local aid, an increase from $250 billion in an earlier proposal. But it still falls short of what Democrats want -- while at the same time it's too much for many Republicans. Excessive state and local aid spending was another concern voiced by GOP senators on Saturday's call.

Overall, Sen. Lamar Alexander, R-Tenn., told Meadows and Mnuchin on Saturday, there's not much appetite to spend at the levels proposed by the administration.

Additionally, the administration proposal includes some items that Republicans view as poison pills. Republicans say the expansion of the Affordable Care Act raises concerns about taxpayer funding of abortions, although Democrats dispute that interpretation of the provision. It also would allow certain people illegally in the country to receive stimulus checks, another nonstarter for many Republicans.

Despite the strong opposition expressed to the most recent proposal offered by Mnuchin, many senators on the call generally indicated they wanted Mnuchin and Pelosi to keep talking, according to the people familiar with the discussion.

Crafting a bill before the election may prove a hurdle too high. McConnell said Friday that there's probably not enough time.

Information for this article was contributed by Erica Werner and Jeff Stein of The Washington Post; by Erik Wasson of Bloomberg News; and by Andrew Taylor of The Associated Press.