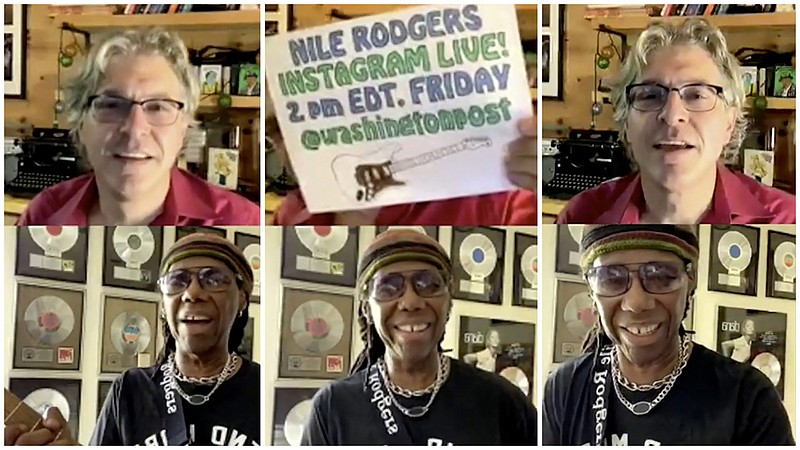 Q: You told me that at one point, you were getting called by famous people who wanted you to make their disco album. Including Frank Sinatra.

A: At some point in time, disco was so dominant in the music scene, everybody figured that all they had to do was a disco record and they'd have a hit record. A very famous flutist named Herbie Mann had a record called "Hijack." A woman named Esther Phillips made "What a Diff'rence a Day Makes" with the jazz guitar player Joe Beck. So people just thought, that's what you've got to do, make records that people want to dance to and you get a hit. And Frank Sinatra was no different from anyone else. He loved having hit records.

A: Aretha wanted us to make a record called "I'm Going to Be the Only Star Tonight Down at the Disco." And (producer) Bernard (Edwards) and I flatly refused. But we felt so bad. We're like, "Wait a minute. Give us a chance. Let us make an ultra-soulful Aretha record. You do not have to do a disco record. You're the Queen of Soul." But sometimes record companies, they just get in an artist's head and they think that that's what they have to do. And maybe she believed that, too. But we wouldn't do it. And a guy named Van McCoy, who did a song called "The Hustle," he did the record.

Q: You wrote an amazing autobiography. Tell us about how you ran into a bunch of people dressed like Diana Ross at a club.

A: During the Studio 54 era, clubs in midtown Manhattan were just the thing. So every night we would go club-hopping. On this particular night, I went to a club called GG's Barnum Room. It was a trans club, and this one time I walked into the bathroom and I happened to be producing Diana Ross. There were all these Diana Ross impersonators in there. And because it was so early in my career, I couldn't even say, "Oh, guys, you know what? Oh, man, I'm producing Diana Ross" because they would've thought I was lying. I'd only done Chic and Sister Sledge.

Then I went outside to a phone booth, called my partner up, and I said, "Yo, Bernard, please do me a favor." And he was like, dead asleep, like "What, what, what, what's going on?" I said, "Look, write down 'I'm coming out.'" "What do you mean, man?" I said, "Please, just write down the words 'I'm coming out' because I'm going to stay up all night. I'm going to get drunk and I'm going to forget this. I was standing in the bathroom with six or eight dudes dressed up like Diana Ross. And if we do a song called 'I'm Coming Out' we will recognize the gay community's admiration for Diana Ross." And he didn't quite get it. And I said, "Dude, it'll be like James Brown saying, 'Say it loud. I'm Black and I'm proud.' " And Bernard started laughing and said, "I get it!"

Q: Of all the people you've produced, who do you miss working with the most?

A: It was the person that I never actually got the opportunity to work with, although he begged me over and over again. It would have been Miles Davis. We would go out partying and hanging out and talk and just talk. We became really great friends. And then finally one night, he popped the question about working together, and I said, "What? You're Miles Davis!" And I went home. I can't believe this. I was such a jerk. I started writing a whole bunch of fusion jazz songs, and he would call me up and go, "Man, I can write that. I want you to write me a 'Good Times.' Come on. Would you do it?" And I didn't take him seriously because Miles had this very dark sense of humor. And I thought that as soon as I wrote him a sort of R&B funk song, he would sit back at me like, "Man, get out of here with that, and embarrass me in front of a roomful of people." So I never took him up on it. But I realized at the end of his life when he was covering Michael Jackson songs and things like that, "Miles wants a hit, he wants to be on the pop charts."

Q: You and your girlfriend, Nancy Hunt, run the We Are Family foundation. And I know you have a new youth initiative.

A: Right after the George Floyd murder, we as an organization thought, "What can we do?" (Floyd was killed in police custody in Minneapolis on May 25.) I mean, we started an organization about tolerance and diversity back in 2002, but what can we now do? We're really good at finding these incredible young people that are doing good in the world. And we support them, mentor them. So it was a really easy pivot for us to say we should now specifically create a fund where we are finding those young people. And we've actually increased the age. Not just teenagers, but up to 29 years old who are doing extraordinary work in the area of systemic racism, inequity, injustice, and not just in America, but around the world. We launched it in June and had to close down the applications at the end of July because we got inundated.