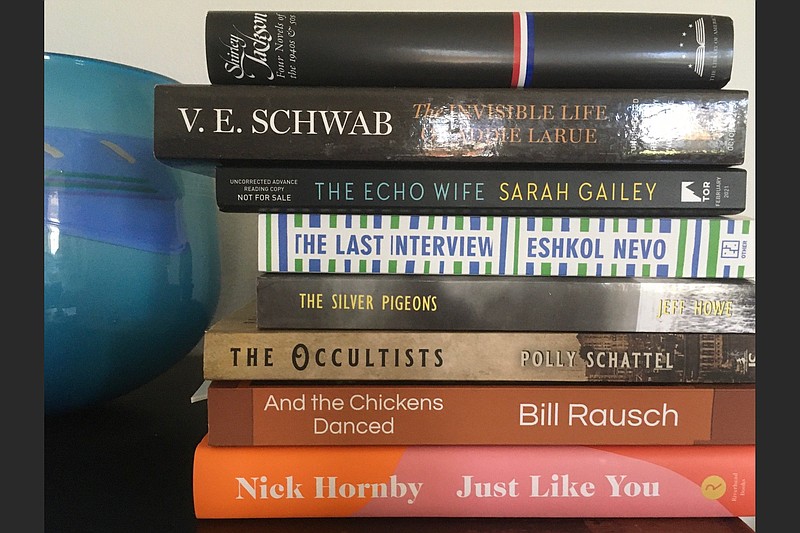 There's no review this week because I've been waylaid by Derek B. Miller's "American by Day" and "Norwegian by Night," but I've been meaning to get around to these ... . (Arkansas Democrat-Gazette/Philip Martin)

Another weird bad nasty mean thing about 2020 is the ongoing disruption of the book publishing business.

The past few months have seen a relative dearth of high profile releases from major publishers — lots of titles were delayed as houses and printers and warehouses shut down. It has only been in the past couple of weeks that Knopf and the Library of America have announced that they're going to resume shipping new titles to bookstores (and review copies to critics). Just last week, the new LOA volume "Shirley Jackson: Four Novels of the 1940s & 50s," which will be officially released on Oct. 20, arrived. I think it was the first review copy I've received from a "major" publisher since David Hill's "The Vapors" — the story of how illegal gambling rose and fell in Hot Springs — arrived in early March.

(I would have written about "The Vapors" except everyone else beat me to it. There have been at least four pieces in this newspaper about it, and I believe there's at least one more in the works. While I loved the book, I'm not sure I could have added anything of substance to the conversation.)

But, in the interim, there have been plenty of books show up, far more than this column can accommodate. They have come from smaller presses, academic presses, freelance publicists and the authors themselves. I can't write about them all, but we try to give them a fair hearing. One thing that's certain is that the imprimatur of a major New York-based publishing house is no longer (never was) any guarantee of quality.

And while self-published books might still bear a "vanity press" stigma, it's become so easy and inexpensive to go that route I'm surprised more authors haven't.

As an experiment, I recently self-published a book through Amazon's Kindle Direct Publishing e-book publishing service. It cost me exactly nothing, because I designed the cover and formatted the text. (The only mildly annoying thing about the project is that I now see a lot of pop-up ads for and receive occasional emails from companies offering to provide those services for fees starting around $50.)

While it's exclusive to Amazon's Kindle service for some period — I believe 90 days — readers have the option of either downloading a $9.99 Kindle version (which you can read on an iPad if you download the free Kindle app) or ordering a print-on-demand hard copy. While the print on-demand option feels pricey to me (the lowest I could set the price for my book was $29.95), everything above Amazon's printing costs and fees (about $11) goes to the author.

So basically it's free, and there's a high royalty rate. While I intend to go the traditional publisher route with my next book, if you want to get a book "out there" I don't see much of a downside with this method.

Of course, you're left up to your own devices on how to publicize your book, and it's harder to get a self-published book reviewed (it used to be that most newspapers had a bright-line rule against reviewing self-published books, which was a useful diplomatic tool in the days when editors were flooded with review copies). But now few newspapers review books anyway, and anyone can pay a fee ($425 to $575) to have their book reviewed by Kirkus Reviews.

Kirkus doesn't guarantee a good review, but they do give you the option of reviewing your review beforehand and having it withheld from publication. (I'm a little scandalized by this; I've been reviewing books since 1983 and I only found this out last week thanks to a guileless author who admitted he'd ponied up for a Kirkus review.)

Anyway, for the past few years, I've paid little attention to the provenance of a given book — bad editing and cheap graphics put me off, but I'm willing to give anything a chance. Most of my favorite books from the past few years have been from presses I'd never heard of before I received the book. The digital disruption of publishing has had some negative effects — the democratization of publishing means a lot of bad books that wouldn't otherwise be published are being published — but for a consumer, it's a good deal.

And it has never been easy to make a living as a writer, despite what the internet come-ons tell you. Most of us, from Martin Amis down, have to engage in hack work — which I'd define as writing done on demand for a (one hopes) paying client — to make ends meet. And the top rank of the publishing world is occupied by a few Dan Browns and James Pattersons who churn out product for people who like that sort of thing.

Anyway, please don't send me envelopes stuffed with cash trying to get me to review your book. (Or throw me in yonder briar patch.) That's not the way we do things here, and not the way (I thought) most critics approach the work. Generally we read books, then tell you want we think about them.

Which is something we'll get back to in the next column. After I've finished Derek B. Miller's "Norwegian by Night" from 2013.