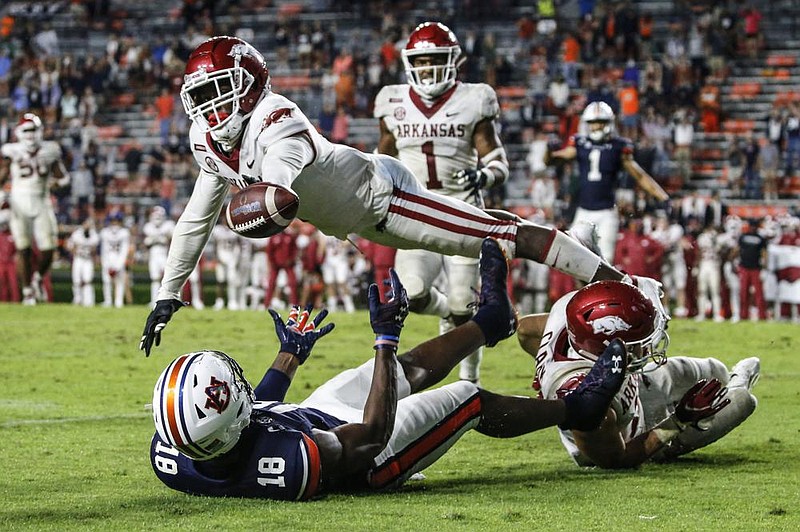 Arkansas defensive back Hudson Clark breaks up a pass intended for Auburn wide receiver Seth Williams (18) during the second half of an NCAA college football game Saturday, Oct. 10, 2020, in Auburn, Ala. (AP Photo/Butch Dill)

AUBURN, Ala. -- The Auburn Tigers, given a gift inadvertent whistle on a botched spike in the closing seconds, sent Anders Carlson out for a second try at a game-winning field goal Saturday.

This time the junior did not miss.

Carlson booted a 39-yard field goal with seven seconds remaining to give No. 13 Auburn a controversial 30-28 victory over the University of Arkansas on a rainy, muddy afternoon before a crowd of 17,490 at Jordan-Hare Stadium.

Arkansas (1-2), which fought back from a 17-0 deficit to take a 28-27 lead in the fourth quarter, nearly pulled off its second road win over a ranked team in as many weeks.

The controversy over Auburn quarterback Bo Nix's muffed snap and spike in the game's final half-minute is certain to live long in the lore of the series between the SEC West rivals.

On a third-down play from the Arkansas 19 with the clock dropping below 30 seconds, Nix fumbled the snap, grabbed the ball from the grass and clearly spiked it behind him. As the officials flagged Nix for intentional grounding and began blowing their whistles, Arkansas safety Joe Foucha pounced on the loose ball.

After a lengthy replay review, referee Jason Autrey announced that it confirmed the call of intentional grounding, and the officials actually ran 10 seconds off the clock for the grounding flag to rub salt in the Hogs' wound.

Carlson, who had missed a 34-yard field goal at the 2:38 mark, stroked through the game-winner to give Auburn (2-1) its fifth consecutive victory in the series.

Said Arkansas safety Jalen Catalon: "We thought he threw it backwards once he received the ball, and Joe Foucha did a good job of getting on top of it. We thought it was a fumble, but sometimes the game doesn't bounce your way, and that's what it was."

Arkansas Athletic Director Hunter Yurachek weighed in on the weird ending, writing on Twitter, "The scoreboard in the end will not reflect it nor will our record, but @RazorbackFB were winners on Pat Dye Field tonight."

Auburn had won in routs the past four games in the series by a combined 193-36, but they were in for a fight against Pittman's first-year Razorbacks.

"These SEC wins, especially this year, are not easy," Auburn Coach Gus Malzahn said. "You look around our league and ... our guys found a way to win, and I think we can take that and help us later in the season.

"Give Arkansas credit. They played with great effort, and I thought they did a super job coaching, too. But we're very happy to have this victory."

A razor's edge kind of finish didn't look to be in the cards during a sloppy first quarter with rain pounding the stadium and neither team building any momentum.

The Tigers did a better job establishing their running game on the slippery grass, outrushing Arkansas 259-119 behind a career-high 146 yards from freshman Tank Bigsby.

Arkansas punted on its first five possessions and struggled to an 0-for-5 start on third downs while falling behind 17-0. But the Razorbacks caught fire in the second quarter and wound up with 437 total yards to Auburn's 446.

Arkansas' special teams were as messy as the playing surface. They drew several illegal formation penalties and gave up a blocked punt by Jordyn Peters in the end zone for a touchdown to open the scoring with 4:32 left in the first quarter.

Auburn built on its lead with Carlson's 47-yard field goal late in the first quarter, then an 80-yard drive capped by Nix's 15-yard keeper early in the second quarter.

Then the Razorbacks joined the fray, getting back in contact before halftime.

Franks drove the Razorbacks 65 yards on eight plays, hitting Woods with a play-action pass for a 5-yard touchdown with 6:24 left in the half. George Caratan muffed the hold, and kicker A.J. Reed could not make the PAT to keep it 17-6.

After the Razorbacks' defense held, Franks found Warren for a 44-yard deep ball, then the pair connected on a 7-yard scoring pass. Trey Knox could not hold on to the two-point conversion pass in the back of the end zone, making the score 17-12.

Auburn -- which had effective two-minute drives in both halves under offensive coordinator Chad Morris, the former Arkansas coach -- drove for a Carlson field goal with 38 seconds left in the half.

The Razorbacks kept chipping away in the second half. Smith caught a 5-yard scoring pass to end an 85-yard sequence to pull the Hogs within 20-18.

After Anthony Schwartz's 17-yard touchdown catch on the first play of the fourth quarter, Arkansas seized momentum with Reed's 23-yard field goal and a defensive stop.

Franks drilled a slant pass to Woods for an 11-yard gain on fourth and 5 from the Auburn 41. On the next snap, Franks stepped up in the pocket and lofted a ball for Warren, who had beaten nickel back Christian Tutt, for a 30-yard touchdown. Reed's extra point gave Arkansas its first lead at 28-27 with 5:29 remaining.

The Tigers quickly drove into scoring range, thanks to Seth Williams' 32-yard catch and run on which he hurdled an Arkansas defender. Nix drove Auburn to the Arkansas' 17 before the drive stalled out on Hudson Clark's pass breakup in the end zone on third down.

The Razorbacks had three running plays, after which Auburn called all of its timeouts, but the series could only reach the 22.

Caratan's punt traveled 37 yards to the Auburn 41, and Tutt returned it to the 50. The Tigers were given an extra 5 yards because Arkansas was flagged for illegal formation on the punt.

From there, Bigsby's hard running got Auburn into field goal range to set up the wacky ending.