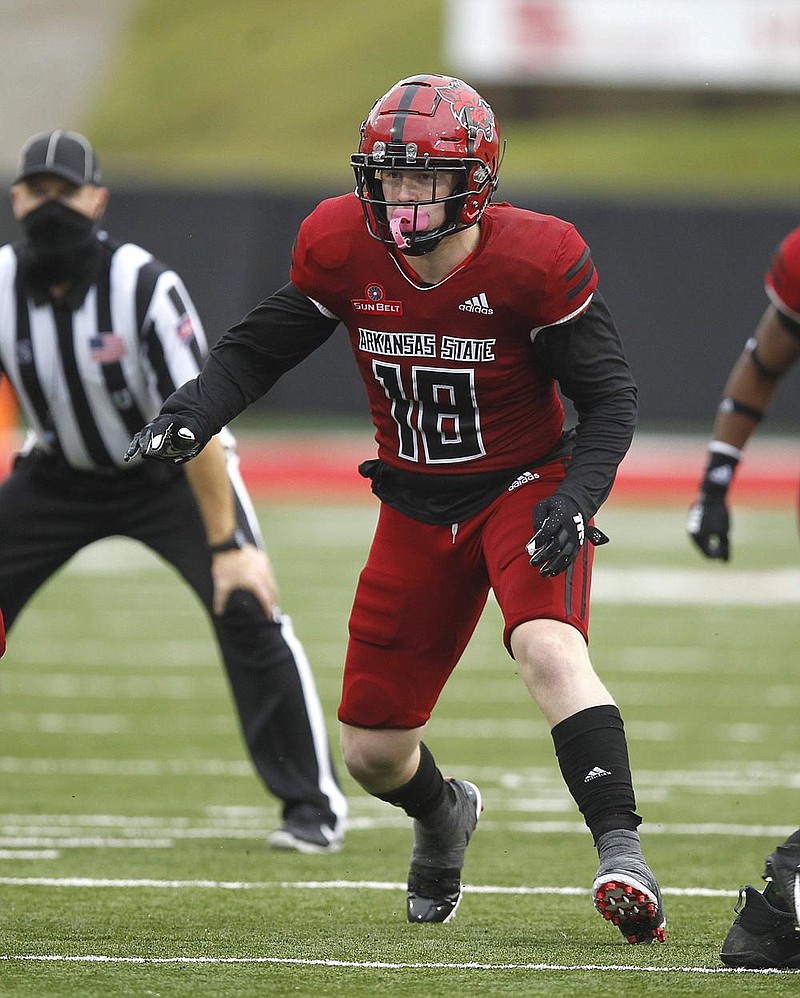 Two months ago, Justin Rice didn't know if he'd have the opportunity to play football this fall. One month ago, he made his Arkansas State University debut.

And Saturday, 52 days into his ASU career, the Fresno State transfer proved his worth, leading the team in tackles (12), tackles for loss (4) and sacks (3) in the Red Wolves' 50-27 victory over the University of Central Arkansas. On Sunday, he was named the Walter Camp National Defensive Player of the Week.

"He's starting to take that role and energize us," ASU Coach Blake Anderson said. "Obviously he had a huge day today. That's what we knew he was capable of -- it was probably unrealistic to think he was going to do that in the first few weeks. I'm excited about where he's headed and I do think he's still got better ball ahead of him."

When Rice announced his decision to transfer from Fresno State to Arkansas State on Aug. 20, the Red Wolves knew they were getting a gem of a linebacker. Before the Mountain West postponed its fall season, he was named the conference's preseason defensive player of the year after totaling 112 tackles, 7 tackles for loss, 3 sacks, 2 interceptions and 2 fumble recoveries in 2019.

Rice immediately started for ASU in its season opener for Memphis, despite only being on the team for two weeks. But he struggled in the first three games, often rotating positions between the three linebacker positions. Anderson said after Saturday's game that Arkansas State put too much on Rice's shoulders to begin with, considering he hadn't gone through spring practice or a summer workout program.

"I think we asked a lot of him early and he was confused and, honestly, wasn't in very good shape," Anderson said. "The Mountain West had not been working collectively, he had been on his own and he lifted a lot, but he just wasn't in the cardio shape he needed to be. And we have played him in a lot of different spots in the course of a month or two of being here. We narrowed it down, we settled him at one spot and just tried to let him learn. You're starting to see him get in better shape and you're starting to see him know what to do."

Rice played only the middle linebacker position against UCA, and he was certainly the most effective he's been all season, creating pressure while also playing solid coverage.

"It's a lot easier staying in one spot than two," Rice said. "You get the same read over and over again and you can really start flying around. And when you're bouncing around -- inside, outside, inside, outside -- you can kind of get bleary reads and that makes it a little bit harder to react quickly to certain plays. Definitely staying in one spot, getting the same key over and over again can really help us play fast."

Through four games, Rice leads the Red Wolves in solo tackles with 22, tackles for loss with 9.5 and sacks with 4. He credits senior linebackers Caleb Bonner and Jeffmario Brown for making him feel more comfortable as the season has progressed as both a playmaker and a leader.

And it's the leadership role Rice has especially taken to heart. After last week's 52-23 loss to Coastal Carolina, in which the defense gave up 539 total yards, Rice became one of the most vocal players in the locker room for Arkansas State.

Saturday he made sure a performance like that didn't repeat itself.

"We took that defeat last week pretty serious," Rice said. "To give up 52 points at any time in the season is really bad and especially to a conference opponent. We took that to heart. We knew that was our felt. The offense should only have to score one point. We got in as a group and tried to figure out what went wrong and it was assignment and details that really killed us. ... We took that very seriously this week."

Rice will certainly continue to be a key contributor on an Arkansas State defense looking to improve and knows he still has much more to offer.

And that's what makes him perhaps ASU's most reliable defensive player -- a mentality to always get better, even on Day 52 as a Red Wolf.