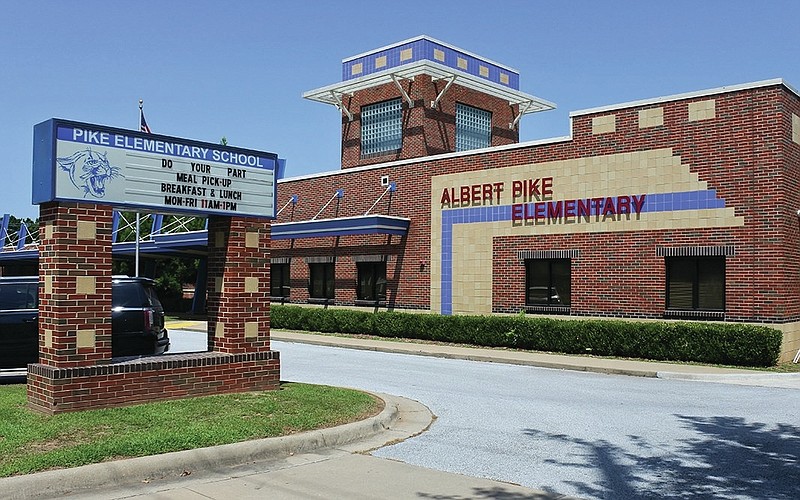 The community will have a say in what to rename Albert Pike Elementary School in Fort Smith. (Arkansas Democrat-Gazette/Thomas Saccente)

FORT SMITH -- During a called meeting on Monday, the Fort Smith School Board moved forward with giving a new name to a school christened after a Confederate general.

The board approved a motion made by board member Susan McFerran to adopt Park Elementary School as the new name for Albert Pike Elementary and to authorize School District Superintendent Doug Brubaker to make preparations necessary to implement the transition to the new name for the beginning of the 2021-22 school year. Six board members voted in favor of the motion and one, Wade Gilkey, voted against it.

Monday's vote came after the school district released a survey on Sept. 29 to provide the board with some initial stakeholder input concerning a new name for the school. The survey asked participants for the new name they were suggesting for Albert Pike Elementary and their rationale for suggesting it. It also asked them, alongside other questions, to fill in boxes to indicate their connection with Albert Pike Elementary, the Fort Smith School District or the Fort Smith/Barling community.

A link to the survey could be found on the school district's website and social media, with it being sent to the families of all Albert Pike students and to staff members of the school as well, according to an abstract included in the packet for the board's Sept. 28 meeting. Paper copies of the survey were also available for members of the community. The survey closed on Thursday.

The survey elicited 876 responses, according to a summary of the results. Of those, 431 came from school district students and staff members. That included 238 Albert Pike students and 42 Albert Pike teachers, with 16 students and 20 teachers suggesting Park Elementary as the new name, making it the most popular suggestion within that group. Park was also the top name from district staff members and students not associated with the school, garnering 30 suggestions. The school is located at 4111 Park Ave.

Based on the volume of input received, as well as board discussions, the Fort Smith School District administration developed two possible pathways to continue the process for the board to consider, a Monday meeting abstract stated. They included the board choosing a new name for the school, or naming a "Pike Renaming Committee" to process the suggested names for the board to review at a later date. The abstract also laid out a recommended plan in the event the board chose the second option.

Gilkey made a motion to rename the school C. Ray Baker Elementary School, citing Baker's "outstanding history as a teacher" and all the lives he has affected in the city. However, the motion did not get a second.

Baker was a Fort Smith mayor and educator who taught U.S. history at Southside High School for 42 years before retiring in 2007, according to a previous Arkansas Democrat-Gazette article. He died in 2011 at the age of 71.

"I absolutely agree with Wade as far as [Baker being] a respectable man, and he was outstanding for this community," McFerran said. "I totally agree with that and love his family, but once we open this process with a person's name, it's going to set a precedent for our future, so my motion would be to name the school Park Elementary."

"It is generic," Blackwell said. "From what I understand, Mr. Baker was a wonderful man for our community, for education. He was certainly a champion for children in our community. But just looking forward, a name that will stand in 50 years, 70 years, 100 years, I think that we need to consider the generic name."

The board on Aug. 24 unanimously approved a resolution expressing its intent to adopt a new name for Albert Pike Elementary for the 2021-22 school year. The resolution directed the school district administration to organize a committee to develop and recommend a renaming process involving stakeholders from the school community.

The resolution stated that Pike, a Confederate general, joined a petition in 1858 to "expel all free blacks from the State of Arkansas." He also wrote in 1868 that "We mean that the white race, and that race alone, shall govern this country. It is the only one that is fit to govern, and it is the only one that shall."

Members of the Fort Smith district's equity and minority recruitment committees discussed the name of Albert Pike Elementary School during a joint meeting July 31, an abstract included in the board's Aug. 10 meeting packet stated. Their consensus was to recommend to the board that the school be renamed.