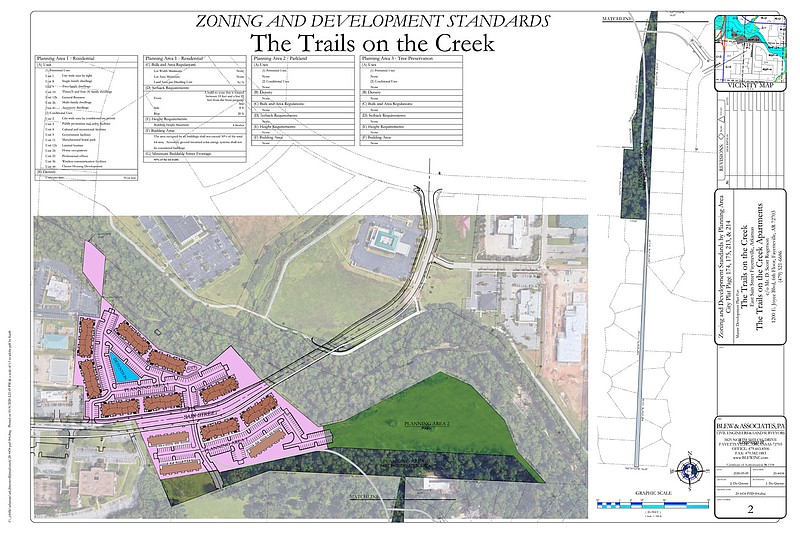 A drawing shows the proposed layout for Trails on the Creek, an apartment project on the north side of Fayetteville between Sain Street and Vantage Drive. (Courtesy/City of Fayetteville)

FAYETTEVILLE -- Planning commissioners on Monday supported the development side of a proposed project near Mud Creek but not the part dealing with tree preservation and a potential park.

The commission met online via Zoom and considered a planned zoning district associated with Trails on the Creek, a 321-unit proposed apartment complex from Lindsey Management on about 20 acres. The site is south of Mud Creek Trail, between where Sain Street is planned to connect to Vantage Drive on the north side of town.

A planned zoning district is a detailed rezoning that includes building layouts, green space designation, streets and other features. The commission saw a plan that had the apartment buildings on the west side of the property, and open park and tree preservation space on the east side.

The commission first reviewed the plan Sept. 28 and asked for a number of revisions. Rezoning requests for the project in general went before the commission and City Council last year and drew opposition from neighbors southeast of the site.

The council at the time asked the developers to work with neighbors and city staff and come back with a plan everyone could support. That plan was the one before the Planning Commission.

The developers made revisions to the apartment side after the Sept. 28 Planning Commission meeting, and commissioners voiced support for the realignment of streets and access drives.

Brenda Wallner, a Buckingham Drive resident, said neighbors, city staff and the developers worked hard on a plan, and the development had the support of the neighborhood.

"We feel like it meets all of the criteria that we were told should be met, and that we all agreed upon," she said.

Park Planning Superintendent Ted Jack said having the larger area for a park would tie in nicely with the natural corridor that is Mud Creek. It would expand what is essentially a strip of green space along a creek and trail, he said. Jack told commissioners a conservation-themed neighborhood park would be appropriate for the area.

Commissioners had concerns with how the park and tree area had no buildings around its edge, creating potential safety issues. Commissioner Matt Hoffman referred to the principle of crime prevention through environmental design, which encourages residences to face a common area to discourage dangerous activity.

"If we want to do a park here, as I've said in the past, we need to figure out how to get private frontage on it, where we can get front doors and windows actually facing the park instead of just floodplain and privacy fences," he said.

Brown said he supported the project, but not the way the commission divided the issue.

"I disagree with the Planning Commission saying they are more knowledgeable about parks and our parks system than the parks department," he said.

The City Council will have final say on the proposal.

• Rezoning a lot east of Gregg Avenue and north of Prairie Street from commercial and industrial to a residential zone.