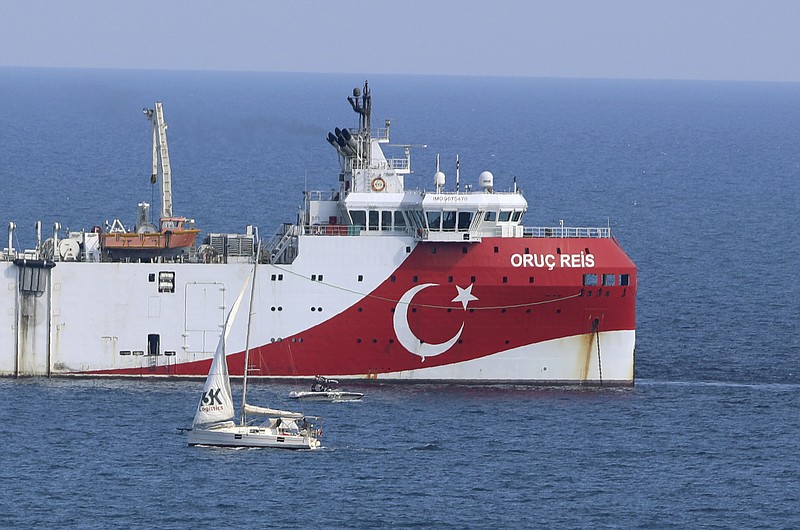 The move reignited tension over sea boundaries between Greek islands, Cyprus and Turkey's southern coast that flared up over the summer, prompting a military buildup, bellicose rhetoric and fears of a confrontation between the two NATO members and historical regional rivals.

The Turkish search vessel, Oruc Reis, left the port of Antalya on Monday for a mission through Oct. 22.

Turkish Defense Minister Hulusi Akar said the vessel was continuing with its "planned and scheduled activities," adding that the Turkish navy would provide "support and protection" if necessary.

Greek Prime Minister Kyriakos Mitsotakis discussed the development on the phone with European Council President Charles Michel, saying he would bring it up at the next council meeting Thursday and Friday.

"This new unilateral act is a severe escalation on Turkey's part," a government statement quoted Mitsotakis as saying.

Turkey said Greek objections were "unacceptable," insisting that the research vessel was operating within Turkey's continental shelf -- in an area just about 10 miles from the Turkish coast and about 265 miles from mainland Greece.

Turkey had announced last month that it was pulling the Oruc Reis to shore for maintenance and resupply, saying the move would give "diplomacy a chance."

"Our expectation from Greece is for it to withdraw its maximalist claims that are contrary to international law ... put an end to its exercises and military activities that increase tensions in the Aegean and the Mediterranean and to enter into a sincere dialogue with us," the Turkish Foreign Ministry said.

An aide to Turkish President Recep Tayyip Erdogan, Fahrettin Altun, tweeted that while Ankara favored dialogue, "there can be no negotiations if you say 'what's mine is mine and what's yours is negotiable.'"

Turkey faces the threat of sanctions from the European Union, to which both Greece and Cyprus -- an island republic off which Turkey has sent drilling ships -- belong.

German Foreign Minister Heiko Maas, whose country holds the rotating EU presidency and has been mediating between Ankara and Athens, will fly to Cyprus and Greece for talks today.

On Monday, the German government said it had "taken note" of Turkey's announcement on the energy prospecting.

"If there really were exploration in this disputed area of sea, that would be a very regrettable step and, from our point of view, an unwise one," German Chancellor Angela Merkel's spokesman, Steffen Seibert, told reporters in Berlin. "It would set back efforts to reduce tensions ... and it most certainly would be anything but conducive to the continued development of EU-Turkish relations."

Seibert reiterated Germany's insistence that "it is important and necessary for all involved to make an effort to prevent escalations and to resolve their differences ... -- including the differences on maritime law -- as quickly as possible, in dialogue and on the basis of international law."

​​​​​Information for this article was contributed by Derek Gatopoulos, Geir Moulson and Sylvie Corbet of The Associated Press.