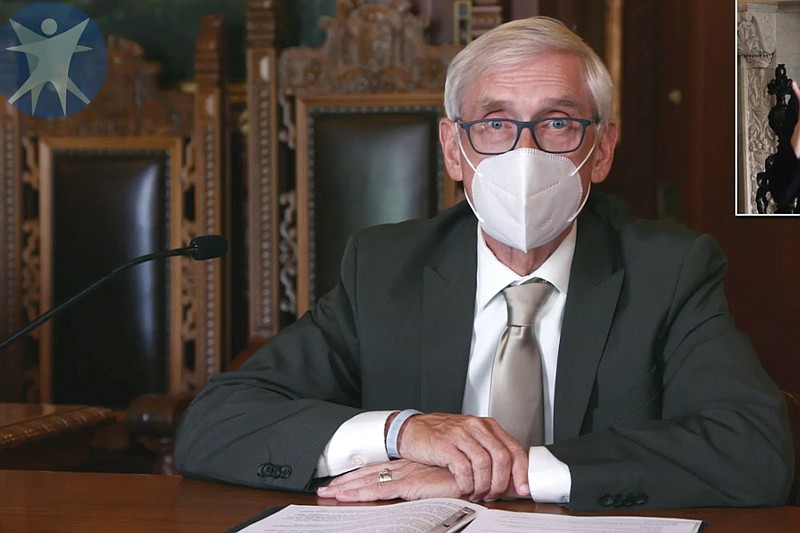 MADISON, Wis. -- A Wisconsin judge Monday allowed the state's mask mandate to stand, rejecting an attempt by the Republican-controlled Legislature and a conservative law firm to overturn it even as coronavirus cases spiked and the number of people hospitalized with covid-19 hit a new high.

Republican legislators in other states have skirmished repeatedly with Democratic governors over their powers during the pandemic.

In Wisconsin, the judge noted in his ruling that lawmakers could vote to overturn Democratic Gov. Tony Evers' order but that they haven't so far. Evers sent Republican legislative leaders a letter hours after the ruling, asking them to drop the lawsuit and "work together on our state's greatest challenges."

Noting a spike in cases and the opening of a field hospital to provide additional capacity for coronavirus patients, Evers urged Republicans to "start taking this seriously."

Wisconsin is among the nation's worst covid-19 hot spots.

Republican legislative leaders did not immediately return messages seeking comment. The Legislature filed a brief in support of the lawsuit.

The Wisconsin Institute for Law and Liberty, which filed suit against the mask mandate, will appeal Monday's ruling, said the group's president, Rick Esenberg. He did not say if it would attempt to skip the state appeals court by asking the conservative-controlled Wisconsin Supreme Court to take the case. Esenberg called the issue a "critical constitutional matter."

The lawsuit argues that Evers overstepped his authority by issuing multiple emergency orders to curb the pandemic. It also said masks are shown to be ineffective, as Wisconsin's infection numbers have continued to rise since Evers' mandate was imposed. Evers defended the mask order, saying it was within his power to impose the requirement and that he followed the recommendations of public health experts.

St. Croix County Circuit Judge R. Michael Waterman said in his ruling that nothing prevents a governor from issuing multiple emergency declarations "when the emergency conditions continue to exist."

Evers called the ruling a victory in the fight against covid-19.

"We will continue doing everything we can to prevent the spread of this virus," he said. "We ask Wisconsinites to please stay home as much as possible, limit travel and going to public gatherings, and wear a mask whenever out and about."

The judge also noted that overturning the mask mandate would "affect every person in Wisconsin by a judicial act that usurps the governor's power to declare a state of emergency and the Legislature's power to end one."

The head of the World Health Organization on Monday warned against the idea that herd immunity might be a realistic strategy to stop the pandemic, dismissing such proposals as "simply unethical."

At a media briefing, WHO Director-General Tedros Adhanom Ghebreyesus said health officials typically aim to achieve herd immunity by vaccination. He noted that to obtain immunity from a highly infectious disease such as measles, for example, about 95% of the population must be immunized.

"Herd immunity is achieved by protecting people from a virus, not by exposing them to it," he said. Some researchers have argued that allowing covid-19 to spread in populations that are not obviously vulnerable would help build up herd immunity and is a more realistic way to stop the pandemic, instead of the restrictive lockdowns that have proved economically devastating.

"Never in the history of public health has herd immunity been used as a strategy for responding to an outbreak," Tedros said.

He said too little is known about immunity to covid-19 to know if herd immunity is even achievable.

"We have some clues, but we don't have the complete picture," he said, noting that the WHO had documented instances of people becoming reinfected with the coronavirus after recovering from an initial bout. Tedros said that while most people appear to develop some kind of immune response, it's unclear how long that lasts or how robust that protection is -- and that different people have varying responses.

"Allowing a dangerous virus that we don't fully understand to run free is simply unethical," he said.

The WHO estimates that less than 10% of the global population has any immunity to the coronavirus, meaning the vast majority of people remain susceptible.

Carnival Cruise Line said Monday that it was canceling its remaining cruises scheduled for November out of two Florida ports, as well as five cruises from Australia at the beginning of next year.

The company had previously announced it was canceling for the rest of the year all U.S. cruises except for trips out of Port Canaveral and Port Miami after an extension of a no-sail order until Oct. 31 by the U.S. Centers for Disease Control and Prevention. But Monday's announcement nixed trips in November on the six ships operating out of the two Florida ports.

Cruises are still planned for December out of those two ports.

"Carnival continues to work on protocols and procedures that would allow for the resumption of cruise operations, with a gradual, phased-in approach, designating Miami and Port Canaveral as the first two homeports for embarkations," the cruise line said.

The company said it was notifying guests that five cruises on Carnival Splendor out of Sydney in January and February have been canceled.

Chinese health authorities will test all 9 million people in the eastern city of Qingdao for the coronavirus this week after nine cases linked to a hospital were found, the government announced Monday.

The announcement broke a two-month streak with no virus transmissions reported within China, where the pandemic emerged in December, though the country has a practice of not reporting asymptomatic cases. The ruling Communist Party has lifted most curbs on travel and business but still monitors travelers and visitors to public buildings for signs of infection.

Authorities were investigating the source of the infections in eight patients at Qingdao's Municipal Chest Hospital and one family member, the National Health Commission said.

"The whole city will be tested within five days," it said on its social media account.

Qingdao is a busy port with the headquarters of companies including Haier, a major appliance maker, and the Tsingtao brewery. The government gave no indication whether the latest cases had contacts with travel or trade.

The last reported virus transmissions within China were four patients found Aug. 15 in the northwestern city of Urumqi in the Xinjiang region. All the cases reported since then were in travelers from outside the mainland.

England has seen new coronavirus cases quadruple in the past three weeks and now has more covid-19 patients hospitalized than before the government imposed a lockdown in March, health authorities said Monday, laying the groundwork for a fresh package of restrictions.

But, like much of Europe, Britain is now pursuing targeted local restrictions -- such as closing pubs in Liverpool -- while doing everything it can to avoid another national lockdown.

In a statement to Parliament, British Prime Minister Boris Johnson said he was trying to take a balanced approach between the extremes of "shuttering our lives and our economy" and abandoning the fight.

"We don't want to go back to another national lockdown," he said, but "we can't let the virus rip."

Johnson announced a three-tier alert system, under which areas of highest concern will see pubs and bars close and almost all mixing of households banned. In areas that fall in the middle tier, people won't be allowed to meet indoors with those who are not part of their households. And the lowest tier will have to abide by measures already in place, with pubs closing at 10 p.m. and gatherings limited to six people.

France's prime minister on Monday refused to rule out further local lockdowns after health authorities reported about 43,000 new coronavirus infections over the weekend.

Nine big cities, including Paris, Marseille and Lyon, have now been placed on maximum virus alert as officials warn that France, one of Europe's hardest-hit countries, is experiencing a second wave of the epidemic. The path of the virus is accelerating rapidly across the country, and the situation in French hospitals is deteriorating by the day.

"Nothing should be ruled out when we see the situation in our hospitals. ... There can be no more slackening," Prime Minister Jean Castex said on broadcaster France Info.

"A national lockdown must be avoided by all means," Castex warned, calling on people to help by limiting private gatherings in their homes.

The government will review the health data Wednesday to see whether further action is needed after tighter restrictions in several metropolitan areas. French President Emmanuel Macron will speak to the nation after that.

• In Spain, Socialist Prime Minister Pedro Sanchez has invoked emergency powers to prevent travel in and out of Madrid, overruling the Conservative local government, which had favored neighborhood-level lockdowns. Opposition to the move was evident during Spain's National Day celebrations Monday. People gathered outside an event at the Royal Palace to boo Sanchez's government, and the far-right Vox party led a car caravan to protest "the criminal and totalitarian government."

• In Belgium, the diagnosed cases last week were 89% higher than the previous week. A spokesman for the national coronavirus response, Yves Van Laethem, warned Monday that if current trends aren't halted, the number of people in intensive care units at the end of October could rival the heights seen in March and April. "All indicators continue to increase alarmingly," he said.

• Germany on Monday added Munich to a growing list of coronavirus "red" zones, triggering new restrictions. Bars and restaurants will be required to stop serving alcohol after 10 p.m. Masks will be mandatory for pedestrians, and no more than two households, or up to five people, are allowed to meet in groups. Private indoor events are capped at 25 attendees, and outdoor events at 50.

• In Italy, the number of daily cases has not reached the number seen in some other Western European countries, but the trajectory is nonetheless seen as worrying. And unlike in the spring, when the outbreak struck mainly the country's richer north, it is now reaching into southern regions with frailer economies and hospital systems. Italy last week issued a nationwide mandate that masks be worn outdoors as well as indoors, and so far most people seem to be adhering to the measures. On Monday, Prime Minister Giuseppe Conte ruled out another nationwide lockdown but said localized lockdowns could be used if necessary.

​​​​​Information for this article was contributed by Scott Bauer, Todd Richmond and staff members of The Associated Press; and by Karla Adam, Chico Harlan, Michael Birnbaum, James McAuley and Luisa Beck of The Washington Post.