SEC fesses up: Errors made, but replay right, supervisor says 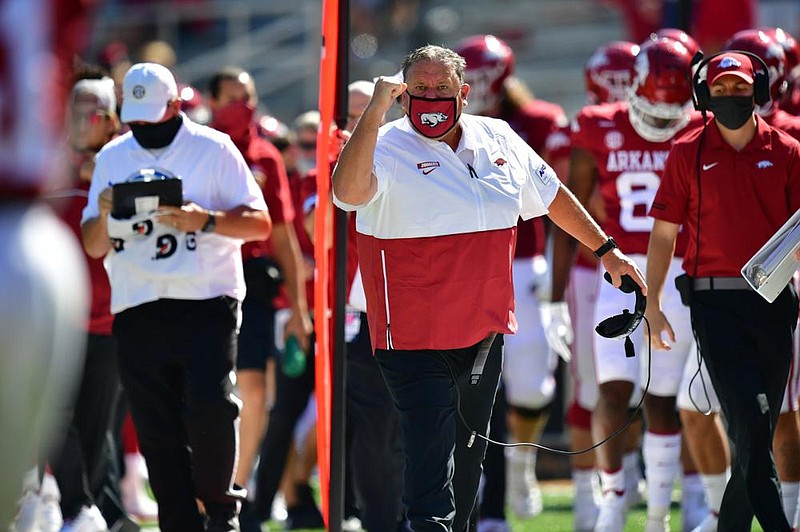 First-year Arkansas Coach Sam Pittman said he and his staff have not discussed the Razorbacks’ struggles in recent years with the players. “Never mentioned it,” he said. (University of Arkansas/Walt Beazley)

FAYETTEVILLE -- SEC supervisor of officials John McDaid acknowledged Monday there was an incorrect ruling on Auburn quarterback Bo Nix's late attempt at spiking the ball in the final half-minute against Arkansas on Saturday, but he said the collaborative replay process followed correct protocols in reviewing and ruling on the critical play.

In an exclusive interview with the Arkansas Democrat-Gazette, McDaid said he suspected referee Jason Autrey locked in on Nix's mishandling of the snap, which caused him to throw his flag for intentional grounding, signal incomplete and blow his whistle in the immediate aftermath of the play.

Nix mishandled the snap on a third-and-1 play from the Arkansas 19, and the ball fell to the wet grass. Nix picked the ball up, pivoted right and "clocked" the ball backward with 30 seconds left in the game and Arkansas clinging to a 28-27 lead.

Arkansas safety Joe Foucha made an initial dive for the ball at the Auburn 26, bumped it further into the backfield, then scrambled and recovered it ahead of Auburn receiver Shedrick Jackson after the ball hit the foot of center judge Mike Block, who was blowing his whistle and signaling an incomplete pass.

After a lengthy video review, Autrey's call was upheld, Auburn retained possession of the ball, and 10 seconds were run off the clock for the intentional grounding penalty. Anders Carlson came in and made a game-winning 39-yard field goal with seven seconds left.

Arkansas Athletic Director Hunter Yurachek and Coach Sam Pittman both had conversations with McDaid -- very shortly after the game in Yurachek's case.

The SEC -- in an effort for transparency the conference also showed after the controversial ending of Texas A&M's 74-72 win over LSU in seven overtimes on Nov. 24, 2018 -- elected to provide further explanation of the call and review to the Democrat-Gazette.

"My strong suspicion of what happened is that when the snap was mishandled and hit the ground, and then the quarterback subsequently picked it up, the referee cued into, 'This is one of the two scenarios where you're no longer allowed to legally ground the ball for the purposes of conserving time,' and sure enough the quarterback goes and spikes the ball into the ground," McDaid said. "My strong suspicion is the referee locked into that component of the play and unfortunately failed to recognize that the ball was thrown backwards, that it was a backwards pass.

"We made the wrong judgment on the field and ruled it as an incomplete forward pass with a flag for intentionally grounding the ball after it had touched the ground. So that's what happened on the field."

The replay review -- which McDaid said involved on-site replay official Ken Switzer and the collaborative official in the SEC video center in Birmingham, Ala. -- is a different and more complicated story.

For a call to be overturned such as the illegal Nix spike, McDaid said, two components had to be satisfied. The review had to show the ball clearly was thrown backward, and it had to show the recovery was made in the "immediate continuous loose-ball action," and that's where this play got tricky.

"The first component is that the video conclusively needs to show the pass was backwards and not forwards, and Saturday's play did conclusively show that," McDaid said. "Do we have the second component? What the replay team saw ... is that the ball becomes loose after it's spiked into the ground for the backwards pass, and we have a member of the defense, No. 7 [Foucha] go and try to make a play to possess that ball.

"He fails to possess it and muffs it further into the offensive backfield. The ball ends up hitting the foot of our center judge, and with the ball still in close proximity to the center judge -- who at that moment is signaling incomplete and also blowing his whistle -- we have at least one member of each team in the proximity as well. No. 7 is now making a second dive to collect the loose ball, and we also have No. 11 [Jackson] of the offensive team in that proximity.

"Video shows that the players, particularly the offensive player No. 11, is reacting to the signals and the whistle of the center judge. And at that point in time, the judgment, and it is a judgement -- there's no hard standards, benchmarks or guidelines of when immediate continuous loose-ball action ends.

"It's a judgment call. The replay team, upon seeing players reacting to the signals and the whistle of the center judge, concluded that the immediate loose-ball action had ended without any player securing possession."

The ruling is a tough pill to swallow for Arkansas fans, who felt their two-touchdown underdog team had earned an upset victory.

"If you put an incorrect ruling at the wrong place in a game -- i.e. the last 30 seconds of the game -- the game does pivot on that call, and it's unfortunate, and I don't know that I can say anything more than that," McDaid said.

McDaid also was asked whether the whistle should have been blown on the play.

"The referee incorrectly blows it dead as an incomplete forward pass because the judgment of forward is incorrect," McDaid said. "But the remaining officials, including the center judge ... he's simply echoing the signal of a fellow crew mate, and that is a correct mechanic."

McDaid said he needed to keep his conversations with Yurachek and Pittman, who added Monday he was "at peace with it," private.

"I have had conversations with both of them," he said. "This office, my office, the officiating department, is well aware of the disappointment of the Arkansas football community with what transpired at the end of the game on Saturday.

"In both conversations, I talked to them about how the ruling on the field was incorrect, the ruling in the replay booth I'm very comfortable with, and we followed the protocols as outlined by the NCAA's replay rules."

McDaid said he had no comment on whether Autrey or the crew faced disciplinary action, but added: "We're always evaluating the in-season performance and at times will alter assignments based on those performances. We keep private any actions we take related to that."

There was one other issue McDaid pointed out: the 10-second runoff for intentional grounding. The enforcement of that rule cost Arkansas at least one extra play.

"It is true that Arkansas had the option to decline the 10-second runoff," McDaid said. "That was not administered correctly by the officiating crew.

"There was a misunderstanding amongst the crew. I'll just state it as that. But Coach Pittman's desire to forgo the 10-second runoff was not enacted. That's obvious. We had a 10-second runoff and the clock started on the referee's signal."

And the Razorbacks have to live with the mistakes.