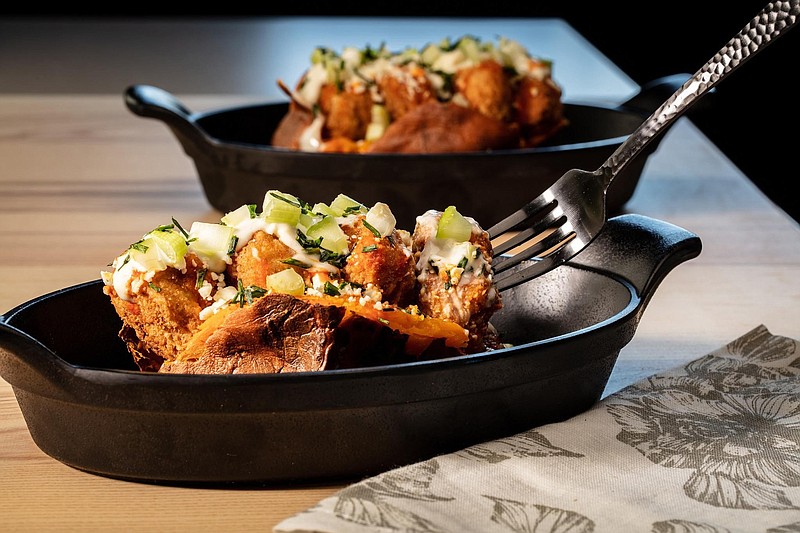 Friends tell me they feel intimidated cooking for me. I let them in on my secrets to ease their minds: My favorite dinner involves popcorn. Or a baked potato.

I keep these weekly meals from boredom by swirling in some variety or inspirations from dining out. Cheese and black pepper on the popcorn, for example, might remind me of cacio e pepe at our favorite Italian spot.

Loaded baked potatoes starred as dinner many nights when the kids had sporting events and tons of homework. Now I crave them for comfort and indulgence. I like to swap sweet potatoes for russets, and plain yogurt for sour cream in a nod toward better eating.

To offset the mundane, this fall I'm loving a version that tops crusty baked sweet potatoes with a whimsical take on Buffalo-style chicken wings. Think chicken nuggets, blue cheese and hot sauce billowing out of the potato's center. Feel free to swap frozen eggplant cutlets, or vegetable fries, diced after heating, for the chicken for a meatless main.

Have all the ingredients near the stove. Turn on the exhaust fan. Pour oil into a deep 3-quart saucepan with a lid. Add 2 popcorn kernels and set it over medium-high heat. Cover the pan.

Stand near the stove and listen for the kernels to pop. When they do, that means your oil is hot enough. Carefully pour the remaining popcorn kernels into the pan. Cover and shake gently. Cook over medium-high heat while the kernels pop vigorously, a minute or two. Reduce heat to very low, shake the pan and let cook until you hear the kernels stop popping. Turn off the heat and let stand covered while you get out a large bowl.

Pour the popcorn into the bowl. Immediately sprinkle with the salt, pepper (if using), yeast and powdered cheese to taste while mixing gently with a large spoon. Enjoy while hot.

Heat oven to 425 degrees. While the oven heats, pierce potatoes in several spots with the tip of a knife. Microwave potatoes on 100% power, turning them over occasionally, until they are easily pierced with a knife, 10 to 12 minutes.

Put chicken nuggets in a single layer in a lightly oiled cast-iron skillet or baking pan. Place potatoes alongside nuggets. Bake, turning potatoes and nuggets once, until outsides are crisped, 12 to 13 minutes.

Put each potato on a serving plate. Cut an X in the center of the potato and then squeeze potato to open it out at the X. Fill each potato with half of the hot chicken, spoonfuls of the hot sauce and blue cheese. Top with a dollop of the dressing, diced celery and chives. Serve.