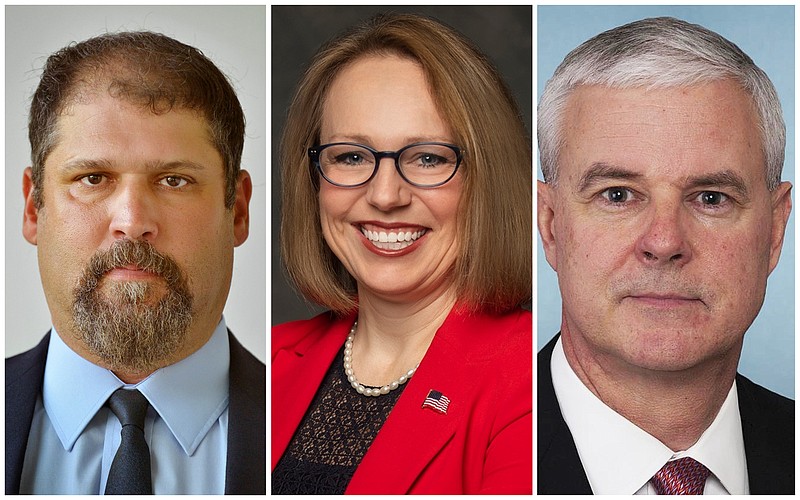 CONWAY -- Candidates at Tuesday's 3rd Congressional District debate agreed that the nation's covid-19 response has been flawed, but disagreed about whom, if anyone, bears the blame for a pandemic that has claimed more than 215,000 lives in the United States.

Republican U.S. Rep. Steve Womack of Rogers provided the perspective of a five-term congressman who witnessed the federal response firsthand.

During the debate and at a subsequent news conference afterward, Libertarian Michael Kalagias, a retired teacher from Rogers, gave his perspective as a veteran, trying to obtain health care from the Veterans Affairs system in the midst of a public-health emergency.

None of them claimed things have gone smoothly.

"This pandemic hit our shores, and did not come with a playbook," Womack told the Arkansas PBS debate panelists.

[Video not showing up above? Click here to view » https://www.youtube.com/watch?v=QMTx7riTZTo]

"In many respects, our country was caught somewhat unprepared in terms of the personal protective equipment that I'm sure my nurse opponent down here will speak to here briefly. But also, in terms of preparing ourselves for the potential economic calamity that would ensue this particular pandemic," Womack said. "There are very difficult decisions that have to be made, many times on the fly, as you're trying to deal with something as unknown as covid-19."

Williams, on the other hand, accused President Donald Trump's administration of failing to keep watch.

"I would like to say that there was a playbook actually left by the Obama administration and the Trump administration disbanded our pandemic preparedness team," she said. "In hindsight, that was a really bad decision.

"We have a tremendous amount of intellectual resources that are housed in the [U.S. Centers for Disease Control and Prevention] and the [National Institutes of Health] that have been undercut by the Trump administration," she said. "We needed leadership to bring us all together to defeat this common enemy and we haven't gotten that. We are dying [because of] a lack of leadership in this country right now."

Womack and Williams acknowledged that covid-19 had disproportionately affected minority communities; the Marshallese and Hispanic residents, in particular.

Kalagias said those at the bottom of the economic ladder have been hit especially hard.

"The least privileged among us always bear the brunt of bad policy. It's been that way throughout history and it's happened here again," he said.

There is plenty of blame to spread around, he said.

"The pandemic caught us flat-footed, not because we had one bad president or two, but because we have had decades and decades of bad policy that goes back to not just presidents, but our Congress [that] has to pass all these laws," he said.

Kalagias faulted other bodies as well, including the CDC for botching the initial testing kits and the U.S. Food and Drug Administration for taking too long to grant its approval.

Given a chance to respond, Womack argued that the administration had done its best under difficult circumstances.

"It's very easy to armchair-quarterback the pandemic and be able to throw a lot of criticism toward the president's way. Look, the president was handed a bad situation to begin with," he said.

"Nobody on the other side has offered up anything other than more testing, more contact tracing, those kinds of things, which seems to be out of the decisions made by the Coronavirus Task Force, led by Vice President Mike Pence," he said.

Throughout the debate, the candidates tried to differentiate themselves from their opponents.

"I've been in Congress now for the better part of 10 years. I have a front-row seat to many of the issues, all of the issues, that face our country. But I also have a unique perspective on the issues that are specific to the 3rd District of Arkansas," he said.

Before ticking off a list of issues on his radar -- sewer rates in Fort Smith, navigation along the Arkansas River and a potential pilot training center at Ebbing Air National Guard Base -- he said, "I would argue [that] ... of the contestants here today, that I have the most intimate and unique knowledge of the issues affecting my constituents."

Despite a decade in Congress, Womack has done little to better the lives of the people of Northwest Arkansas, Williams said.

"People are frustrated by their elected officials, who spend their time telling us who to fear, fighting one another and sowing national discord rather than solving the problems of everyday Americans," she said.

If elected, Williams said she would protect Medicare and Social Security and fight to improve access to affordable health care.

"One of the big reasons I got involved is because I wanted to make sure that nobody would go broke, just because they get sick," she said. "We need an advocate in Washington who will govern in a fair manner and fight for all of us in the 3rd Congressional District."

All three candidates expressed concern about the $27 trillion national debt.

Womack, a former House budget committee chairman, said he had crafted a budget plan in 2018 that would have eventually brought balance.

"We did it in a nine-year window and not with gimmicks," he said. "I knew that when we presented our budget, that we had to put forth a document that could actually put America on a more sustainable fiscal glide scope and we did," Womack said.

Ultimately, the bill wasn't brought up on the House floor for a vote.

Kalagias said Womack is right that America has a spending problem.

"The problem is that he's also voted for all those spending bills and he's voted to lift the debt cap every time it's come up for a vote," Kalagias said.

When it comes to reining in deficit and debt, Womack hasn't gotten the job done, Kalagias said.

"He's been terrible at it," the Libertarian added.

Kalagias also decried the quality of health care that is available through the VA system.

Promises to improve the system have fallen short, he argued.

"There's been lip service but nothing better," he said.

Because of covid-19 restrictions, fewer non-emergency services have been available, he said at a post-debate news conference.