Wolves' Green a stalwart in Year 6 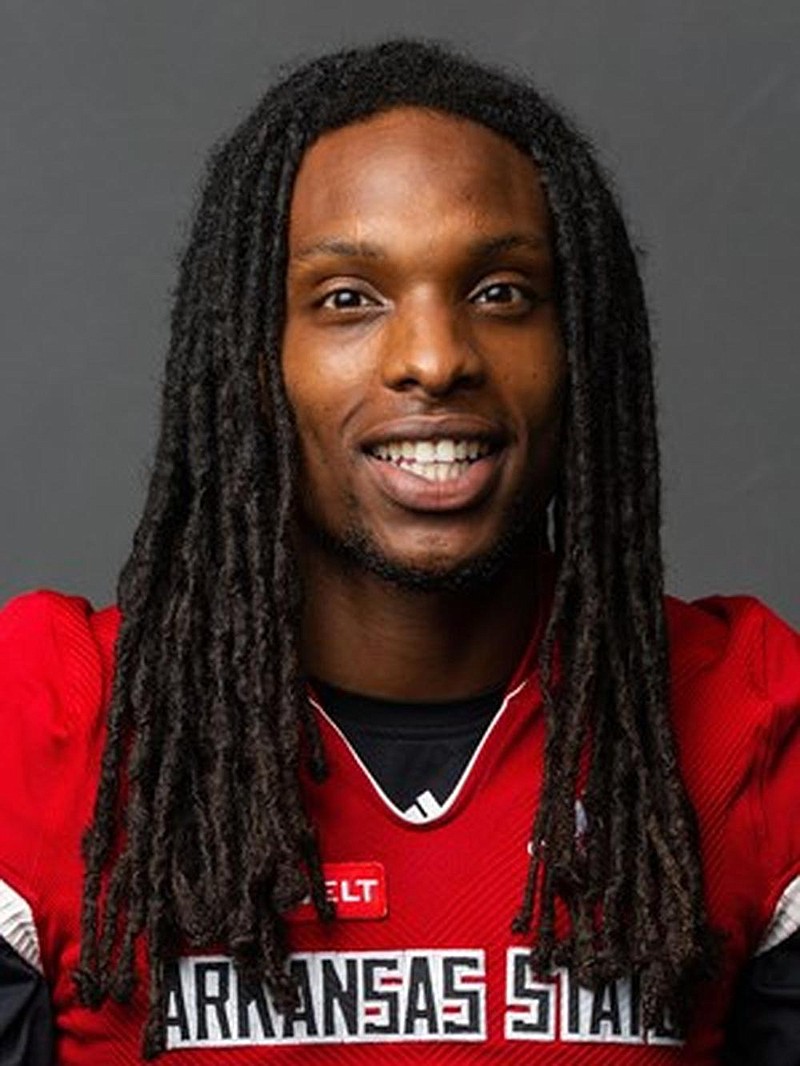 Sitting at the lake over the Fourth of July weekend, Kyle Cefalo called Dahu Green.

Green, entering his senior season at Arkansas State University, was seeking guidance from his position coach. After battling several injuries, including a broken ankle and torn PCL, Green was questioning whether he'd ever be healthy enough to play wide receiver at the level he envisioned.

"We're not going to give up on you," Cefalo told Green. "We've got to do whatever it takes to get you out there because the alternative is you graduate and your career's over, and you're not playing football anymore. And we'll support you if that's your decision, but at the end of the day, I still believe you have a lot of football left to play and still believe you're a phenomenal player."

"It was unreal. It was like, wait, did I score? What just happened?" Green said. "I got to the sideline and I see Coach Cefalo, Coach [Brandon] Joiner, and they both gave me a big hug. It was pretty dope."

On Saturday against the University of Central Arkansas, Green showed his full potential, catching a career-high 6 passes for 94 yards and 2 touchdowns. He adds to an already impressive group of ASU receivers, which is led by senior Jonathan Adams Jr.

With Green and Adams -- who stand at 6-5 and 6-3, respectively -- flanking ASU's Spread offense, the Red Wolves have become one of the most potent air attacks in the country, averaging 342.5 passing yards per game to rank No. 8 in the country.

Green's football journey hasn't been easy. Transferring from Oklahoma and battling several injuries, he hasn't played near the amount of football he expected coming out of high school.

"Dahu's a tough son of a gun," said Adam Gaylor, his high school coach. "He is a tough-minded kid. Doesn't mind hard work. Doesn't mind dominating adversity. He's never one to shy away from a challenge. He attacks it."

It's that mindset that has allowed Green to fight through adversity, which he credits for molding him into the player and man he is today.

"The sky is the absolute limit for Dahu Green," said Cefalo, ASU's receivers coach. "There were plenty of times where I didn't know if we were going to make it, but we did and I couldn't be more proud of him."

Lincoln Riley stood on Westmoore High School's track, watching as Green warmed up for the 200 meters and high jump.

It was a January, and Riley had recently been named Oklahoma's new offensive coordinator. He heard there was a 6-5, 200-pound wide receiver 15 minutes from OU's campus that the Sooners hadn't offered.

He stood next to then-Westmoore track and field coach Patrick McKay in awe, watching Green run a 22-second 200 and record a 6-7 high jump.

"Are you guys going to offer him?" McKay asked.

"Hell yeah we're going to offer him," Riley responded. "Look at him run."

Riley offered Green that day, and several weeks later he signed with Oklahoma as a 3-star wide receiver ranked as the sixth best prospect in the state, according to 247Sports.

Green hadn't played football long. Growing up in Southern California with seven older sisters, football wasn't something he started playing until he was 14. And he really didn't start caring about it until after his junior season at Westmoore, about a year after he and his family moved to Oklahoma City.

"I liked the game, I liked the sport," Green said, "but I never thought about going to college."

In the spring of his junior year, after catching 38 passes for 700 yards and 10 touchdowns, he started receiving offers from schools such as Louisville, Washington State, Kentucky and, of course, Arkansas State.

A year later, Green had become one of the fastest rising recruits in college football before finally settling on Oklahoma after Riley's visit. Green finished his senior year with 58 receptions, 961 yards and 14 touchdowns.

"We had all these coaches showing up to our practices and games to watch him," said Bryson Lee, Green's quarterback at Westmoore. "He went from a local star to one of the top recruits in the country. He was a monster."

After redshirting his freshman season at Oklahoma, he caught only three passes for 89 yards in his second season at OU. Needing a change of scenery and wanting a new beginning, Green decided to transfer.

It was a difficult decision, he said. He liked Oklahoma and was close with Riley and many of his teammates, but he needed to get away. He needed something different.

"Coach Riley was a guy I trusted, and I still trust. He's a good guy, and we had a pretty close relationship," Green said. "He talked to Coach [Blake] Anderson, and it was real simple.

"I didn't want to do all the announcing on Twitter and trying to get offers and all that. I did some research on my own. I got to talk to Coach Anderson and got to really know him. It just felt smooth."

Riley and Anderson are close friends, and when Anderson saw Green was leaving, he immediately called Riley.

"[Riley] said it would be a great place for him to be," Anderson said. "They didn't really want him to leave, but they felt like it was in his best interest to leave. They thought he needed a fresh start."

He sat out the 2017 season due to NCAA transfer rules, but enjoyed playing on the scout team. He often made the starting defense look silly, according to his coaches.

But 2018 began what Green said was the toughest stretch of his career.

He finally got to play, but in the first game of the season he broke his ankle, sidelining him the rest of the year. He came back in the fall of 2019 feeling the healthiest he had in his entire career, but two weeks before the season he strained his PCL. He returned and played in five games, but he never felt right and later found out he actually had torn his PCL.

And that all led to the conversation he had with Cefalo this summer.

"It was tough," Green said. "It was more of a mental challenge than physical in a lot of ways. It just felt like nothing was going my way. But I kept going."

Thanks to Cefalo and Anderson's support, Green found a new confidence in himself this fall. He said he still doesn't feel 100%, but his new knee brace allows him to do things he couldn't otherwise do.

Playing in three of ASU's four games this season, Green already has more yards (247) than he had in his career entering the season (198).

"We need to keep building because there's still so much more in there, and I think we are just constantly tapping into it," Cefalo said. "I think football is part of his future. I have NFL scouts every week call me about Jonathan Adams, and they still ask about Dahu Green because they know how talented he is, how big he is."

Green is excited for what lies ahead -- football and nonfootball. He's already earned a degree in general studies and plans to earn his second degree this December in public relations, in which he also hopes to pursue a masters degree.

The goal is to make to the NFL, but for now he's enjoying finally playing in college.

It wasn't long ago that many people, including himself, thought he might never play again.

"I think a lot of people gave up. Glad I didn't," Anderson said. "It's good to have him here. And I'm proud of how he's grown up."