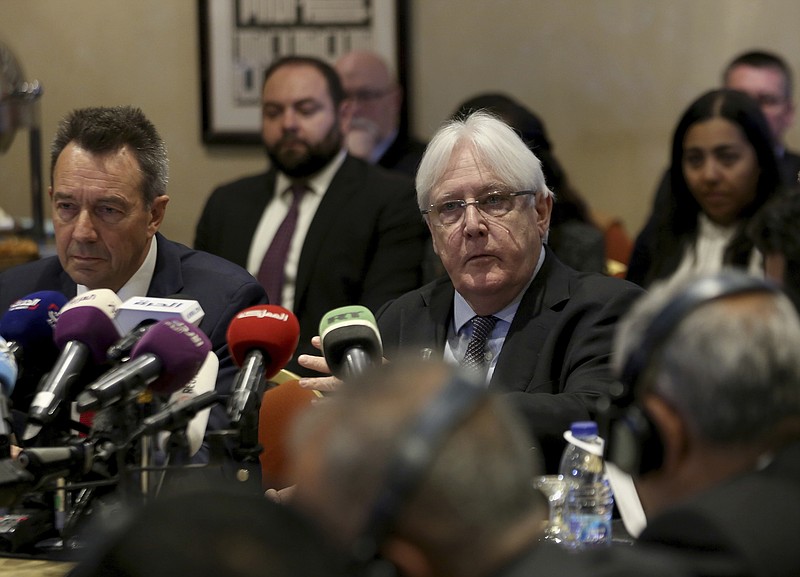 FILE - In this Feb. 5, 2019 file photo, United Nations Special Envoy to Yemen Martin Griffiths, center, and President of the International Committee of the Red Cross Peter Maurer, speak during a new round of talks by Yemen's warring parties in Amman, Jordan. Yemen’s warring sides on Friday, Sept. 18, 2020, started U.N.-brokered peace consultations in Switzerland to exchange prisoners, the United Nations said, part of a long-delayed deal aiming to end a conflict that has killed thousands of civilians and set off the world’s worst humanitarian crisis. (AP Photo/Raad Adayleh)

MOSCOW -- A trio of space travelers blasted off to the International Space Station on Wednesday, using for the first time a fast-track maneuver that allowed them to reach the orbiting outpost in a little more than three hours.

NASA's Kate Rubins along with Sergey Ryzhikov and Sergey Kud-Sverchkov of the Russian space agency Roscosmos lifted off as scheduled Wednesday morning from the Russia-leased Baikonur space launch facility in Kazakhstan for a six-month stint on the station.

For the first time, they tried a two-orbit approach and docked with the space station in just a little more than three hours after liftoff. Previously, it took twice as long for crews to reach the station.

They were welcomed by the station's NASA commander, Chris Cassidy, and Roscosmos cosmonauts Anatoly Ivanishin and Ivan Vagner, who have been aboard the complex since April and are scheduled to return to Earth in a week.

Speaking during Tuesday's pre-launch news conference at Baikonur, Rubins emphasized that the crew spent weeks in quarantine at the Star City training facility outside Moscow and then on Baikonur to avoid any threat from the coronavirus.

She said she was looking forward to scientific experiments planned for the mission.

"We're planning to try some really interesting things like bio-printing tissues and growing cells in space and, of course, continuing our work on sequencing DNA," Rubins said.

WASHINGTON -- Two Americans and the remains of a third held captive by Iranian-backed militants in Yemen were released on Wednesday in exchange for the return of about 250 of the Houthi rebels who were in Oman, according to the White House and sources in the region.

Oman's state news said the American captives were flown out of Yemen on an Omani plane. It said 250 "Yemeni brothers" who received treatment in Oman have been returned to Yemen's capital, Sanaa, on two flights as part of the exchange.

"The United States welcomes the release today of U.S. citizens Sandra Loli and Mikael Gidada from Houthi custody in Yemen," national security adviser Robert O'Brien said in a statement. "We send our condolences to the family of Bilal Fateen, whose remains will be repatriated as well."

O'Brien thanked the leaders of Oman and Saudi Arabia for their help in securing the release of the Americans.

Kieran Ramsey, director of the administration's hostage recovery cell, said Loli and Gidada will soon be on their way back to the United States.

Kash Patel, a deputy assistant to President Donald Trump who worked on the deal, told The Wall Street Journal that Loli had been held by the Houthis for about three years and that Gidada was held captive for about a year.

The release of the Americans came a day after a planned U.N.-brokered exchange of more than 1,000 prisoners between the Houthis and the internationally recognized government.

BERLIN -- Berlin police said Wednesday that they are investigating an attack on a conference room being set up for the far-right Alternative for Germany party, which said far-left "antifa" protesters were to blame.

The attack came Tuesday afternoon after two women who had made an appointment to tour the facility in the eastern neighborhood of Kaulsdorf were let inside, police said.

They then opened the doors to allow 10 to 15 masked people to storm inside, where they threw chairs and scattered confetti around the conference room being prepared for a meeting of the Alternative for Germany party's Berlin branch.

The masked people fled as officers arrived, and police said they had no immediate suspects.

The Alternative for Germany party said in a statement that the attackers were part of the anti-fascist movement and had threatened more action in the coming days.

The attacks were the deadliest in Mali since an Aug. 18 military coup overthrew the country's democratically elected president.

Ten civilians died when a car near a military convoy was ambushed between Bandiagara and Bankass, said Boubacar Diallo, a spokesman for the Malian defense minister.

Islamic extremist rebels were forced from power in Mali's northern towns after a 2013 French-led military operation. However, they quickly regrouped in the desert and began launching frequent attacks on the Malian army and its allies fighting the insurgency.