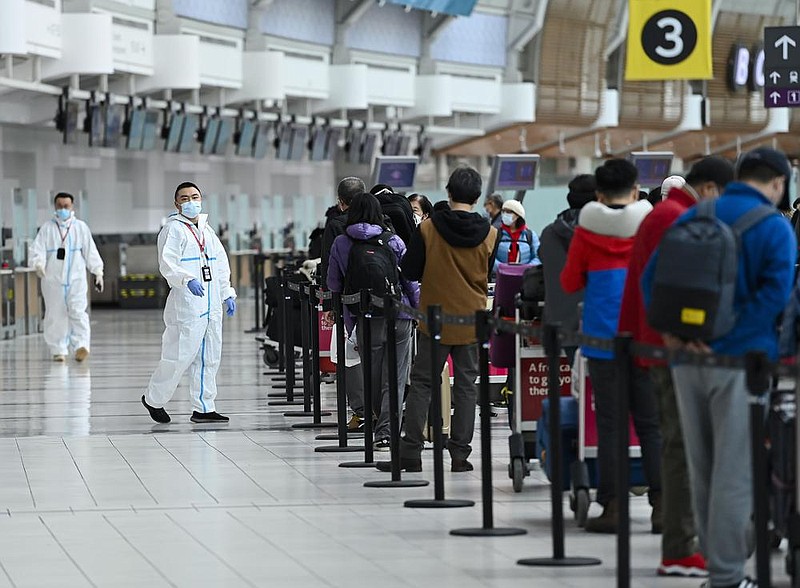 "We have committed to keeping Canadians safe and we keep extending the border closures because the States is not in a place where we would feel comfortable reopening those borders," the prime minister said Wednesday morning in an interview with a radio station in Winnipeg, Manitoba.

"We will continue to make sure that Canadian safety is top of mind when we move forward. We see the cases in the United States and elsewhere around the world, and we need to continue to keep these border controls in place," he added.

Trudeau closed Canada's international borders to non-essential travel in March when the covid-19 pandemic hit. Similar restrictions went into effect along the U.S.-Canada border with exemptions for trade.

The U.S. and Canadian governments have renewed the closure on a monthly basis, with nonessential travel currently restricted until Wednesday.

Facing pressure to ramp up relief efforts for hard-hit airlines and the tourism sector, Trudeau has resisted industry calls to loosen travel restrictions. His government is planning to promote Canada as a safe destination for international travel once the pandemic subsides.

There are no additional measures that come into force with the move announced Wednesday, but it will allow the government to enforce stricter measures in the future, either locally or nationally. The move is expected to begin Saturday.

France initially declared a state of health emergency in March, paving the way for the government to oblige citizens to stay home in lockdown. Macron was expected to address the nation on television Wednesday night.

According to Johns Hopkins University's running tally as of Wednesday, France has a total of 820,000 confirmed cases and just over 33,000 deaths. Covid-19 patients occupy a third of intensive care unit beds nationwide.

"We won't go to restaurants after 9 p.m., we won't see friends, we won't party, because that's how to pass on the virus," Macron said.

In the United Kingdom, Prime Minister Boris Johnson's new strategy for combating covid-19 seemed to unravel Wednesday as regional leaders chose their own paths and the mayors of the cities facing the toughest restrictions accused Johnson of using the crisis to divide them for political advantage.

Fearing Johnson hadn't gone far enough, two regions in the United Kingdom chose to impose tougher measures than the prime minister. Northern Ireland said it would close schools, pubs and restaurants to slow the spread of the virus, while Wales announced it would not allow in people from hot spots in other parts of the U.K.

As Liverpool, the only area that has been placed under England's toughest restrictions, prepared for the new rules to take effect, revelers spilled into the streets as bars closed Tuesday night amid fears they may not reopen again until spring.

Social media showed the images, including one video of a police car slowly moving through the crowd as partiers banged on the side of the car.

"These pictures shame our city, attacking our brave police officers is unacceptable," Liverpool City Mayor Joe Anderson tweeted. "Our health service is creaking, 300 in hospital and 30 people dead in week. Ignoring these facts is why we are in Tier 3 measures."

Coronavirus infections are surging again in the region of northern Italy where the pandemic first took hold in Europe, renewing pressure on hospitals and health care workers.

At Milan's San Paolo Hospital, a ward dedicated to covid-19 patients and outfitted with breathing machines, reopened over the weekend, a sign that the city and the surrounding Lombardy region is entering another emergency phase of the pandemic.

In response to the current outbreak, Premier Giuseppe Conte's government tightened nationwide restrictions twice inside a week. Starting today, Italians are prohibited from playing casual pickup sports, bars and restaurants face a midnight curfew, and private celebrations in public venues are banned. Masks are mandatory outdoors as of last week.

Information for this article was contributed by Kait Bolongaro of Bloomberg News; and by Danica Kirka, Luca Bruno and Colleen Barry of The Associated Press.