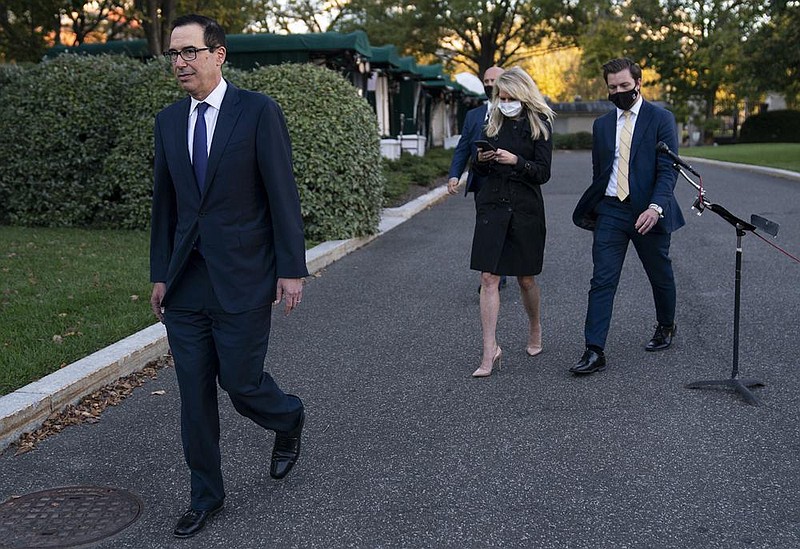 Treasury Secretary Steven Mnuchin walks away Wednesday outside the White House after speaking with reporters about negotiations on another coronavirus relief package. Mnuchin criticized House Speaker Nancy Pelosi’s “all or nothing” approach, saying they should act immediately to help specific sectors. More photos at arkansasonline.com/1015stimulus/. (AP/Evan Vucci)

WASHINGTON -- Treasury Secretary Steven Mnuchin said Wednesday that a new economic relief bill is unlikely before the election, suggesting that Democrats are unwilling to give President Donald Trump a victory.

"I'd say at this point getting something done before the election and executing on that would be difficult, just given where we are," Mnuchin said during an event hosted by the Milken Institute's Global Conference.

Asked whether Democrats are unwilling to make a deal because they don't want to give Trump a win three weeks before the election, Mnuchin replied: "I think that definitely is part of the reality. That's definitely an issue."

"But the president is very focused on when he wins, we will need to do more. So that's part of the reason to continue to work on this," the treasury secretary added. "The clock will not stop."

Mnuchin made his comments after an hourlong conversation he had Wednesday with House Speaker Nancy Pelosi, D-Calif. The two have been negotiating for a couple of weeks. Trump on Wednesday called for a deal in a Twitter post, urging negotiators to "Go big or go home!!!"

Mnuchin on Friday made Pelosi a $1.8 trillion offer that she rejected as inadequate in many respects, including the administration not agreeing to specifics on a national coronavirus testing strategy.

"It's like you're bleeding and they keep putting Band-Aids on it, but they're not addressing the problem," Pelosi told House Democratic leaders in a meeting Wednesday, referring to the administration's refusal to embrace a national strategic testing plan. Her comments were confirmed by a person familiar with them who spoke on the condition of anonymity because the meeting was private.

Pelosi's spokesman, Drew Hammill, said on Twitter that Pelosi and Mnuchin had a "productive" conversation and would speak again today.

White House press secretary Kayleigh McEnany added to signs that a deal isn't in the cards with a Wednesday afternoon tweet saying, "Senate Democrats who now say we should focus on relief for the American People should bring their empty calls directly to Nancy Pelosi."

The speaker is seeking to tamp down restlessness among Democrats who want to take what the White House is offering after Trump enlarged his proposal from $1.6 trillion to $1.8 trillion. A number have encouraged her to get an agreement.

Pelosi said in the CNN interview: "Ro Khanna, that's nice. That isn't what we're going to do."

Trump on Wednesday blamed Democrats for the impasse, telling the New York Economic Club: "I'd like to see the Democrats loosen up a little bit."

He said that concern about the rising national debt is "very much on my mind," but that the issue would be taken care of because of faster economic growth. The federal deficit has broken records because of the government's efforts in response to the coronavirus, and it is expected to breach $3 trillion for this year after reaching $1 trillion last year.

SCALE OF A DEAL

Mnuchin and Pelosi have agreed on some areas, including a new round of $1,200 stimulus checks, but have remained far apart on funding for state and local aid, child care and unemployment insurance. And they continue to argue over specific language in some areas. Democrats also oppose liability protections the administration wants in any deal.

Mnuchin criticized Pelosi's focus on a comprehensive deal, saying they should act immediately to help specific sectors, such as airlines that have begun mass furloughs after federal aid expired at the end of September. Pelosi and Mnuchin briefly discussed a stand-alone airline-aid bill last week, but Pelosi then rejected that idea amid a backlash from some unions and Democrats who questioned why only airlines should get help.

"From our perspective, we could have immediate help to many different parts of the economy now," Mnuchin said.

"I don't agree with the speaker's approach of 'we have to do all or nothing.' We're continuing to negotiate a comprehensive bill, but we want to put money into the economy now," Mnuchin said.

Over the weekend, Mnuchin called on Congress to redirect about $130 billion in unused funding from the Paycheck Protection Program intended for small businesses while negotiations continue on a broader relief effort.

Pelosi has rejected such piecemeal efforts. She defended her approach in an interview on CNN on Tuesday night, telling host Wolf Blitzer that he didn't know what he was talking about when he pressed her on why she wouldn't agree to Mnuchin's $1.8 trillion offer.

"I don't know why you're always an apologist" for the Republican position, she told Blitzer.

"Honest to God, I can't get over it," Pelosi said of those Democrats calling for a deal now. "They're not negotiating this situation," she said.

She later added, "We're not even close to the good."

Senate Republicans oppose the Mnuchin offer, saying it is too costly, and they convened a conference call with Mnuchin and White House Chief of Staff Mark Meadows over the weekend to make their opposition clear.

McConnell, R-Ky., intends to try to advance a narrow $500 billion bill next week on the Senate floor, where it's likely to encounter Democratic opposition. That vote is planned for Monday, according to Sen.Charles Grassley, R-Iowa, speaking Wednesday in the Judiciary Committee.

With less than three weeks remaining until the Nov. 3 election, the failure to secure further fiscal help for millions of unemployed Americans and for businesses facing another rise in coronavirus cases will pose a fresh test for financial markets.

[Video not showing up above? Click here to view » https://www.youtube.com/watch?v=cuNzjA3E4Xc]

McConnell himself assessed last week that "the proximity to the elections and the differences of opinion about what is needed are pretty vast."

The White House and Congress enacted several laws earlier this year in an effort to address the economic fallout from the coronavirus pandemic, approving close to $3 trillion in new spending. Those laws provided a temporary boost in unemployment benefits, aid for small businesses, a round of stimulus checks, aid for the airline industry, and a variety of other programs.

Some of these programs have expired in recent months, though, and there are numerous signs that the economy is straining. The airline industry and other sectors have recent laid off thousands of additional workers, and many Americans remain behind on their utility bills, mortgage payments and rent.

Federal Reserve Chairman Jerome Powell has said there could be severe complications in the economic recovery if Congress doesn't approve more assistance.

Information for this article was contributed by Erica Werner of The Washington Post and by Billy House of Bloomberg News.