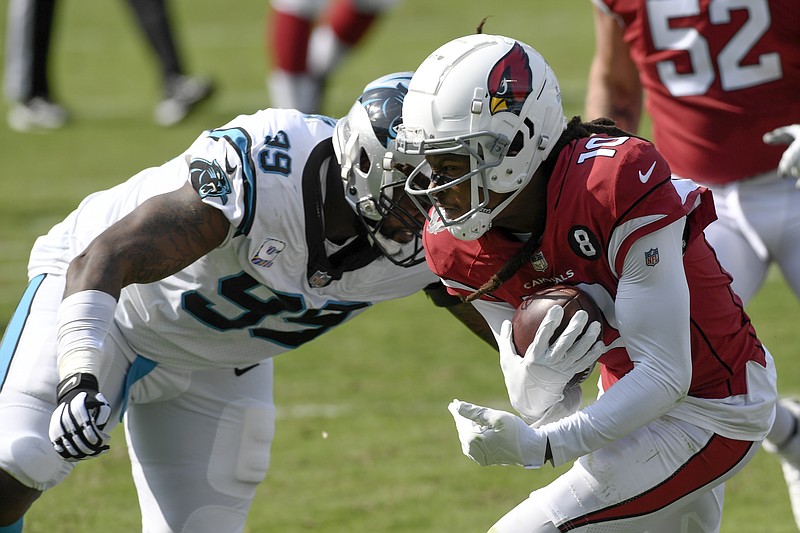 The Los Angeles Angels granted the Chicago White Sox permission to interview Hall of Famer Tony La Russa for their managing job, a person familiar with the situation said Wednesday. The person, confirming a USA Today report, spoke on the condition of anonymity because the Angels typically do not comment on personnel matters. A three-time World Series-winning manager, the 76-year-old La Russa joined the Angels prior to this season as senior adviser of baseball operations. The White Sox agreed to split with Rick Renteria after a disappointing finish to a breakthrough season in which Chicago made the playoffs for the first time since 2008. La Russa, who started his managing career with the White Sox during the 1979 season, hasn't managed since 2011, when he led St. Louis past Texas in the World Series. He also won championships with Oakland in 1989 and the Cardinals in 2006.

The NFL has canceled January's Pro Bowl scheduled for Las Vegas. During an owners meeting held virtually on Wednesday, the league opted to call off the all-star game, hoping to replace it with a variety of virtual activities. The NFL needs flexibility in January in case it needs to move regular-season games to that month because of the coronavirus pandemic. The Pro Bowl -- set for Jan. 31, a week before the Super Bowl -- has lost much of its attractiveness in recent years. Many of the chosen players decided not to participate, and, naturally, players from the two Super Bowl teams don't go. If there is a Pro Bowl in 2022, the 32 owners voted to return it to the new Allegiant Stadium in Las Vegas.

Cards' LB out for season

All-Pro linebacker Chandler Jones of the Arizona Cardinals is out for the season because of a biceps injury that requires surgery. An MRI earlier this week confirmed the extent of the injury, which happened during the first half of Arizona's 30-10 win over the New York Jets on Sunday. Coach Kliff Kingsbury said Wednesday that Jones has elected to have the season-ending surgery. The recovery time is expected to be three to four months. The 6-5, 265-pound Jones has been one of the league's premier pass rushers since coming to Arizona, with 61 sacks over the past 41/2 seasons. He's also been durable up until Sunday and played in all 16 games from 2016-19. It's a huge blow for the Cardinals' defense, which has improved after giving up the most total yards in the NFL last season. Jones had a career-high 19 sacks in 2019.

The Panthers have lost two-time Pro Bowl defensive tackle Kawann Short to a shoulder injury for the second consecutive season, and 2019 All-Pro running back Christian McCaffrey is not quite ready to return to action either. Panthers Coach Matt Rhule said Short will need season-ending surgery on his right shoulder, but wouldn't get into the specifics of the injury. Short missed the final 14 games of last season after tearing the rotator cuff in his left shoulder. He will be placed on injured reserve. Short injured the shoulder in the third quarter of Carolina's 23-16 win over the Atlanta Falcons on Sunday.

The Jacksonville Jaguars acquired linebacker Kamalei Correa from the Tennessee Titans on Wednesday for a late-round pick. The Jaguars sent a sixth-round pick in 2021 to the Titans for Correa and a seventh-round selection. Tennessee Coach Mike Vrabel said earlier in the day the team was preparing to release Correa. The Jaguars (1-4) played without starter Myles Jack (ankle) last week at Houston and lost backup Dakota Allen (foot) in the team's fourth consecutive loss.

Conference USA has pushed its football championship game back two weeks to Dec. 18, giving the league additional time to make up games postponed because of the coronavirus. The league said Wednesday that its 16th championship game will now be played on a Friday night. The game had been scheduled for Dec. 5. There have been three games matching C-USA opponents postponed in the past two weeks. Seven other nonconference matchups were either postponed or canceled.

Dayton, Ohio, will continue to host the NCAA Tournament First Four through at least 2026. The NCAA on Wednesday announced the extension of the contract giving the University of Dayton Arena the rights to the tournament play-in games. UD Arena has hosted the event since the First Four began in 2011. Before that, it hosted a single play-in game for the tournament from 2001-10. The arena seats around 12,000 and regularly sells out for the four games played over two days. The previous NCAA contract with Dayton ran through 2022.

The Montreal Canadiens have given a two-year contract extension to goaltender Jake Allen. The deal is worth $2.875 million per season and keeps Allen under contract through the 2022-23 season. Montreal acquired Allen in a trade with St. Louis on Sept. 2. The Canadiens hope he can be a reliable backup to All-Star Carey Price. The 30-year-old Allen played 24 games with the Blues this past season and posted a 12-6-3 record with a 2.15 goals-against average and .927 save percentage and two shutouts. In five playoff appearances, he went 2-1-1 with a 1.89 GAA and a .935 save percentage.

Top-seeded Daniil Medvedev recovered from a shaky start to begin his defense of the St. Petersburg (Russia) Open title with a 3-6, 6-3, 6-0 win over Richard Gasquet on Wednesday. Medvedev hit 22 aces to secure his first win since losing to Dominic Thiem in the U.S. Open semifinals, having lost in the first round in Hamburg and at the French Open. Medvedev set up a second-round match with Reilly Opelka, who earned a 3-6, 7-6 (5), 6-2 win over qualifier Nino Serdarusic. Stan Wawrinka booked his spot in the quarterfinals with a 6-1, 3-6, 6-3 win over Evgeny Donskoy, a wild-card entry who has now competed in the St. Petersburg tournament 12 times without ever getting past the second round.

Dennis Novak reached his first ATP tour quarterfinal by beating fourth-seeded Benoit Paire 6-3, 6-4 Wednesday at the Cologne (Germany) Indoors. Paire struggled with his serve, landing just 46% of first serves and double-faulting four times in the second-round match. Paire, who had a first-round bye in Cologne, is 1-5 since the tour resumed amid the pandemic and had to withdraw from the U.S. Open when he tested positive for the coronavirus. Novak takes on either eighth-seeded Marin Cilic or Alejandro Davidovich Fokina in the quarterfinals. Sixth-seeded Hubert Hurkacz won 6-4, 6-3 in the second round against Mischa Zverev, the older brother of top-seeded Alexander Zverev. Hurkacz will face either Roberto Bautista Agut or Gilles Simon in the quarterfinals.