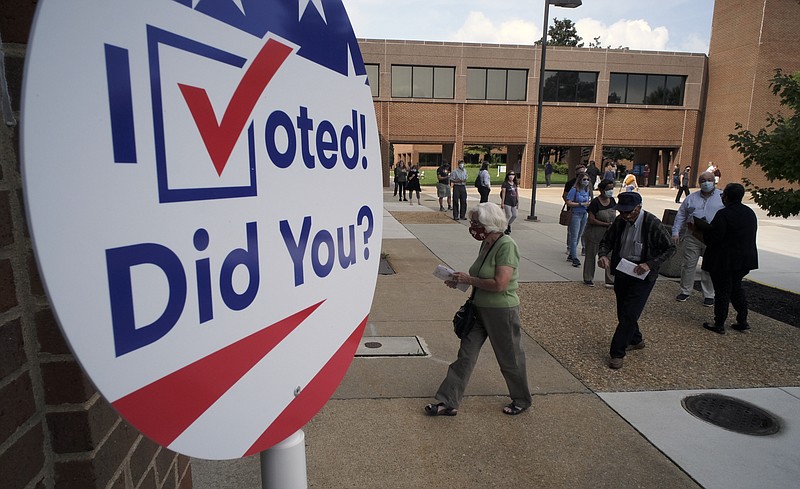 Voters line up outside to cast ballots in the general election at the Henrico County general registrar's office in Henrico County, Va., Friday, Sept. 18, 2020, on the first day of the state's 45-day early voting period. (Bob Brown/Richmond Times-Dispatch via AP)

RICHMOND, Va. -- A federal judge on Wednesday extended the deadline for registering to vote in Virginia by 48 hours after the state's online voter registration system went down because of an accidentally severed cable.

The order by U.S. District Judge John Gibney in Richmond is an effort to make up for several hours of lost time on Tuesday, which had been the last day to register before the November election.

The shutdown of the state's website caused "a tremendous harm" to the people who want to register to vote, Gibney said.

Both the voting-rights advocates seeking the extension and the Virginia state officials they sued agreed that more time should be granted. The deadline to register to vote is now 11:59 p.m. today. It includes both online and in-person registration.

"We are 21 days away from the most important election of our lifetimes, and I want to make sure that every Virginian who wants to vote has the opportunity to do so," Virginia Attorney General Mark Herring said in a statement.

No objections to the extension were raised in court or from lawmakers, Republicans or Democrat, in the nearby statehouse.

The Lawyers' Committee for Civil Rights Under Law had sought the extension, saying voters would be "absolutely disenfranchised" without it. The group also said that Virginia should make "a significant effort" to tell the public about the change.

Committee President Kristen Clarke said she expects tens of thousands of people to register during the extension period. In 2016, after last-minute computer glitches also prompted a judge to grant an extension, more than 25,000 people registered during a 36-hour extension.

"What's key will be the state taking adequate steps to notify the public," Clarke said.

An attorney for the state Department of Elections said the department will issue advisories to voter registrars around the state, send out press releases and publicize the extension on social media.

Voting advocates said the accident couldn't have come at a worse time. Many people wait until the the day of the deadline to register, particularly after being reminded on social media and in the news.

Secretary of Administration Keyanna Conner said the circuit was installed this spring to handle increased web demand during the coronavirus pandemic. She said backup circuits aren't as large as the main circuit, but plans are in place to upgrade them.

Northam, a Democrat, supported the extension, and said it appeared that only the courts could change the state's voter-registration deadline.

This isn't the first time technical problems affected Virginians' ability to register under a looming deadline.

In 2016, an unknown number of people were not able to register because of computer glitches during unprecedented demand spurred by social media reminders. A voter advocacy group, the New Virginia Majority Education Fund, sued for an extension, and a federal judge granted one.