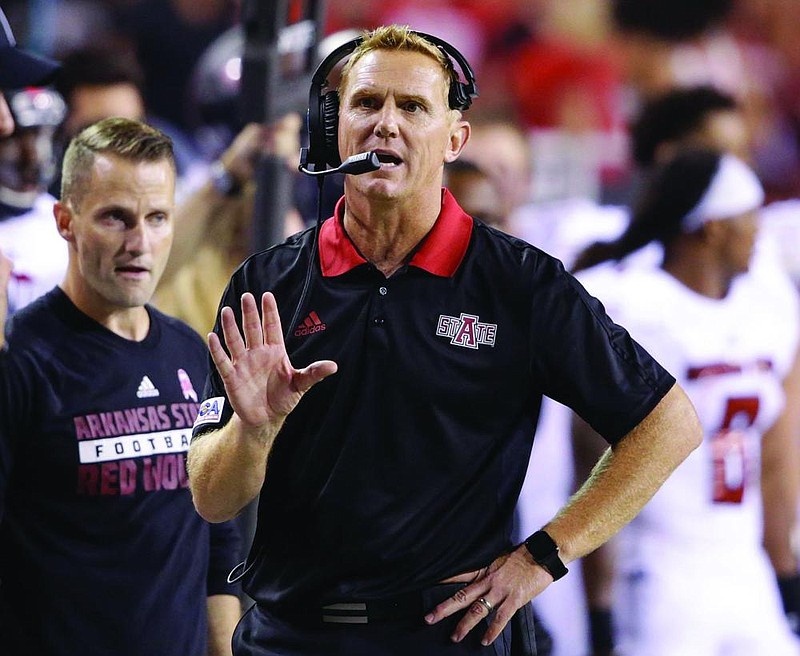 JONESBORO -- On Oct. 5, 2019, Georgia State made Arkansas State University Coach Blake Anderson question everything he and his team were doing defensively.

The Panthers dominated the Red Wolves, totaling 722 yards and 39 first downs on the way to a 52-38 victory. The following week, at the halfway point in the 2019 season, ASU moved away from its four-man front in exchange for its current three-man front.

A year later, Arkansas State (2-2, 0-1 Sun Belt) is hoping to turn the tables on Georgia State (1-1, 0-1) in Centennial Bank Stadium after being embarrassed last year in Atlanta.

"We got exposed," Anderson said. "They were pretty embarrassed by that. Defensively, we played about as bad as you could play. Obviously, it spurred a change in the defense because of the personnel.

"Our guys, they remember. There are new faces in the room, but there are a lot of guys that made that trip, and it was a long trip home because we felt like we were in a position to -- having come out of Troy with a win -- to do some good things conference-wise. And it really dug a hole."

Arkansas State isn't quite in a hole yet this season, but a 52-23 loss to Coastal Carolina to start Sun Belt play has turned the Georgia State game into a "must-win," according to Anderson.

If ASU wants to win tonight, it needs its defense to not repeat last year's debacle.

"It's going to be a challenge for our defense. A lot of the same things we saw with Coastal. A lot of the same issues that we saw against Coastal without the triple-option dynamic. More RPO-style stuff, but still just as dangerous."

Georgia State has played just two games this season because of covid-19 cancellations, but its run-pass-option offense has been impressive.

The Panthers are 21st in the country in total offense, averaging 452 yards per game. They rank 10th in rushing offense, averaging 235 yards on the ground per game thanks to junior running back Destin Coates, who has rushed for 263 yards and 3 touchdowns on 57 carries. And similar to Coastal Carolina, Georgia State boasts a mobile freshman quarterback in Cornelious Brown IV, who has totaled 524 yards and five touchdowns.

"They can throw it, they can run it -- they run the RPO game so they use the whole field," said defensive coordinator David Duggan, whose unit ranks 63rd in total defense. "It's not so much formationally as challenging, but the way that they use it, you have to defend everything. And your players really have to execute well on a short week preparing for all the different options they have off of their plays."

With only two Georgia State games on tape and a short week to prepare, ASU's defense will have to focus more on itself and executing assignments more than what Georgia State might throw at it, Anderson said.

"It's been a while since they've played. I don't know how much they've been shut down, how much they've been practicing -- we really don't," Anderson said. "We can control us, that's it. They have been working on us for two weeks, for all I know. We've just got to expect they're going to come in here and play their best ball."

Coming off a 50-27 win over the University of Central Arkansas on Saturday, in which the defense forced three turnovers, ASU is hoping to ride that momentum into Sun Belt play.

But more than anything, many of Arkansas State's defensive players and coaches are out to prove something against Georgia State -- a team that essentially turned the Red Wolves into the defense they are today.

"I know I am. And I think our players are, too," Duggan said. "We didn't perform very well last season against Georgia State. So hopefully we can learn from some of the mistakes we made last week and correct them and make sure we put them in a good position to be successful. That's the key."