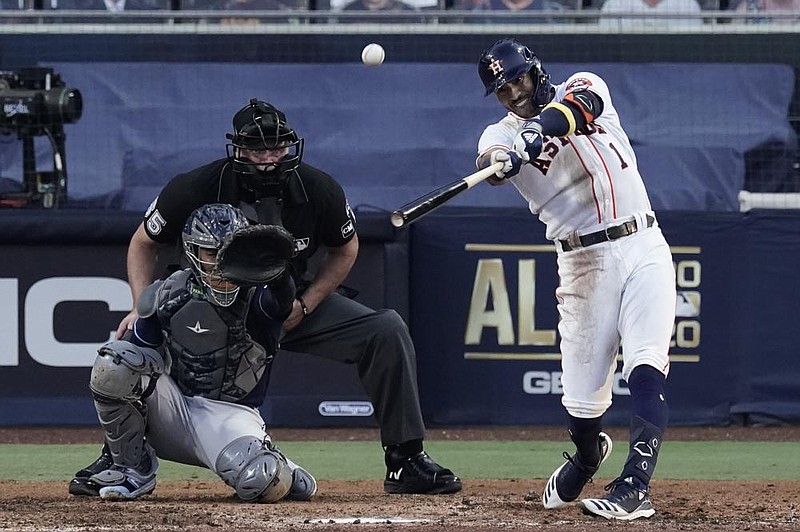 Houston’s Carlos Correa hit a game-winning home run in the bottom of the ninth inning Thursday to give the Astros a 4-3 victory over the Tampa Bay Rays at Petco Park in San Diego. The Astros now trail 3-2 in the best-of-7 American League Championship Series. (AP/Jae C. Hong)

SAN DIEGO -- Before Carlos Correa headed to the plate in the ninth inning of Game 5 of the American League Championship Series, he told Dusty Baker, "Walkoff."

The 71-year-old manager replied, "Go ahead, man," and then said a quick prayer to his father and brother.

If the Houston Astros had been forced to go extra innings against the Tampa Bay Rays, Baker thought, he'd have to burn Framber Valdez, his projected Game 6 starter.

Baker's prayer was answered with a loud crack.

Correa homered with one out in the ninth, and the Astros beat the Rays 4-3 Thursday behind sensational pitching from five rookies, closing to 3-2 in the series.

Correa drove a fastball at the letters from Nick Anderson just past the palm trees to the right of the batter's eye at Petco Park, watched the ball for a few steps and then flung his bat. He was greeted at home by his ecstatic teammates and had a long hug with Baker.

"I don't mean no disrespect when I call my shot," said Correa, who added that he went to the indoor cage after his second and third at-bats to work with hitting coach Alex Cintron and make adjustments.

"We felt it and it was like, 'Wow. This feels good,' " the shortstop said.

He passed on his positive view to teammate Altuve after the eighth.

Correa is only 3 for 18 in the series, but two of the hits are home runs.

Houston won a second consecutive elimination game thanks in large part to starter Luis Garcia and four fellow rookies, who combined to hold the Rays to 2 runs and 4 hits through 62/3 innings before Baker finally turned to a veteran, Josh James. Ryan Pressly, the seventh Astros pitcher, got the victory.

The Braves took a 3-1 lead in the National League Championship Series, bouncing back from getting pounded 15-3 the previous night. Atlanta will try to reach its first World Series since 1999 when it plays Game 5 tonight.

Ozuna had four hits and drove in four runs. It was 1-1 in the sixth when the Braves scored six times, with Freeman hitting a tiebreaking double and Ozuna following with an RBI double that chased Kershaw.

A night after the Dodgers had a record 11-run first, they managed only one hit -- a home run by Edwin Ríos -- over six innings against 22-year-old rookie right-hander Bryse Wilson in his postseason debut.

While the Braves' outburst also lasted more than a half-hour but without as many runs as LA's a day earlier, it was more than big enough enough after Ronald Acuna Jr. led off the decisive six-run sixth with an infield single on a play that ended with him, Kershaw and second baseman Kike Hernandez all on the ground. They all took tumbles because of their effort, and weren't knocked down by the sometimes bothersome breezy conditions in the new Texas ballpark with the roof open.

Kershaw fell down after coming off the mound while reaching up to try to field the high-chopper. Hernandez went to the ground after grabbing the ball and making a sidearm throw then went wide while Acuna tumbled after passing the base and landed awkwardly on his left wrist that was irritated twice during the regular season. Acuna went to second base because of the errant throw after being tended to for several moments.

After trying glasses in the field and getting eyedrops early in the game, Freeman apparently had no problems seeing when he doubled home Acuna for a 2-1 lead before Ozuna followed with another double. Reliever Brusdar Graterol got the first out before giving up three consecutive hits, including Dansby Swanson's two-run double and Austin Riley's RBI single. Rookie center fielder Cristian Pache capped the inning with an RBI single that made it 7-1.

Freeman and Ozuna each added RBI singles in the eighth.

Atlanta had gotten even 1-1 in the fourth when Ozuna turned an 86-mph slider from Kershaw into a 109-mph rocket that went 422 feet to left for his second postseason home run. Ozuna went even deeper in the seventh, a 434-foot shot to straight away center.

All games on TBS 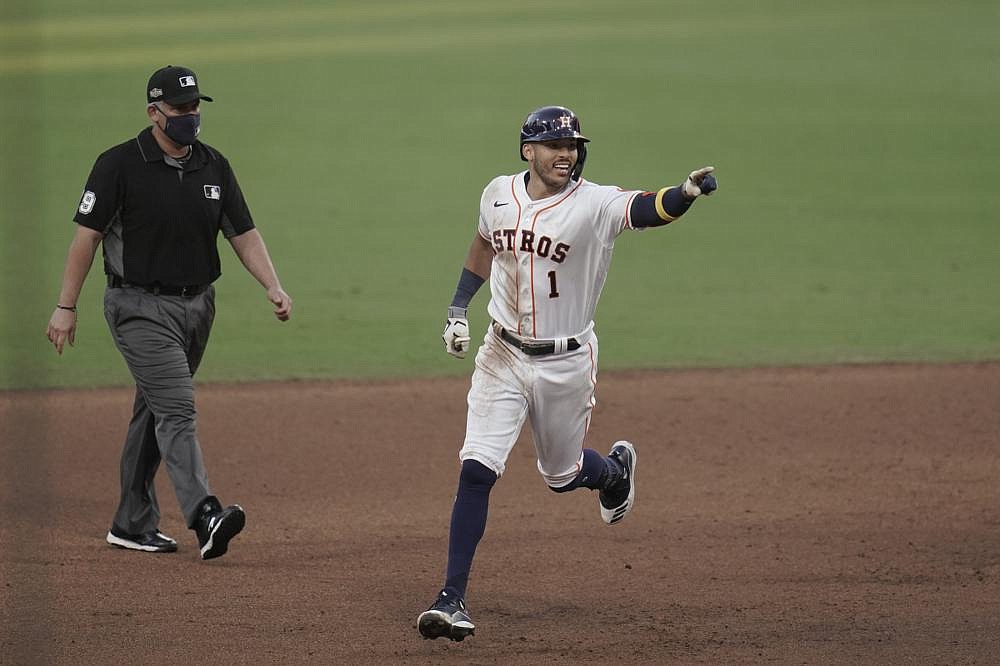 Carlos Correa (right) of the Houston Astros celebrates after hitting the winning home run in the ninth inning of the Astros’ 4-3 victory over the Tampa Bay Rays in Game 5 of their American League Championship Series on Thursday in San Diego. (AP/Gregory Bull)
ADVERTISEMENT