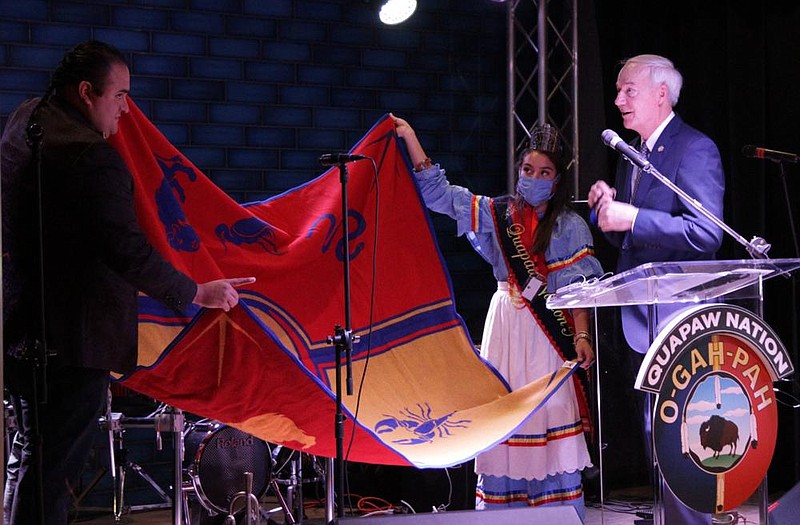 From the outside, Saracen Casino Resort still has vestiges of the active construction site it has been since August of last year, but on the inside, the state's largest purpose-built casino could sit alongside any Las Vegas or Gulf Coast gambling palace and be right at home. From the brand-new, state-of-the-art slot machines to the seven restaurants featuring upscale fare paired with locally sourced ingredients, on Thursday night the 80,000-square-foot facility was filled with flashing lights, ringing bells, music, and finally, people.

More than 300 people from Pine Bluff, Jefferson County, Little Rock, and around the state were on hand for a sneak preview and unofficial launch of the eagerly awaited gambling mecca and economic generator that promises steady employment for hundreds of residents and entertainment for thousands of people from all over Arkansas and beyond.

Jefferson County Judge Gerald Robinson was effusive and enthusiastic in his remarks marking the coming opening of the highly anticipated casino.

"This represents economic stability, not just for Jefferson County, but for all of Southeast Arkansas," Robinson said. "The dirt was turned and a seed was planted. Am I happy? You're doggoned right I'm happy. We have jobs. Look out at the floor and we have people with smiling faces waiting to help."

[Video not showing up above? Click here to view » https://www.youtube.com/watch?v=tWlWYobOXbo]

Then, looking out over the crowd toward the blinking lights and ringing bells that could be heard from the gaming floor, he said, effusively, "Look at this beautiful building. I am going to enjoy this."

Byrd and Glass presented Hutchinson with a gift of an authentic tribal blanket, which Byrd said is one of the Quapaw Nation's highest forms of tribute.

"The blanket is a sign of respect," Byrd told the Pine Bluff Commercial. "It represents trust and unity. These are the messages that I wanted to portray and exemplify."

In return, Hutchinson presented Byrd with an Arkansas Traveler certificate, an honorary title bestowed on individuals who serve as goodwill ambassadors for the state.

"I know that with your heritage you are actually an Arkansas native so it's a little presumptuous to give you an Arkansas Traveler's certificate," Hutchinson said. "But we want to welcome you home and give this to you for what you mean to the state of Arkansas."

Earlier, Hutchinson told the Pine Bluff Commercial that, following his walk-through tour of the facility, he was most struck by the sheer size.

"It's large, it's got a lot of lights, it's got everything imaginable," he said. "Of course, what I looked at very closely would be the safety protocols that are here and what I'm comforted with is that masks are required for everyone who comes into the casino complex and secondly, they've gone to the extra lengths of putting partitions up between many of the slot machines. Those are very positive steps."

Even so, Hutchinson said, anyone who looks at a large venue such as Saracen Casino would need to consider their own health and make good decisions to protect themselves.

"What's interesting is the number of people walking around here who have surgical masks on," he said. "People are really mindful today of the safety and that's one of the reasons I came here. They have worked really hard during the construction to control the virus and I expect that same kind of discipline as they open up."

Despite the governor's opposition to Amendment 100 when it was put in front of the voters, Hutchinson said he recognizes that the casino represents a unique economic opportunity for Jefferson County.

"You cannot deny the need for 700 permanent jobs right here in Pine Bluff," he said. "People are excited about filling those jobs. The construction costs, the investment, the side businesses and the supply chain will all add to the economic impact on Pine Bluff and I know they are excited about that here. That's why I'm here, to share in that new opportunity for Pine Bluff to experience an economic renaissance."

Those in attendance were able to experience brand-new, state-of-the-art slot machines and table games, and many headed to the gaming floor to try their luck once the introductory program was over.

"I should have bet it all on red the second I sat down," she said. "That would have paid off, but no, I had to do something else. But that's how it works sometimes."

On the other side of the casino, Prosecuting Attorney Kyle Hunter was watching his wife, Tina, play a slot machine with much better results. He said she began with $100 and within a few minutes was up to $1,250.

"If she hits the double jackpot," Hunter said with a grin, "we're out of here." 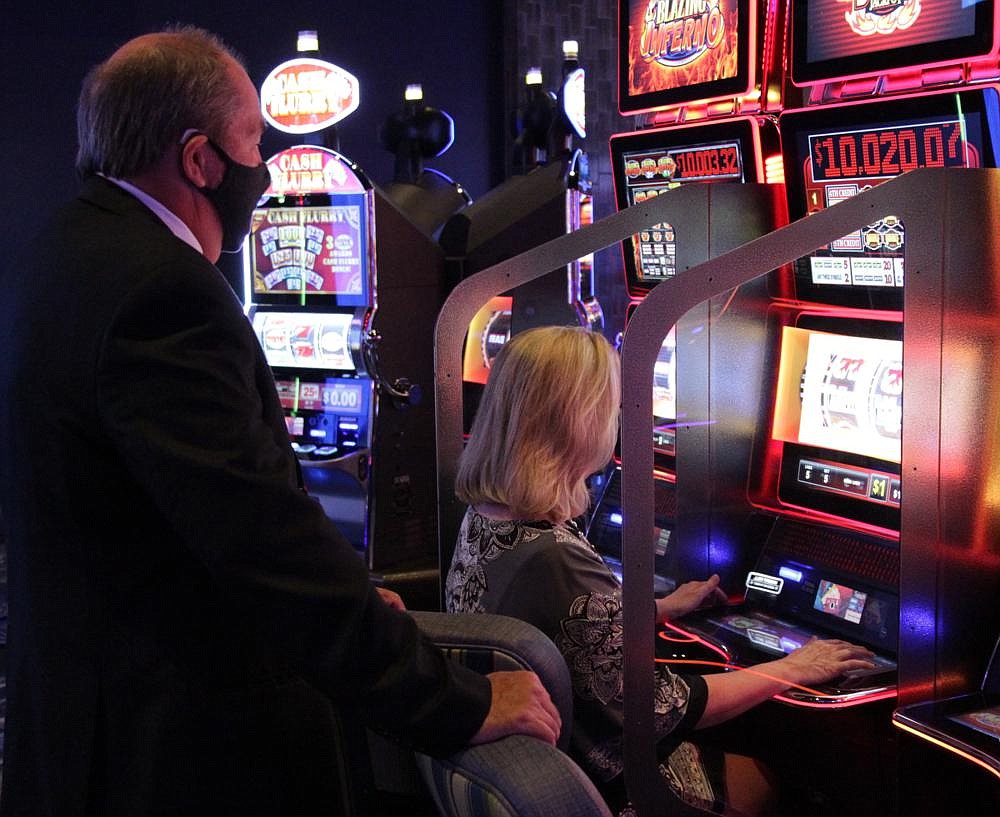 Prosecuting Attorney Kyle Hunter watches as his wife, Tina, racks up points on one of the new progressive slot machines at Saracen Casino. When the photo was taken, Tina Hunter was up to around $1,250 on the machine. “She started out with $100,” Kyle said. “If she hits the double jackpot, we’re out of here.” (Pine Bluff Commercial/Dale Ellis) 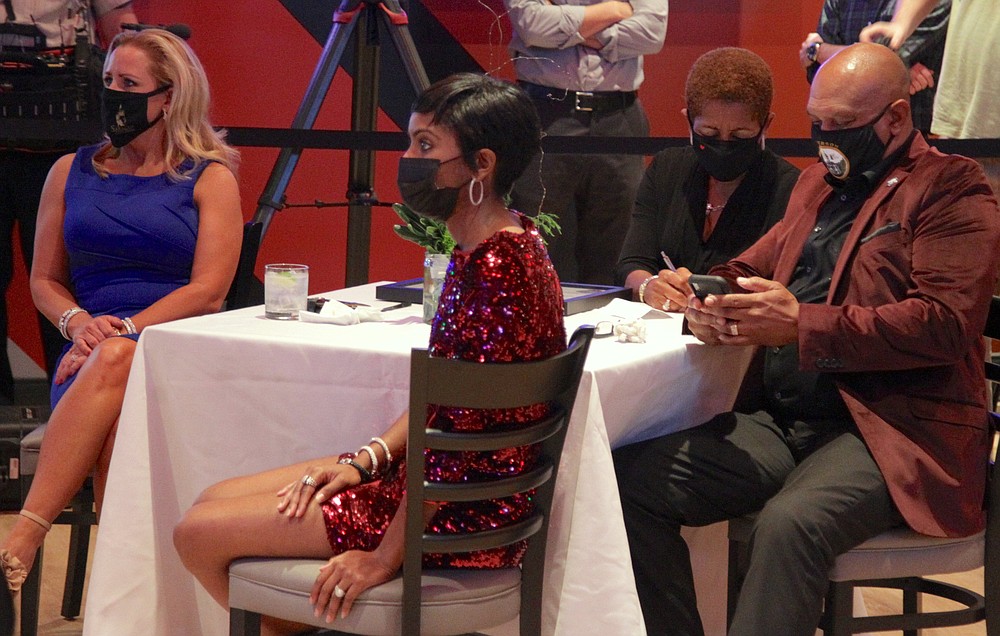