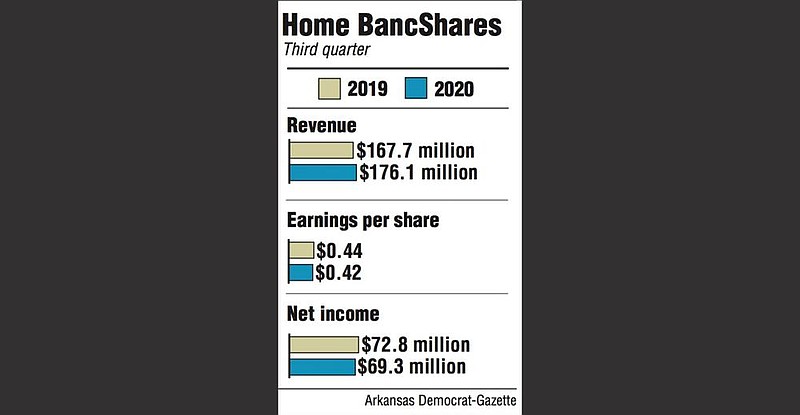 Home BancShares Inc. delivered profits of $69.3 million in the third quarter though net income and earnings per share were both down from a year ago, the bank reported Thursday.

The results did top Wall Street consensus, which forecast earnings per share of 39 cents. Net income also beat the consensus of $64.6 million.

Home BancShares, which operates as Centennial Bank, blew past last year's revenue. The bank achieved revenue of $176.1 million in the quarter, up 5% from $167.7 million in the third quarter last year.

"I think we had another good quarter," John Allison, the chairman and chief executive, told analysts on a conference call Thursday afternoon. "I'm pretty pleased with the operations of the company."

The bank recorded $14 million in total credit loss expense "primarily due to the company increasing reserves on deferred loans resulting from ongoing uncertainties related to the covid-19 pandemic," it said in a news release.

"Due to the inherent risk associated with deferred loans, management recorded an additional reserve on the deferred loans," the statement said. The bank reported $933.8 million in deferrals on 330 loans at the end of the quarter.

Banks across the nation have increased deferrals to give customers more financial breathing room during the pandemic. Deferrals allow borrowers to suspend payments, typically for 90 days.

The measurement is important because it is sensitive to economic conditions and demonstrates the bank's ability to remain profitable in a difficult economy like the current pandemic environment.

The pandemic remains a drag on earnings, said Treasurer and Chief Financial Officer Brian Davis, who noted "there has been a tremendous amount of liquidity in the market" related to covid-19. That diluted net interest margin by five basis points, he said.

Regarding the deferred loan amount of $933.8 million, Chief Lending Officer Kevin Hester said about half of the total is in the hospitality industry, which is one of the nation's most-troubled economic sectors in the pandemic. The bank is not considering, at this time, that it will have to charge-off delinquent loans.

"The vast majority are paying their interest up to date," Hester said. "That's very encouraging to me."

Asked about the potential to begin buying back its stock again, Allison said it is under consideration but no decision has been made. "The executive committee is in the middle of discussing that," he said.