Lassoing Corral one task for Hogs 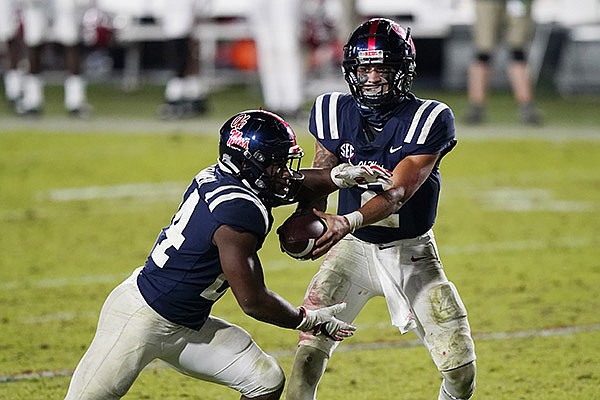 FAYETTEVILLE -- The revived defense of the Arkansas Razorbacks has seen strong combinations of offensive fronts, tailbacks, wideouts, tight ends and quarterback so far in games against No. 4 Georgia, No. 16 Mississippi State and No. 13 Auburn.

But the Razorbacks haven't seen anything like the assembly of skill talent and solid offensive linemen they'll face on Saturday at 2:30 p.m. against Ole Miss.

Sophomore quarterback Matt Corral has advanced to next-level status in his first season under the tutelage of Coach Lane Kiffin and coordinator Jeff Lebby.

The Rebels haven't been playing chopped liver either. Their games have been against Florida, Kentucky and traditional defensive stalwart Alabama.

The Arkansas secondary will be up against the nation's top-ranked receiver Elijah Moore, who has 462 receiving yards and averages 10.3 receptions per game. Tight ends Kenny Yeboah and Dontario Drummond and tailbacks Jerrion Ealy and Snoop Connor give the Rebels playmakers all over.

Cornerback Hudson Clark, who made his first start last week at Auburn, and the Arkansas defensive backs will have their hands full.

"It's definitely one of the biggest challenges we've seen so far," Clark said. "Their offense has put up a lot of points against really good defenses.

"They go really fast on offense, so we're running to the ball. We're getting set up. We're trying to get ready for that. It's going to be a really good challenge, but I think we're ready."

The Razorbacks hope to get some key defensive players back, while others are ailing. Linebacker Bumper Pool is questionable after having to come out of each of the last two games with shoulder issues. Neither Pool nor Grant Morgan have participated in contact at practice the last two weeks.

Cornerbacks Montaric Brown and Jerry Jacobs have both been dinged up. Brown is expected to be a game-time decision. Defensive end Dorian Gerald (ankle) has missed the last two games, and Pittman did not give a status update on him Thursday.

"They're coming up with perfect schemes for the weekend to kind of like dissect the defense," Newman said. "Sometimes our tempo is so fast they don't know how to react.

"They don't get in formations, so that leads to huge plays, and Matt's playing incredibly well. ... He's one of the toughest quarterbacks to stop in all of college football right now."

Pittman agreed, saying he sees comparisons between the Ole Miss offense and the Razorbacks' system installed by coordinator Kendal Briles, who was Kiffin's offensive coordinator at Florida Atlantic in 2017.

"They're very similar to us," Pittman said. "I mean, if you look at us it's a, 'Where's the ball?' And then there's a lot of different run routes across deep and then replace. You know, hoping your corner will go with the inside route and then replace that area.

"A lot of replacement routes, a lot of things where, 'Hey, I'm going to run you out of this zone and then I'm going to run somebody else in it.' That's basically passing football, but they seem to do it extremely well."

Corral passed for 246 yards and 2 touchdowns, completed 66.7% of his passes and rushed for 46 yards in a 31-17 win over the Razorbacks in Oxford, Miss., last season and he's taken a step up this year after an injury cost him the starting job to running quarterback John Rhys Plumlee in 2019.

"Their quarterback is dynamic, and he's a big threat running the football," Pittman said. "So, I mean, Coach [Barry] Odom [Arkansas' defensive coordinator] and his staff have a great plan. ... They're the real deal on offense, now, real deal."

Under Lebby, the long-time friend and brother-in-law of Briles, the Rebels are big adherents of the run-pass option, with Corral applying pressure with his decision-making, and a tempo that is faster than most hurry-up systems.

"We obviously have pace in our offense as well," Pittman said. "We know we're not going at lightning speed like Ole Miss is. Obviously we've talked to different people and they say it's as fast an offense as they've ever seen.

"So we're trying to simulate that at practice. Obviously it's very difficult because you're trying to get the correct blocking scheme, the correct routes, all those things at the same time they're going fast. We've been able to try to simulate some of that speed, obviously going good on good, but it's very difficult to do that against them. And I think that's a big advantage for their offense as well, on any team that they play." 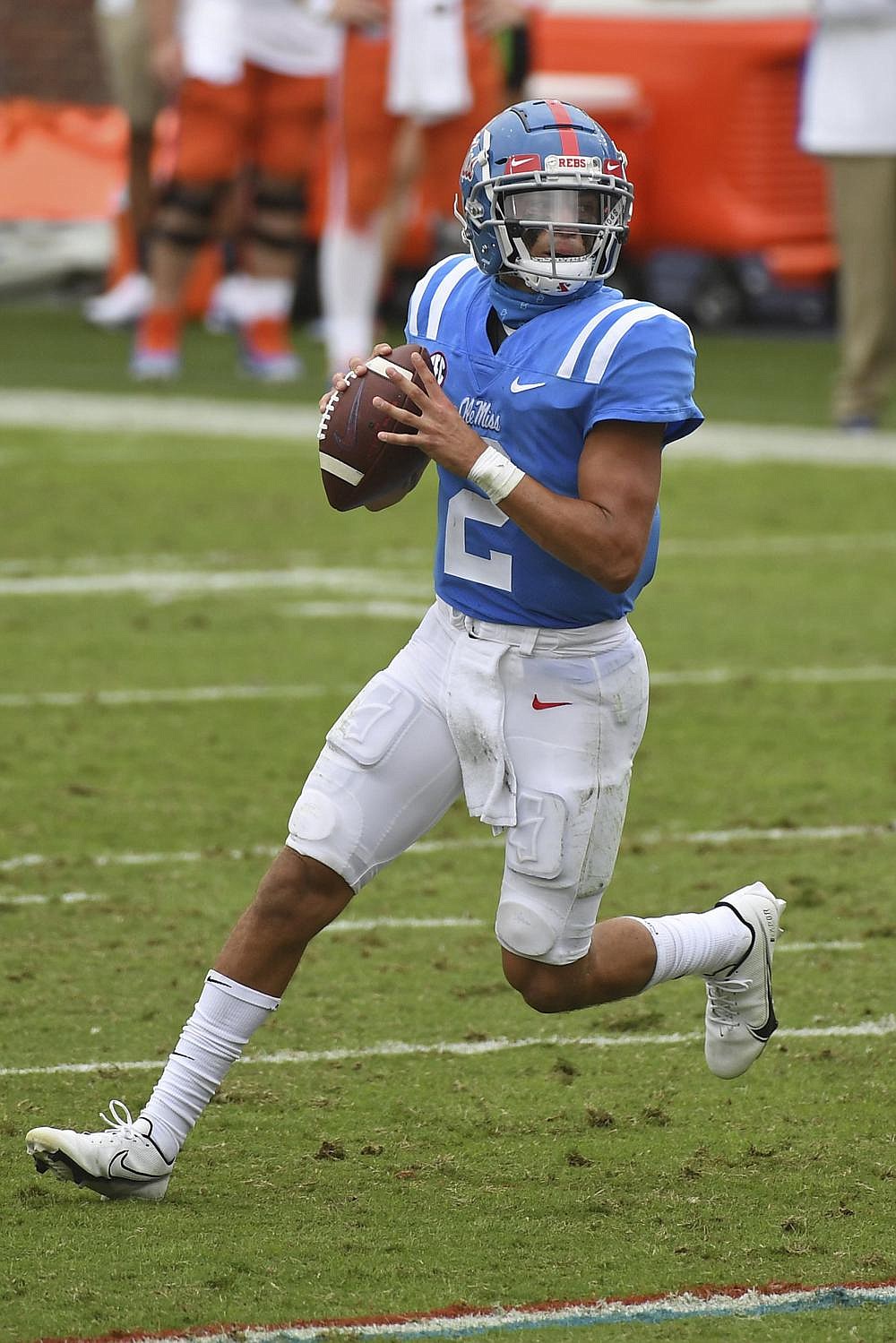 Under the leadership of sophomore quarterback Matt Corral, Ole Miss ranks second in the nation with 573 yards per game and 11th with 41.7 points per game. (AP/Thomas Graning)
ADVERTISEMENT