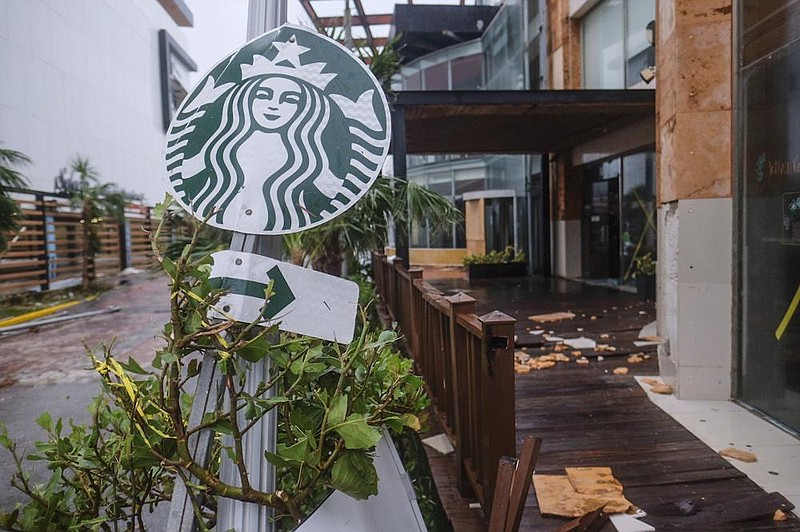 A Starbucks coffee shop sign was knocked over by winds from Hurricane Delta in Cancun, Mexico, in this file photo. The global coffee shop chain said Thursday that it plans to increase racial diversity in its workforce. (AP/Victor Ruiz Garcia)

SEATTLE -- Starbucks plans to significantly boost racial diversity among its workforce -- and it's making that goal a factor in the pay of its senior executives.

By 2025, the Seattle coffee giant wants minority-group representation in at least 30% of roles in corporate operations and 40% of retail and manufacturing roles, Chief Executive Officer Kevin Johnson told employees Wednesday. The goals, part of an ongoing effort to encourage diversity, reflect the company's obligation "to build bridges and create environments where all are welcome," Johnson said.

Starting in 2021, the compensation of Johnson and 42 other senior executives will be tied to the company's success at meeting those goals, although the company declined to offer details.

However, the company did say how far it must go to reach those goals.

Currently, 18.5% of its 43 top executives -- senior vice presidents and higher -- are minority-group members, the company said. In its retail operations, minority groups make up 23.5% of regional vice presidents, 27.1% of regional directors, and 34.9% of store managers.

By contrast, Starbucks has already reached its diversity goals in several categories. These include vice presidents (31.6% of whom are minority-group members), shift supervisors (44.3%) and baristas (48.5%).

Starbucks' willingness to publicly state its goals is laudable, said Ines Jurcevic, an assistant professor at the University of Washington Evans School of Public Policy & Governance and an expert in diversity management. Research has shown "making those goals public is necessary for being able to achieve them," Jurcevic said.

She also commended the company for publishing its current diversity numbers "because we don't know where [a company's] challenges are if we don't know what representation looks like to begin with."

Starbucks' announcement comes during a year of high-profile stories about diversity and corporate culture as businesses have confronted the Black Lives Matter movement and calls for racial justice in the wake of the police killing of George Floyd, a Black man, in Minneapolis.

Starbucks said it is also working to hire more Black and Hispanic people and retain them by making the company's culture more inclusive. That includes anti-bias training, better tools for tracking employees' career trajectories, and programs such as the mentoring of minority-group employees by senior executives.