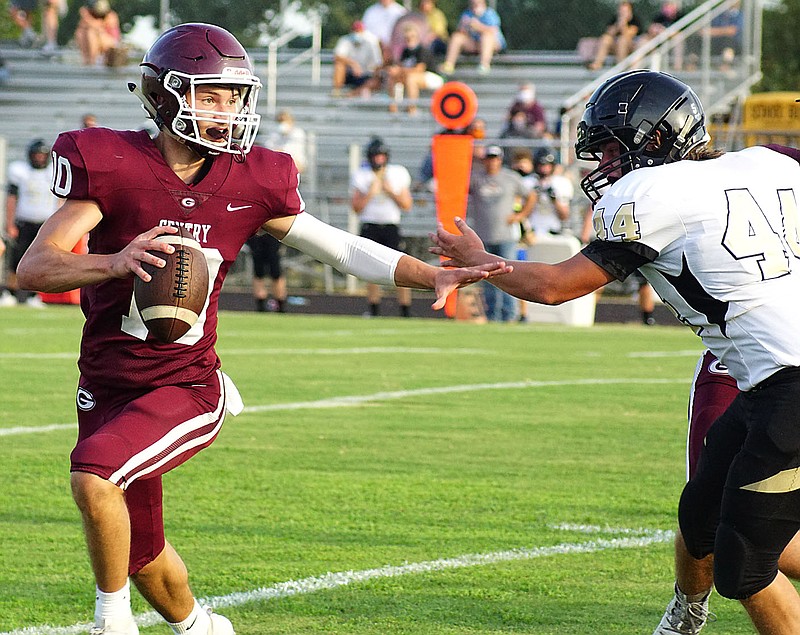 Gentry quarterback Zach Jarnagan is hopeful a successful senior season will lead to more offers to continue his football career in college. But Jarngan was forced to miss consecutive games because of contact tracing after being exposed to someone who tested positive for covid-19. Westside Eagle Observer/RANDY MOLL

Every game Zach Jarnagan plays for Gentry this year is another opportunity to impress college recruiters.

So, it was a blow to the senior Pioneers' quarterback when he was quarantined and forced to miss two games after someone he'd come in contact with tested positive for covid-19.

"I didn't think this whole covid thing was that serious at first," admits Jarnagan, who also missed the outdoor track and field season at Gentry after team sports in Arkansas was shut down last March. "But that changed when my buddy's mom tested positive and I had to miss the second and third games my senior year. I remember thinking 'wow, this is really serious.'"

A Gallup poll conducted in 2010 revealed that 61 percent of adults who responded viewed high school as a "great time" in their lives, including 7 percent who rated it as "the best time" in their lives. But a worldwide pandemic that's killed over 210,00 people in American is hell-bent on destroying that comfort, especially for high school seniors who are athletes, cheerleaders, and band and drill team members.

Over 60 high school football games in Arkansas have been canceled since the start of the season, including more than a dozen last week. Some school officials have hastily arranged to find replacement games. Many have not.

"It's tough on a coach and his staff that had been preparing since Sunday to play Little Rock Central at home to get a call from the athletic director on Wednesday night, saying you're going to Fayetteville instead," said Michael Beaumont, the Athletic Director of Fort Smith Public Schools. "It wrecks your travel budget when you've got to go Texarkana or Moore, Okla., for games that weren't on your (original) schedule. But, hey, we do it for the kids and at least they're still playing."

Farmington was eager to be playing again at Vilonia last week after its scheduled home game with Harrison the previous week was canceled because of covid-19 concerns. But preparing for road games presents new challenges for teams on and off the field.

"It is extremely difficult to build any offensive continuity when you can't work with the same group of guys every day, particularly in the offensive line," Farmington coach Mike Adams, who has more than 200 career wins, said. "Due to a combination of injuries and quarantines we played four different combinations of linemen in our first four games. Covid has also made it difficult to travel. We have always taken everybody to every game, but this year we have been forced to cut down to a travel squad of 40 guys. Even at that reduced number, there are no restaurants that can handle 55 people at once. So we have to order takeout food and either eat it on the bus or at a rest stop."

In southeast Arkansas, Crossett was about two hours away from playing a Thursday night game last week at DeWitt when the call was made to cancel the game because of covid-19 concerns. That left both teams without games and resulted in lost revenue for the home team, DeWitt school officials said.

Many of the top seniors in Arkansas already have scholarship offers to continue their careers in college, like Dreyden Norwood of Northside, Cole Joyce of Bentonville, and Errington McRae of Springdale Har-Ber. Junior standout Isaiah Sategna of Fayetteville, who recently received an offer from Oregon, will also continue to pile up offers even if he doesn't play another down this season. But it's those hopefuls who mostly attract offers from Division II and Division III schools and junior colleges that makes exposure by playing in games essential.

Jarnagan has played well since his return for Gentry (3-2, 2-0 4A-1 Conference), which has won consecutive games heading into tonight's week's 4A-1 Conference game at Shiloh Christian. He's being evaluated by at least one Division II school in Arkansas and he's hopeful for more interest as the season continues or, more accurately, assuming the season continues, he said.

Football is not the only sport to feel the sting of having games wiped off the schedule. The 6A-West in volleyball decided on a postseason tournament for the first time ever after several matches were canceled because of covid-19 concerns. Springdale Har-Ber was hit particularly hard and the Lady Wildcats went from Sept. 10 to Oct. 8 without playing a match.

"We had 16 girls in quarantine at one point," Har-Ber coach Cassie Loyd said. "We were in the open gym practicing on a Sunday preparing for a Tuesday game, then we get the call with more bad news. It's been really hard on the girls."

Athletic directors and booster club members have been creative in trying to generate revenue and overcome restrictions with reduced seating capacity at games and sales at concession stands because of guidelines first introduced by Arkansas Gov. Asa Hutchinson and the Arkansas Department of Health. Stadiums may not exceed 66 percent capacity and tickets must be purchased online instead of being sold at the gate.

Coaches and athletic directors have been working the phones to find opponents when games have had to be canceled.

Fayetteville hastily arranged a home game two weeks ago with Fort Smith Northside, which prevented the Bulldogs from going three weeks without playing.

"The pandemic has brought drastic changes to all operations and procedures to our athletic programs," Fayetteville Athletic Director Steve Janski said. "We have seen a significant drop in gate revenue, which supplements all of our athletic programs. We are running a very tight budget but with the help of community sponsors, we hope to maintain a baseline level of operations."

Under normal circumstances, a Northside vs. Southside game would've filled the stadium for the annual "Battle of Rogers Avenue" in Fort Smith. But Mayo-Thompson Stadium was less than half full for the Aug. 27 season-opener with the new restrictions and only a handful of fans showed up when the school district showed a live-stream of the game on the scoreboard at Southside.

Under covid-19 protocols, fans have to purchase tickets online for a limited amount of seats and band and drill teams can perform at home games, but not away games. Areas in the stands are generally marked or blocked off to ensure social distancing, and some stadiums have added chair seating in the end zones.

"Obviously, the covid guidelines of 66 percent capacity, the reality is 33% for skipping rows will affect paid attendance and concessions," said Keith Kilgore, Athletic Director the Rogers School District said. "The bigger picture is having the opportunity for our student-athletes to compete. Due to covid guidelines, the most difficult challenge has been enforcing the covid-19 guidelines of wearing masks and the separation of non-immediate family members. We had to hire additional staffing to make sure those guidelines are met in every venue. This season we have had to cancel several contests in different sports due to positive covid-19 cases or personal close contact that were difficult but the right decision.

"Student and staff safety will always be our priority. Overall, our school community and patrons understand the importance of following the guidelines so we can continue to play this season."

The pandemic has changed even the way booster club members raise money, primarily through concession stand sales and events that benefit their programs.

"We're working around it and doing the best we can," said Brian Jackson, Booster Cub president at Rogers Heritage. "One thing, here at Rogers Heritage, we're taking hamburgers and hot dogs out of the concession stand and sell them outside in an open-air pavilion, where there's more social distancing and masking. As far as fundraising, with the fact we can't gather in big groups of people, we've tried to personalize the process and send letters to our supporters.

"It's been a challenge but all we can do is put our head down and press forward."