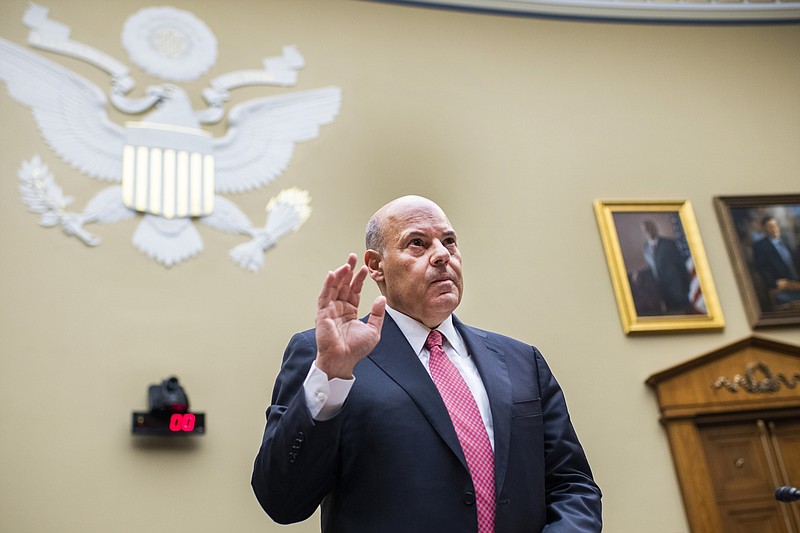 FILE - In this Monday, Aug. 24, 2020, file photo, Postmaster General Louis DeJoy is sworn in before testifying during a House Oversight and Reform Committee hearing on the Postal Service on Capitol Hill in Washington. The U.S. Postal Service agreed Wednesday, Oct. 14, to reverse changes that slowed mail service nationwide, settling a lawsuit filed by Montana Gov. Steve Bullock during a pandemic that is expected to force many more people to vote by mail. (Tom Williams/Pool Photo via AP, File)

HELENA, Mont. -- The Postal Service agreed Wednesday to reverse changes that slowed mail service nationwide, settling a lawsuit filed by Montana Gov. Steve Bullock during a pandemic that is expected to force many more people to vote by mail.

Separately, The Washington Post reported Thursday that Postal Service employees and supervisors have routinely falsified data on package deliveries, according to postal workers and internal data obtained by the Post. And the practice appears to have intensified as Americans ordered more items online during the coronavirus pandemic.

The Montana lawsuit filed against Postmaster General Louis DeJoy and the Postal Service on Sept. 9 argued changes implemented in June harmed access to mail services in Montana, resulting in delayed delivery of medical prescriptions, payments, and job applications, and impeding the ability of Montana residents to vote by mail.

The Postal Service agreed to reverse all changes, which included reduced retail hours, removal of collection boxes and mail-sorting machines, closure or consolidation of mail-processing facilities, restriction of late or extra trips for timely mail delivery, and banning or restricting overtime.

The settlement agreement was reached a day ahead of a hearing in the U.S. District Court in Great Falls, Mont. It applies to all states.

"Montanans never gave up this fight and as a result, we are ensuring stability through and beyond the election by immediately restoring the mail services folks rely on, whether it's receiving vital medication or ensuring they can pay their bills on time," Bullock said in a statement.

Many more voters are expected to vote by mail this November to limit the spread of the coronavirus pandemic. The majority of Montana counties are holding elections by mail, after a directive by Bullock permitted them to do so. Bullock is running for a seat in the U.S. Senate.

"The Postal Service was willing to resolve this matter because it has always been our goal to ensure that anyone who chooses to utilize the mail to vote can do so successfully," said Postal Service spokesperson David Rupert in a statement. "This settlement underscores our unwavering commitment to that principle and to our important role in the nation's electoral process."

Meanwhile, a Washington Post examination of Postal Service data and interviews with nearly a dozen current and former employees showed that workers scanned millions of packages with incorrect delivery-designation codes -- claiming that a customer's driveway was blocked or that the recipient was not home, for example, when in fact the package never left the post office.

The Post reported in August that customers nationwide were being erroneously notified that their packages had been held at the post office at their own request. Newly obtained data, and interviews with two former postal executives and nine current postal workers, shows that the false codes are far more varied and extensive, and suggest that they are meant to boost the agency's performance metrics.

Postal workers said in interviews that they have been pressured by their bosses to perform false scans increasingly over the past six months so that late packages appear to have been delivered -- or are delayed because of issues at the delivery address -- to ensure they don't count against the agency's delivery statistics.

Postal Service spokesman David Partenheimer said in a statement that the agency maintains "end to end visibility" of its packages as they are accepted, processed and delivered, and that it takes "improper package processing very seriously."

"We are committed to making sure all packages are properly delivered for our customers," Partenheimer wrote.

Information for this article was contributed by Iris Samuels of The Associated Press; and by Julie Zauzmer and Jacob Bogage of The Washington Post. Samuels is a corps member for the Associated Press/Report for America Statehouse News Initiative. Report for America is a nonprofit national service program that places journalists in local newsrooms to report on undercovered issues.