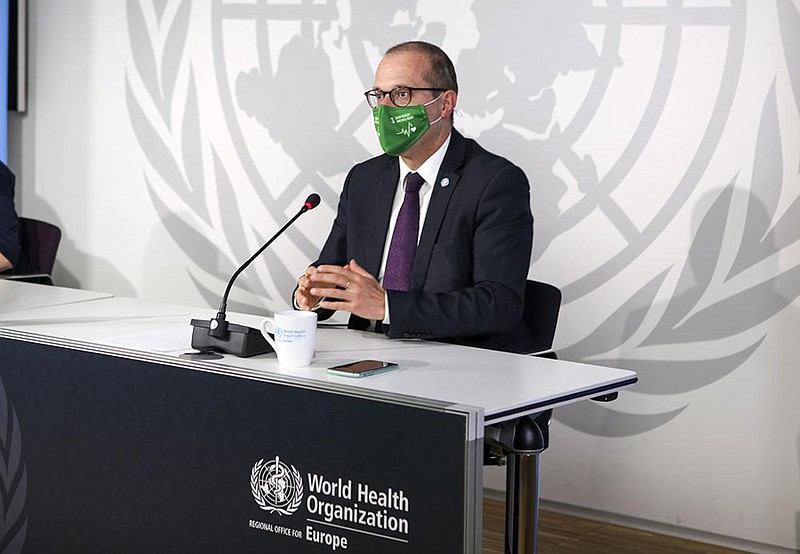 Dr. Hans Kluge, head of the World Health Organization’s Europe office, urged governments to be “uncompromising” in controlling the spread of the coronavirus during a virtual news conference Thursday in Copenhagen, Denmark. Kluge warned that even more drastic steps might be needed in such “unprecedented times.” More photos at arkansasonline.com/1016virus/. (AP//World Health Organization/David Barrett)

Coronavirus cases around the world have climbed to all-time highs of more than 330,000 per day as the scourge comes storming back across Europe and spreads with renewed speed in the U.S., forcing many places to reimpose tough restrictions eased just months ago.

Well after Europe seemed to have largely tamed the virus that proved so lethal last spring, newly confirmed infections are reaching unprecedented levels in Germany, the Czech Republic, Italy and Poland. Most of the rest of the continent is seeing similar danger signs.

In the United States, new cases per day are on the rise in 44 states, with many of the biggest surges in the Midwest and Great Plains, where resistance to masks and other precautions has been running high and the virus has often been seen as just a big-city problem. Deaths per day are climbing in 30 states.

"I see this as one of the toughest times in the epidemic," said Dr. Peter Hotez, an infectious-disease specialist at the Baylor College of Medicine in Texas. "The numbers are going up pretty rapidly. We're going to see a pretty large epidemic across the Northern Hemisphere."

"Everyone has this traditional, emotional, warm feeling about the holidays and bringing a group of people, friends and family, together in the house indoors," he said on ABC's "Good Morning America." "We really have to be careful this time that each individual family evaluates the risk-benefit of doing that."

"It is unfortunate because that's such a sacred part of American tradition, the family gathering around Thanksgiving," Fauci said. "You may have to bite the bullet and sacrifice that social gathering."

The Centers for Disease Control and Prevention offered advice similar to Fauci's.

This week, the CDC said people at elevated risk of a severe covid-19 illness -- older people and those with chronic conditions -- "should not attend in-person holiday celebrations."

CDC Director Robert Redfield said this week in a conference call with governors that Thanksgiving celebrations could spark high viral transmission rates, according to a recording obtained by CNN. "What we're seeing as the increasing threat right now is actually acquisition of infection through small household gatherings," Redfield said.

[Video not showing up above? Click here to view » https://www.youtube.com/watch?v=O2lRBuKjQwA]

In his ABC interview, Fauci also criticized a declaration by a group of scientists that supports the concept of "herd immunity."

Fauci says backing herd immunity -- the idea that a disease will stop spreading once nearly everybody has contracted it -- is "total nonsense."

"If you talk to anybody who has any experience in epidemiology and infectious diseases, they will tell you that that is risky and you'll wind up with many more infections of vulnerable people, which will lead to hospitalizations and death," he said. "So I think that we've just got to look that square in the eye and say it's nonsense."

"Inevitably, we're moving into a phase where there's going to need to be restrictions again," said David Rubin, director of PolicyLab at Children's Hospital of Philadelphia.

For the first time since early August, the number of newly reported coronavirus infections in the United States on Thursday topped 60,000. More than 36,000 people are hospitalized nationally with covid-19, the disease caused by the virus, amid a long-feared autumnal rise of infections and serious illnesses.

Responses to the fall surge have varied in hard-hit states.

In North Dakota, Republican Gov. Doug Burgum raised the coronavirus risk level in 16 counties this week but issued no mandated restrictions. In Wisconsin, a judge temporarily blocked an order from Democratic Gov. Tony Evers that would limit the number of people in bars and restaurants.

South Dakota on Wednesday broke its record for covid-19 hospitalizations and new cases and has had more deaths from the disease less than halfway through October than in any other full month.

Despite the grim figures, GOP Gov. Kristi Noem has resisted pressure to step up the state's response to the disease.

Wisconsin hit a new daily high for confirmed infections for the second time this week. In Missouri, the number of people hospitalized with covid-19 reached nearly 1,450, another record.

"We know that this is going to get worse before it gets better," Wisconsin Department of Health Services secretary-designee Andrea Palm said at a briefing Thursday. "Stay home. Wear a mask. Stay 6 feet apart. Wash your hands frequently."

"Early on in this pandemic, it was felt that this was a big-city problem, and now this is stretching out into the rural communities where I think there has not been as much emphasis on masking and distancing," he said.

The reopening of many schools and colleges did not immediately lead to a major spike in cases, as some experts had feared, but the numbers have steadily crept upward.

Worldwide, deaths have fallen slightly in recent weeks to about 5,200 a day, down from a peak of around 7,000 in April.

Dr. Hans Kluge, the head of the World Health Organization's Europe office, urged governments to be "uncompromising" in controlling the virus. He said most of the spread is happening because people aren't complying with the safety rules.

In France, which reported over 22,000 new infections Wednesday, President Emmanuel Macron put 18 million residents in nine regions, including Paris, under a curfew starting Saturday. The country will deploy 12,000 police officers to enforce it.

Italy set a one-day record for infections and recorded the highest daily death toll of this second wave, adding 83 victims to bring its count to nearly 36,400, the second-highest in Europe after Britain.

In Britain, London and seven other areas face restrictions that will mean more than 11 million people will be barred from meeting with anyone indoors from outside their households and will be asked to minimize travel starting this weekend.

European nations have seen nearly 230,000 confirmed deaths from the virus.

Kluge warned that even more drastic restrictive measures might be needed in such "unprecedented times."

"These measures are meant to keep us all ahead of the curve and to flatten its course," Kluge said, while wearing a dark-green mask. "It is therefore up to us to accept them while they are still relatively easy to follow instead of following the path of severity."

So far in the new surges, deaths have not increased at the same pace as infections.

For one thing, it can take time for people to get sick and die of the virus. Also, many of the new cases involve young people, who are less likely than older ones to get seriously ill. Patients are benefiting from new drugs and other improvements in treating covid-19. And nursing homes, which were ravaged by the virus last spring, have gotten better at controlling infections.

But experts fear it is only a matter of time before deaths start rising in step with infections.

"All of this does not bode well," said Josh Michaud, associate director of global health policy with the Kaiser Family Foundation in Washington. "Rapid increases in cases like we're seeing now are always followed by increases in hospitalizations and deaths, which is what is likely to occur across much of Europe and the U.S. in the coming weeks and months."

Separately, the World Health Organization's chief scientist said Wednesday that young, healthy people should be prepared to wait more than a year to be vaccinated against the virus.

Many people are under the misconception that they'll be able to get a vaccine in early 2021, "and then things will be back to normal," Soumya Swaminathan said in a question-and-answer session broadcast on YouTube.

In reality, she said, any vaccine that is ready next year will be available in limited quantities, with health care workers and others on the front lines having first priority, followed by "the elderly and so on."

"There will be a lot of guidance coming out, but I think an average person, a healthy young person, might have to wait until 2022 to get a vaccine," she predicted.

With an unprecedented global demand for a vaccine, governments will have to work so that people most at risk get immunized first. By 2022, it is hoped that mortality rates will have dropped and the most vulnerable people will be protected, Swaminathan said Thursday.

The United States has not joined the program, meaning that the U.S. timeline for vaccine distribution may differ from the one laid out by the WHO.

The CDC also said that a covid-19 vaccine may not be recommended for children when it first becomes available in the United States because the vaccine has not been tested on them.

Information for this article was contributed by David Crary, Carla K. Johnson, Maria Cheng, Samuel Petrequin and Geir Moulson of The Associated Press; and by Joel Achenbach, Jacqueline Dupree, Antonia Noori Farzan and Adam Taylor of The Washington Post. 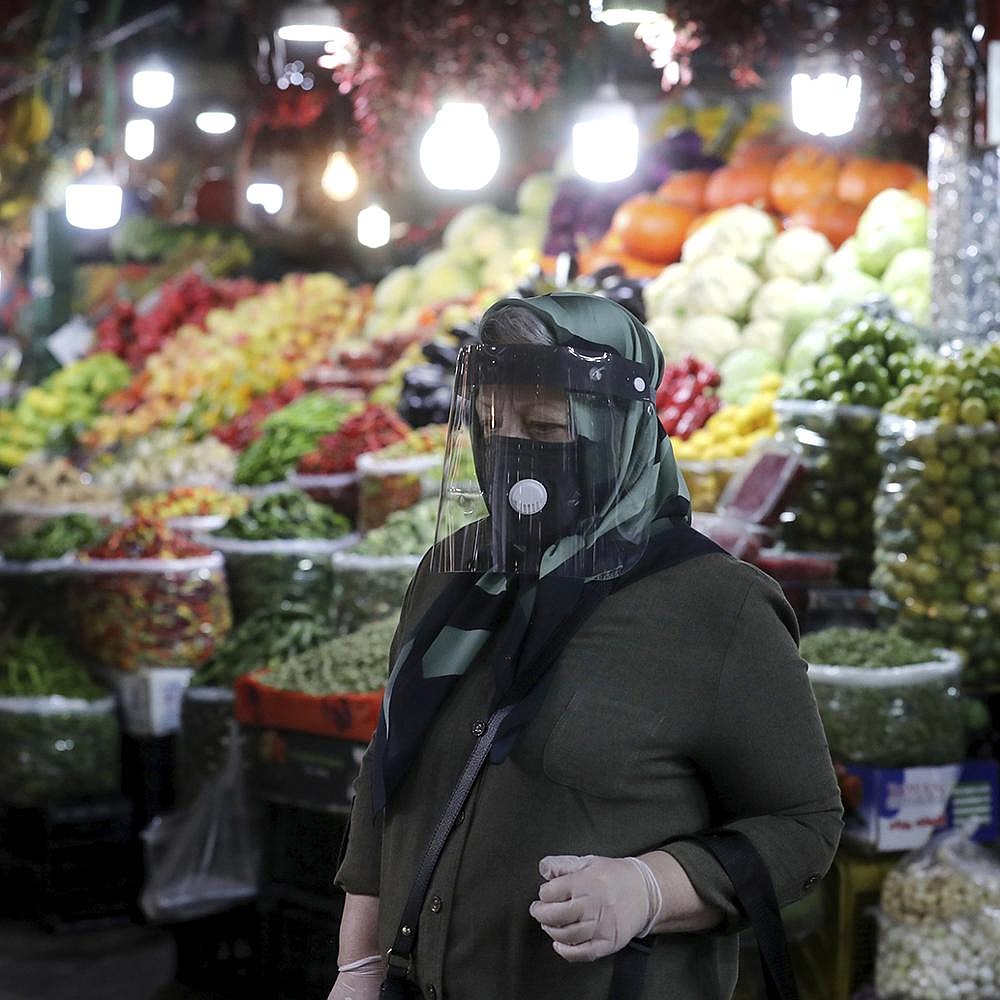 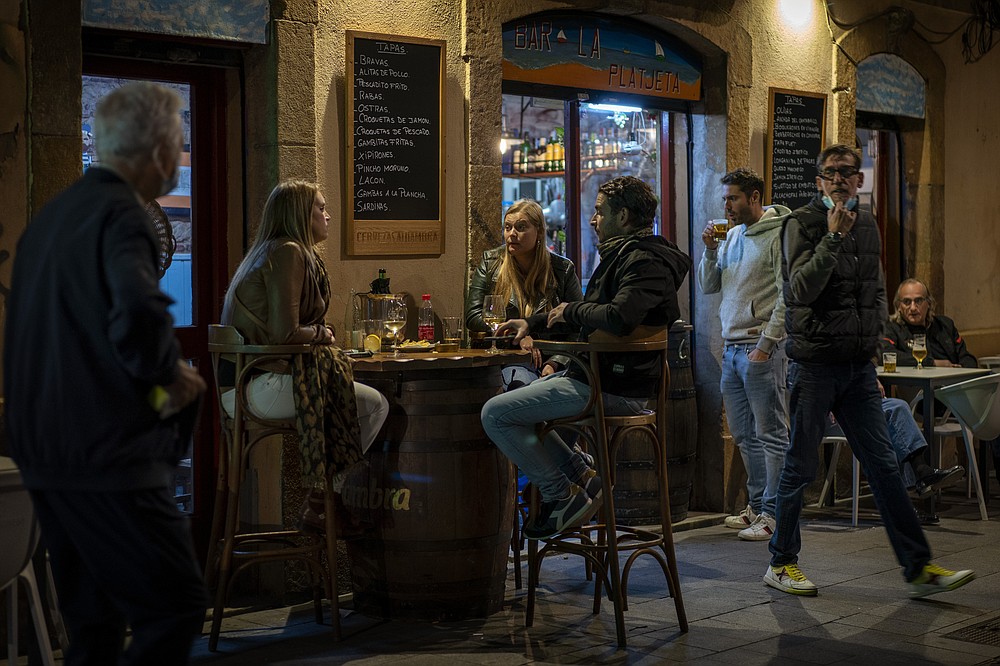 Customers sit outside a bar in Barcelona, Spain, Thursday Oct. 15, 2020. Authorities in northeastern Spain ordered shut all bars and restaurants for two weeks as part of fresh restrictions against the spread of the new coronavirus. (AP Photo/Emilio Morenatti) 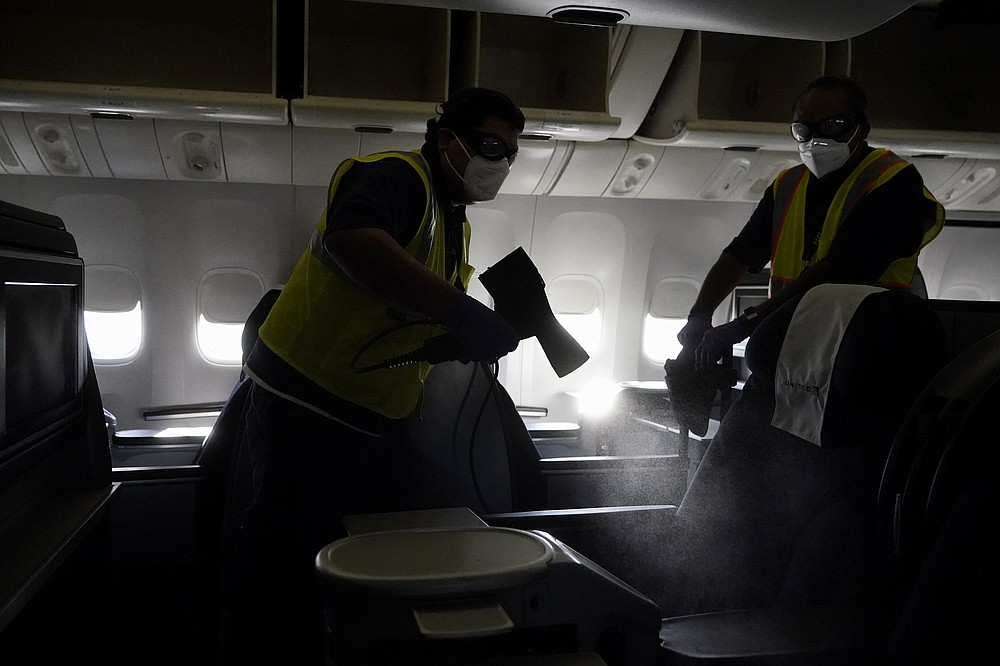 Workers with ABM Industries give a demostration on cleaning inside a United Airlines plane destined for Hawaii at San Francisco International Airport in San Francisco, Thursday, Oct. 15, 2020. Coronavirus weary residents and struggling business owners in Hawaii will be watching closely as tourists begin to return to the islands on Thursday without having to self-quarantine upon arrival. (AP Photo/Jeff Chiu) 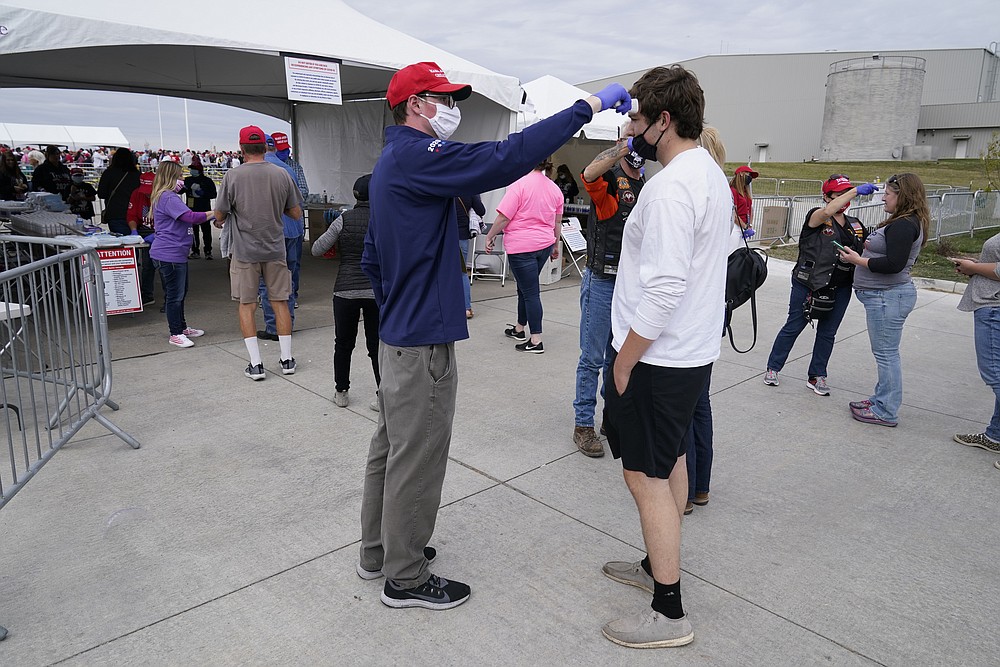 A volunteer takes the temperature of supporters before the arrival of President Donald Trump an airport rally, Wednesday, Oct. 14, 2020, in Des Moines, Iowa. (AP Photo/Charlie Neibergall) 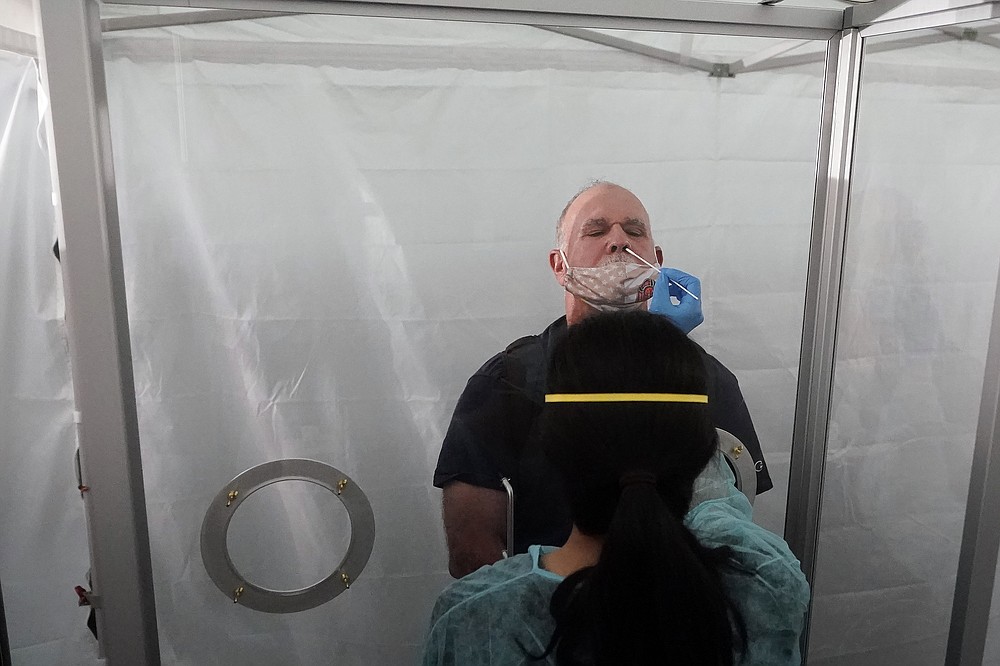 Jim Zoller, top, gets a rapid COVID-19 test from June Lopez, Dignity GoHealth medical assistant, before a United Airlines flight to Hawaii at San Francisco International Airport in San Francisco, Thursday, Oct. 15, 2020. Coronavirus weary residents and struggling business owners in Hawaii will be watching closely as tourists begin to return to the islands on Thursday without having to self-quarantine upon arrival. (AP Photo/Jeff Chiu) 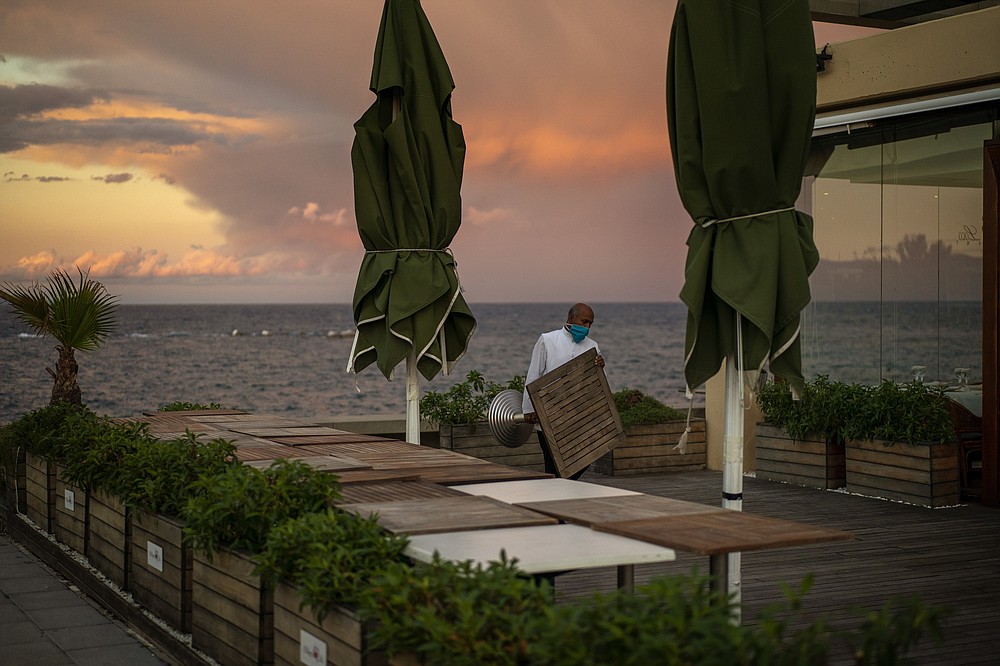 A waiter removes tables outside a restaurant in Barcelona, Spain, Thursday Oct. 15, 2020. Authorities in northeastern Spain ordered shut all bars and restaurants for two weeks as part of fresh restrictions against the spread of the new coronavirus. (AP Photo/Emilio Morenatti) 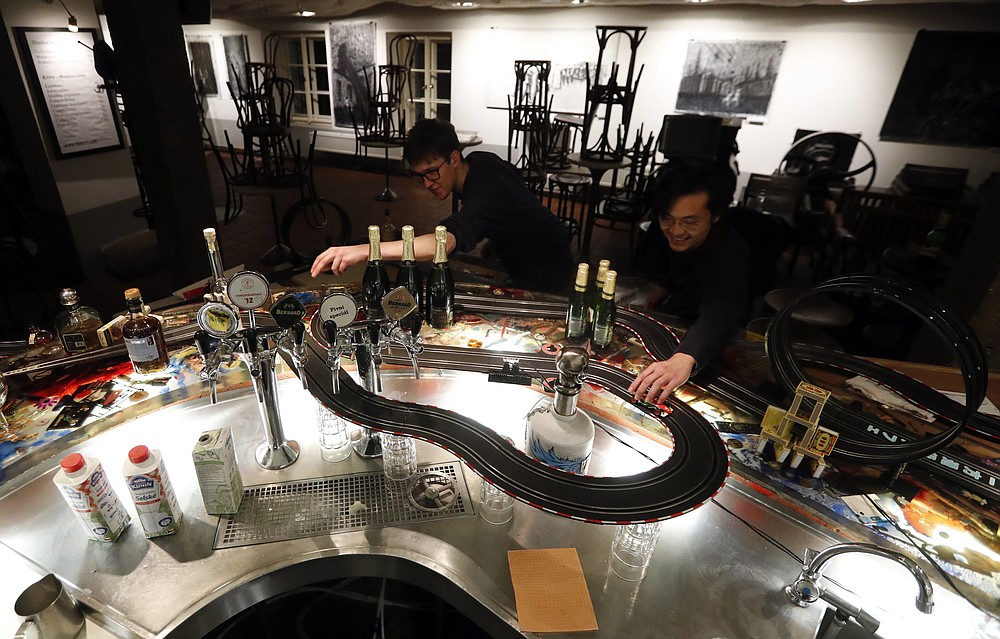 Staff members enjoy their time with a slot car track set up in a bar in Prague, Czech Republic, Thursday, Oct. 15, 2020. Coronavirus infections in the Czech Republic have hit a new record high, surpassing 9,000 confirmed cases in one day for the first time. As part of new restrictive measures interiors of all bars, coffees and restaurants are closed for customers, who can only be served for takeaway. (AP Photo/Petr David Josek) 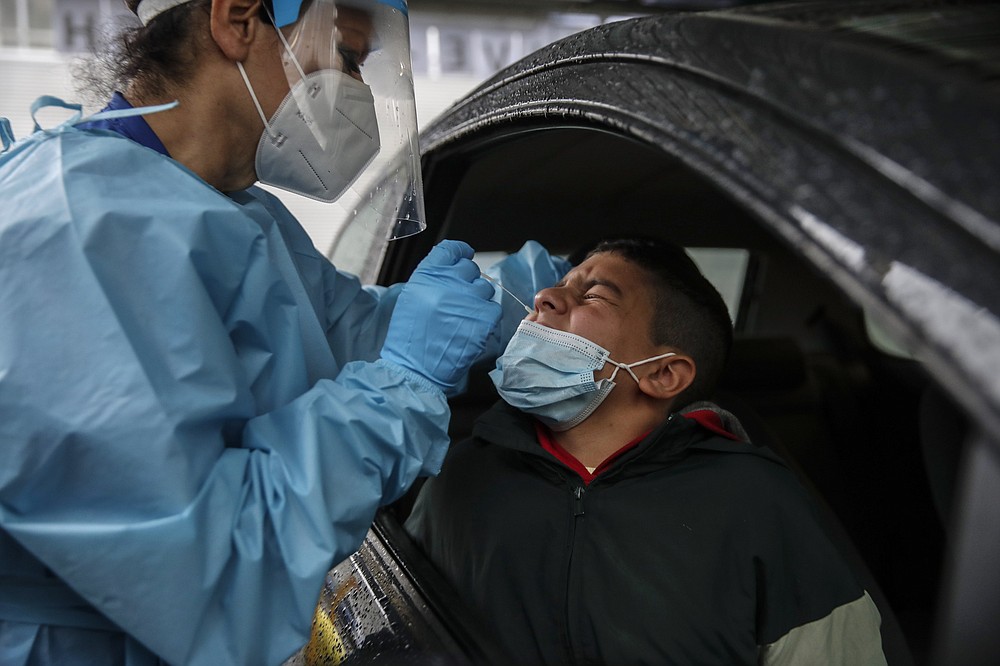 Medical staff takes a swabs as she tests a boy for COVID-19 at a drive-through at the San Paolo hospital, in Milan, Italy, Thursday, Oct. 15, 2020. Coronavirus infections are surging again in the region of northern Italy where the pandemic first took hold in Europe, renewing pressure on hospitals and health care workers. (AP Photo/Luca Bruno) 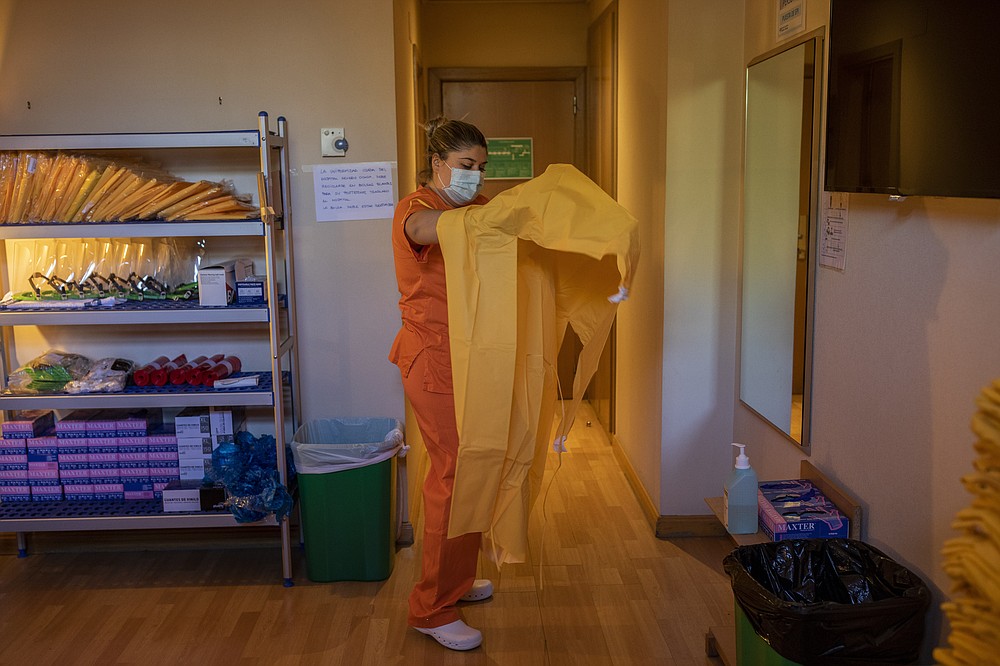 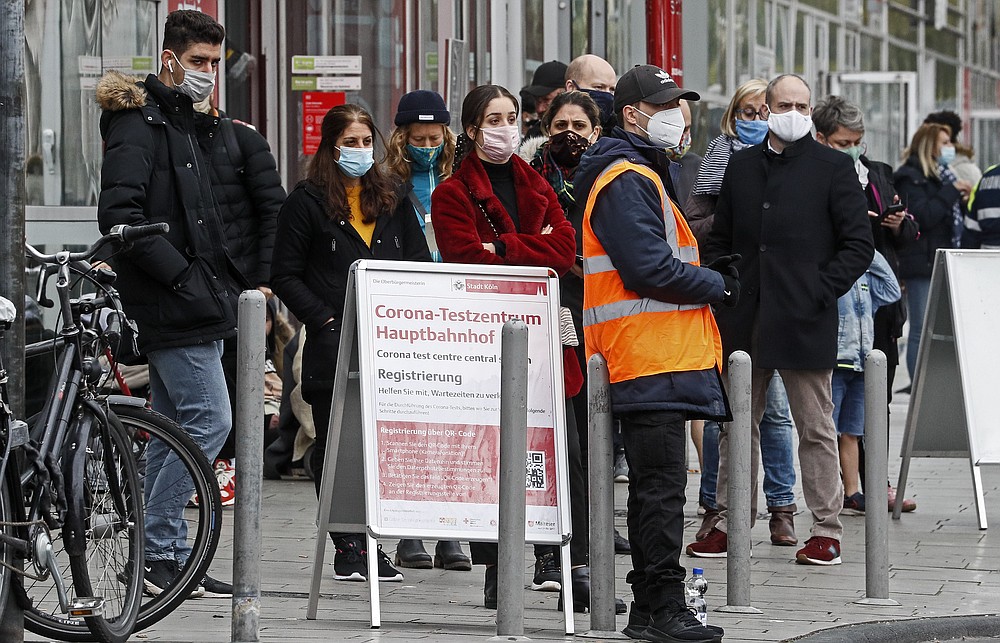