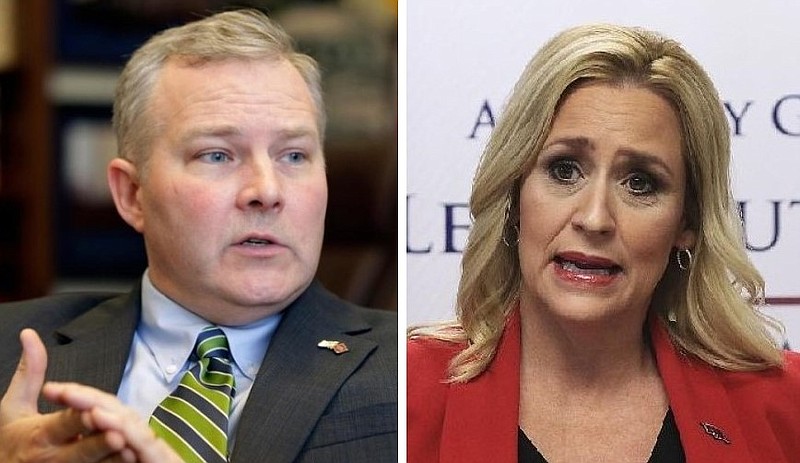 Lt. Gov. Tim Griffin collected nearly $895,000 in contributions in the past quarter for his 2022 gubernatorial campaign, trailed by announced rival Attorney General Leslie Rutledge, who raised more than $838,000 in the same period, according to their campaign finance reports filed Thursday.

In August 2019, Griffin confirmed his plan to run for the GOP nomination for governor in 2022.

He started fundraising in the first two weeks of March before the coronavirus pandemic hit. Griffin said he then hit the pause button until May 1.

Rutledge formally announced her bid for the Republican nomination for governor on July 1, the first day of the quarter that ended Sept. 30.

“Over the last several years, I have received encouragement from across the State to use my experience as Attorney General to run and become the first female Governor of Arkansas,” Rutledge said in a written statement. “I am beyond humbled by the outpouring of support from so many Arkansans representing all corners of our State. My campaign is more energized than ever as we are committed to Make Arkansas First.”

Griffin said he’s “humbled and honored by the historic, record-breaking outpouring of support for our campaign for governor, especially during such uncertain and challenging times.

“Arkansans want a bold conservative with the experience to lead, and I am ready,” he said in a written statement. “I will continue to demand the best for Arkansas, so that our kids and grandkids can live, work and raise their families right here at home.”

In addition to Griffin and Rutledge, Senate President Pro Tempore Jim Hendren, R-Sulphur Springs, and a former press secretary for President Donald Trump, Sarah Huckabee Sanders of Little Rock, have said they are considering running for governor in 2022.

Hendren’s uncle is Republican Gov. Asa Hutchinson, who has served as the state’s chief executive since 2015 and is barred by term limits law from seeking re-election in 2022.

Sanders’ father is former Republican Gov. Mike Huckabee, who was the state’s chief executive from 1996-2007.

So far, the only announced candidate for lieutenant governor in 2022 is state Sen. Jason Rapert, R-Conway.

State Sen. Jonathan Dismang, R-Searcy, is among those considering running for the GOP nomination for lieutenant governor in the 2022 primary election.

No Democrats have publicly signaled an interest in running for governor or lieutenant governor yet in 2022.