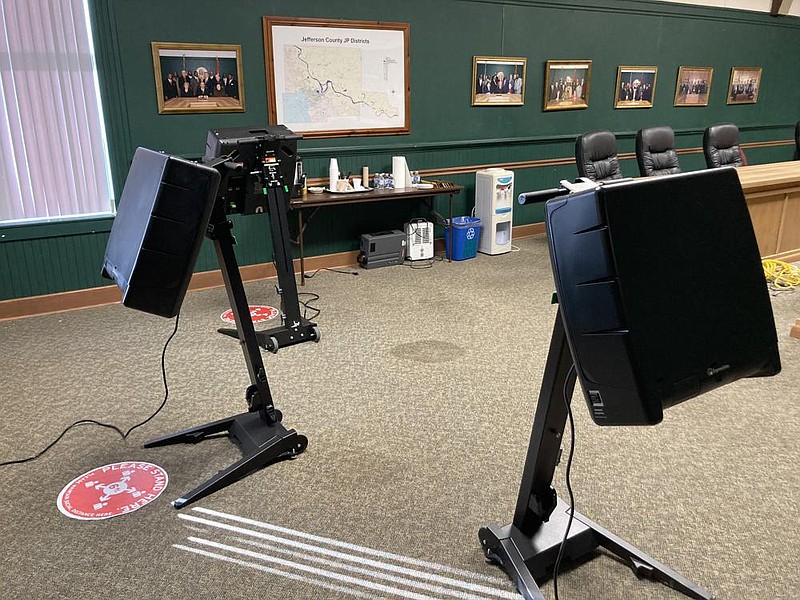 Early voting in Jefferson County starts Monday. Early turnout has been heavy in several other parts of the country. (Pine Bluff Commercial/Byron Tate)

Starting Monday, early voting begins, and the buzz around the Jefferson County Courthouse on Friday was the expected onslaught of voters who will be making their way that day to cast their ballots at the Courthouse.

That is based in part on what people are talking about, according to officials, but also based on the early-voting turnout around the country.

At the courthouse, voting machines were at the ready in both the Quorum Court chambers as well as the voting area across the hall.

Specific days and times for early voting are as follows:

The clerk's office also reminds voters of other election-related dates:

• Oct. 30 -- Last day for a voter to transfer into Jefferson County.

According to the public notice of elections printed in the Commercial on Oct. 11, candidates in contested races include:

Election information is available at the Jefferson County clerk's office, (870) 541-5322; University of Arkansas Division of Agriculture ballot guide, www.uaex.edu/ballot or the Secretary of State's office, www.sos.arkansas.gov/elections/voter-information/absentee-voting.