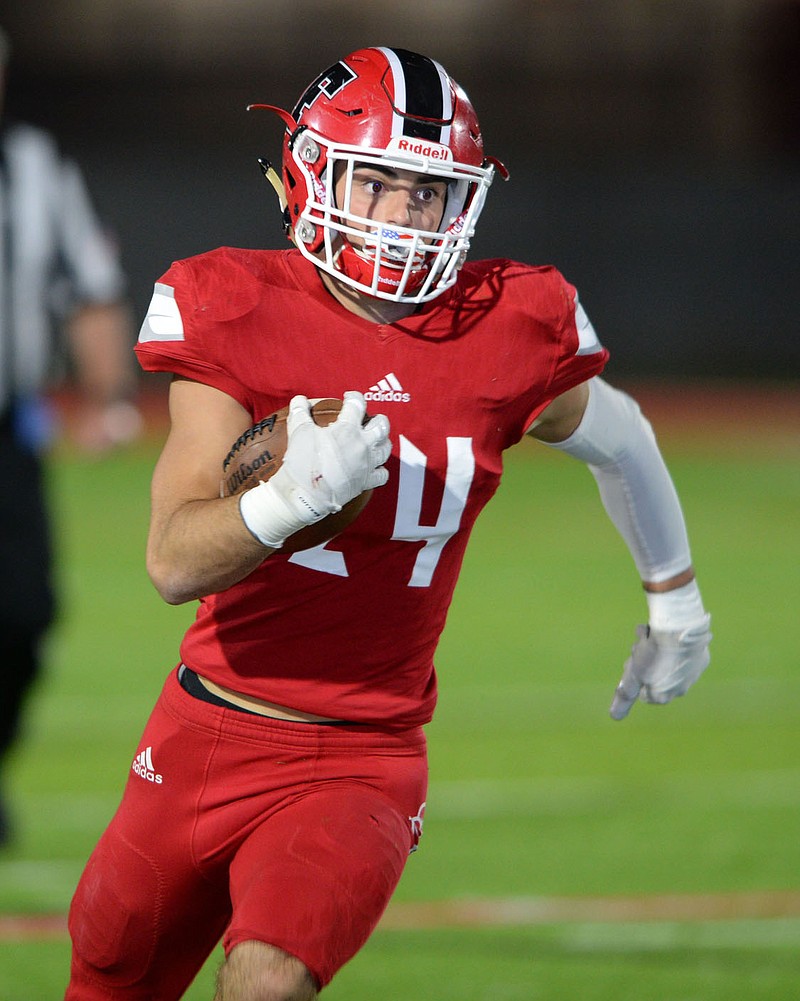 Farmington running back Caden Elsik (24) carries the ball Friday, Oct. 16, 2020, through the Clarksville defense during the first half of play at Cardinal Stadium in Farmington. Visit nwaonline.com/201017Daily/ for today's photo gallery. (NWA Democrat-Gazette/Andy Shupe)

FARMINGTON -- Farmington junior Caden Elsik was more than a handful for Clarksville on Friday night, chopping up yardage and touchdowns, on the ground and through the air, to lead the Cardinals' to a 29-21 5A-West Conference victory.

Elsik scored five times -- including a successful 2-point conversion reception -- rushing for three touchdowns and hauling in a 67-yard pass for another.

He finished with 212 yards from scrimmage, including 144 rushing on 16 carries.

"My offensive line did a really good job, opening some big holes," Elsik said. "We ran a lot of power plays and that's pretty much our go-to."

Farmington (3-2, 1-2) only ran 29 plays in the game to the 57 plays churned out by Clarksville's single-wing attack

"It was a game we had to win, and we knew going in it was going to be tough -- the stuff Clarksville does on offense is hard to handle," Farmington coach Mike Adams said. "We were able to move the ball consistently all night long. I was really proud with how well our offensive line did, then we got a couple of stops on defense and that was the key."

Clarksville (2-3, 1-3) opened the game with a methodical 11-play drive, converting two fourth-down plays, to take a 7-0 lead midway through the first quarter. Arthur Alvarez finished the drive with a 21-yard scamper. Alvarez ended up with 123 yards on 26 carries.

Farmington wasted little time in returning the favor, as quarterback Tate Sutton hooked up with Elsik, who got behind the Panther defense for the 67-yard scoring catch on the Cardinals' first play from scrimmage.

"Tate threw a really good ball," Elsik said. "I just kind of led the defender inside, then turned my shoulder and caught it outside. Then I just took off from there."

A 12-play Panther drive was halted when they failed to convert on fourth down at the Farmington 38. Elsik then broke off runs of 16 and 29 yards, finishing with a 1-yard blast to put the Cardinals up 14-7.

Clarksville knotted the score 14-14 midway through the second quarter, thanks to a razzle-dazzle double-reverse pass that ended up in Alvarez's hands for a 53-yard gain to the Farmington 15-yard line. Three plays later, Jaylin Wright scored on a 4-yard run.

Farmington's Terrion Swift recovered a Panther fumble at midfield early in the second half. From there, Sutton hit Chase Brown for 45 yards to the Clarksville 5. Elsik finished off a play later.

The Panthers then moved the ball to the Cardinal 1, on the verge tying things again. But they fumbled the ball into the end zone where Cecory Thomas pounced on it for Farmington.

The Cardinals then mounted a nine-play drive to stretch the lead. The key play was a fourth-down run by Elsik, who appeared to get caught behind the line, only to reverse field for a 10-yard gain and a first down. He then finished the drive with an 8-yard touchdown jaunt.

"When Caden stays patient and reads those blocks well, he's hard to stop," Adams said of his workhorse. "He's such an explosive, strong kid with some speed, so that's a good combination to have."

Clarksville fumbled the ball into the end zone once again, late in the game. But this time Panther Easton Case fell on it for a touchdown.

The Cardinals were able to thwart the onside kick attempt and melt the clock away.

"We had a really good week of practice this week and our guys responded, and it carried over into the game," Adams said. "We're still missing some guys, but the guys we had did a great job."

• Clarksville ran nearly twice as many offensive plays as Farmington, and were able to outgain the Cardinals in total offense, 309-301.

• Farmington now has seven straight wins over Clarksville. The Panthers' last win over the Cardinals came in 2010.

• Next week, Farmington hosts Greenbrier, while Clarksville's game against Pea Ridge has been canceled because of covid-19 concerns. 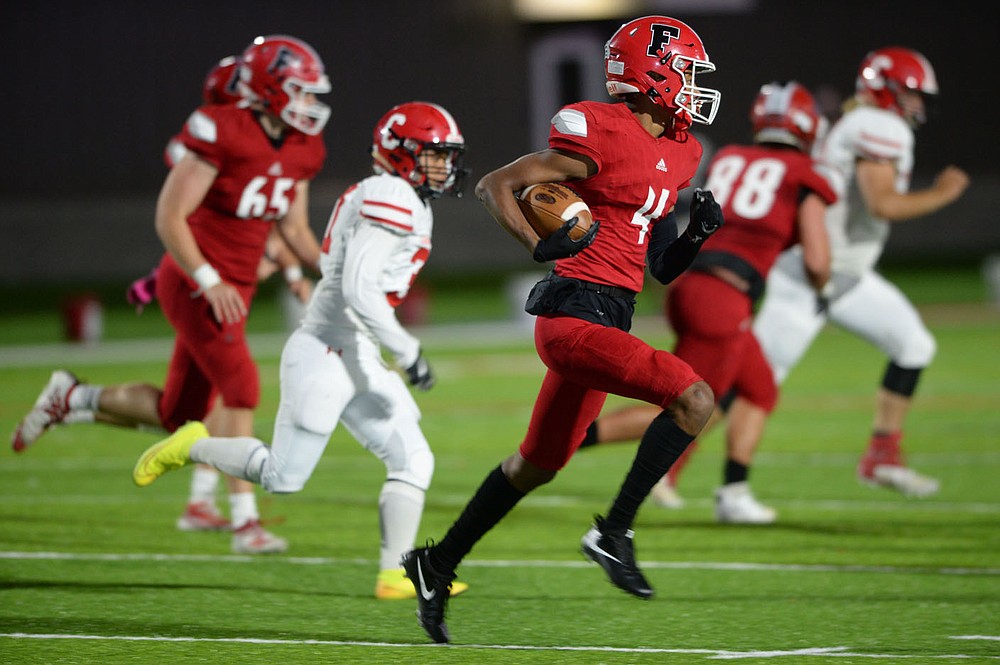 Farmington's Devonte Donovan (4) carries the ball Friday, Oct. 16, 2020, through the Clarksville defense during the first half of play at Cardinal Stadium in Farmington. Visit nwaonline.com/201017Daily/ for today's photo gallery. (NWA Democrat-Gazette/Andy Shupe) 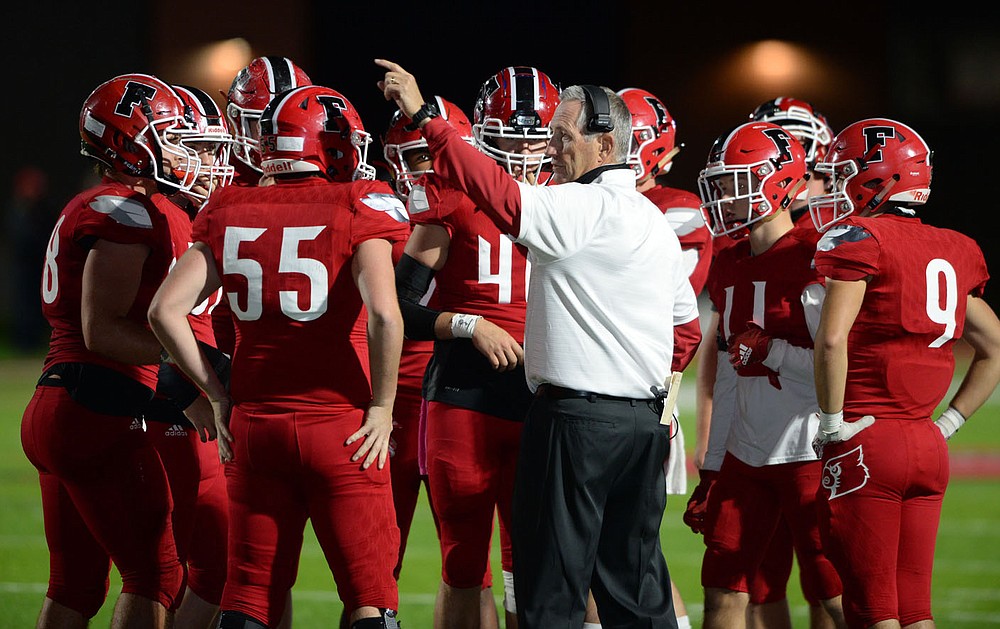