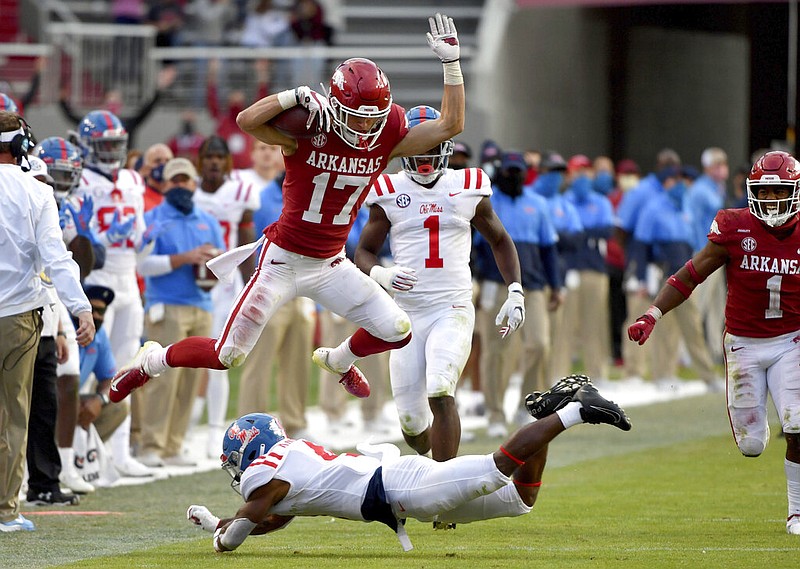 Arkansas defensive back Hudson Clark (17) leaps over Ole Miss running back Tylan Knight (4) as he returns an interception during the second half of an NCAA college football game at Fayetteville on Saturday, Oct. 17, 2020. (AP / Michael Woods )

After being denied a turnover by the officials last week that would have sealed a victory at Auburn, the University of Arkansas took the game out of the referees' hands Saturday.

The Razorbacks forced seven turnovers — including a pair of pick-sixes — and stopped Ole Miss twice inside the 5 on goal-line stands to defeat the Rebels 33-21 on Saturday at Reynolds Razorback Stadium.

The Razorbacks led 20-0 at halftime, including a Jalen Catalon pick-six for a touchdown, but Ole Miss (2-2) cut the deficit to 20-14 early in the fourth quarter.

After sputtering for most of the game, the Arkansas offense (2-2) responded with an 11-play, 70-yard drive that was capped by Treylon Burks' one-handed TD catch for a 26-14 lead with 7:36 left.

Ole Miss responded after converting a fake punt on fourth and 10 from its own 27, then scoring a touchdown to cut the Hogs' lead to 26-21.

After the Rebels stopped the Hogs, Ole Miss had the ball with 3:46 left at its own 16. On second and 12, Ole Miss QB Matt Corral was picked off and Grant Morgan returned it for a TD for a 33-21 lead to seal the victory. Hudson Clark later added his third INT of the game for Arkansas.

The Razorbacks went 3 and out with a replay review overruling a potential Ole Miss interception by safety Jaylon Jones on third down at midfield. The Rebels drove 59 yards to the Arkansas 1, with Matt Corral converted 4 and 1 with a 7-yard run along the way. Safety Jalen Catalon crushed receiver Elijah Moore on a slant pass. The Hogs made three stops inside their 4 before Ole Miss fumbled and Catalon recovered at the 5. After a 3 and out, the Hogs caught a break on a running into the punter penalty. After a couple of Trelon Smith runs, Treylon Burks took a swing pass 55 yards to the 13. Rakeem Boyd converted 4th and 1 from the 4 with a 3-yard run, then powered in from the 1 on the next snap. Julius Coates sacked Corral for a 10-yard loss to the 25, then Corral found Braylon Sanders for a 23-yard gain. Snoop Conner went 13 yards with a swing pass. Grant Morgan notched a sack on a third-down blitz. Mac Brown punted to the Arkansas 2. Mike Woods had a 17-yard grab, and Hudson Henry moved the chains with a 9-yard catch. Burks caught a 5-yard throw to convert third and 3 to the 44.

Feleipe Franks was sacked on third down by Ryder Anderson. Reid Bauer punted 57 yards and Elijah Moore returned it 8 yards to the 12. Matt Corral, hurried by Jonathan Marshall, threw deep left for Moore and CB Hudson Clark intercepted at the 48. Mike Woods took a slant 18 yards, then Treylon Burks ran 18 yards on a potential double pass. Blake Kern could not hold a potential TD pass on third down and A.J. Reed kicked a 23-yard FG. On the Rebels’ first snap, Jalen Catalon read Corral’s eyes made a pick at the 35 and returned it for a touchdown. Corral found Moore on a crossing route for 34 yards to the Arkansas 33. On fourth and 8, Corral threw a heater in the swirling wind to the 19 and Dontario Drummond couldn’t hang on. Arkansas went 3 and out and Bauer punted 62 yards to the end zone. The Hogs had two tackles for loss, then Corral ran for 9 yards on third down. Hudson Henry caught a 13-yard pass, then Burks took a lateral 11 yards. Tyson Morris caught a 17-yard throw to convert 3rd and 12. A.J. Reed booted a 32-yard FG. Grant Morgan had a TFL and a PBU that was a near interception. The Razorbacks notched one first down, then punted.

Jerrion Ealy had a 13-yard run, then Snoop Connor added a 13-yard burst on 4th and 3. Arkansas Coach Sam Pittman argued unsuccessfully for intentional grounding. Matt Corral hit Elijah Moore for 16 yards on 4th and 8. Arkansas stopped three successive runs inside the 3, with a trio of Hogs halting Connor inside the 1 on fourth down. Rakeem Boyd moved the sticks with a 7-yard run to the 11. Treylon Burks dropped a pass at the 22 on third down. The Rebels went 56 yards to score on Corral’s 7-yard slant to Moore. Connor had a 7-yard run on a fourth-and-5 snap. Lakia Henry forced a fumble and LeDarrius Cox recovered at the Arkansas 17. Greg Brooks Jr. intercepted Corral on the next play. Tyson Morris had a 15-yard catch and Burks added an 11-yard grab. Franks’ pass over the middle was tipped by De’Vion Warren and intercepted by safety Jon Haynes on the carom. The Rebels drove 27 yards to the Arkansas. On second and 10, Corral threw for Ontario Drummond and Hudson Clark jumped over the tight end for his second interception. A false start penalty and a negative yardage play set up third and 16 at the end of the period.

Reid Bauer had a 43-yard punt into the wind. The Rebels ran the ball on 7 straight plays before Matt Corral found Jonathan Mingo uncovered at the 9 and he ran in for a 22-yard touchdown. Treylon Burks went 11 yards with a Franks lateral toss. De’Vion Warren had an 8-yard reception. Franks rolled right and found Burks for 19 yards to the 16. After two run plays, Franks threw into the back left corner of the end zone, where Burks made a highlight reel grab, a 1-hand catch with a right toe tap for the touchdown. Grant Morgan tipped and nearly intercepted Coral on third down. The Rebels snapped to up back MoMo Sanogo on a fake punt and he went 47 yards. The Rebels went into lightning fast mode and scored on Ealy’s 1-yard keeper. Burks’ 12-yard catch moved the chains before Boyd dropped a third and 6 screen play with lots of grass ahead of him. Two plays later, Morgan intercepted Corral over the middle and returned it 23 yards for a TD. On fourth and 17 after a holding penalty, Hudson Clark jumped a route to Mingo, intercepted and returned it 18 yards. Franks ran 14 yards, Trelon Smith went 15 to the 1 and the Razorbacks went to Victory formation.