Waste contract timing is at issue 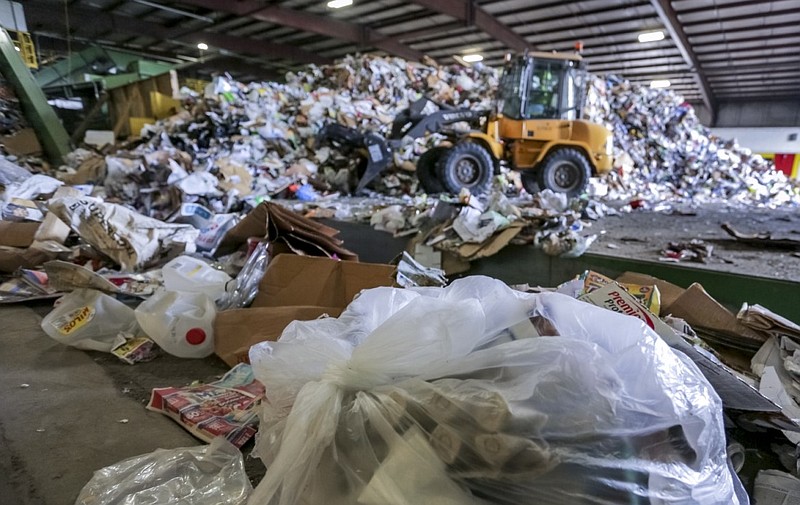 A front-end loader shoves a pile of recyclables into a conveyor belt for sorting at a Waste Management Materials recovery facility in this 2017 file photo.

A solid-waste contract set to be reviewed by the City Council on Monday includes some assurances to the city that the company is prepared to handle complaints.

However, it is unclear what recourse the city may have if Waste Management of Arkansas fails to deliver.

That the ordinance is being reviewed for the first time by the full council just 12 days before the current contract expires had some council members concerned.

But some said there should be no problem getting a contract extension to allow the council time to study the new one.

One major complaint regarding Waste Management has been a perceived lack of customer responsiveness, which several council members said has been an issue in the past, and which was confirmed by call logs from the mayor's office for 2016, 2019 and 2020.

Louise Sullivan, Mayor Shirley Washington's assistant and who served on a 12-member group that negotiated the new contract, said the company has assured the city that it will provide vastly improved customer service moving forward.

Washington was also named as a member of that group.

Council Member Glen Brown Jr. said he had not yet had a chance to look over the new contract in depth.

"I have looked it over but I haven't had time to look at the whole thing yet," Brown said.

"I'll probably do that over the weekend."

Brown said a concern for him would be if the contract doesn't provide the city with adequate recourse should the company fail to follow through with its assurances of improved customer service.

"That's definitely something we need to look into a little bit deeper," he said.

"When I take a look at it a little bit more I can probably give a little better assessment on it."

Brown said any major changes to the existing contract could be problematic with such a short time frame until that contract expires.

However, he said he is confident that if the council needs more time to delve more deeply into the new agreement that the old contract could be extended by a few weeks or even a month.

"I'm pretty confident that Waste Management would extend those services to us until we could look more closely at the contract," he said.

"I'm sure they wouldn't just stop services. I would hope they would extend their services long enough that we would have time to get this contract straightened out."

Council Member Steven Mays concurred with Brown regarding the council's ability to study the contract beyond the Oct. 31 expiration date without an interruption of service.

He said past complaints about the company's service have had an effect.

"I think Waste Management now has really felt the need to service the people in Pine Bluff a lot better," he said.

"I think they deserve another chance for another five years."

Mays said he recently attended a tour at the company's 6404 W. Barraque St. facility and came away impressed.

Council Member Win Trafford was noncommittal when asked his preference as far as pushing the issue through on Monday or delaying it for more study.

But he did say he felt like the issue should have public input.

Council Member Bruce Lockett said that, from a practical standpoint, the city likely has little choice but to move forward with the contract.

"I don't know why it's come to this because we knew for a long time that the contract was coming up for renewal," Lockett said.

"We won't meet again until the second of November, but if we table it until then, we'll only be two days from the time it expires."

He said, however, that he has seen improvements in recent months in the service provided by Waste Management.

"The big issue with the public has been customer service, but for the last six to 12 months they have really tightened up in that regard," Lockett said.

"I haven't gotten a lot of calls lately from the public about their customer service."

On Tuesday, two members of the City Council's three-member Public Health and Welfare Committee, Joni Alexander and Ivan Whitfield, heard a review of the contract presented by Sullivan, who said an area of contention that was looked at closely was customer service and complaints that the company has not been responsive to customers in the past.

Whitfield was also one of the 12 members of the group that negotiated the contract.

"The main thing I want you to be aware of is that customer service has been one of the key things that has been critical in all the phone calls we've been getting in the mayor's office," Sullivan said, adding that she had received assurances from the company that the local Waste Management office would continue to take customer service calls and that the Franklin, Tenn., office would act as a backup.

"One of the key things we've had problems with has been responsiveness," Sullivan told Whitfield and Alexander.

"It's just a long wait time before people can get in contact to talk to anyone, so they have committed to us response time is going be like nanoseconds going forward, or at least a couple of minutes, which is a major improvement."

The ordinance accepting the new contract is up for the first reading Monday night.

The council may, at its option, suspend the rules and push the ordinance through that night, or leave the final decision for a subsequent council meeting in order to study the matter further. 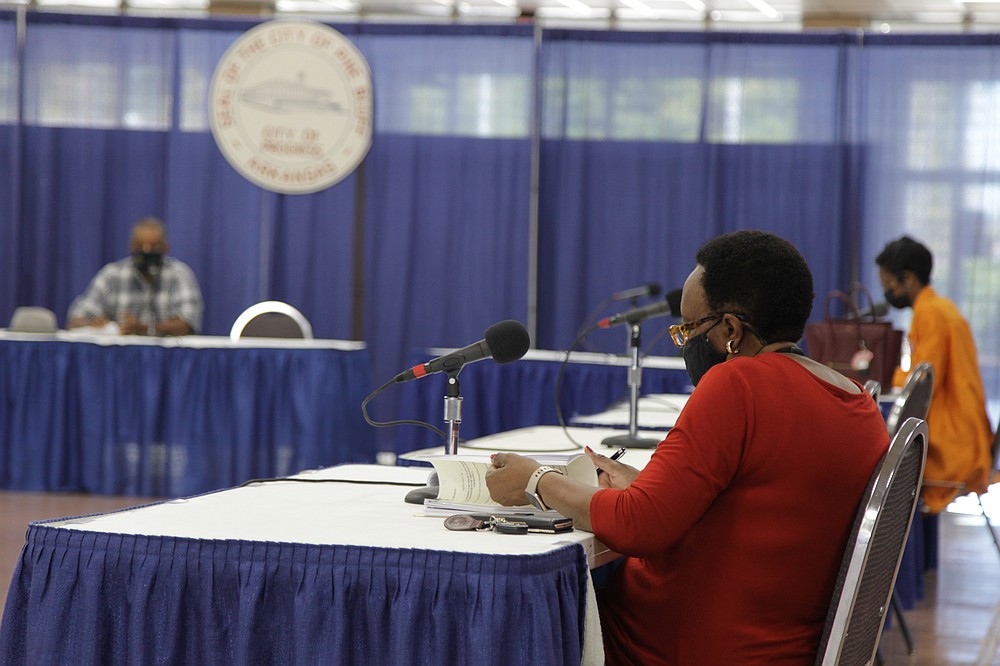 Louise Sullivan, foreground, assistant to Mayor Shirley Washington, goes over the particulars of a new solid waste contract being proposed between the city and Waste Management of Arkansas, with Public Health and Welfare Committee members Ivan Whitfield, left, and Joni Alexander, right. The issue goes to the full council Monday night. Some council members have favored giving the council more time to study the issue or to give time for public comment, but with the old contract set to expire Oct. 31, there is pressure to get the new agreement ratified. A big concern expressed by council members is past customer service problems with Waste Management. (Pine Bluff Commercial/Dale Ellis)
ADVERTISEMENT