Arkansas' count of coronavirus cases rose Saturday by 883, breaking a three-day run of increases of more than 1,000 new cases a day.

It was the second increase in a row that was smaller than both the one the day before and the one a week earlier.

The death toll from the virus, as tracked by the state Department of Health, rose by 19 to 1,684.

The number of patients hospitalized with covid-19 fell by 14 to 576. Those patients included 94 who were on ventilators, down from 102 a day earlier.

In a tweet announcing the day's numbers, Gov. Asa Hutchinson urged Arkansans to take steps to prevent the virus's spread.

"Our cases next week will be determined by what we do and our discipline this weekend," the Republican governor said. "We must all be mindful that COVID-19 has set in for the winter and we have to take precautions."

The increase in cases included 710 that were confirmed through polymerase chain reaction, or PCR, tests. The other 173 were "probable" cases, which include those identified through less-sensitive antigen tests.

Already at a record level since Wednesday, the number of confirmed or probable cases that were considered active rose by 201, to 8,810.

That reflected the cases that were added Saturday, the 19 deaths, 664 Arkansans who were newly classified as having recovered, and a reduction in the Health Department's count of people with active infections who died of reasons unrelated to covid-19. (That number fell by one, to eight.)

Health Department spokesman Gavin Lesnick said the department determined that the person lived in another state.

The death toll among confirmed cases rose to 1,533. The count of deaths among probable cases remained unchanged at 151.

Despite the different classifications, the Health Department has said it treats confirmed and probable cases the same for the purposes of its contact-tracing efforts. That includes requiring people whose results are positive from either type of test to isolate themselves and for those they may have infected to quarantine.

Last week was the first time the state had added more than 1,000 cases a day to its tallies for more than two days in a row. The streak included a record 1,278 cases that were added on Thursday.

Over a rolling seven-day period, the average number of cases added to the tallies each day fell from an all-time high of 911 on Thursday to 890 as of Friday and 886 as of Saturday.

"Compared to the ones of the previous two days it's better, but it's hard to say total new cases of 883 is good," Joel Tumlison, a Health Department physician specialist in outbreak response, said. Over the past couple weeks, he said, the virus has been spreading to more rural areas than in the past.

"Unfortunately, it's kind of a matter of time, and it has to do with people going back to normal activities," such as going to work, school, church and sporting events, Tumlison said.

"People are getting together more often, where maybe people are tiring of being as cautious with how they're observing the measures, and so we're seeing spread in not just one type of situation but in many types of situations where people gather," he said. "Some of those areas that hadn't experienced it before are starting to see what other areas had already experienced."

Tumlison pointed to the decrease in hospitalizations, which reached a high of 608 on Monday, as a positive development. "Hopefully it will continue to trend down, but with an increase in cases it's worrisome that it could go back up," he said.

Meanwhile, the Health Department's "interim draft" vaccination plan lists health care workers, first-responders and "essential government leaders" as likely being first in line to get a covid-19 vaccine, once one is approved, during the initial period when limited supplies are available.

Health care workers providing testing or vaccinations for covid-19 also would be prioritized.

The next group who would have priority includes people at risk for developing severe complications from the infection, including people with chronic illnesses; those age 65 and older and "essential workers at increased risk."

Once a larger supply is available, the vaccine would go to other medical facilities, pharmacies, other food processing and manufacturing facilities, residents of long-term care facilities, university employees and "other critical infrastructure personnel, such as utility, transportation and grocery store employees."

The last phase of distribution would include expanding the "vaccine administration network for increased access in Arkansas" and targeting "hard to reach populations, homeless, vulnerable populations, and low vaccination uptake or coverage areas."

The final determination of priority groups will be based on recommendations of a advisory committee to the U.S. Centers for Disease Control and Prevention headed by Arkansas Health Secretary Jose Romero.

Romero has said that group will hold an emergency meeting to finalize its recommendations after the U.S. Food and Drug Administration approves a vaccine.

States were required to submit their vaccine plans to the CDC on Friday.

Tumlison noted that health care workers are at risk of not only getting the virus from patients but also of passing it on to other patients.

"Those people are already sick, ill, weakened," Tumlison said. The virus is "much more dangerous for them," he said.

Until officials know which vaccine will be available, the planning "is not terribly specific," he said.

"We're going to keep getting ready as much as we can so that all the steps that we know we can take now, we can get those in gear so that when we do have a vaccine, we're not making those plans then which could have already been done," he said.

The state's count of confirmed and probable cases rose by 71 in Pulaski County; 57 each in Craighead and Washington counties; 46 in Benton County; and 42 in Faulkner County.

Among prison and jail inmates, the state's count of cases rose by 54.

Such increases can reflect new cases or ones that were added earlier but were not immediately classified as coming from a jail or prison.

Cases among inmates are also sometimes added several days after a test is conducted after information from laboratory reports is entered into a state database.

Arkansans age 18-24, who make up about 10% of the population, accounted for 15% of the increase in cases on Saturday.

The count of virus deaths increased by six each in Washington and Little River counties and three each in Garland and Mississippi counties.

The death toll increased by two in Faulkner County and one each in Benton, Boone, Craighead, Independence, Lonoke, and St. Francis counties.

The Health Department subtracted three deaths from its count of virus deaths in Sevier County and one death each from the counts in Clark, Johnson, Madison and Pike counties.

Lesnick said the decrease in those counties likely reflected corrections in the data on the residences of people who died.

"That happens on occasion -- sometimes nursing home residents are initially listed with a former address and not the nursing home where they most recently lived, for example," Lesnick said in an email.

Among nursing-home and assisted-living facility residents, the count of virus deaths rose by nine, to 623. 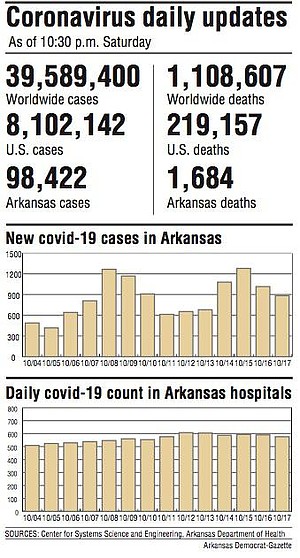