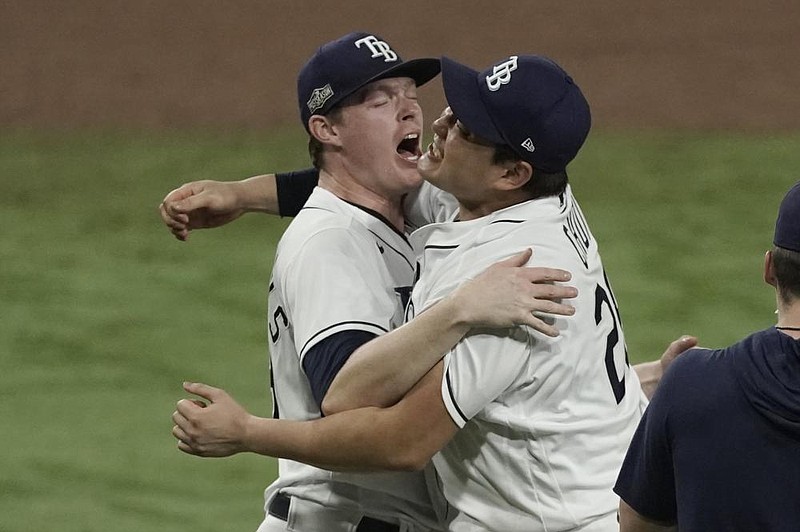 The Rays will face either the Los Angeles Dodgers or Atlanta Braves in the World Series in Arlington, Texas, starting Tuesday night.

Tampa Bay's only other World Series appearance was in 2008, when it lost to the Philadelphia Phillies in five games.

The innovative Rays led the AL with a 40-20 record in the pandemic-shortened season. Known for their pitching and defense, they sometimes deploy a four-man outfield.

"You sit here and look at this group of guys, and I always say we don't have a lot of household names, but at the same time, people are making a name for themselves right now," said outfielder Kevin Kiermaier, Tampa Bay's longest-tenured player. "And if you don't know the name by now, they better learn them, because we've got some boys who can play."

Right fielder Manuel Margot squeezed Aldemys Diaz's flyball in his glove for the final out and fireworks burst over the empty ballpark as theRays began to celebrate.

Arozarena was chosen as the ALCS MVP and did Cristiano Ronaldo's famous goal celebration dance.

Tampa Bay snapped a three-game losing streak and prevented the Astros from matching the 2004 Boston Red Sox, the only major-league team to rally from a 3-0 deficit to win a seven-game series.

The Rays also kept the Astros from becoming the first team to win a pennant with a losing regular-season record (29-31).

The loss ended Houston's first season since its sign-stealing scandal was revealed. The Astros were viewed by many fans as villains for their role in the cheating scandal en route to the 2017 title against the Dodgers.

Under new Manager Dusty Baker, the Astros were trying to reach the World Series for the third time in four seasons. They lost Game 7 to Washington last year.

Mike Zunino homered and drove in two runs for the Rays.

Arozarena, relatively unknown before these playoffs, set a rookie record with his seventh home run of the postseason. His 21 hits are one shy of Derek Jeter's 1996 rookie postseason record.

Nicknamed "The Cuban Rocket," the 25-year-old Arozarena drove a 1-1 sinker from Lance McCullers to right-center field at Petco Park with one out in the first for a two-run home run.

Margot, who played with the San Diego Padres from late in the 2016 season until being traded to Tampa Bay in the offseason, was aboard after getting hit with a pitch.

Arozarena defected from Cuba to Mexico in 2015, signed with the St. Louis Cardinals in 2016 and made his big-league debut last year. Traded to Tampa Bay in the offseason, he tested positive for covid-19 before summer camp and didn't make his 2020 debut until Aug. 30.

Until he started showing his October power, Arozarena was best known for a gaffe he committed while with the St. Louis Cardinals last postseason. After the Cardinals beat Atlanta in the NL division series, he posted Manager Mike Shildt's profane clubhouse rant to social media, not realizing it would get a negative reaction.

Morton held the Astros to 2 hits in 5 2/3 scoreless innings while striking out 6 and walking 1. He retired 14 consecutive batters until walking Martin Maldonado with one out in the sixth. George Springer forced Maldonado and took third on Jose Altuve's two-out infield single, and Manager Kevin Cash pulled Morton after just 66 pitches. Nick Anderson came on and retired Michael Brantley.

Morton is the first major-leaguer to earn the victory in four winner-take-all games, including Game 7 of the 2017 World Series and Game 7 of the 2017 ALCS against the Yankees when he was with Houston. He signed with Tampa Bay as a free agent before the 2019 season and won the wild card game at Oakland last year. The Rays were then eliminated by the Astros in the ALDS.

The Astros broke through against the Rays' bullpen in the eighth. Carlos Correa hit a two-run single off Pete Fairbanks before the reliever struck out Alex Bregman on a 100 mph fastball.

Fairbanks worked around a one-out single in the ninth to close it for a save. 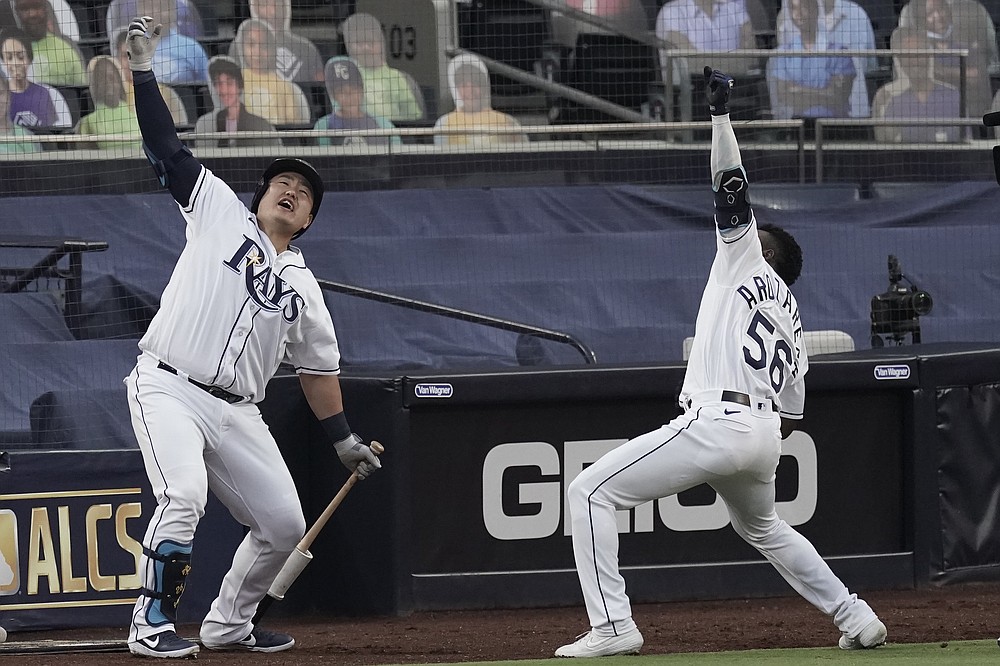 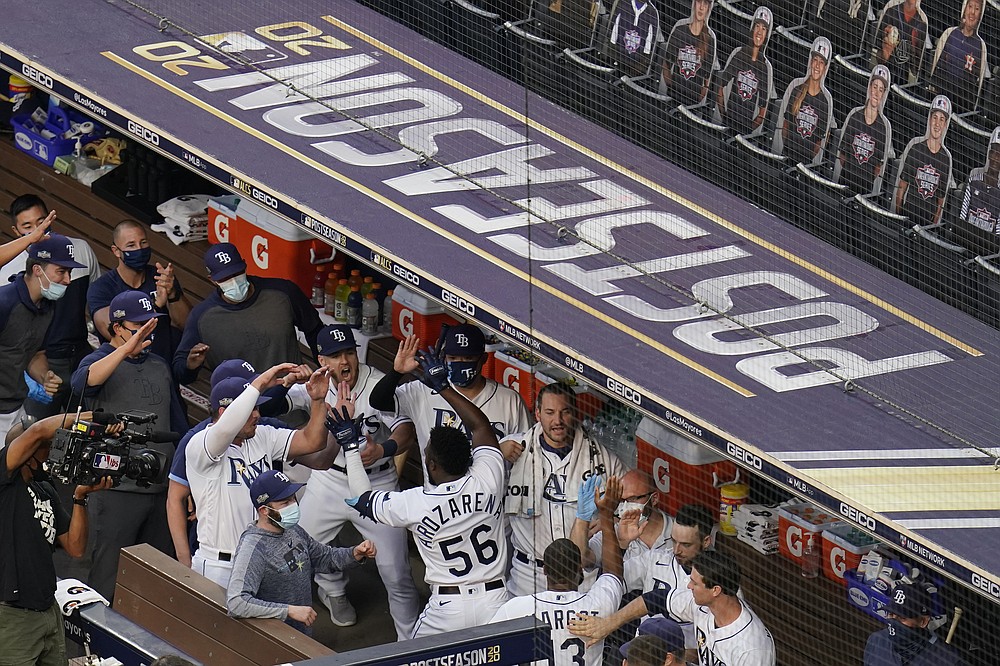 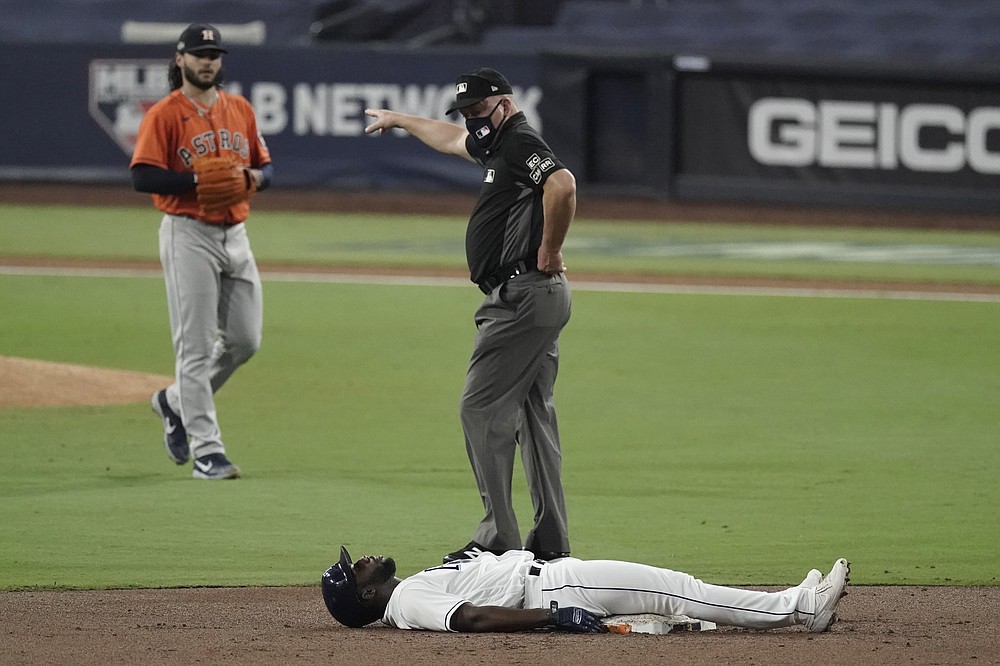 Second base umpire Jeff Nelson indicates to Tampa Bay Rays Randy Arozarena to get off the field after he was forced out by Houston Astros shortstop Carlos Correa during the third inning in Game 7 of a baseball American League Championship Series, Saturday, Oct. 17, 2020, in San Diego. (AP Photo/Jae C. Hong) 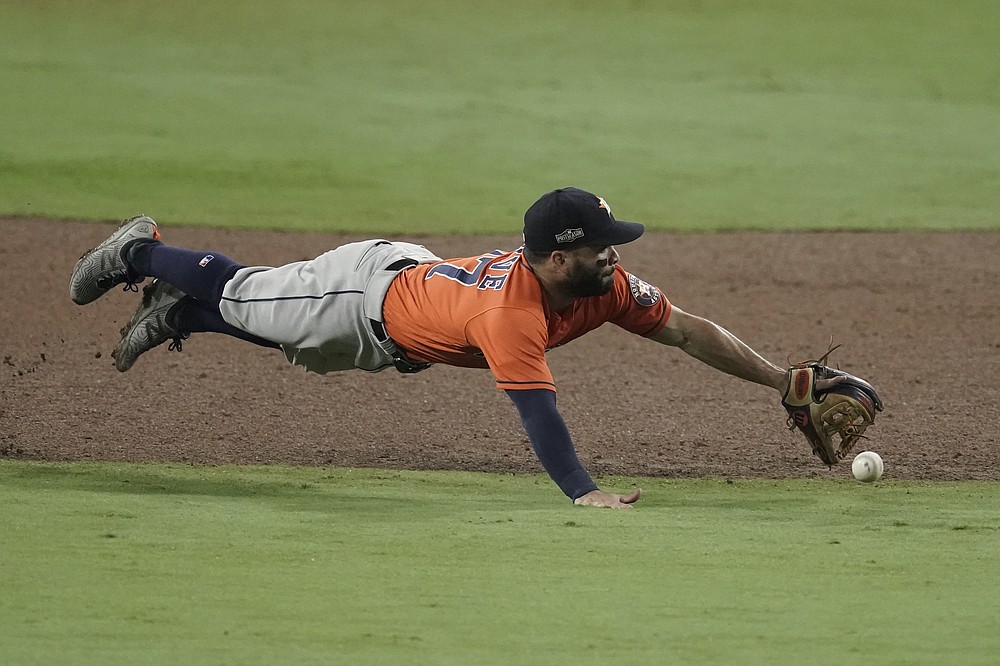 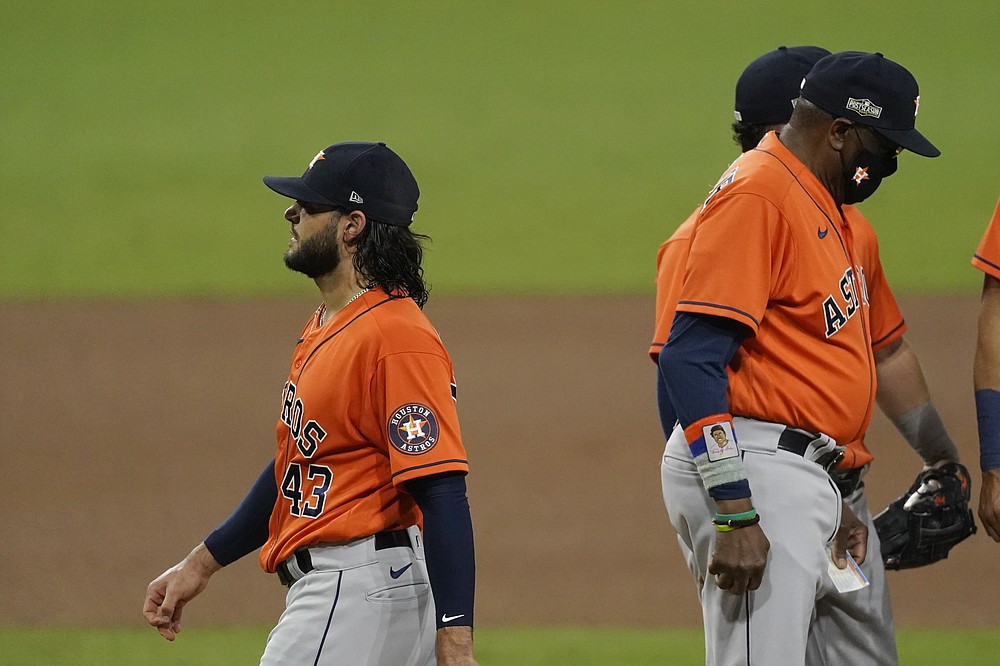 Houston Astros pitcher Lance McCullers Jr. walks off the field after being pulled from the game by Houston Astros manager Dusty Baker Jr. during the fourth inning in Game 7 of a baseball American League Championship Series against the Tampa Bay Rays, Saturday, Oct. 17, 2020, in San Diego. (AP Photo/Ashley Landis)
ADVERTISEMENT