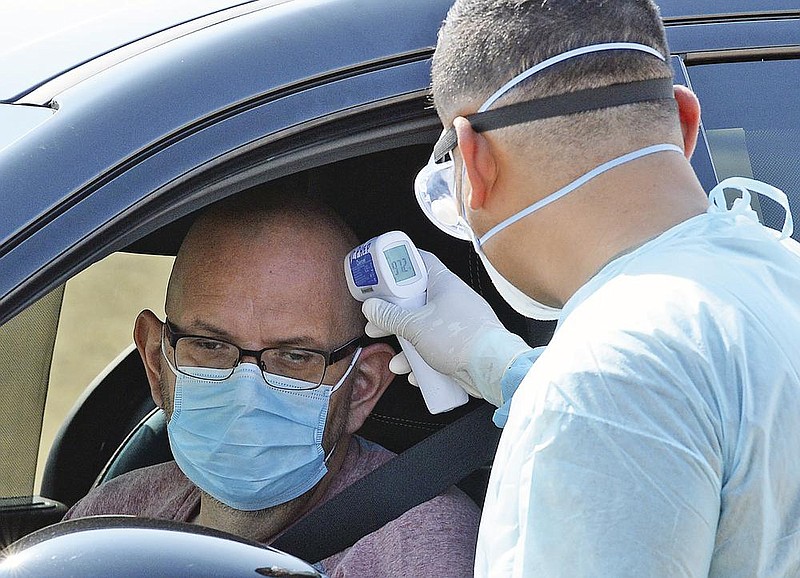 WESSINGTON SPRINGS, S.D. -- Rural Jerauld County in South Dakota didn't see a single case of the coronavirus for more than two months stretching from June to August. But over the past two weeks, its rate of new cases per person soared to one of the highest in the nation.

"All of a sudden it hit, and as it does, it just exploded," said Tom Dean, one of just three doctors who work in the county.

As the brunt of the virus has spread into the Upper Midwest and northern Plains, the severity of outbreaks in rural communities has come into focus.

Doctors and health officials in small towns worry that infections may overwhelm communities with limited medical resources. And many say they are still running up against attitudes on mask-wearing that have hardened along political lines and against a false notion that rural areas are immune to widespread infections.

Dean took to writing a column in the local weekly newspaper, the True Dakotan, to offer his guidance. In recent weeks, he's watched as one in roughly every 37 people in his county has tested positive for the virus.

It moved through the nursing home in Wessington Springs where both his parents lived, killing his father. The community's six deaths may appear minimal compared with thousands who have died in cities, but they have propelled the county of about 2,000 people to a death rate roughly four times higher than the nationwide rate.

Rural counties across Wisconsin, North Dakota, South Dakota and Montana sit among the top in the nation for new cases per capita over the past two weeks, according to Johns Hopkins University researchers. Overall, the nation topped 8 million confirmed coronavirus cases in the university's count on Friday.

In counties with just a few thousand people, the number of cases per capita can soar with even a small outbreak -- and the toll hits close to home in tight-knit towns.

"One or two people with infections can really cause a large impact when you have one grocery store or gas station," said Misty Rudebusch, the medical director at a network of rural health clinics in South Dakota called Horizon Health Care. "There is such a ripple effect."

[Video not showing up above? Click here to view » https://www.youtube.com/watch?v=9TmVTchIQ1o]

Wessington Springs is a hub for the generations of farmers and ranchers who work the surrounding land. Residents send their children to the same schoolhouse they attended and have preserved cultural offerings such as a Shakespeare garden and opera house.

They trust Dean, who for 42 years has tended to everything, including broken bones and high blood pressure. When a patient needs a higher level of care, the family physician usually depends on a transfer to a hospital 130 miles away.

As cases surge, hospitals in rural communities are having trouble finding beds. A recent request to transfer a "not desperately ill, but pretty" sick covid-19 patient was denied for several days, until the patient's condition had worsened, Dean said.

"We're proud of what we got, but it's been a struggle," he said of the 16-bed hospital.

The outbreak that killed Dean's father forced Wessington Springs' only nursing home to put out a statewide request for nurses.

Thin resources and high death rates have plagued other small communities. Blair Tomsheck, interim director of the health department in Toole County, Mont., worried that the region's small hospitals would need to start caring for serious covid-19 patients after cases spiked to the nation's highest per capita.

One out of every 28 people in the county has tested positive in the past two weeks, according to Johns Hopkins researchers.

"It's very, very challenging when your resources are poor -- living in a small, rural county," she said.

Infections can also spread quickly in places like Toole County, where most everyone shops at the same grocery store, attends the same school or worships at a handful of churches.

"The Sunday family dinners are killing us," Tomsheck said.

Even as outbreaks threaten to spiral out of control, doctors and health officials said they are struggling to convince people of the seriousness of a virus that took months to arrive in force.

"It's kind of like getting a blizzard warning and then the blizzard doesn't hit that week, so then the next time, people say they are not going to worry about it," said Kathleen Taylor, a 67-year-old author who lives in Redfield, S.D.

In swaths of the country decorated by flags supporting President Donald Trump, Dean draws a direct connection between Trump's approach and the lack of precautions in his town of 956 people.

"There's the foolish idea that mask-wearing or refusal is some kind of a political statement," Dean said. "It has seriously interfered with our ability to get it under control."

Even amid the surge, Republican governors in the region have been reluctant to act. North Dakota Gov. Doug Burgum said recently, "We are caught in the middle of a covid storm," as he raised advisory risk levels in counties across the state. But he has refused to issue a mask mandate.

South Dakota Gov. Kristi Noem, who has carved out a reputation among conservatives by forgoing lockdowns, viewed the surge in cases as a result of testing increases, even though the state has had the highest positivity rate in the nation over the past two weeks, according to the COVID Tracking Project.

Positivity rates are an indication of how widespread infections are.

Whether the requirement survives doesn't matter to Jody Bierhals, a resident of Gillett, Wis., who doubts the efficacy of wearing a mask. Her home county of Oconto, which stretches from the northern border of Green Bay into forests and farmland, has the state's second-highest growth in coronavirus cases per person.

Bierhals, a single mother with three kids, is more worried about the drop in business at her small salon. The region depends on tourists, but many have stayed away during the pandemic.

"Do I want to keep the water on, or do I want to be able to put food on the table?" she asked. "It's a difficult situation."

Bierhals said she thought the virus couldn't be stopped and that it would be best to let it run its course. But local attitudes like that have left the county's health officer, Debra Konitzer, desperate.

Konitzer warned that the uncontrolled spread of infections has overwhelmed the county's health systems.

"I'm just waiting to see if our community can change our behavior," she said. "Otherwise, I don't see the end in sight."

Theaters in New York City aren't included, and counties must have a positivity rate below 2% on a 14-day average and have no "cluster zones."

Audiences will be restricted to 25% of capacity, with a maximum of 50 people per screen, Cuomo said at a briefing. Masks will be required, and there will be assigned seating to ensure social distancing.

Elsewhere, German Chancellor Angela Merkel urged citizens to come together like they did in the spring to slow the spread of the coronavirus as the country posted another daily record of new cases Saturday.

"Difficult months are ahead of us," she said in her weekly video podcast. "How winter will be, how our Christmas will be, that will all be decided in these coming days and weeks, and it will be decided by our behavior."

In Paris and eight other French cities, restaurants, bars, movie theaters and other establishments were being forced to close no later than 9 p.m. to try to reduce contact among people. The country was deploying 12,000 extra police officers to enforce the new rules.

Many restaurant owners have bristled at the order. An earlier, monthslong lockdown devastated the sector.

"I have the right to question the government's approach. I think it's a catastrophic measure for the industry," said Xavier Denamur, who owns Les Philosophes and several other bistros in Paris's chic Le Marais district. Denamur said that if nothing else, the curfew should be 11 p.m.

"At least that would not destroy us," he said. "There's no evidence that this difference of a couple of hours will have any effect on the virus circulating."

In Britain, a three-tier regional approach to battle the pandemic introduced by Prime Minister Boris Johnson went into effect, with each level bringing progressively tighter restrictions.

On Saturday, Tier 2 cities such as London and York were subject to a ban on socializing with people from other households indoors, while the county of Lancashire joined Liverpool in Tier 3 with the tightest restrictions.

Among other things, that means pubs have been forced to close, and socializing with others is banned even in many outdoor settings.

The top U.K. teachers' union is pushing for a two-week nationwide "circuit-breaker" lockdown that would extend the half-term school break, according to a report in the Telegraph.

In Northern Ireland, a lockdown lasting four weeks went into force Friday. All pubs and restaurants must close except for takeaway services, and schools will close for two weeks for an extended half-term holiday.

In Italy, Prime Minister Giuseppe Conte is planning to announce new measures today, according to a statement from his office.

Italy's Lombardy region, which includes Milan, has reined in alcohol consumption and gambling, and Conte's government may order bars and restaurants to close at 10 p.m., ban some sporting activities and change hours for high schools to prevent congestion, according to government officials, who asked not to be identified in line with their policy.

In the capital, Rome, residents grumbled as cases climbed, fearing a return to the strict countrywide measures that were imposed when the virus was spreading out of control.

"The situation is critical thanks to the morons, because I call them morons, who have not respected the rules," said resident Mario Massenzi. "And if we fall back into the same situation as in March, we are finished."

The Vatican, meanwhile, said someone who lives in the same hotel as Pope Francis tested positive for the virus, adding to the 11 cases of covid-19 among the Swiss Guards who protect him.

In the Mideast, Iran announced Saturday that its death toll from the coronavirus has passed 30,000 in what has been the region's worst outbreak.

On Wednesday, Iranian officials announced a travel ban to and from five major cities --including the capital, Tehran, and the holy city of Mashhad -- that they said aimed to contain the virus's spread.

The United Arab Emirates on Saturday announced its highest single-day total of new cases of the coronavirus amid a spike in the Gulf nation that is home to Abu Dhabi and Dubai.

The country's Health Ministry said tests found 1,538 new cases of the virus, pushing the overall number of cases to 114,387. 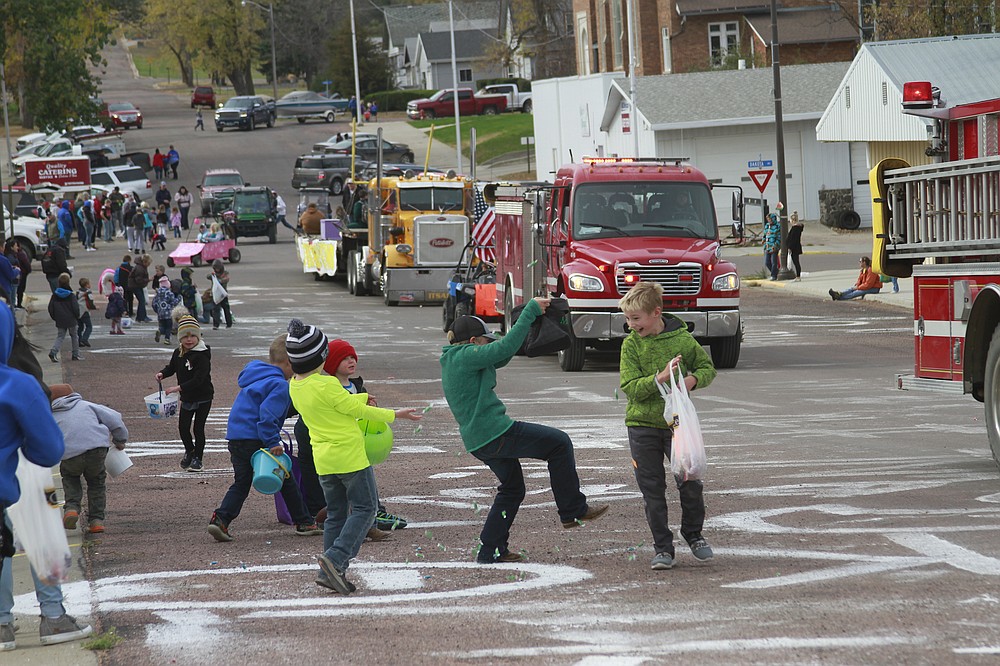 Children scramble for candy during a homecoming parade on Friday Oct. 16, 2020, in Wessington Springs, S.D. The parade had to be postponed due to a coronavirus outbreak that killed five residents of the local nursing home. (AP Photo/Stephen Groves) 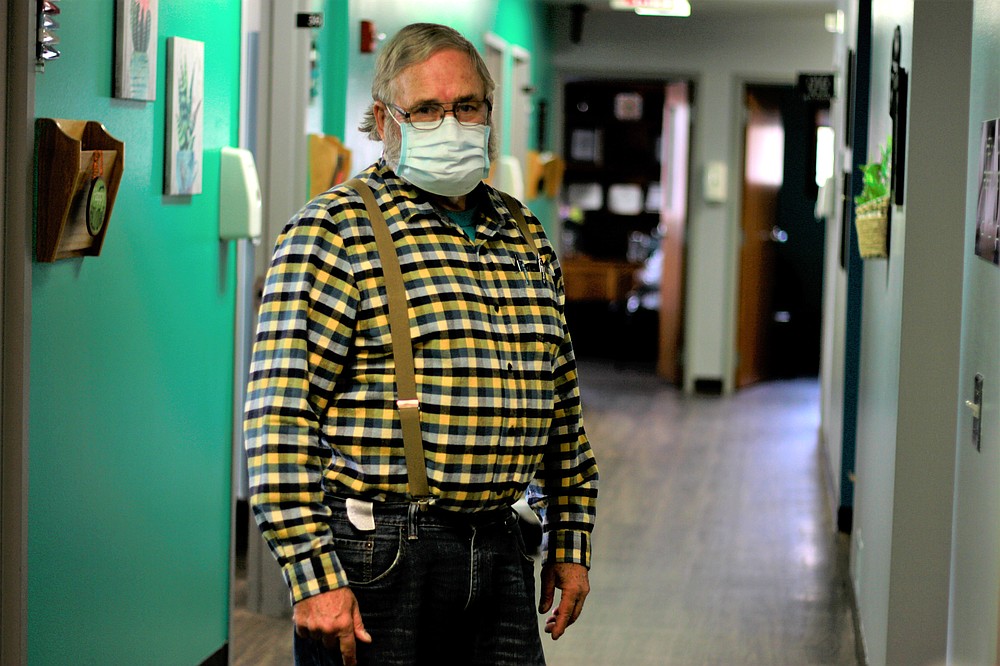 Dr. Tom Dean poses at his clinic in Wessington Springs, S.D., on Friday. Oct. 16, 2020. Dean is one of three doctors in the county, which has seen one of the nation's highest rates of coronavirus cases per person. He writes a column in the local newspaper, the True Dakotan, urging people to take precautions against the virus.(AP Photo/Stephen Groves) 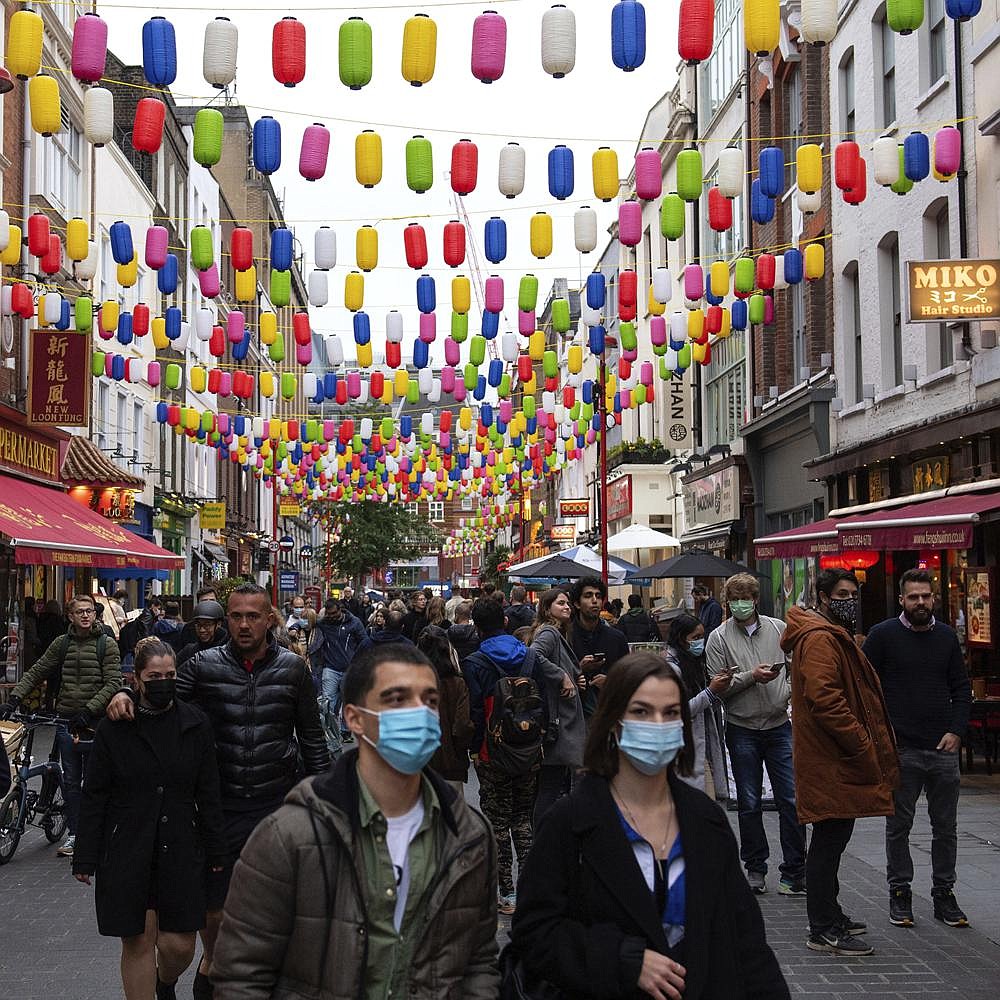 Crowds turn out Saturday in London’s Chinatown as new restrictions to curb the spread of the coronavirus take effect. Prime Minister Boris Johnson has introduced a three-tier regional approach, with each tier carrying progressively tighter restrictions. London has moved to Tier 2, which includes a ban on socializing indoors with people from other households. More photos at arkansasonline.com/1018covid/. (AP/Dominic Lipinski)
ADVERTISEMENT