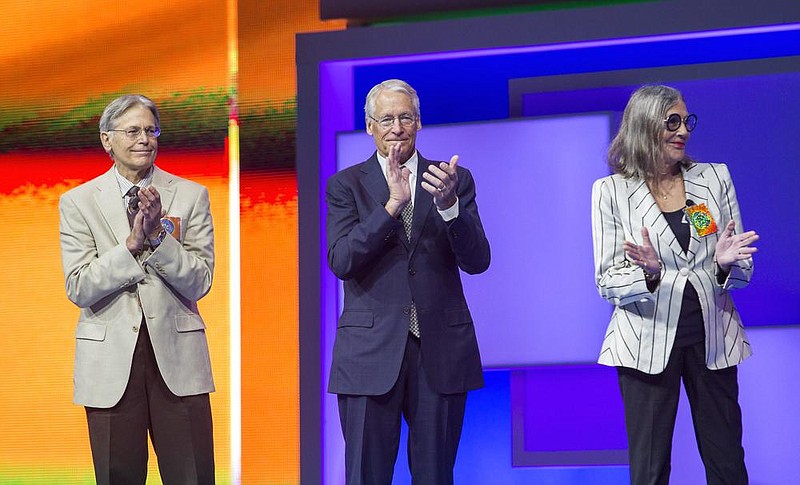 Jim Walton (from left), Rob Walton and Alice Walton stand on stage for the presentation of the Sam Walton Award during the annual Walmart shareholders meeting at Bud Walton Arena in Fayetteville in June 2015. (NWA Democrat-Gazette/JASON IVESTER)

The heirs of Walmart Inc. founder Sam Walton are well known for philanthropic giving, especially in their hometown of Bentonville and throughout Northwest Arkansas. But the nation's richest family also generously supports candidates, parties and causes across the political spectrum.

Despite the family's long-standing connection with Hillary Clinton, the former secretary of state and Walmart board member, the children and grandchildren of Sam and Helen Walton have long backed mainly conservative candidates and groups. However, new data shows some family members shifted their donations more to the left in recent years.

One has given money to the campaign of Democratic presidential nominee former Vice President Joe Biden and another donated to the Lincoln Project, a political action committee formed by Republicans aiming to prevent the reelection of President Donald Trump.

A thorough search of Federal Election Commission records didn't turn up any direct Walton support for Trump, either in 2016 or 2020.

Political donations are posted on OpenSecrets.org, the website of the nonprofit research group Center for Responsive Politics. The center gets the information from the Federal Election Commission. It received the latest figures on Sept. 21.

The Walmart heirs include Rob, Jim and Alice Walton, the surviving children of Sam and Helen Walton. Another son, John, died when his home-built aircraft crashed in 2005. His widow, Christy, inherited a small part of John Walton's fortune, with the rest going to their son, Lukas Walton, and various charities.

Lukas and seven more Waltons make up the second generation. Rob Walton has three children: Sam, Carrie Walton Penner and Ben. Jim Walton added four to the clan: daughter Alice Ann Walton Proietti and sons Steuart, Tom and James. Several of them, along with their aunt Alice, take an active role in the family's charitable arm, the Walton Family Foundation, and in various nonprofits.

Like all families, the Waltons seem to hold diverse political views. Some, like Jim Walton, look to be staunchly conservative, based on their political contributions.

Jim Walton, who has supported the campaigns of Republican congressmen Steve Womack and French Hill, both of Arkansas, also earlier this year gave $5,600 to U.S. Sen. Roy Blunt, R-Mo.

In addition, Walton donated $20,000 both this year and in 2019 to the California Republican Party, and this year alone has given $143,000 to the National Republican Senatorial Committee.

Big brother Rob Walton has donated mostly to Republican candidates, according to records dating to 1997. However, in that year he gave $1,000 to Arkansas Democrat and former U.S. Sen. Blanche Lincoln.

Alice Walton's donation history paints a more complex picture than that of her brothers. From at least the early 2000s through 2012, records show she gave solely to Republican candidates and party organizations.

There were only two exceptions to that pattern during those years -- modest donations to Lincoln, and Hillary Clinton.

Then in November 2013, a $25,000 donation to a group called Ready for Hillary seemed to signal a shift in her political ideology. From then on, Alice Walton has almost solely supported Democratic candidates and state and national Democratic parties.

The founder of Crystal Bridges Museum of American Art continues to support Womack. She gave $5,400 to his 2018 campaign and $5,600 this year.

Also on the liberal side of the family, Christy Walton has given $30,000 to the Lincoln Project as of Sept. 21. In 2019, her donations included $25,000 to the LGBTQ Victory Fund, which works to elect openly gay candidates, and another $25,000 to Planned Parenthood.

She also donated $5,600 in February to presidential hopeful Cory Booker, a Democrat senator from New Jersey whom she has supported in previous years. In 2019, she gave $2,800 to another Democrat presidential contender, Pete Buttigieg.

Her son, Lukas, 34, has given $5,600 this year to the Biden campaign, and $142,000 to the Democratic National Committee. He serves on the Walton Family Foundation's board, where he is chairman of the Environment Program Committee.

Jim Walton's eldest son, Steuart, seems to follow in his father's footsteps politically. In fact, he has also given generously to the National Republican Congressional Committee.

But his donation record revealed a few surprises.

For instance, Steuart Walton contributed to Lincoln's campaigns, giving $2,300 in 2008 and $2,400 in 2010. But perhaps the most unexpected donation was $2,700 given in 2018 to the campaign of Democrat Beto O'Rourke, a former presidential candidate from Texas.

Tom Walton, 37, appears to differ politically from his father and older brother. He supported Hickenlooper's presidential campaign in 2019 with a net donation of $2,800. Those contributions are the only ones currently listed for Tom Walton in the OpenSecrets database.

Hickenlooper had yet another supporter in Alice "Annie" Proietti, 40, the eldest of Jim Walton's four children. Proietti and her husband, Joseph Proietti, each gave $2,800 to Hickenlooper's 2019 campaign. Data for the couple on OpenSecrets only goes back to March 2019.

Annie Proietti is chairwoman of the Walton Family Foundation.

James M. Walton, who at 33 is the youngest Walton grandchild, also donates to Democrat candidates. In addition, he gave $50,000 last year to a federal super PAC called With Honor Fund. The organization supports military veterans either serving in or running for Congress and helps them build a cross-partisan agenda to halt gridlock and partisan bickering, according to the fund's website.

Besides serving on the Walton Family Foundation's board and Environment Program Committee, he co-leads a social-impact fund called Wend. He is described on the foundation's website as a philanthropist, policy advocate and conservationist.

Rob Walton's children also lean largely to the left. Ben Walton, his youngest and a Colorado resident, made his first recorded donation in 1991, when he gave $1,000 to then-presidential candidate Bill Clinton.

Starting in 2013, Ben Walton has made a few small donations to Democrat candidates each year. However, he gave $10,000 to the Democratic Party of Colorado in 2016.

He and his wife, Lucy Ana, support early childhood development programs in the U.S. and Chile. They also co-founded Zoma Capital, an investment portfolio focused on energy, water, community development, workforce development and mental health. He has served on many boards, including that of Crystal Bridges.

Carrie Penner's donation record is similar to her aunt's. She gave solely to Republican candidates and groups from 2002 through 2004. Then in 2014, she contributed $2,600 to Booker, and also donated to his race to become the Democratic presidential nominee in 2019 and 2020.

Since 2016, she's given mostly to state Democrat parties rather than specific candidates. She has supported the With Honor Fund PAC, though, giving $125,000 last year.

This year he has given $275,000 to a super PAC called EDF Action Votes, which promotes the goals of the Environmental Defense Action Fund.

CORRECTION: Members of the Walton family have made contributions to a super PAC called With Honor Fund. An earlier version of this article incorrectly identified the fund.