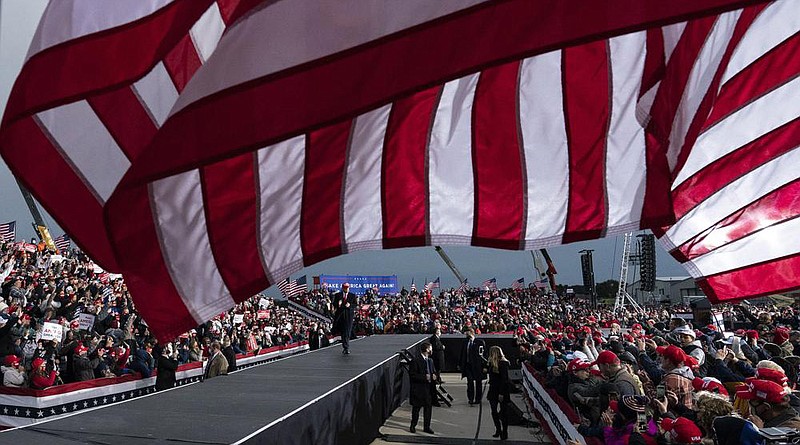 "The Democrat party you once knew doesn't exist," Trump told voters in Muskegon ahead of a rally in Wisconsin -- two states in the Upper Midwest that were instrumental to his 2016 victory.

Trump sought to paint Democrats as "anti-American radicals" on a "crusade against American history." He told moderate voters that they had a "a moral duty" to join the Republican Party.

The pitch comes as Trump faces head winds not only in national polling -- which shows his Democratic opponent, former Vice President Joe Biden, leading -- but also in key battleground surveys. And it comes after the campaign largely retreated from TV advertising in the Midwest, shifting much of its money to Pennsylvania and Sun Belt states such as Florida, North Carolina, Arizona and Georgia.

[Video not showing up above? Click here to view » https://www.youtube.com/watch?v=yxdaG_zhR1w]

Biden had no public events planned for Saturday. But in a memo to supporters, campaign manager Jen O'Malley Dillon warned about becoming complacent.

"The reality is that this race is far closer than some of the punditry we're seeing on Twitter and on TV would suggest," she wrote in the memo, a copy of which was obtained by The Associated Press. "If we learned anything from 2016, it's that we cannot underestimate Donald Trump or his ability to claw his way back into contention in the final days of a campaign, through whatever smears or underhanded tactics he has at his disposal."

Trump is keeping up an aggressive campaign schedule despite a recent bout with the virus. He's holding rallies today in Nevada and Monday in Arizona before returning Tuesday to Pennsylvania.

The difficulty of securing a second term was apparent Friday when Trump campaigned in Georgia. No Republican presidential contender has lost the state since 1992, but polling shows Trump and Biden in a tight contest. Trump also has had to court voters in Iowa, which he carried by almost 10 percentage points four years ago.

The latest campaign fundraising figures from the Trump team suggest he's likely the first incumbent president in the modern era to face a financial disadvantage. After building a large cash edge, his campaign spent lavishly, while Biden kept expenses low and benefited from an outpouring of donations that saw him raise nearly $1 billion over the past three months. That gives Biden a cash advantage with just over two weeks to go before the election.

In the hours before his rallies on Saturday, Trump focused on settling a score with a member of his own party, Republican Sen. Ben Sasse of Nebraska.

Referring to him as "Little Ben Sasse," Trump tweeted that the senator was a "liability to the Republican Party, and an embarrassment to the Great State of Nebraska."

The series of tweets came after Sasse told constituents Wednesday during a telephone town hall-style meeting that Trump has "flirted with white supremacists," that he mocks Christian evangelicals in private and that he "kisses dictators' butts."

Sasse, who is up for reelection this year, went on to criticize the president's handling of the coronavirus and said Trump's family has treated the presidency "like a business opportunity."

Trump on Twitter blasted Sasse as "the least effective of our 53 Republican Senators, and a person who truly doesn't have what it takes to be great."

Sasse's spokesman, James Wegmann, tweeted in response that Sasse was focusing on helping Republicans retain their 53-47 Senate majority, and "he's not going to waste a single minute on tweets."

Whitmer, a Democrat, was the focus of a kidnapping plot by anti-government extremists who were said to have been angered by lockdown measures she put in place as a result of the coronavirus. Thirteen men have been charged in connection with the scheme, which included plans to storm the state Capitol and to hold some kind of trial for the governor.

It's a theme Trump leaned into, while the crowd chanted, "Lock her up."

"You got to get your governor to open your state and get your schools open. The schools have to be open, right?" said Trump, who also took credit for federal law enforcement's role in foiling the plot.

A Whitmer aide responded to Trump's criticism in a tweet.

"Every single time the President does this at a rally, the violent rhetoric towards her immediately escalates on social media," Whitmer's digital director, Tori Saylor, tweeted. "It has to stop. It just has to."

Trump's rally Saturday in Wisconsin, planned at the Southern Wisconsin Regional Airport in Janesville, has reinforced the divide between Democrats and Republicans on how best to approach the pandemic. Trump's supporters insist the coronavirus should not bring life -- and the high-energy rallies -- to a halt, while the president's staunch critics accuse him of recklessly endangering Wisconsinites' lives.

Word of Trump's visit was enough to motivate Jen Kuhnle, a Janesville nurse, to recently take time out of her brief lunch break to pick up a yard sign for Biden. Asked what led her by the campaign office in Janesville's riverfront downtown, Kuhnle replied with one word: "Aggression."

"Coming here and doing this rally is just crazy. This is like a power trip for him -- he has to be in front of people cheering him," said Kuhnle, 40, who has not had to treat coronavirus patients but has many friends who have.

"I don't like everything Biden has to say, but Trump is just not a good person. Asking people to wear a mask is very easy, but he won't do it. He just makes light of it."

Seven miles south of the airport, farmer Gary Hahn has a giant 10-by-15-foot flag honoring Trump and Vice President Mike Pence flying from the top of his grain bins. The banner is so large that it's visible from nearby Interstate 90.

Hahn said he signed up for tickets to the rally but probably wouldn't go -- not because he's diabetic and is at higher risk for serious illness if he contracts covid-19, but because he's worried there is too much corn to be harvested from his 3,400 acres to spend an entire Saturday at a campaign rally.

"I would love to go. ... Nobody puts a gun to anybody's head making them go to the rallies. If you want to go, covid or not, this is still a free country, go for it, buddy," said Hahn, who with his wife, Michelle, owns G&M Acres farm just over the Illinois border.

"We've got friends since March who hardly have been 5 miles from home, scared to death, wear a mask all the time, don't let anyone in the door unless it's family. I'm not going to ride your butt and say you're an idiot, but I'm not gonna live that way."

Down the street at the Janesville Moose Lodge, Kate Dombeck pulled supplies out of a cramped storage closet for bingo night. The lodge, which has roughly 500 members, most of them over the age of 60, used to draw more than 100 people for bingo. But since the pandemic took hold, it's lucky to get 20.

"Trump should just stay the h* away. He's still probably got the virus, and he doesn't need to do his superspreading around here like he was doing at the White House," said Dombeck, 30, who voted for Libertarian Gary Johnson in 2016, plans to vote for Biden this year and isn't discussing politics with her Trump-backing parents.

"Trump has no morals. He has handled the pandemic like an imbecile," she said. "He ignored it for so long, and when he tested positive, my first thought was, 'Deny it now.'"

Frank McNamer, 70, is retired and serves on the lodge's board. He said Trump could have handled the pandemic better, but he remains undecided on how he'll vote after backing Democrat Hillary Clinton four years ago.

On one hand, McNamer said, it's important to keep continuity in the White House during a pandemic, and he thinks Trump did a good job with the economy before it struck. On the other, he thinks Biden would look out more for the working class.

One thing McNamer wasn't undecided on is whether Trump should hold his rally.

"If he's gonna get the votes, he's gonna have to show up. He should have skin in the game," said McNamer, wearing a Moose mask. "He's not bringing covid in all by himself. It's already here. If they want to run down there, without a mask on, go for it. It's your a on the line, not mine."

Information for this article was contributed by Brian Slodysko and Jill Colvin of The Associated Press; and by Bill Ruthhart of The Chicago Tribune. 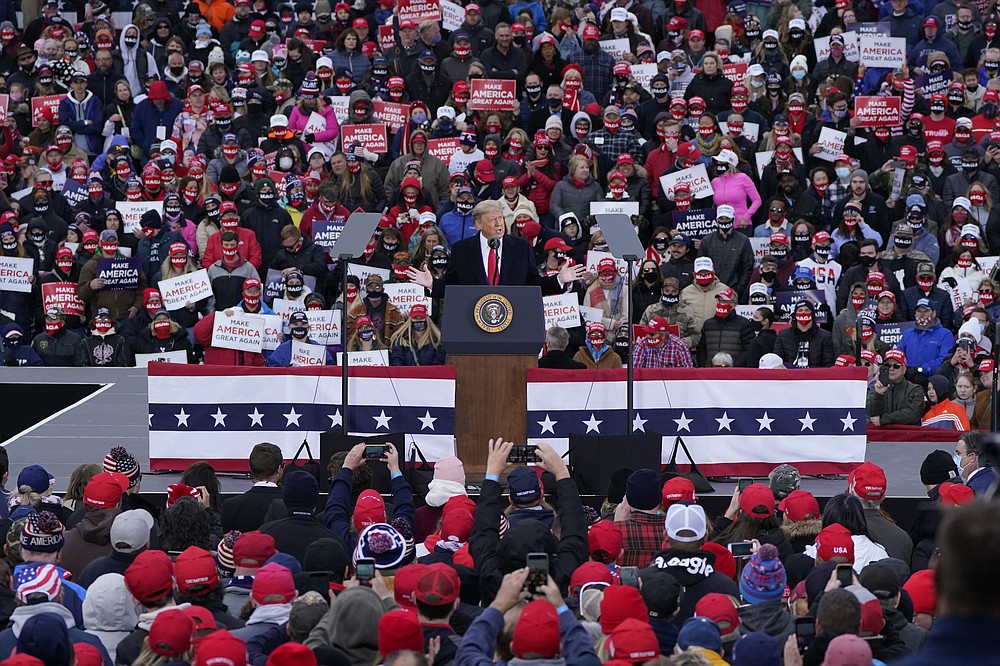 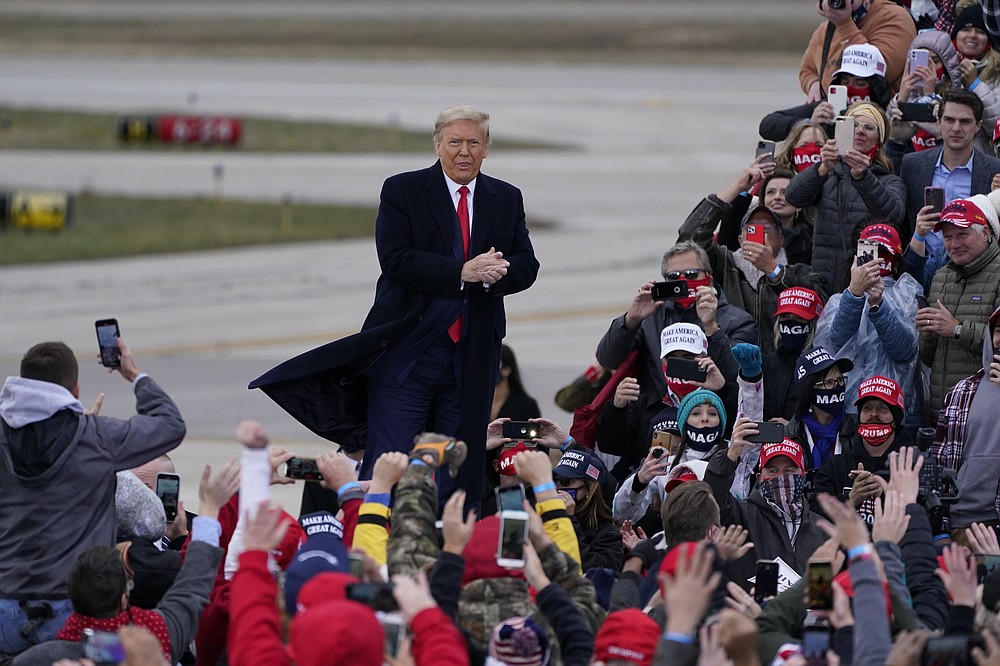 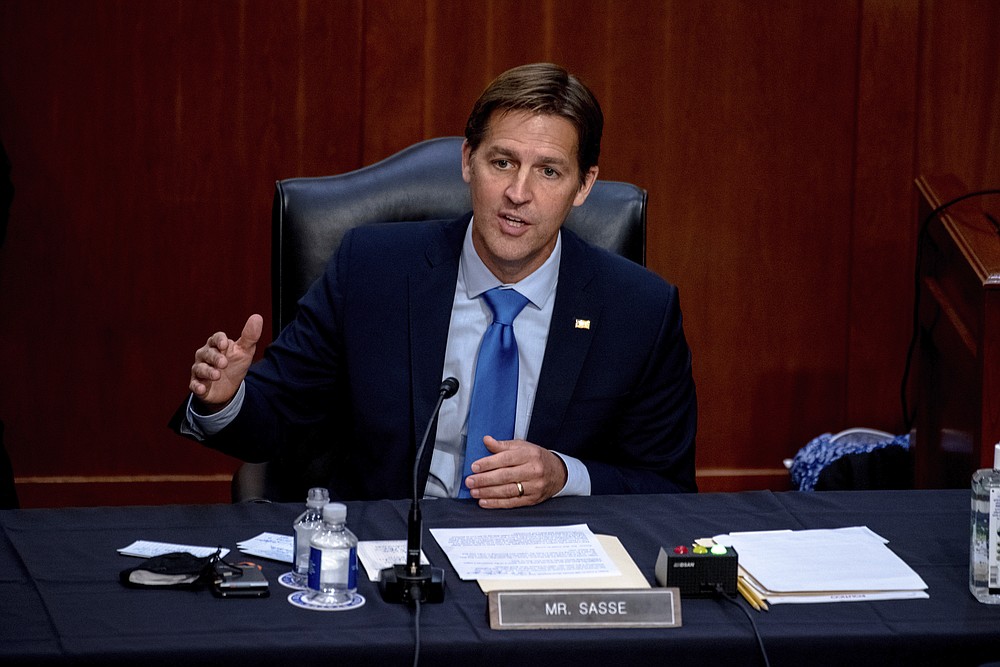 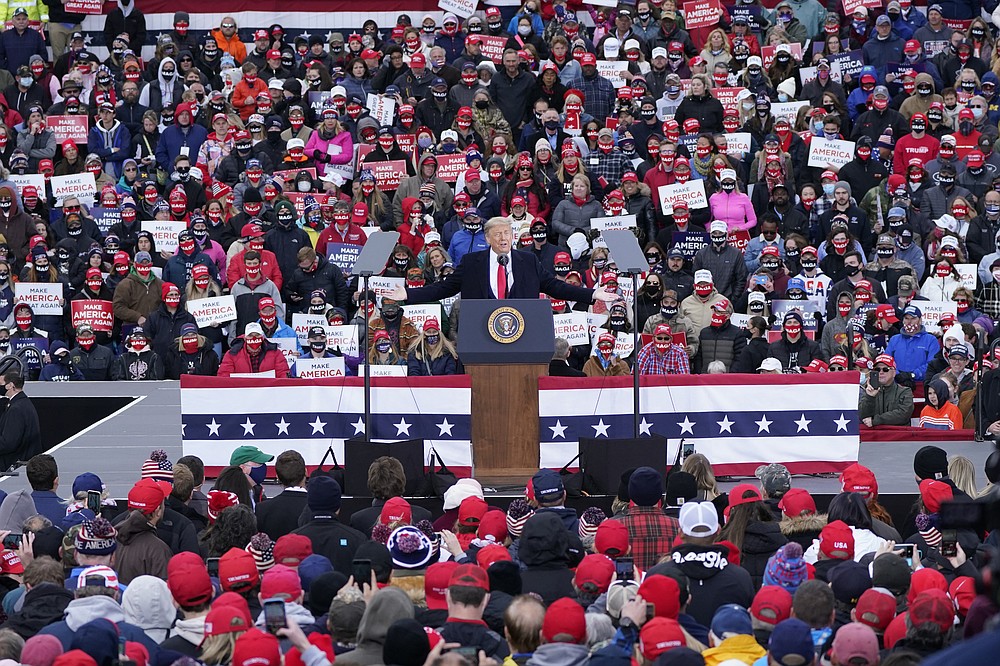 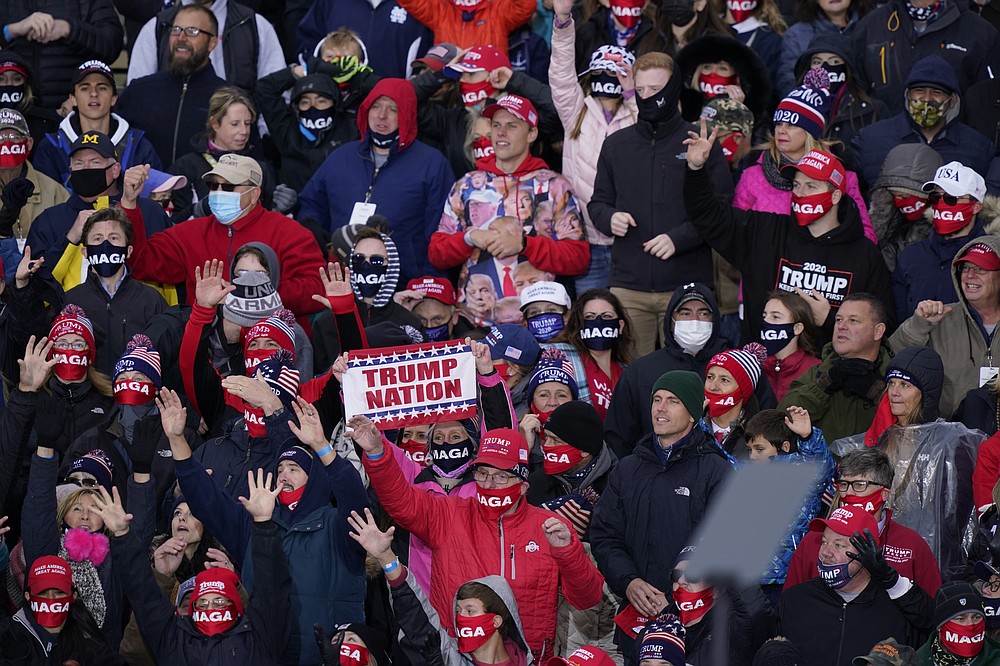 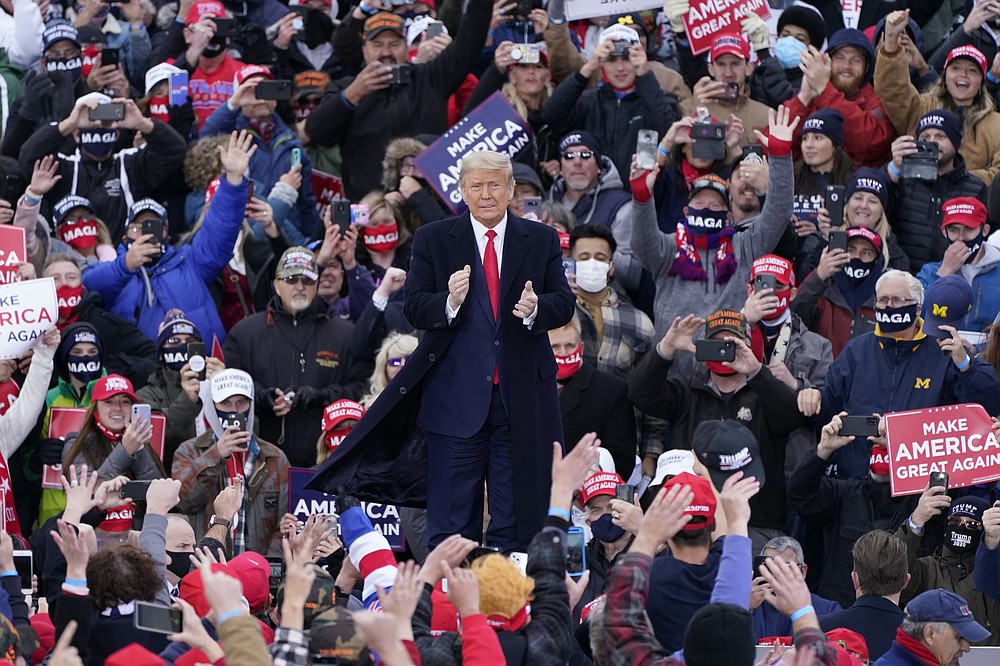 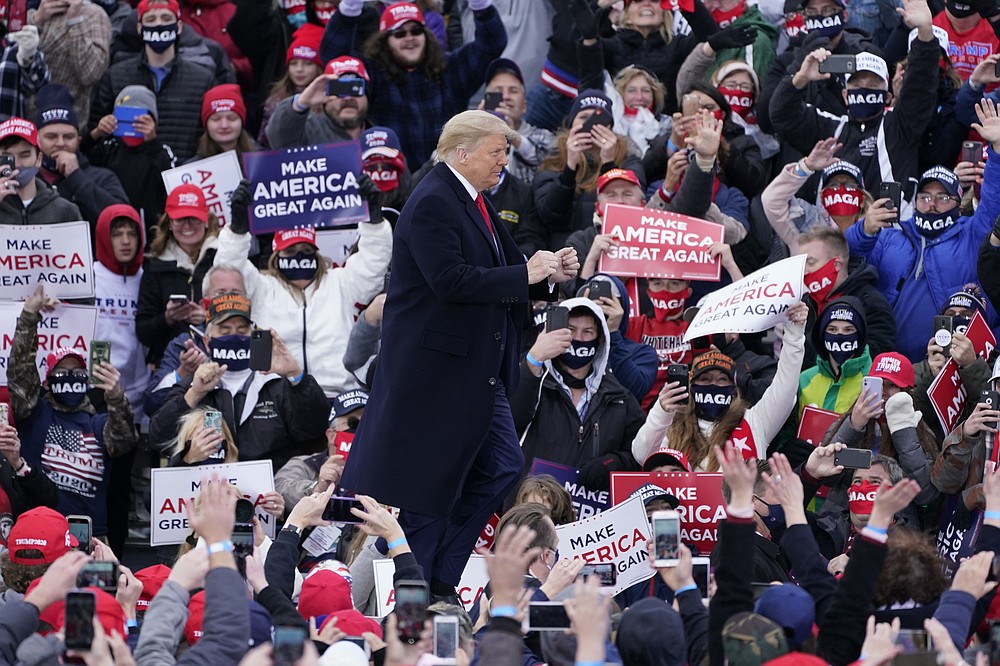 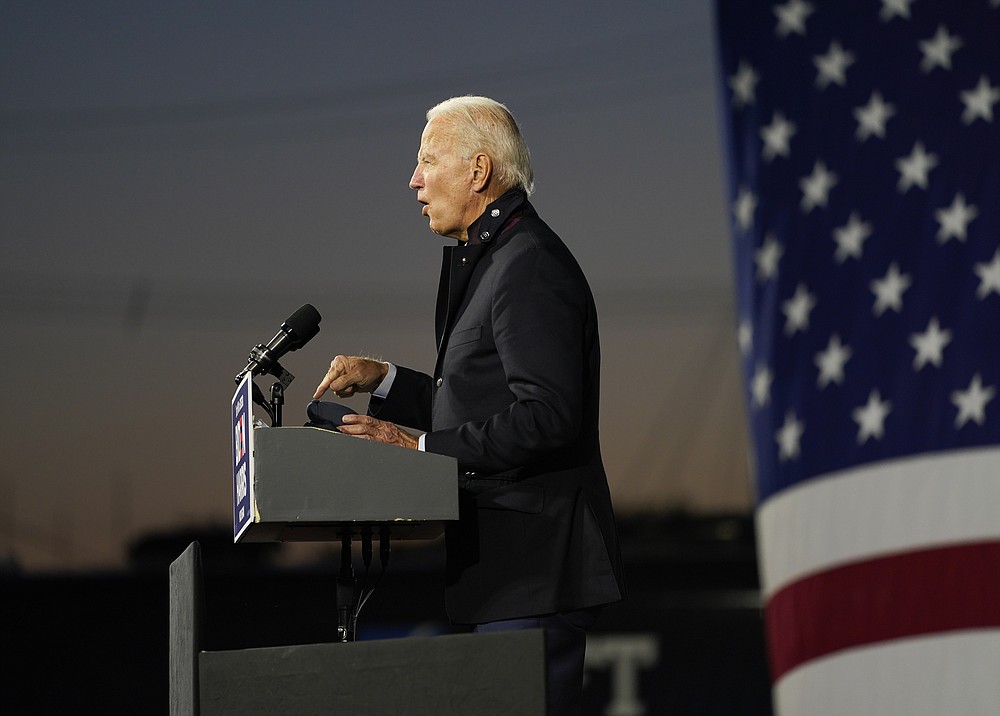