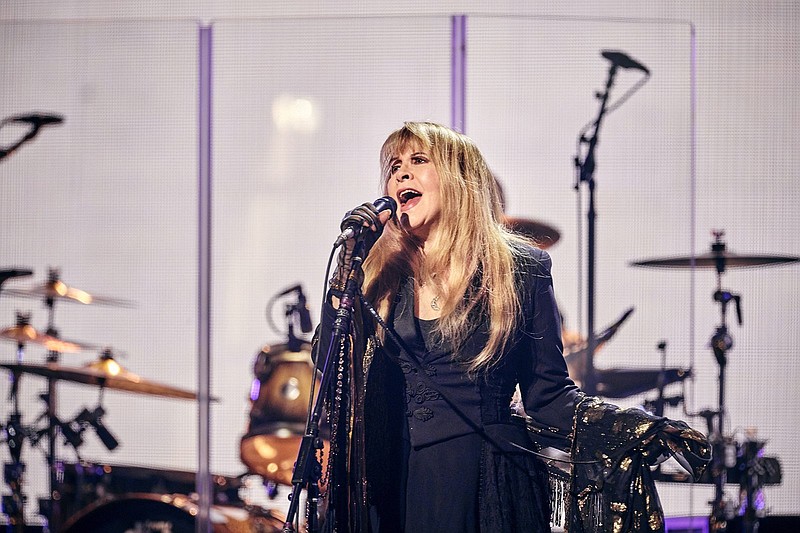 Mick Fleetwood had every right to get in on the viral skateboarding meme that's sent Fleetwood Mac's 1977 hit "Dreams" back into the upper reaches of streaming charts recently.

It's Fleetwood's drum roll that opens the soft-rock classic from the band's Grammy-winning, mega-million-selling "Rumours" album — as instantly identifiable a percussive flourish as John Bonham's bone-rattling intro to Led Zeppelin's "When the Levee Breaks" or Phil Collins' epic beat-drop from "In the Air Tonight."

But anybody who knows "Dreams" — which took off online after a TikTok user with the handle Doggface208 posted a clip of himself skating to the song while guzzling from a full-size bottle of cran-raspberry juice — knows that it really belongs to Fleetwood Mac's most iconic member, 72-year-old Stevie Nicks.

Written as she and her bandmate Lindsey Buckingham were ending their stormy romantic relationship, "Dreams" might be Nicks' finest showcase in a career that stretches over five decades. The lyrics, addressed to a guy going crazy "in the stillness of remembering what you had," are haunting and precise; the melody captures a couple's intimacy even as it evokes the loneliness to come.

And Nicks' vocal? To say she performs the song with an unsurpassed emotional intelligence — particularly in the verses, where she's effortlessly weaving between her husky chest voice and her fluttering higher register — is still to underplay how deftly she conjures the complicated range of feelings involved in a painful yet necessary breakup.

"Now here you go again/ You say you want your freedom," she sings right at the top, and already we're knee-deep in these people's messy personal history. "Well, who am I to keep you down?"

That Nicks does all this while also sounding impossibly cool makes it small wonder that folks are using "Dreams" as a soundtrack to their cute little cranberry-juice videos.

After Doggface (real name Nathan Apodaca) set off the craze late last month, copycat clips have proliferated from a soldier in a helicopter, a dude wearing a jack-o'-lantern on his head — and Mick Fleetwood, 73, who apparently joined TikTok just to post his take on the meme.

Somebody even made a "Dreams" video starring a digitized version of the fly that landed on Mike Pence's head during the Oct. 7 vice presidential debate.

The viral trend has put Fleetwood Mac's late-'70s hit — the superstar act's only No. 1 on Billboard's Hot 100, inside the Top 10 of the U.S. Top 50 chart on Spotify, where "Dreams" has been racking up nearly 900,000 daily streams. That's more than the latest singles by Shawn Mendes, Justin Bieber and BTS.

This isn't the first "Dreams" revival. In 2018 the song entered Billboard's Hot Rock Songs tally thanks to an earlier meme involving a women's dance squad at Alcorn State University. Before that, the Irish sibling group the Corrs went to No. 6 on the British singles chart in 1998 with their cover of the tune.

"Dreams'" endurance speaks to our continued fascination with Fleetwood Mac and especially with Nicks, who made headlines with an interview she recently gave The Times in which she discussed her fear of covid-19, her friendship with Harry Styles and her thoughts on Buckingham's being booted two years ago from the once-crusty blues band the two helped transform into a global pop phenomenon.

But it's also about the specific magic of "Dreams" itself, which feels as fresh today as it did 43 years ago. The plush yet neatly arranged song uses remarkably few moving parts to bring to life what Nicks calls her "crystal visions."

That sparseness may have been the result of the speed with which Nicks wrote "Dreams." As she was quoted saying in Blender magazine in 2005, the singer dashed off the song in a small studio at the Record Plant in Sausalito, Calif., while the rest of Fleetwood Mac was working on a different "Rumours" song in the main room.

"I sat down ... with my keyboard in front of me," she said. "I found a drum pattern, switched my little cassette player on and wrote 'Dreams' in about 10 minutes." When she showed it to the band, Christine McVie evidently judged it "boring" at first. Yet something alchemical happens in "Dreams" — cool heats up, time slows down, boring becomes mesmerizing.

"Like a heartbeat drives you mad," Nicks sings with a mix of sorrow and resentment, and indeed it sounds like the song could go on forever.

Which it pretty much has — not only in covers and TikTok videos but as the inspiration and the raw material for other tunes. Listen to "Dreamworld," a wistful-sensual 2007 cut by the beloved LA indie-rock band Rilo Kiley, or "Walkin' 'Round in a Circle" by Jessica Simpson, who rightly cut Nicks in as a co-writer on the barely remembered (but kind of great) selection from her own divorce album, 2006's "A Public Affair."

In 2016, Post Malone remade "Dreams" on a mixtape from the perspective of the player who only loves you when he's playing.

"Stevie Nicks is dope," Malone said. "There's so many hip-hop and R&B melodies in those songs that you could incorporate into a hip-hop track."

Even before Doggface, Fleetwood Mac was doing what it could to extend "Dreams'" long tail, issuing a plethora of live recordings and alternate takes of the song in recent years, including a stunning studio outtake from the "Rumours" sessions that reimagines "Dreams" as a gorgeous psychedelic soul ballad.

There are no drums in this version — just Nicks' slightly scratchy vocal, a pulsating electric-piano lick and Buckingham noodling around on guitar behind the tender condemnations of his soon-to-be ex.